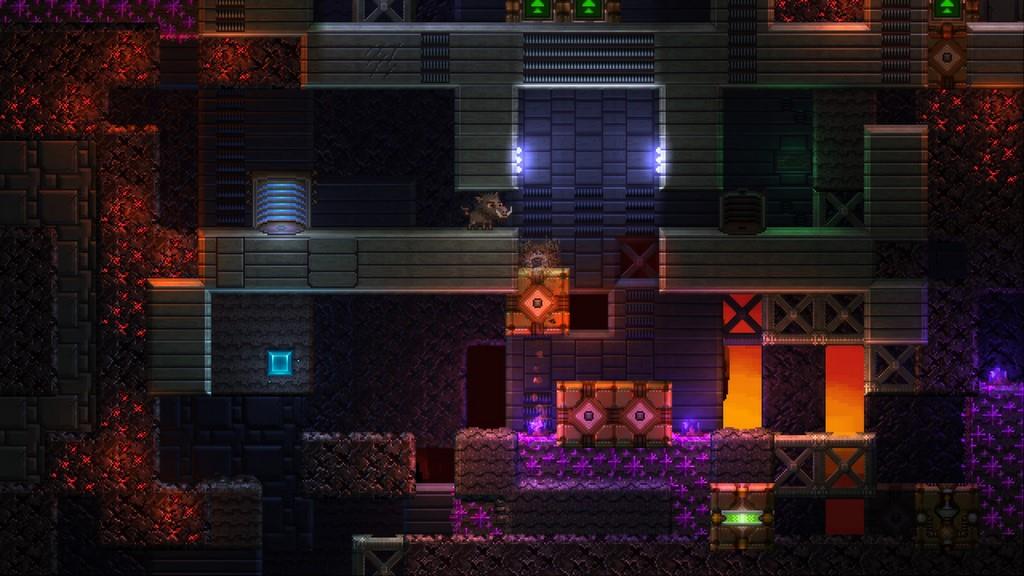 Puzzle games come in all different shapes and sizes, from simple games like Tetris and Dr. Mario to something a little more complex like Life Goes On. Games like Life Goes On are rather straightforward. Just get from point A to point B and you’re on to the next stage.  Then you have puzzle games which also mix in some exploration, and Full Bore falls into that category. Let’s take a look and see if a puzzle game can handle a formula that’s part exploration and part linear.

The story of Full Bore is rather simple. You’re walking through the meadow one day and, for whatever reason, the ground below you collapses and you fall into a cave. After wandering around you come across a rocket that shoots you straight up into the air and you eventually crash in what looks like a vault. When you exit you’re accused of stealing gems out of the vault, but since you’re a boar you don’t have any pockets so obviously you hid them somewhere since, you know, they obviously have proof of what you didn't actually do.  Anyway, as punishment you’re forced to dig in the mines until you find and replace the gems you supposedly took. As you progress, you begin to uncover more to the story via various research PCs you’ll come across that make you think there might be more going on here than you originally thought.

As the game starts out and you fall into the caves, you learn really quickly how the game works. You can climb up boxes and terrain that’s one block higher than you as well as break through dirt and various blocks and boxes. Basically the game teaches you its mechanics within the first few minutes. After that you’re on your own to explore the mines and see everything they have to offer. Along the way you will find gems hidden in dirt and blocks. Collecting the gems seems to be a secondary goal as I’ve been able to proceed without collecting every gem I find. Also, in case you’re like me and get confused by this, gems can’t be collected more than once, but they will reappear when you reenter an area. Gems you’ve already collected will break when you dig them up to signify that you’ve already collected them.

While a lot of the game revolves around exploration, make no mistake that this is also a puzzle game and that a lot of the digging you end up doing in the various rooms have to be done in certain ways to achieve your goals, especially if you’re going after all of the gems. Thankfully if you mess up you can either just leave and reenter the room or you can actually rewind time back to the prior checkpoint. What’s weird is that not every individual action can be taken back on its own, so to speak. For instance in one room I moved several blocks around and dug up a few, then realized I had to back up a bit since I did something incorrectly, but when rewinding my actions it kind of skipped over the action I wanted to stop at and went a few actions beyond. It’s hard to explain without seeing it in action and wasn’t a major issue, just bit of an annoyance. Still, the rewind feature is quite useful.

There’s not a whole lot in this game that I didn’t like. Aside from the aforementioned issue with rewinding time, it took me some time to realize that collecting the gems isn’t mandatory. It was driving me nuts trying to obtain every gem I came across. It took some time to realize that, as stated earlier, when you collect a gem and reenter that room, the gem reappears but crumbles when you try to collect it again. After going into a room I hadn’t entered since the day before when I last played and seeing a gem crumble, I thought I just couldn’t get that gem until something happened later on. When I finally realized how that situation worked it saved me some time when I began remembering what gems I had already collected prior and didn’t have to waste anymore time going after them again.

As an exploration-puzzle game, some of the best advice I can give is to look everywhere. Early on you have to find something called a samoflange to progress. This took me forever to find, to the point I actually looked up a YouTube video and kind of face-palmed when I found the solution. If you can’t figure out where to go, try digging in spots where you normally wouldn’t because they might be out of the way or in an area in which you think there’s nothing there. This only kind of bothered me as it was still towards the beginning of the game, and one would think that something so well-hidden would be towards the later parts of the game. Again, not a major complaint, just a puzzling one. 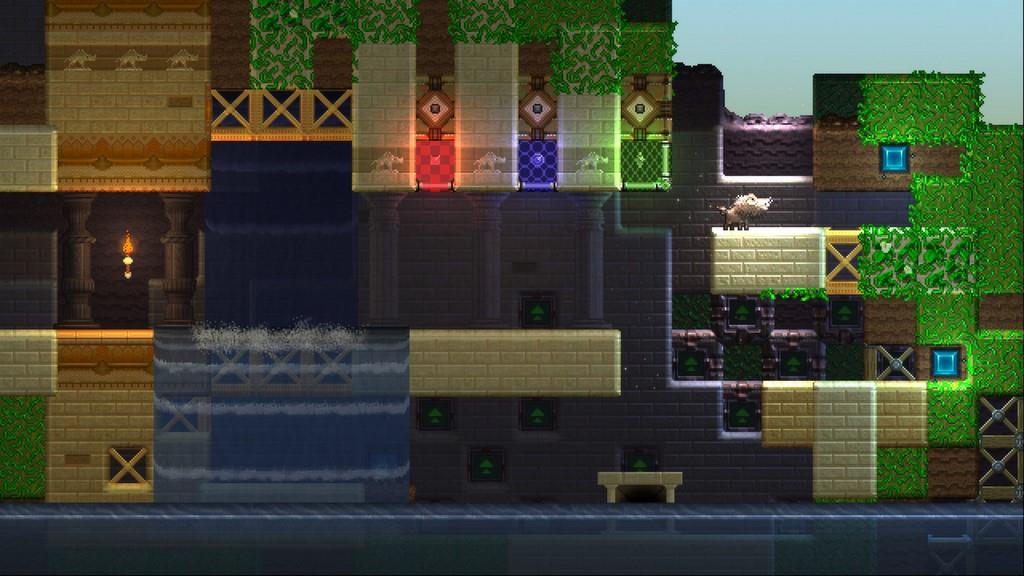 While a lot of the puzzles can be bypassed, they can actually be pretty challenging, even in the early going. You have several different block types, from bricks that take several hits to break, to sand that will crumble if you even step on it, to blocks that will fire a laser and destroy other blocks in front of it when activated, and a lot of stuff in between. Knowing how these blocks work is essential and even more so when finding the gems and secrets. The puzzles can range from being so easy that you’ll find the solution in seconds to those that’ll have you sitting there for a few minutes racking your brain to figure it out. I’ve had a couple that I initially thought were downright impossible (I knew they weren’t, but a lot of gamers have that “This is impossible!” moment now and then), but when I finally figured out the solution it was pretty awesome…and also made me face palm again. 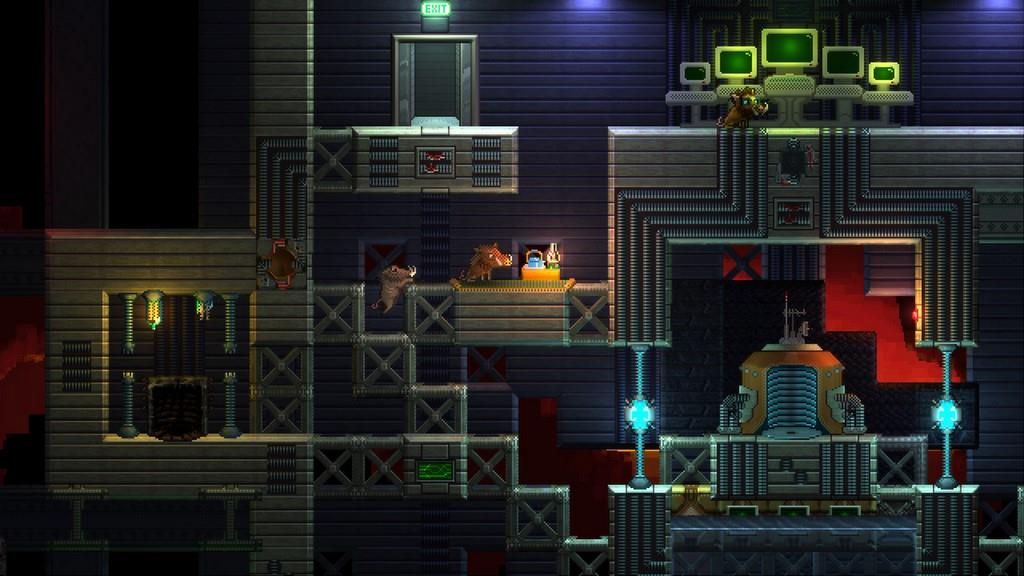 I’ve seen a couple other people use the term “Metroidvania” with Full Bore and I kind of have to agree to an extent. There is a lot of exploration to do and you will be backtracking quite a bit. At several points you’ll find a shrine that’ll take you to a cavern that acts as a warp zone of sorts, allowing you to access any shrine you’ve already found and lets you easily warp to various areas. This is very useful if you want to go back to prior areas and finish collecting gems. In fact, due to how the areas are designed, this might be the only way back to older areas without a ton of walking.

Finally, Full Bore has something that I like in these types of games: an auto-save system. Now you might be thinking, lots of games today have an auto-save system.  True, but some of those games will auto-save your stats and items, but not your level progress and you must manually save for that. For instance, Borderlands 2 has checkpoints all over the place that will save everything you’ve done, but when you quit and restart you start at whatever fast-travel station you last used, not the checkpoint in which you stopped. In Full Bore the game auto-saves basically whenever you enter a room, so it’s nice for playing in short bursts since you can restart in whatever room you stopped on.

Full Bore is fun one once you get into it. I spent the first couple of hours wandering around trying to get gems that weren’t required and attempting to find a samoflange—whatever that’s supposed to be (seriously, I remember reading somewhere that the developers didn’t know what a samoflange was either)—in a hidden area I couldn’t find. Once I figured all of that out though and started moving onto other areas, the game got more enjoyable. It would have been nice if more puzzles were placed in areas in which you have to travel to progress the story, but the puzzles that are in the game can range from pretty basic to head scratching. If you like puzzle games mixed with some exploration, give Full Bore a shot.

Full Bore is an enjoyable game if you don't mind puzzles that range from simple to difficult within a few minutes of each other. While it's nice to play in short bursts thanks to the auto-save system, it would have been nice if the puzzles in the main areas were a bit more challenging, as that's where you'll spend most of your time if you don't go after every gem. Beyond that, though, Full Bore is a pretty solid game.