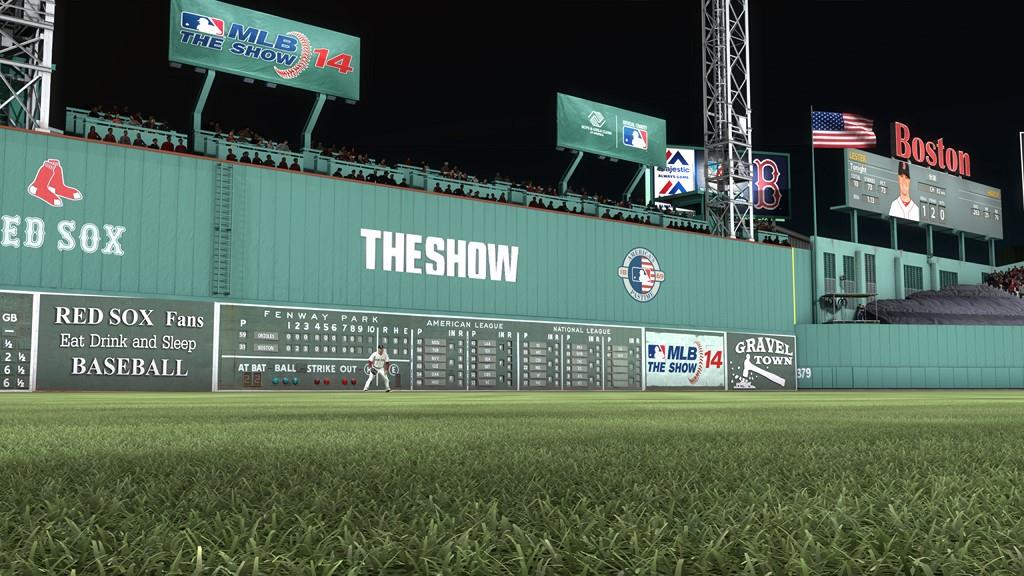 On the PlayStation 3, the MLB The Show series has been one solid entry after another. With the launch of the PlayStation 4 last November, I was anxiously awaiting the series to make the leap to the new console. While it came out a few weeks after the baseball season started, MLB 14 The Show has finally been released on the PlayStation 4 and the game’s still as fun as ever, but it does have some issues.

San Diego Studio has rebuilt the interface from the ground up for Sony’s latest console while keeping what made the series so popular.. There isn’t any feature missing from the PlayStation 4 version so anything you loved about the PlayStation 3 version, it’s all right here as well. Want to just manage games? You got it. Want to play only the important parts of an inning? No problem. Feel like messing around with the farm system? Go ahead. The wide range of options makes MLB 14 The Show a game that can appeal to a wide range of baseball fans, from the casual to the hardcore.

So, with the move to the PlayStation 4 the game should look really great right? It does and San Diego Studio has gone and increased the texture quality and the resolution for the game. Player movement’s are smooth and transition well from one motion to another. I love how diverse the crowds are now and it’s hard pressed to be able to find duplicates without looking really hard. The stands truly come alive with the amount of different crowd animations and characters there are.

Attention to detail is one thing the folks at San Diego Studio is great at. Many little touches make MLB 14 The Show such a visually great baseball game and I’m not just talking about graphics fidelity. For example, on one of my foul ball hits to the left side of a small AA park, I saw a fan try to reach for the ball as it careened off the wall and tumble head first onto the field. It’s like something you would see on ESPN’s Not So Top 10 plays of the week and there it was, in the game.

Each stadium looks absolutely stunning as they are modeled incredibly well. I’m most familiar with Progressive Field in Cleveland and it was great to see how accurate they portrayed that stadium. Even the smaller minor league stadiums looked great. San Diego Studio did a wonderful job at capturing the nuances of each stadium making it feel like you are really there when playing.

Of course, it goes without saying that MLB 14 The Show has some fabulous presentations in all areas. From the great commentary that doesn’t repeat to how the game’s presented to you through various camera angles and transitions, the folks at San Diego Studio knows exactly how to make baseball look good. It rivals a lot of major networks on how they present the game. I actually found myself enjoying watching others play the game and I wish there was a way to remotely watch a friend play their game as well.

One of my favorite features of the game is Road to the Show. This is where you start out as a minor league prospect and work your way to the majors. This year’s version has some good improvements to it. You start out with three exhibition games and then get drafted by a MLB team. If you don’t like the team that drafted you, you can go back to college and come back sometime for another three game exhibition to show the scouts what you are capable of. Of course, this will make you age some and decrease your longevity in the minors and majors but you’ll have some better initial stats to begin with.

I really like how you have a few games to increase or decrease your draft stock. It adds another layer to working your way into the majors as there’s no assumption made you are a good prospect. 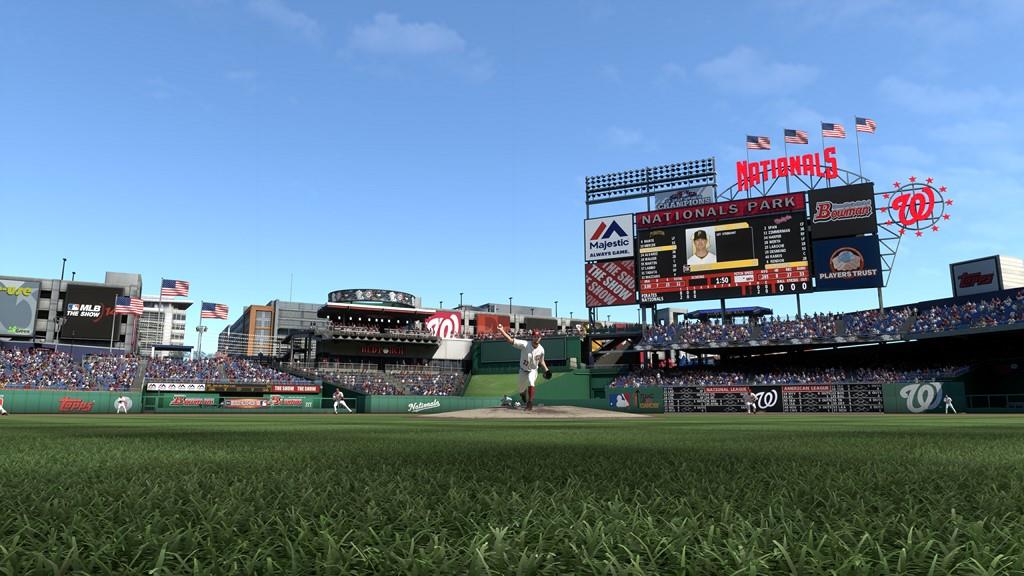 I’m also happy to see them remove the goals that were needed to be accomplished in order to train your player. Now, it’s just earn points based on your performance and allocate them to certain areas of your player. It’s a lot less frustrating experience and it takes into account your overall play with each game in order to determine if you should get more or less points to increase your player’s attributes.

The cost of upgrading a player’s attribute is now weighted to make maxing out a player much more difficult. As your skills get better and better, it takes a lot more points to increase that specific skill. While it might cost a few dozen points to increase a low level skill, it might take hundreds for skills in the 90s to increase even a single step. You’re going to have to work hard if you want that “perfect” player ths time around.

Being called up or dropping down into the minors now happens at any time. Like in real life, there’s not a schedule for these events to happen. While not likely to happen, there’s a chance you can go from AA straight to the majors. WIth MLB 14 The Show, this now makes it a more dynamic event and one that can be a nice surprise or an unexpected disappointment. 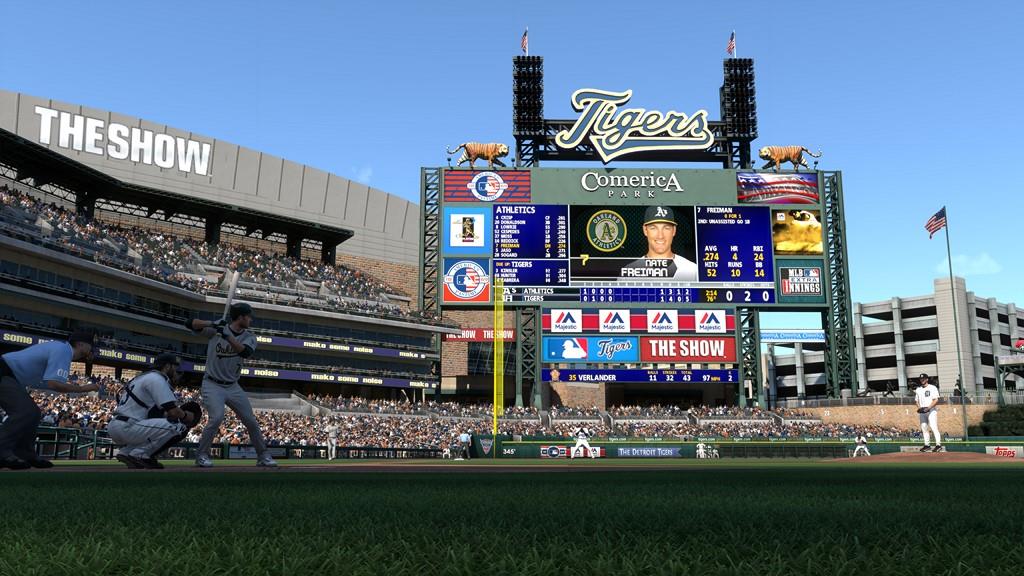 Road to the Show was always a nice way to play many games in a short amount of time because of only interacting with the game when you were at bat or when a play involved your position. MLB 14 The Show has streamlined catching if you decide you wanted to be a catcher as now you only need to call pitches when runners are in scoring position. Oh, you have to catch the ball as well so it’s a little more involved than previous years.

Some of the features that are in Road to the Show has made it to other parts of the game. You can now do the player lock and quick count options that are present in Road to the Show in nearly every other game mode such as Exhibition and Season. You can get the same full baseball experience in an abbreviated fashion to make the games quicker if you so desire. I know sometimes I don’t want to play a game and see every single pitch or at bat so this is a great way to get through some of the more boring parts of the game yet still participate in important events or events pertaining to a player you have locked on. 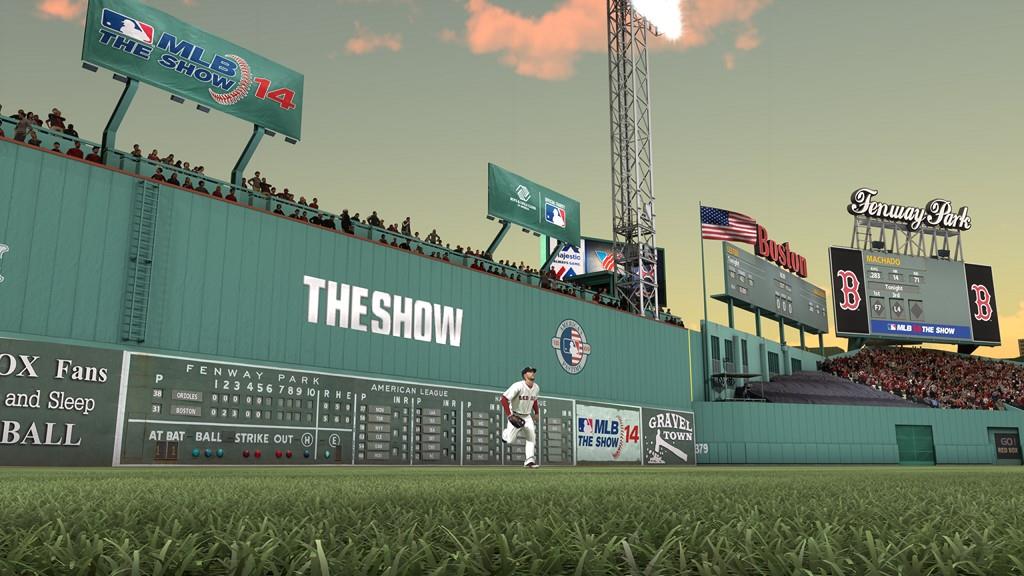 But, that’s not to say everything’s great about the game. There are a few problems that hold this back from being an absolute gem.

Playing some online games, I found the experience to be a mixed bag. During batting and pitching, the game was OK with the occasional missed batting animation where you’d hit the ball but not see the batter swing. Fielding had all sorts of random effects where players on the team you were facing would vibrate back and forth or teleport making it hard to know exactly what your opponent was doing and if they fielded the ball cleanly. It was far from a smooth experience, but I hope San Diego Studio can fix this in future patches as I’d love to play MLB 14 The Show online more.

For some reason there, there are many times the game does stutter. Now, this is mostly during transitions to other cameras in presentations and sometimes during gameplay.  When changing views or showing highlights between plays, the performance does take a hit occasionally. Considering it’s running on new hardware, one would think the game would be a lot smoother in all areas. But, perhaps the increase in fidelity and being the game is only in its first year using the brand new hardware has caused it to not be as optimized as it could be. The subpar performance in some areas is a tad bit disappointing though. 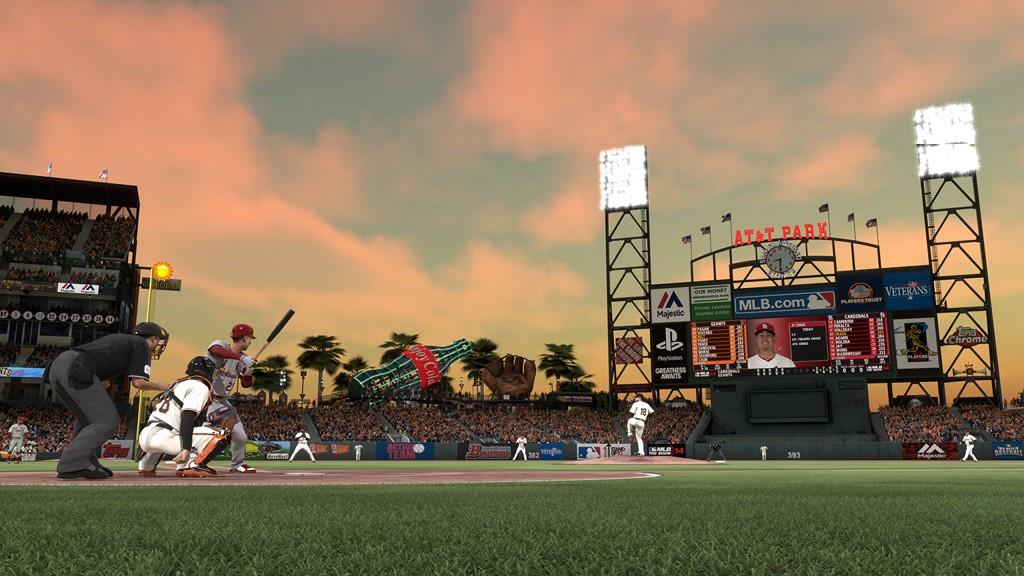 Another annoying aspect of MLB 14 The Show is the long load times. It’s not uncommon to sit for 30 seconds or more between games. It’s one of the few things I don’t enjoy about the game since I have to wait a long time to get into the action. Baseball’s already slow enough at times so the long load times isn’t something I really enjoy sitting through.

The initial install took a good half hour or so and in that time you can’t play it at all. If a stadium is not loaded, and it seemed in my install that it took until 20 minutes to load one in, your only option is to move around in the meus. Granted, this will only happen on the initial install of the game, but don’t expect to jump right in after you purchase the disc version.

When it comes down to it, MLB 14 The Show is still a great baseball game with some flaws. Road to the Show is still as addicting and fun as ever and that’s the mode I’ve spent most of my time on. There are plenty of other options as well such as leagues and playoffs, both off and online. Home run derby is a nice diversion when you want something quick to play. The amount of options available and play styles such as being strictly a manager or taking control of every aspect of the game makes MLB 14 The Show an almost complete baseball game for the PlayStation 4. There’s still plenty of room for improvement and I hope San Diego Studio fixes some of the prevailing issues, especially in the online area.

MLB 14 The Show is a great baseball game marred by long load times, inconsistent online play, and performance issues. It's still a fun game and Road to the Show is, as usual, a great way to play the game. Fans of baseball will enjoy the game, but it's a little disappointing to see the performance issues.