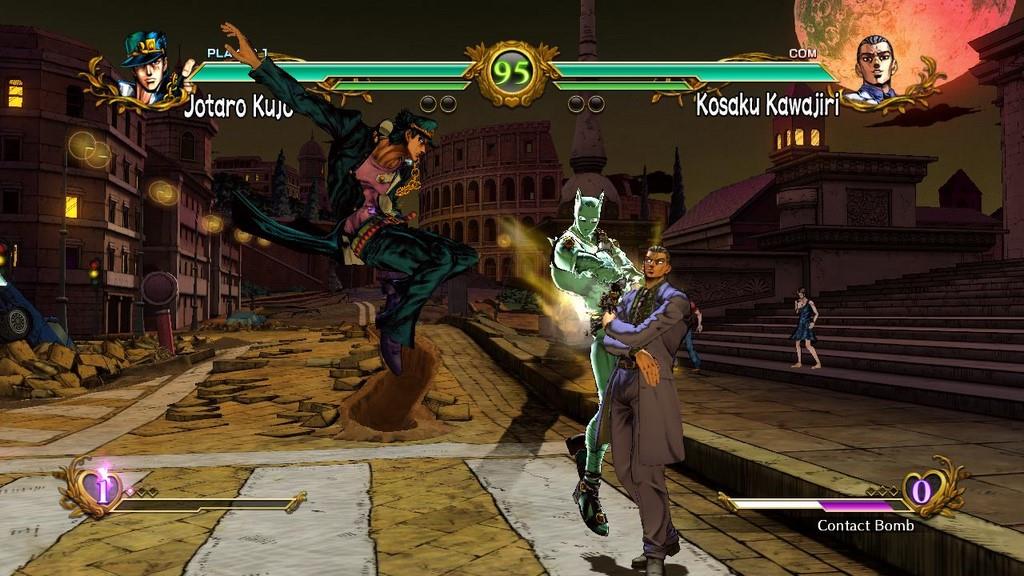 In all my years playing fighting games, I have never been more baffled than I am with JoJo's Bizarre Adventure All-Star Battle. I figured I was prepared; after all, I played my share of JoJo's Bizarre Adventure HD Ver. But even with my extensive history with the genre and basic knowledge of the series, I still wasn't prepared for the craziness that came spitting out of my television screen. Even as I sit here writing this review, I'm still not sure what to make of Namco Bandai's newest fighting game.

Playing JoJo's Bizarre Adventure All-Star Battle made me better appreciate other games based on niche licenses. Not only are these games designed for the die-hard fans, but also people who have never even heard of the source material. Some games offer a brief recap, while others create a brand new protagonist to help ease the player into the universe. This particular fighting game does absolutely nothing to shepherd the player through a complicated world full of different generations and dimensions. JoJo simply throws you into the deep end and hopes you know how to swim.

If there's a reason why the developers chose to keep new players at arm's length, it could be because the original manga is equally impenetrable. Originally created three decades ago, JoJo's Bizarre Adventure tells the story of the Joestars. Spanning several generations, we see things play out for the descendants, both good and bad. But then it introduces an alternate universe and everything quickly spirals out of control.

As compelling as that synopsis sounds, I wouldn't want to be tasked with turning it into a concise (let alone coherent) fighting game. Developer CyberConnect2 doesn't shoot for concise or coherent, instead choosing to fill in the story with page after page of mind-numbingly boring exposition. Don't expect detailed cinemas for the major plot points, as nearly every part of this game is presented through text. As somebody fairly new to the nuttiness of JoJo, I found this to be the worst possible way to experience what should be really interesting stories.

Worse yet, none of the stories helped to explain all of the weird (often out-of-place) allusions to Western pop culture and very specific rock musicians. It often feels like the Fukuoka-based developers were simply pulling American references out of a hat and filling in the script like a Mad Libs book. I found the whole thing not just baffling, but entirely disconcerting. 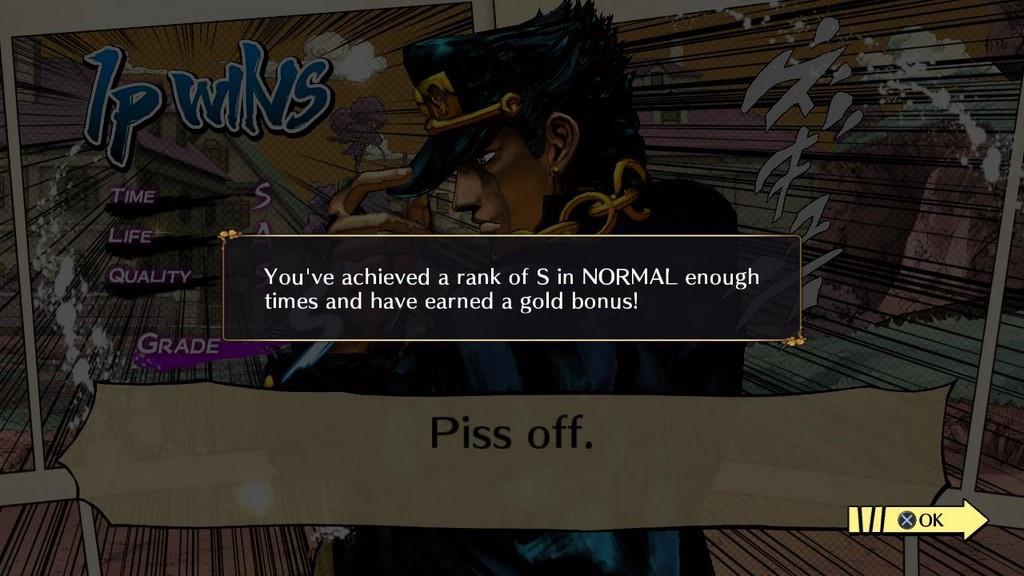 Eventually I came around and learned to stop hating and accept its randomness. Perhaps all this makes sense to the die-hard fan who has read thirty years of JoJo comics, but there's an equally good chance that it's an assortment of random elements that are supposed to leave me scratching my head. And like a Luis Bunuel film, I let go of wanting to understand what was going on and embraced the absurdity.

JoJo's Bizarre Adventure All-Star Battle may not be as deep as Street Fighter II, but it's a big step in the right direction when compared to Dragon Ball Z and Saint Seiya: Brave Soldiers. This is not the one-button masher I was expecting. Instead, we're given a slightly deeper system that not only offers a series of incredible attacks, but also different fighting styles. Couple that with characters that are actually unique and interesting, and you have the best anime game Namco Bandai has ever published. 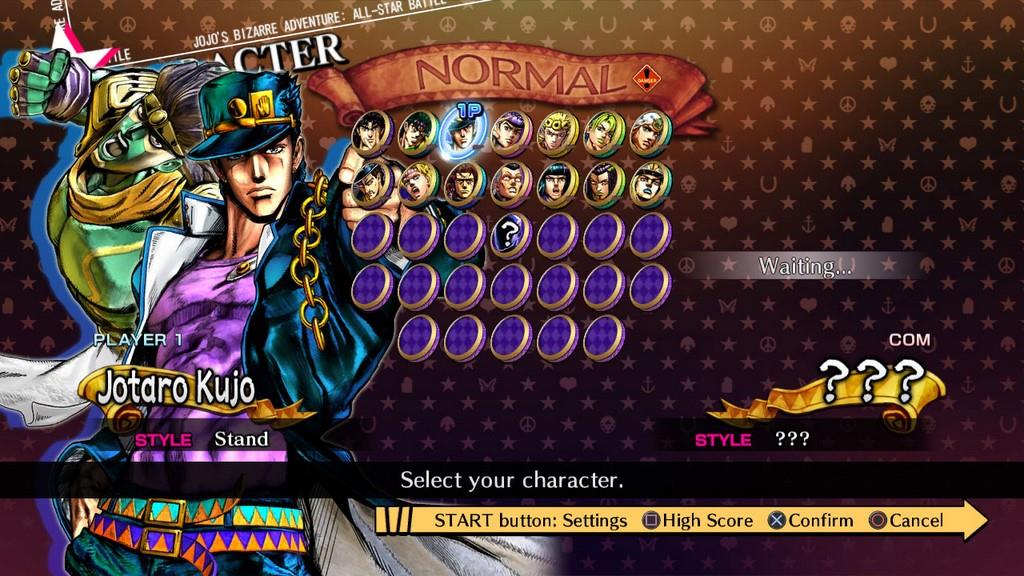 Even with dozens of playable characters (many of which you'll need to unlock), I never felt like JoJo's Bizarre Adventure All-Star Battle was cutting corners to pad the roster. Every character is unique, with radically different special moves and fighting styles. Some characters have what is called a Stand, which is a supernatural character who tags in on the action. Other characters are forced to use their weapons or, in the case of a couple characters, their horse. And while the characters are still shallow when compared to other modern fighters, I was impressed by the overall variety.

This is in stark contrast with many other anime fighters published by Namco Bandai. Those Dragon Ball Z games may boast more than sixty characters, but there are countless repeats and palette swaps. Worse yet, most of those sixty characters play exactly the same, with near identical special moves. Thankfully that isn't the case with JoJo's Bizarre Adventure All-Star Battle. 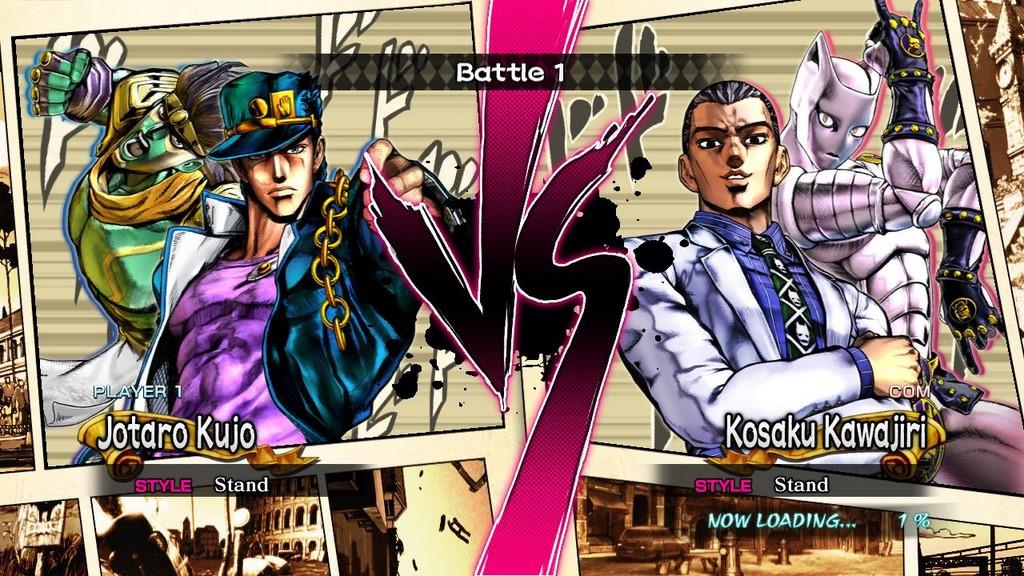 In order to unlock the hidden characters, players will need to fight their way through several different types of game modes. You may think choosing a single-player mode would be easy, but even the menu in needlessly complicated. There's the arcade mode, which sees the player fighting eight consecutive battles against the computer. Then there's the story mode, where the story of JoJo is explained through page after page of text.

Eventually you'll discover JoJo's campaign mode, which takes a little getting used to. Played out through different online seasons, this mode sees you starting with ten blocks of energy, which are used to find opponents to fight. Defeating these challengers will earn you new items, taunts, poses and more. Deplete your stash of energy blocks and it's game over. The good news is that it's usually easy to replenish your energy. Unfortunately, the game also allows the player to purchase more energy using real-world money, which feels out of place and gross. 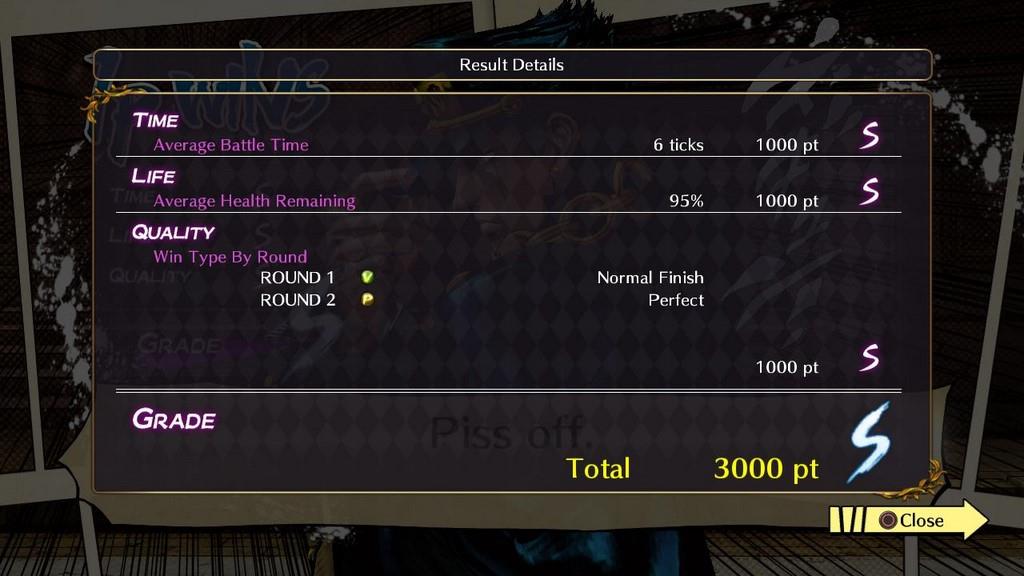 Visually, JoJo's Bizarre Adventure All-Star Battle is something to behold. While it's not the prettiest fighting game on the market, you simply have to see these characters in action. Although they are flawless recreations from the comics, it's obvious that they are polygonal with what looks like hand-drawn textures. It looks like somebody is wearing a suit of polygons, which is both mesmerizing and creepy. This art design also helps sell some of the insane style moves.

For all the things I genuinely like about JoJo's Bizarre Adventure All-Star Battle, there are an equal amount of things that leave me cold. I enjoyed the variety of characters, but was disappointed by how sluggish many fighters felt. I loved how over-the-top the style moves are, but hated how the story is presented. I was encouraged by the deeper gameplay, but wish the developers spent more time explaining what was going on.

When it comes right down to it, JoJo's weirdness overshadows many of its problems. Even with sluggish gameplay and a bare-bones narrative, I am still invested in the characters. Sure it has its problems and I doubt we'll ever see it taken seriously in fighting competitions, but JoJo's Bizarre Adventure All-Star Battle has enough charm to warrant the investment. Just don't go in expecting everything to make sense.

JoJo's Bizarre Adventure All-Star Battle is as baffling a fighting game as you will ever play. With a large cast of eccentric characters and some of the most stylish moves you'll ever see, Namco Bandai have finally released a good anime game. It's not without a few problems, but JoJo has enough charm to warrant taking the risk.