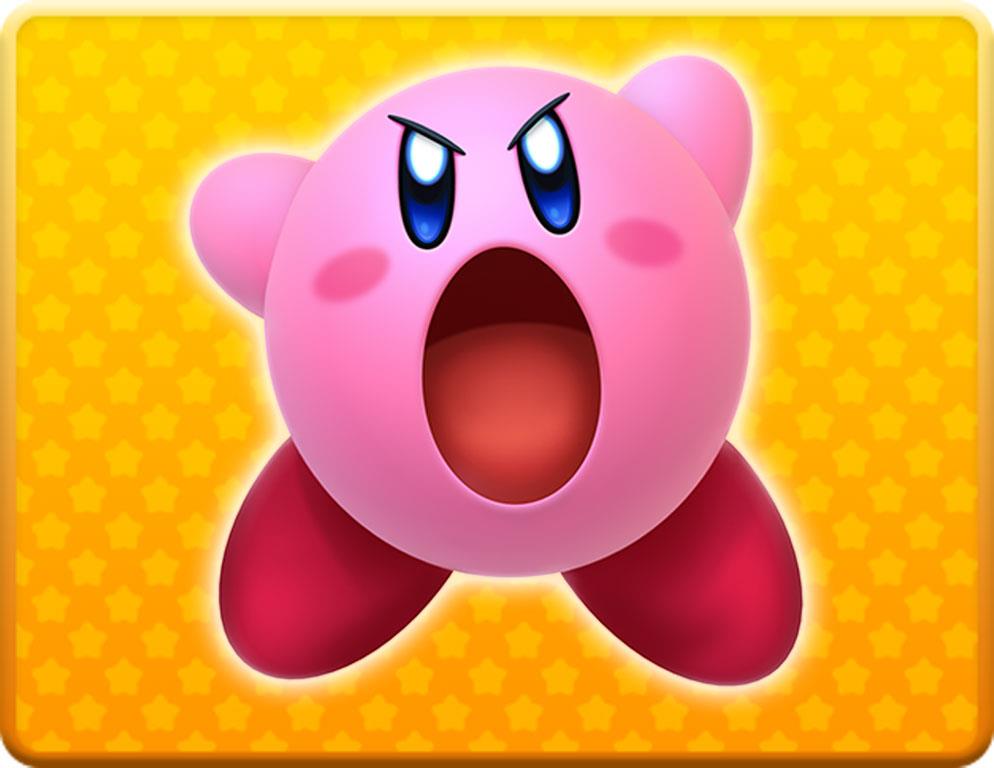 The adorable pink ball of fluff has been a part of my gaming landscape since I first slotted the cartridge in to my GameBoy. Over the years we've seen Kirby take on a number of different adventures, some less successful than others, but still loved none the less. While my personal favorite has always been Kirby's Dream Course, the platforming titles have always been an enjoyable experience, with an almost sublime mixture of gameplay, difficulty, and overall fun. This hasn't changed a bit with Kirby Triple Deluxe, as developer HAL Laboratory, Inc. continues to strike that perfect balance for Kirby's 3DS debut.

When a giant plant called the Dreamstalk displaces his home, and a strange character kidnaps King Dedede, it's Kirby to the rescue as he traverses this strange new land called Floralia that has called upon the hero of Dream Land to save them. There isn't much story exposition between chapters, but the roughly eight hour main campaign offers plenty of mystery and plenty to explore with hidden stages, branching paths, and a slew of collectables. There's over forty stages to complete and the impressive thing is that after those initial few levels that let you get the hang of the mechanics, each level feels unique and fresh. I never felt like any of the levels were meant to fill space, and the deliberate placement of items and stage elements kept the game from having moments of boredom which feels rare in a classic styled platformer these days. True to Kirby form, he'll weave his way through levels that feature constant use of stars and cannons to move between the foreground and background, stages don't feel flat, but feel dense and packed with things to see and do.

Not much has changed in terms of what Kirby can do while out in the field. He's been given a few new powers to copy from enemies, the Archer is what it sounds like, giving Kirby a ranged option to attack his enemies, along with the ability to hide behind scenery to avoid damage. Then there is a slightly stranger power, the Beetle. This ability mimics that of the horned beetle, allowing Kirby to fly and skewer enemies and toss them with his horn. These new skills fit in well with Kirby's current arsenal, and it's great to see that the developers were very deliberate in their placement. The biggest addition of all though, comes from the powerful Miracle Fruit which enhances Kirby's powers, allowing him to inhale some larger than life objects, and at times break the fourth wall in a rather cute manner. There's also something really unsettling as Kirby marches through Dream Land and Floralia, inhaling Waddle Dees and other creatures, and seeing them struggle against the physics of Kirby's giant maw drawing in the world around them, all while he wears something of a smile on his face. You can almost see it on the faces of some monsters before they meet their demise, 'Aw man I shouldn't have messed with that little pink puff ball.' Well, you did, enjoy the eternal prison that is Kirby's gut.

Visually, Kirby Triple Deluxe is a colorful spectacle that from start to finish is a sight to behold. The colorful atmosphere and fluffy clouds of Fine Fields to the space motif present in the castle of Floralia, Kirby Triple Deluxe makes the case of style over substance, and shows that good art direction can produce stellar visuals regardless of the platform. The animation throughout Triple Deluxe is also excellent, and it's the little touches that really sell things, especially when Kirby is in his Hypernova state. Even the music and sound is spot on, the Kirby theme received a few remixes and still is a memorable track. The rest of the soundtrack is really well rounded, with some elements of drum and bass, and even dubstep (bwah?!) that fit each level perfectly. 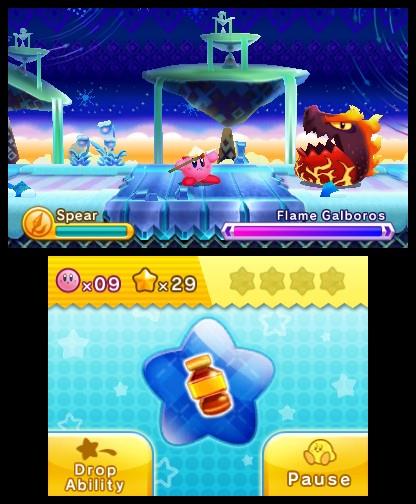 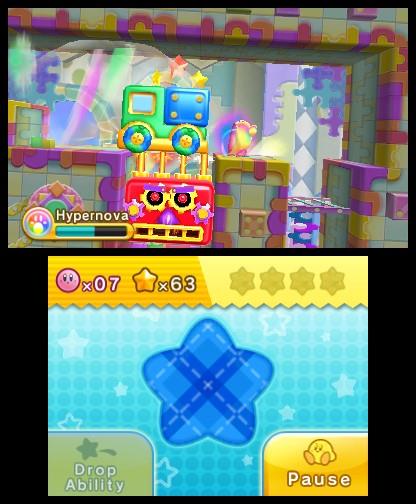 The platforming gameplay isn't something that can just be made, it requires some very precise tuning and iteration, and over the years HAL Laboratory, Inc. has got this down to a science. They have added a new collection aspect to the game in the form of keychains that represent each character in the Kirby universe along with sun stones that unlock bonus levels in each world. Collecting these items requires a little work from the player, but thanks to smart level design each collectable felt like it was never out of reach, and that it wasn't the game's fault that I failed to collect them. Even when I did fail, it didn't always mean I'd need to restart the level to try again. The bosses are a load of fun to fight, and never really feel frustrating or cheap, they just require a little bit of deft movement and memory over what previous encounters have taught you. There are some familiar faces among the bosses, but they've all been given some new abilities that make each fight feel like a fresh experience. If there's anything negative to be said about this game, it's that the game is too easy at times, not hand-hold easy like Kirby's Epic Yarn, but I never had a stage where I was having difficulty to clear the level. A few of the boss fights definitely provided a challenge, but overall, this game is fairly easy, but the gameplay is so on point, that you probably won't notice or care. 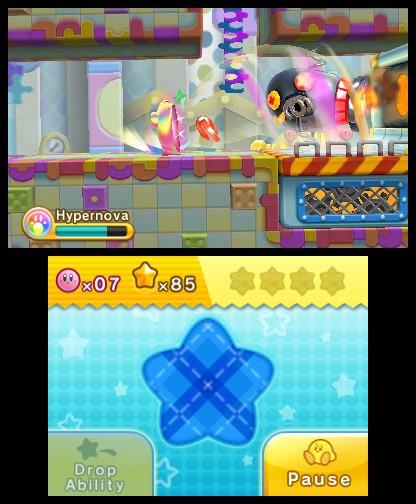 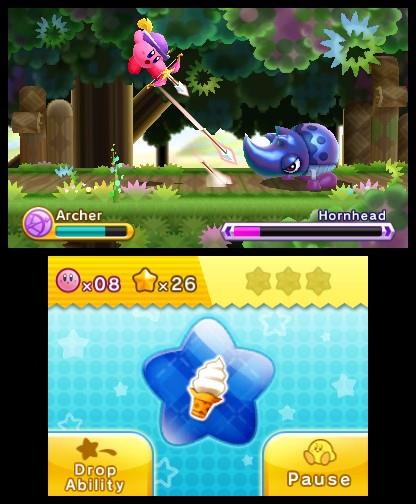 Triple Deluxe isn't just about the main story though, in fact it wouldn't be a complete Kirby game without some bonus mini-games, and this game delivers. Kirby Fighters offers gamers a small taste of what the next Smash Brothers game can be like, pitting Kirby against Kirby, allowing him to use any of his abilities to fight other players or computer controlled counterparts. Dedede's Drum Dash is a game for the musically inclined, requiring players to hop from drum to drum while keeping the beat to the music. It offers four different songs, each progressively tougher than the last and definitely offers a challenge, even to seasoned music game veterans. There are two unlockable games that are opened up after completing the game, and they offer the most post-game content. The first is The Arena, which features a boss-rush mode that will take players through every fight in the game, and award keychains for completing it. The last mode, and biggest surprise, is the Dedede Tour!, a gameplay mode that swaps Kirby for a certain king of Dream Land. I don't want to give away what you'll be doing with him, but it's definitely a nice addition. There's also a theater mode for watching the game's various cinematics, which surprisingly look like early 90's PS1 cinematics, but still manage to contain quite a bit of charm.

Kirby Triple Deluxe is pretty much everything a Kirby fan could want and then some. It's platforming perfected. It's a testament to the skills of HAL Laboratory, Inc., and shows that even after all these years the Kirby games are still a standard bearer of excellence. I went in to this knowing that Triple Deluxe was going to be great, I just didn't know that it was going to be one of the best games of the franchise, potentially dethroning Kirby Super Star. If your 3DS is collecting dust these days, then go get Kirby Triple Deluxe, you won't regret it.

You can't go wrong in picking up Kirby Triple Deluxe. This is a fantastic game that is a showcase piece for the franchise. 3DS owners need to have this one in their library.