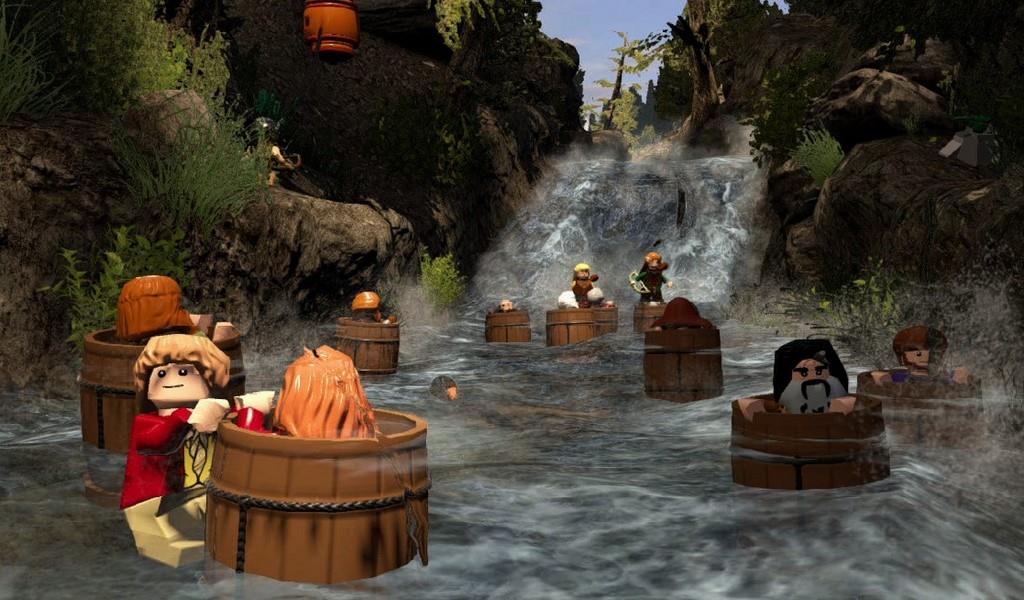 While working my way through LEGO The Hobbit, I was struck by the comments coming from my friends and colleagues. Regardless of age, sex or gaming habits, pretty much everybody I knew said they had LEGO fatigue. After Batman, Lord of the Rings, Indiana Jones, Harry Potter, Pirates of the Caribbean and multiple Star Wars entries, it's clear that the people around me are sick of the LEGO formula.

I would not consider myself burned out on the long-running franchise. The truth is, I've only played two LEGO games in my entire life—LEGO Rock Band and LEGO Batman 2: DC Super Heroes. I enjoyed both for completely different reasons, so I went into LEGO The Hobbit excited for the journey. Unfortunately, after completing this painfully dull quest, I'm starting to understand why so many people have LEGO fatigue.

As you may have guessed from the title, LEGO The Hobbit is a video game retelling of Peter Jackson's newest film trilogy. To be more specific, this is a retelling of the first two movies—An Unexpected Journey and The Desolation of Smaug. The newly renamed third film, The Battle of Five Armies, is nowhere to be seen in this package, but is promised as future downloadable content.

LEGO The Hobbit sees our hero, Bilbo Baggins, reluctantly take part in a journey across Middle-earth to reclaim his home from a dragon named Smaug. He's joined by a motley crew of dwarves with funny names like Thorin, Oin and Dwalin, as well as everybody's favorite wizard, Gandalf. Through forests, caves and white water rapids, this band of adventurers fights (and flees) all kinds of high fantasy baddies, including ogres, giant trolls and a very frightening spider. All this leads these unlikely heroes to one of the least satisfying conclusions since Halo 2 landed on Xbox.

This LEGO version does an okay job summarizing Peter Jackson's first two film installments, though much has been cut out to make room for mindless action sequences. As you might expect, we've given an abridged retelling that plays like a greatest hits of locations and scenes in the movies. To the game's credit, there are a few genuinely charming moments between the tight pack of dwarves, but they come too few and far between to make an emotional impact.

LEGO The Hobbit is split up into only a few different types of gameplay. Most of the game plays out like any LEGO release, where players frantically mash buttons to beat up baddies and dismantle the environments. Occasionally, Bilbo will run into a puzzle he'll need to solve in order to move on to the next stage. Players will also need to manage their friendly companions carefully, as each adventurer has their own skills. Some characters are big and can destroy large objects, others are able to sneak into tight tunnels because they are small, and yet another follower is able to swing on objects using his flail weapon. 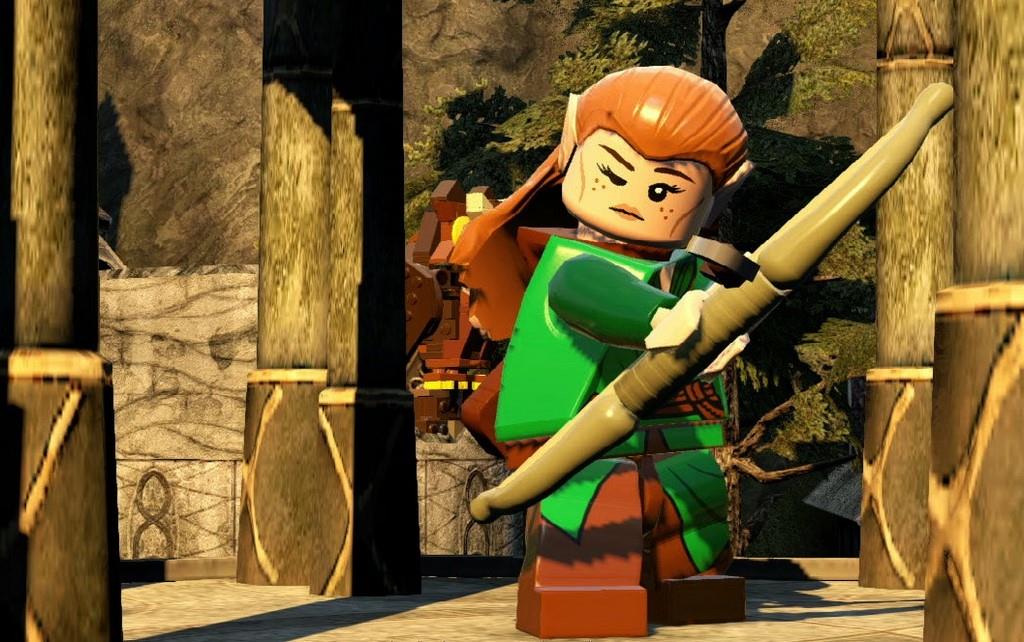 The Hobbit is at its best when the tight group of adventurers is working together to solve puzzles. Players are able to quickly switch between the heroes, each solving their own individual sections in order to advance the puzzle. One of the best examples of this involves a harrowing rescue high above the ground in the tree tops. With everybody split up, it gives each character a chance to shine. It's moments like this where the game becomes less about mashing buttons and more about teamwork.

But as memorable as those moments are, far too much of this game is mired in the most boring scenarios imaginable. There's no depth to the gameplay, so the combat is repetitive and never satisfying. And when you're not fighting the same boring enemies, the game wants you to bash the background objects in order to solve the most rudimentary puzzles. Going screen to screen bashing everything in sight just isn't very compelling, and it takes away from what should be an exciting adventure through Middle-earth.

At times it feels like this game completely misses the point of why LEGO toys are so beloved the world over. The fun of LEGO isn't the completed work, but rather building your own creations and then giving it a unique personality. The Hobbit, like so many LEGO games that came before it, isn't interested in adding the player's personality. Sure, it's funny to see J.R.R. Tolkien's world recreated with blocks and simple characters, but that doesn't do a very good job of capturing the spirit of the toys. 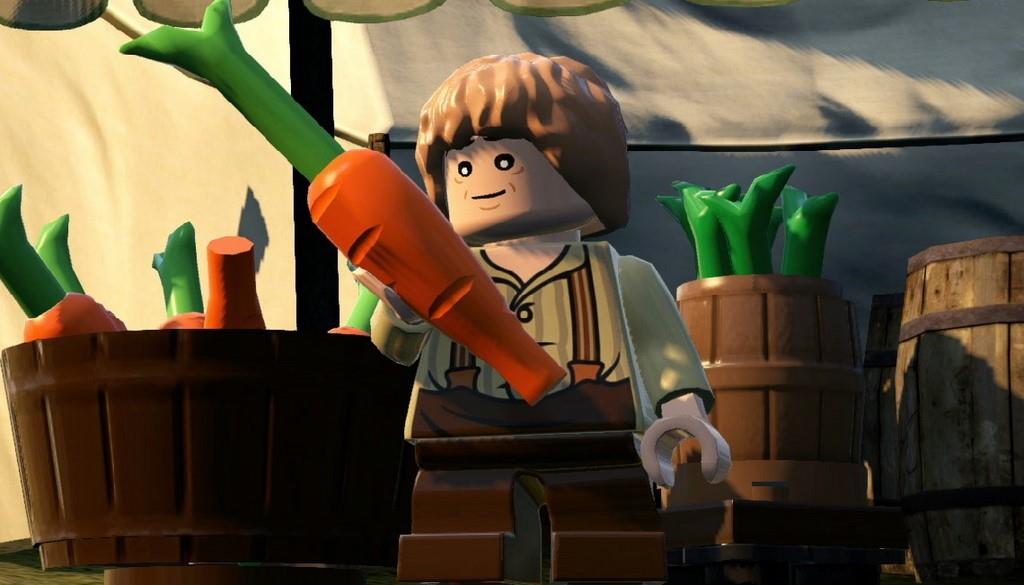 It certainly doesn't help that the characters are practically interchangeable. Perhaps this is because of the source material, but there are simply too many lookalike characters floating around Middle-earth. This isn't a problem I had with LEGO Batman 2: DC Super Heroes, as even the most Z-list comic book character had some unique quirk (or at least colorful tights). This game overloads you with nearly 100 characters, but only a handful of them are worth using.

While most of the adventure is linear, there are a few locations that are open enough to encourage exploration. There are dozens of optional quests scattered throughout the landscape, ranging from collecting rare items to killing certain bad guys. These aren't the most exciting mini-games, but it will expand the life of the title long after you've made your way to Smaug.

Although I am disappointed that this is little more than The Hobbit with LEGO clothing, I have to admit that the game often looked good and nailed the charm of the films. The music is perfect and TT Games has done a good job of capturing the large-scale assaults and huge monsters. This Xbox One title doesn't push the limits of what the system can do, but it's the best-looking LEGO game yet.

As we transition into the next generation, it's time for these LEGO games to evolve. Simply recreating a popular movie with small blocks shouldn't be enough; this is a series that needs to advance in order to stay relevant. Being able to add personality and create your own toys should be a given in a game based on LEGO. And even if you can get past these problems, you're still left with a button masher with an anticlimactic ending.

Even if you're not completely sick of the LEGO formula, you will be by the end of LEGO The Hobbit. This is a simple action game with light puzzles and an overwhelming cast of characters. It's also a disappointing retread of games you've probably already played. There are a few memorable moments sprinkled throughout this adventure, but this newest LEGO game covers too much familiar ground.