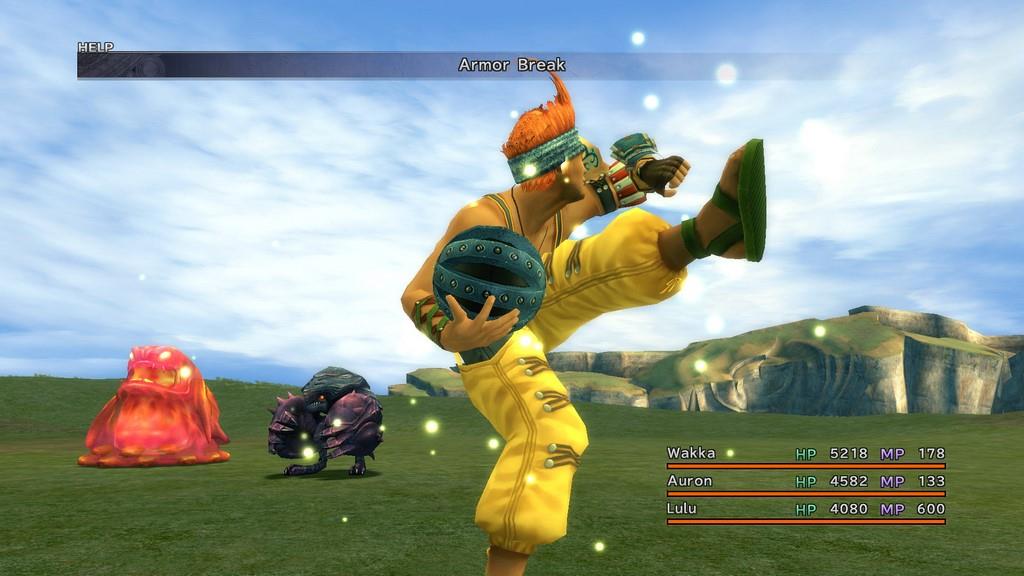 I probably didn't need to spend as much time as I did playing Final Fantasy X/X-2 HD Remaster to come to the conclusion that it's a good game. The truth is, I knew early on that this two-game compilation was worth recommending. And yet, despite having already played these games and knowing the time commitment required, I couldn't pry myself away from this collection. After more than a dozen years, I'm happy to report that Final Fantasy X remains one of the best installments in the long-running series.

Although Square is known for remaking and remastering their aging classics, this marks the first significant upgrade to any of the modern-era single-player Final Fantasy sequels. As the title suggests, this is a remastered collection of both Final Fantasy X and its girl-power sequel, Final Fantasy X-2. While not a complete overhaul of the PlayStation 2 graphics, this PS Vita compilation (which is also available on the PS3) looks incredible. It's bright, colorful and full of interesting baddies to beat up. I dare say this HD upgrade looks better than Square's most recent Final Fantasy outing, Lightning Returns.

As I mentioned, this was not my first trip to Spira. I played through Final Fantasy X on the PlayStation 2, but it's been well over a decade since I've thought about any of these characters. In fact, I quickly discovered that I had forgotten all but the beginning and end. I knew the big twists and remembered the cast of good-natured characters, but for some reason the various story beats didn't stick with me. For this reason, I was excited to have a chance to reconnect with Tidus, Wakka, Rikku and the rest of Yuna's guardians.

For those who missed out on the game in 2001 or just need a refresher, Final Fantasy X tells the story of a professional Blitz Ball player named Tidus, who gets sucked into a giant wormhole and spit out a thousand years into the future. On the plus side, Tidus wakes up in a tropical location where all the locals love Blitz Ball and can't get enough of the star athlete's moves. Unfortunately, none of this matters when Tidus discovers a sinister force that threatens to destroy Spira.

Along the way, Tidus meets up with Yuna, a High Summoner whose destiny is to battle this mysterious creature, simply known as Sin. As it turns out, Yuna is just one of a long line of High Summoners tasked with defeating this monster. It doesn't take long for Tidus to realize he has stakes in this war, so he, along with his Blitz Ball-loving buddy Wakka, join forces to help Yuna make the long trek to Sin.

Final Fantasy X is not a short game. It took me over 50 hours to make my way to the final battle, and even then I'm sure I missed a lot of the extra items and collectables. And despite its length, it never felt like I was being dragged down by filler. Tidus and company end up going on a real adventure, complete with a number of mesmerizing locations. The game finds an excuse to send the heroes deep into the snowy mountains, through a wasteland, into the forests, into dark castles and even underwater. When the credits finally roll, it definitely feels like you've journeyed from one side of the world to the other. 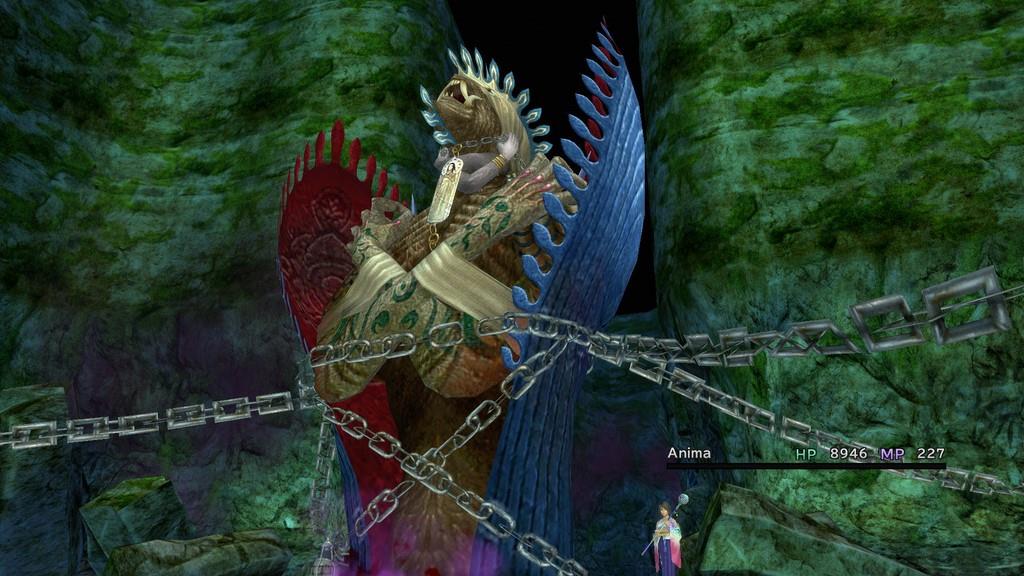 The combat is turn-based, not unlike the classic Final Fantasy games from our past. A party can consist of three players, each taking turns casting magic, using items and attacking the intimidating enemies. But here's the thing that sets Final Fantasy X apart from every other game in the franchise: Players can swap out party members at any time, even in the heart of battle. This means that you can use all seven characters in a single fight, not only giving players the freedom to mix and match teams, but also giving everybody a chance to earn much-needed experience points.

And wouldn't you know, leveling up is the other important change this sequel makes. While most role-playing games give you a few points to spend on player attributes, Final Fantasy X turns the process into something that resembles a board game. The trick is how easy it is to level up, earning players a chance to move their character around a labyrinth full of new abilities, strength upgrades and other useful enhancements. This leveling-up system is weird addicting and something I wish more RPGs would steal.

Even with these gameplay enhancements, Final Fantasy X still suffers from a number of outdated (or just plain annoying) cliches. Some players may be turned off by the random battles; a trope recent Final Fantasy games have done a good job of shaking. I was also annoyed by some of the characters, which seem way too young for what's going on. There's no way Rikku is more than 15 years old, and yet she's burdened with the responsibilities of somebody twice her age. Part of me wishes that this HD remaster featured a rewrite of some of the more painful dialog. 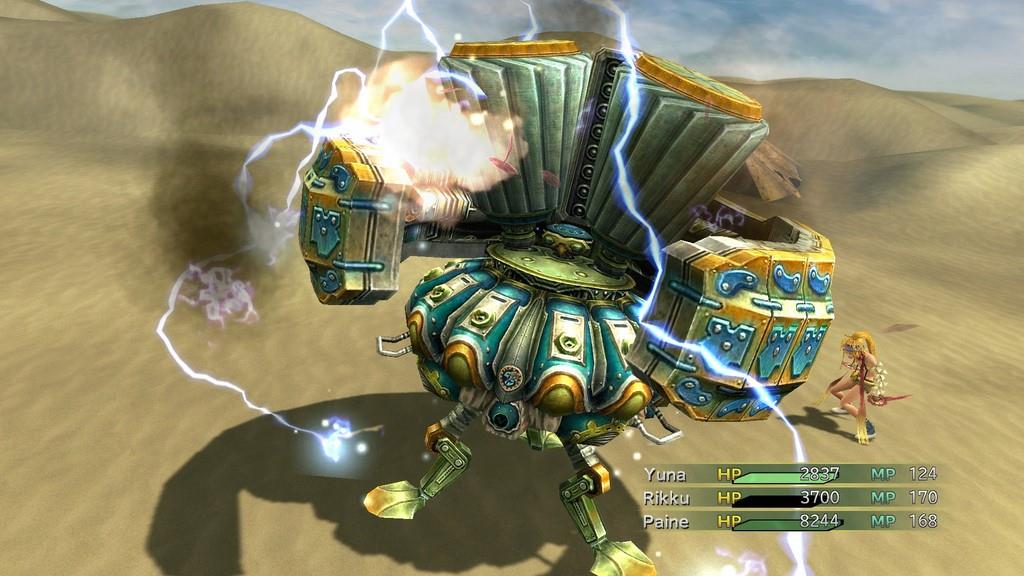 As a Final Fantasy game, you should go in expecting lengthy cinemas. Like a lot of role-playing games, the early sections are mostly cut scenes and rambling conversations between characters. Most of these sequences look absolutely stunning, but I do have a bone to pick with the people responsible for this PS Vita remake. As much as I love watching the long cinemas, it's frustrating that these scenes can't be skipped. Normally this isn't a problem, as you'll only listen to a conversation once. But there are a few annoying moments I had to play multiple times because they came between a save point and tough boss fight.

Despite these problems, Final Fantasy X remains one of my favorite games in the series. I was impressed by the game's emotional story and how it tackles religion. And while the big twist may be controversial in some circles, I still think it's one of the most powerful moments in Final Fantasy history. Some of the characters may grate on my nerves, but this sequel delivers when it needs to.

If you haven't grown sick of Spira after spending more than 50 hours on the first game, then get ready for Final Fantasy X-2.  Although not as well-regarded as the 2001 original, X-2 offers a radically different style of game set in a very similar world. The non-linear approach makes for a good companion piece with the main course, as I doubt anybody is buying this package specifically for this questionable sequel.

This time around you take control of Yuna, who hunts down spheres with her good friends Rikku and Paine. This sends the trio all around Spira taking on side quests, completing mini-games, meeting old friends and always staying one step ahead of other sphere hunters. And all that is before Yuna makes a discovery that will change her life forever. While not as gripping as the first game, this sequel has a lot of unique ideas.

Unfortunately, Final Fantasy X-2 recycles the same stages and enemies seen in the first game. I also found the game distractingly goofy, which was especially jarring after coming right out of Final Fantasy X's finale. On the other hand, I'm not sure there is any amount of time that would have prepared me for the upbeat pop songs found in this bizarre sequel.

I was surprised by how much Final Fantasy X-2 reminded me of another Square sequel, Lightning Returns: Final Fantasy XIII.  From the non-linear structure to the ability to change costumes, you can see the developer trying out a lot of new ideas that would eventually take root in Lightning's final chapter. That's not to say they are wholly successful in this 2003 action/adventure game, but I can respect Square for trying something different. 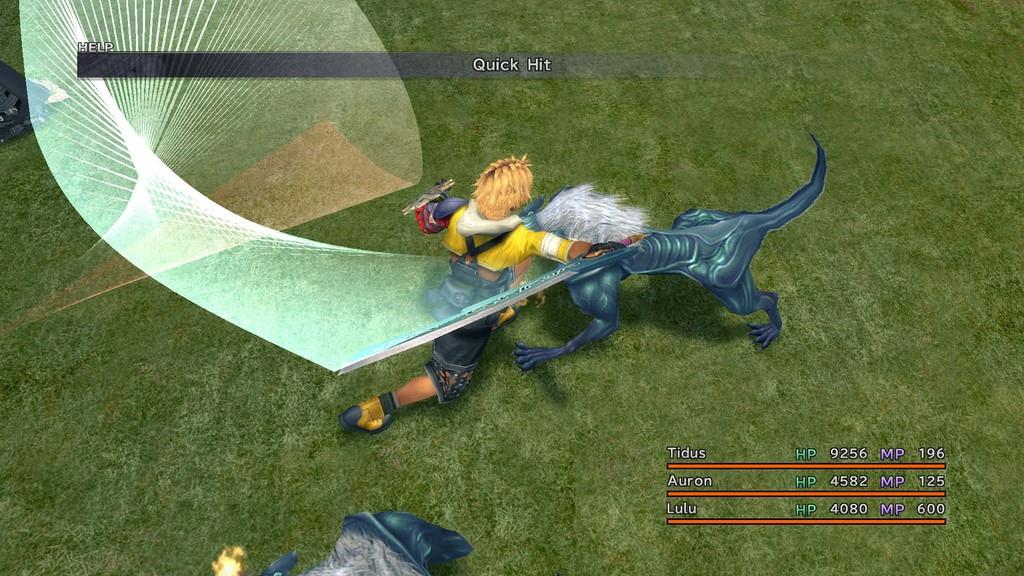 The good news is that Final Fantasy X/X-2 HD Remaster is worth full price for the first game, making the controversial sequel a nice bonus. Both games look incredible on the PS Vita's screen. The world of Spira is bright and colorful, the CGI cinemas still hold up, and the character models don't look like they came from an early generation PlayStation 2 game. If only Final Fantasy XIII looked this good.

As a PS Vita game, this Final Fantasy compilation does very little with the hardware's abilities. Although players are able to heal their party with a swipe of the touchscreen, even that is more of tease than anything. I'm certainly not advocating for a gimmicky interface that takes advantage of every bell and whistle found on the handheld, but I was surprised that I couldn't use the touchscreen to move around the leveling up board, rearranging items, or even start the game. It certainly feels like there were some missed opportunities when porting to the Vita.

With hundreds of hours of gameplay, Final Fantasy X/X-2 HD Remaster is a great value. It's a sharp looking game with enough intrigue and drama to keep you glued to your Vita for months to come. Best of all, it allows a whole new generation to play one of the best Final Fantasy games ever made. This is yet another excellent RPG compilation that is not to be missed.

True to its name, Final Fantasy X/X-2 HD Remaster is an upgraded port one of the best Final Fantasy games of all time, and its much less interesting sequel. Jabs at Final Fantasy X-2 aside, this compilation offers a staggering amount of twists, turns and big moments. It also looks amazing on the PS Vita's screen. Tidus and company's big adventure will make you forget all about Lightning's return.