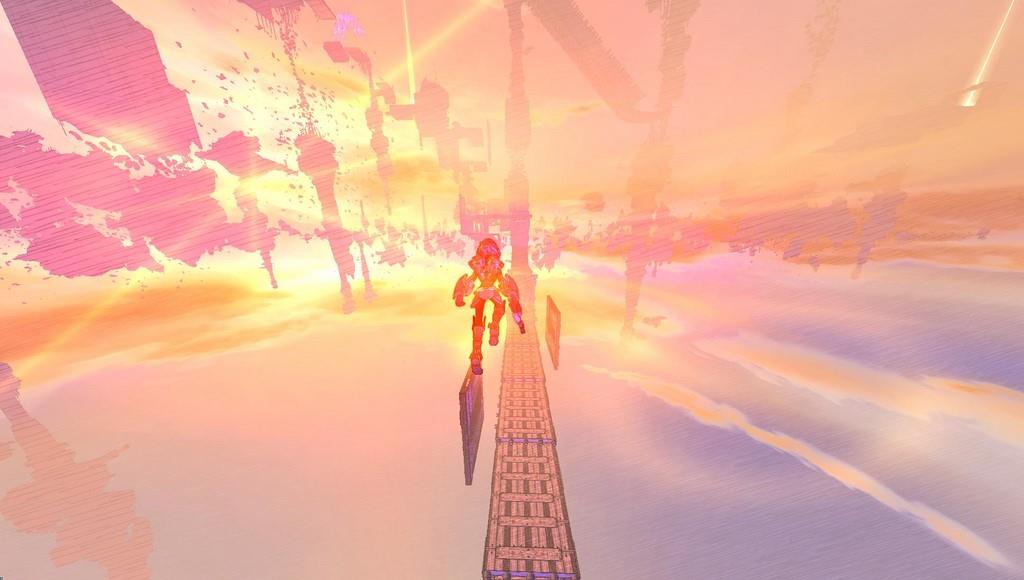 Not too long ago I wrote up a preview article on Cloudbuilt, a free-running platform game by Coilworks. In a nutshell, I liked the concept, but the execution needed a bit of work. Now that the game has been officially released, it’s time to take a look once again and see if any improvements have been made. Since this is the final build, I won’t be as easy on the game as I was in the preview.

Overview
The story of Cloudbuilt is…well, it’s there, but there’s not much origin, if that makes any sense. In between stages you can examine a computer in the room that’s basically the game’s hub to listen to various chapters that detail the story. The problem is where the story starts out. Basically, you were in some sort of war or battle and you see yourself in the room as a blue wireframe character while your physical body lies in a bed. Essentially you (well, the body in the bed) are alive, but are asleep while your biological and electronic components synchronize and you may experience the misfiring of neutrons for several hours. Don’t look at me, that’s what the computer in the corner of the room says. More and more of the story unfolds as you complete more stages, which is nice.

As for the gameplay itself, it’s basically a free-running third-person platformer where you go through each stage as fast as possible. You’re equipped with a booster for faster and enhanced movement, as well as a blaster to “defeat” any enemies you come across (I’ll get into why “defeat” is in quotes here in a bit). You start out with a certain amount of lives in each stage and you can increase this amount depending on how well you do in each stage. For instance, while the starting cap may be your standard platform-starting-lives fare, after a few stages you might increase the level cap and gain more chances in each stage, and trust me when I say you’ll need it.

What Bothered Me
Let me start out by saying that Cloudbuilt is in no way a bad game, but the parts that are flawed can take out some of the fun, and the first you may notice right off: the controls and movement. I mentioned this in my preview article, but it seems like the character moves too quickly in the stages and the controls can seem a bit finicky. It’s really easy to accidentally overcorrect yourself when jumping from platform to platform, especially when the platforms aren’t much bigger than your character. The fact that you have a booster is nice, as it allows you to jump longer distances and run up walls, but if you don’t time a jump right to start with it may throw off your aim. There have been instances where I’ve run off a small ramp, jumped right at the very edge, and—even with the booster—couldn't reach the next platform. Jumping from the middle of the small ramp, however, took me quite a bit further and I reached the other side no problem.

Speaking of running up walls, you can wall-run in the game, but there’s a bit of an issue with it. Just running up walls or along them is fine, but the issue is when you need to jump to another wall, especially when running along them at an angle. You’re suppose to be able to look in the direction of the wall you want to jump to when jumping off of a wall, but most of the time when I did that I didn’t stick to the next wall, plunging me to my doom more often than not, and having to find another way through the stage. Jumping between two vertical walls isn’t as bad, but it still takes some practice as you have to spin the camera around to look at the next wall. 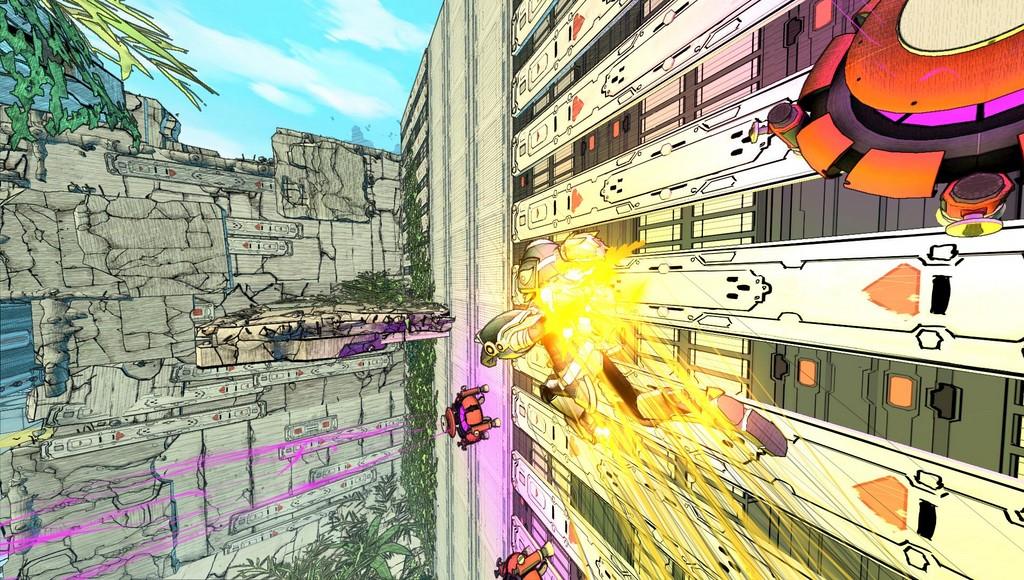 The next major issue is the enemies. Turrets aren’t too bad, outside of the fact that they’re placed in the most inconvenient of places, but they can be taken out and their projectiles avoided with little effort. The main issues are the spiders (for lack of a better term), and this is where you learn that blasting some enemies can be really inconsistent. With the spiders, just blasting them will stun them and put an orange shield around them. During this time they won’t move or attack. If you do this from a distance, you’ll find yourself waiting a long time to see when the stun effect wears off. It won’t…until you get close to the spider. Then the effect wears off with no warning and the spider makes a beeline towards you. Now shooting it will temporarily stun it and push it back a bit (by the way, shooting it when it’s stunned with the orange shield does absolutely nothing to it). You can do this to push it over the edge and into the abyss—but do you see how inconsistent this is? First you stun it, then the stun only wears off when you get near it, then you shoot it over the edge of the cliff? Until you figure this out it’s incredibly annoying.

The final thing to talk about is the difficulty. The first couple of stage serve introduce you to the mechanics of the game. That’s a good thing. The problem lies is that after that into the difficulty starts to increase quite a bit. In fact, it took me a good few hours just to get past one of the next stages available to me. The good news here is that since the paths do sometimes split at certain points, you’ll more than likely have a couple of different options available to you at all times. The problem, though, is that when you combine some of the difficulty with the aforementioned control issues, things can get frustrating quickly.

What I Liked
First off, the premise itself is pretty nice. A gamer who specializes in speed runs can take any game and speed run it, but there aren’t that many games that urge the player to complete it quickly outside of games such as racers that have a Time Trials option. Some games may give rewards for finishing the game quickly, but not to the point that the whole premise of the game is to finish quickly. Plus as stated earlier, the faster you finish, the better your rank and the higher your lives capacity increases. In that regard there is an incentive to keep replaying levels once you learn them, as it’ll help you with later levels.

While the graphics style wouldn’t be my first choice, they do give a unique look and feel to the game. The music isn’t all that bad either. In fact while writing a good part of this review I had the game minimized while in the room you’re in before looking at the map, just listening to the music. It has a relaxing feel to it. The stage music isn’t that bad either, but most of the time I was too focused on the stage itself rather than listening to the music.

Finally, the game itself is unique. As I said, there aren’t too many games that focus on pure speed running. While some of the earlier stages may seem difficult (and sometimes due to things that shouldn’t make them difficult to begin with), playing them over and over again lets you familiarize yourself with them, allowing you to complete them faster. The difficulty curve can be pretty high on some stages, but that just makes it feel more rewarding when you finish and see your lives cap increase.

Final Thoughts
Cloudbuilt isn't a bad game. As I stated in the preview article, there’s a lot of potential here, but the game does have its flaws, and sadly those flaws can make for a frustrating experience. If you can get past the flaws, however, you will find a fairly decent game. If you’re into speed running or games where the goal is to get from point A to point B as fast as possible, this is a good game to check out. However, if games like Mirror’s Edge aren’t your thing, this probably won’t be either. It’s worth checking out, but don’t be too surprised if some of the earlier stages take a while to get through.

Cloudbuilt is in no way a bad game, but it does have its flaws; the worst of which are the controls and difficulty curve.  If you can get past those, though, you'll find a fairly decent and fun game in a genre that doesn't see a lot of entries. If speed running is your thing, definitely give this one a shot.