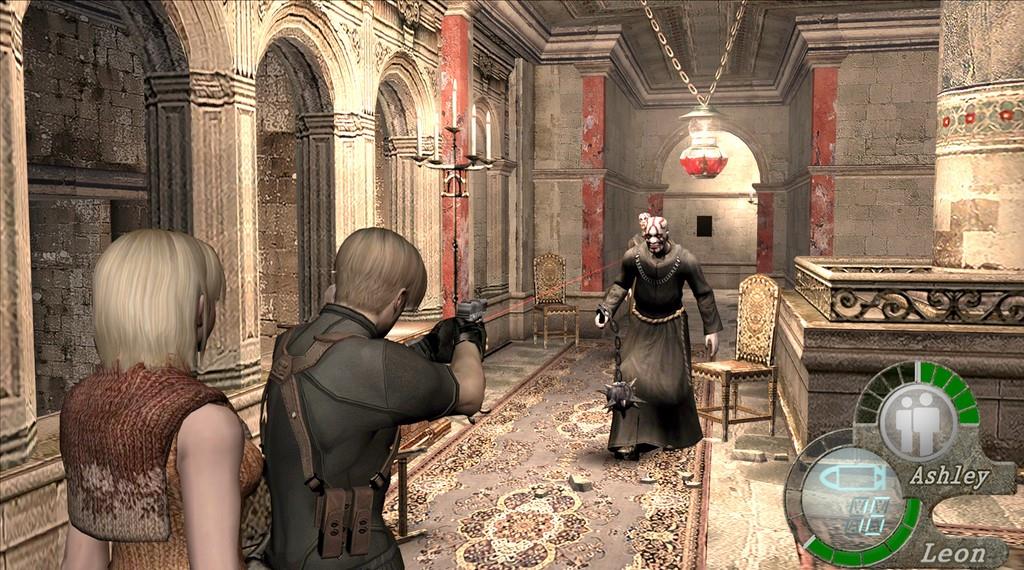 It’s hard to believe that it’s been a full ten years since Resident Evil 4 came out. I remember playing it for the first time in a friend’s uncomfortably filthy dorm; the grimy surroundings thankfully only enhanced the grungy, lonely and desperate atmosphere that made RE4 so unforgettable. I recall thinking at the time: this kind of taut horror, seamless action and gorgeously realized environment is possible? And on the GameCube?! I hadn’t played as engrossing and effectively crafted an experience—the kind that makes the real world melt away and persistently plays on your last, frayed nerve—since the eerie isolation of Metroid Prime.

Yes, it’s strange that it’s been so long since the January of 2005, as I crept from the drudgery of 04’s ice storm into that beautifully haunting nightmare. Sadly, RE4 is more or less the last great Resident Evil game we got from Capcom and I think they kind of realize this. RE5 took all the wrong lessons from RE4—more action! More sexy! More shooting!—and rolled them into what felt like a singularly unworthy direct-to-dvd sequel, jettisoning the creepy, odd qualities and masterful pacing of RE4 in the process. After a brief glimmer of hope with RE: Revelations on the 3DS, Capcom gave us the confused, clunky abomination that is RE6, and the less said about that the better.

I think it’s rather telling that whenever Capcom needs to turn a quick buck they release a new version of RE4. Originally planned as a GameCube exclusive, it was downscaled to the PS2, received an incredibly sloppy porting to the PC by Ubisoft, and then finally arrived on the Wii with a unique control scheme and all the extra content the game had picked up along the way. In 2011 RE4 was ported to Xbox Live and Playstation Network, but this version amounted to little more than an up-res to HD.

Capcom has decided to port RE4 to the PC a second time, but now with the improved HD resolution from the PS3/360 version, PC-optimized controls and newly refreshed textures. By now you probably own a version of RE4—I’ve bought or have reviewed at least 4 separate versions over the past decade—so once again we ask ourselves, is it worth it to buy this game again?

Going back to play RE4 is always like revisiting some idealistic time capsule of perfectly balanced gameplay. In 2004 the game famously ditched the pre-rendered, static-camera backgrounds of RE 1 through 3, a smart move despite the lack of nuance Capcom has demonstrated in the games since RE4. The new fully rendered environments and then-revolutionary over the shoulder camera allowed the gameplay to be far more dynamic. Tedious key puzzles gave way to sadistic traps, jump scares were replaced with heart-pounding chases and escapes, and in many instances the surroundings would literally explode and crumble right around you.

This makes RE4 a lot more like an action-horror movie, rather than the stilted, Sunday afternoon horror soap opera feel of the previous games. Despite this shift to an action-oriented focus, the gameplay and story are far more Indiana Jones than Michael Bay. There are plenty of absurd, colorful characters and bigger than life situations, but RE4 has a pitch perfect sense of restraint and pacing that is utterly and completely absent from RE5 and 6.

The game repeatedly challenges the player to top their previous successes with increasingly difficult predicaments. Are those crazed villagers making you sweat? Now fight them at night, in the rain, and when you go for the guaranteed zombie-killing headshot, a horrifying tentacle will sprout from their necks. That psychotic dude with the swords on his hands was pretty hard, huh? Now kill two of them in a very small room. Remember those creepy invisible bugs that scared the crap out of you in the sewer? Get ready! We’re going to drop a whole hive of ‘em on you.

Despite this seemingly punitive learning curve, RE4 didn’t ramp up the difficulty exponentially. It would ask you to do something impossible, and once you’d barely made it out of that meatgrinder it would drop you into one that was twice as impossible. But if you made it out alive, there were brief precious lulls in the carnage—easier, slower periods of gameplay that let you relax…just long enough to get paranoid. 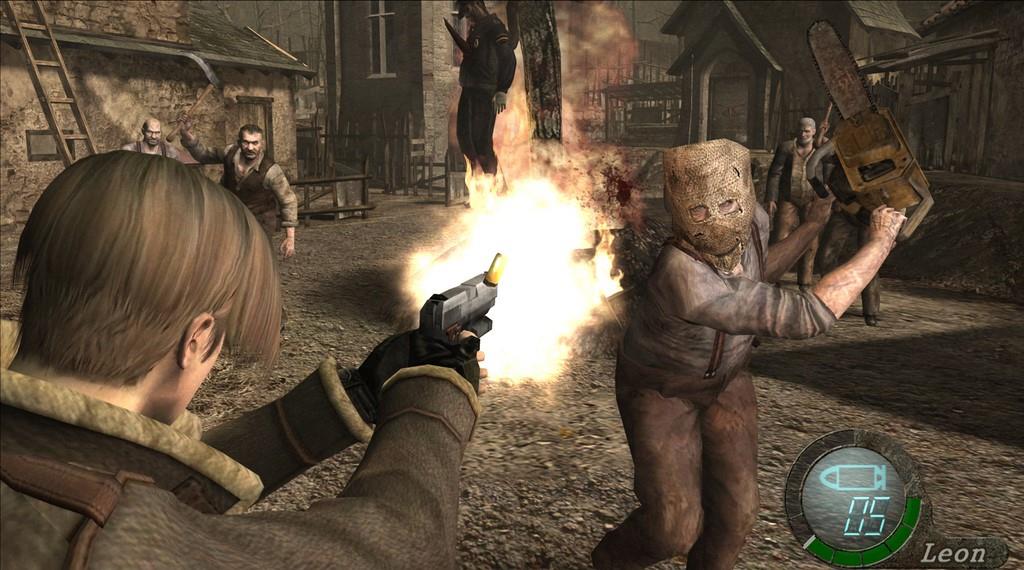 This erratic waveform of intimidation, panic, action and relaxation struck the perfect balance between adrenaline and anxiety. RE4 existed during a brief period of time when games seemed to hit a difficulty sweet spot. Games like RE4, Metroid Prime 2 and Doom 3 weren’t so easy that they led you around by the hand like recent Call of Duty games. However, they also didn’t torture you with the “OLD SCHOOL RETRO HARDNESS!” currently being popularized by the subculture of psychotic masochists who made Demon’s Souls mainstream. Yes, back then video games weren’t a false dichotomy between cutscene plays-itself rollercoasters and the game equivalent of a ghost pepper-eating endurance contest. RE4 was stout enough to challenge and more importantly scare a seasoned gamer without being utterly discouraging.

All of this perfectly balanced gameplay is completely preserved in the new HD Steam port, along with the various extras the game accumulated from version to version. This includes all of the Mercenaries maps and characters, along with the Separate Ways expansion pack in which you play as Ada Wong. You’re getting the complete RE4 package in this release, all optimized for the PC platform. That’s far more than you can say for the shoddy original PC port, but I still found a few rough edges in the transfer.

For one, the keyboard and mouse controls aren’t as smooth as I’d like. They’re perfectly functional, but they don’t really take advantage of the inherent precision a mouse offers. This new port goes back to using the old laser pointer aiming from the very first versions of the game, which works well enough but feels like aiming an analog stick mapped to a mouse. The Wii version implemented actual pointer controls, which would’ve felt far more natural on a mouse as well. 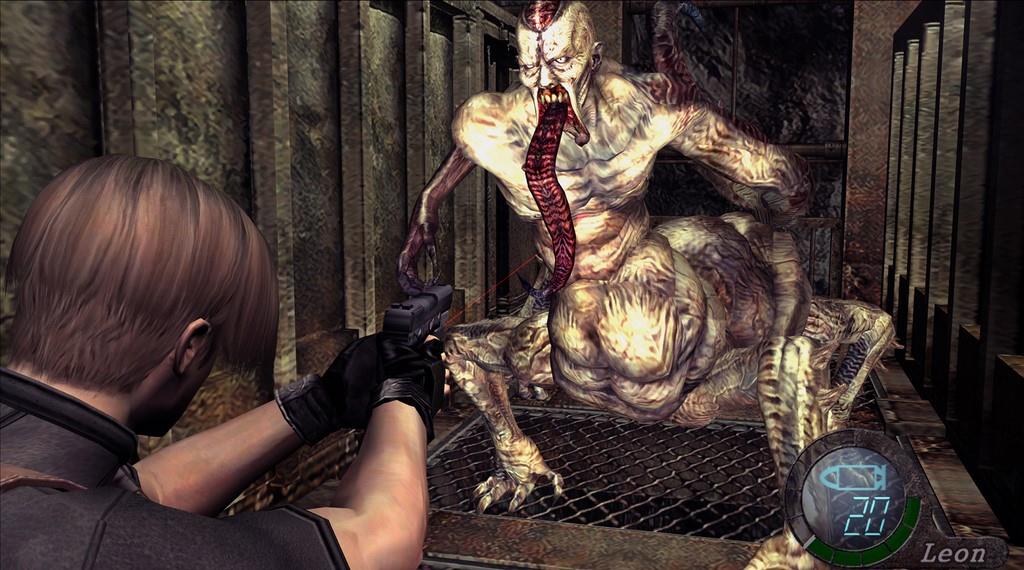 Movement is also a bit clunky, but because it’s mapped to keys now instead of an analog stick. RE4 has always had somewhat “tank-like” movement controls—you can’t move or even strafe when aiming—but when these controls were analog, it felt more natural and fluid to turn and dodge attacks. Making the whole thing digital is like going back to old DOS-style keyboard controls in Doom after playing the game for decades with a mouse. It works but it isn’t exactly comfortable.

Of course you could always plug in an Xbox 360 controller, but that kind of defeats the purpose of a keyboard and mouse, doesn’t it? PC controls are considered superior for aiming precisely because they offer more fine control than an analog gamepad. It feels like the developers could’ve capitalized on the mouse controls a lot more but instead they let the opportunity elude them. If you’re going to play RE4 on a gamepad, you might as well just buy it for the 360 or PS3.

The graphics are definitely improved, but not in any hugely appreciable way. In fact I had to look at some comparison screenshots to notice the difference. Many of the textures are higher res, but I didn’t notice any significant increase in polygon counts. It’s a testament to the game’s original graphics and art direction that the visuals hold up so well; the only thing that had really started to show their age were the smeary textures. That said, there isn’t a noticeable enough improvement to justify buying the game over again. 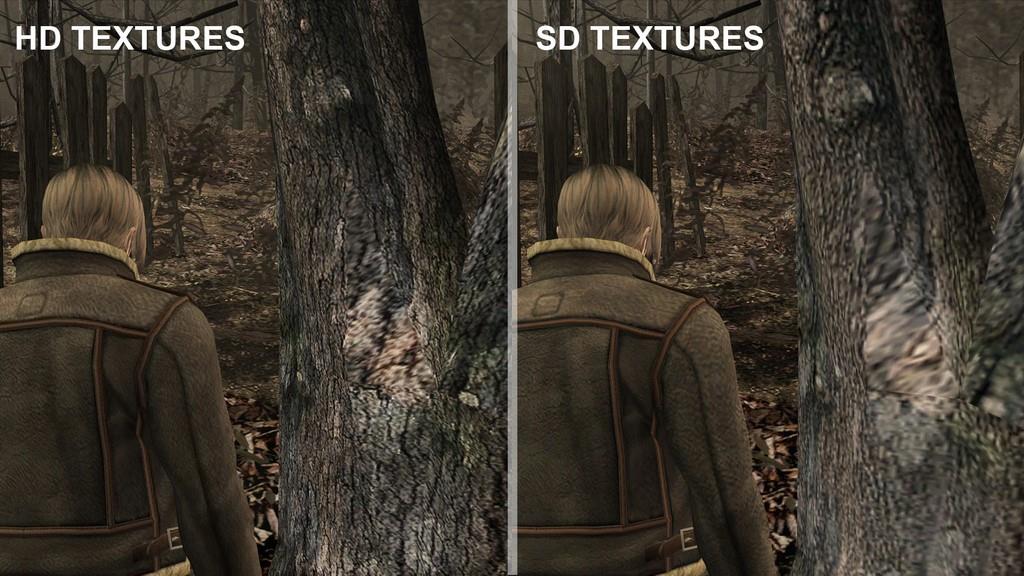 As with any port, it can be tough deciding to go for the double (or triple) dip on these things. To be perfectly frank, if you already have a copy of Resident Evil 4—especially if it’s the Wii or PS3/360 version—there aren’t a whole lot of reasons to get this latest PC port. Ironically, it might even be a better idea to get the horrendous original PC port by Ubisoft, and then mod the daylights out of it. The modding community fine-tuned that original, awful PC port into something quite impressive in the years since its release by putting out HD texture packs, new control schemes and modern graphical effects for it. In that respect it almost feels like Capcom was shamed into making a proper, official PC version that didn’t royally suck. Of course it’s ultimately up to you to decide whether putting in the time and effort to mod the old game is worth more (or less) than just buying the new version on Steam.

One thing is certain, though: Resident Evil 4 remains one of the greatest games ever made, and one of the last great mainstream horror games. If you still haven’t played it in the decade since it’s been out, there’s no time like the present and with Steam it’s more convenient to play it than ever. Modern horror games like Amnesia and the upcoming Alien: Isolation are returning the genre to its minimalist roots, but if you want classic survival horror that sets your pulse racing and leaves you in a cold sweat, it still doesn’t get better than Resident Evil 4.

Resident Evil 4 is still one of the best games ever made, but less-than-ideal mouse and keyboard controls and a barely noticeable texture upgrade keep this PC port from being the ultimate version of this masterpiece that it could have been.