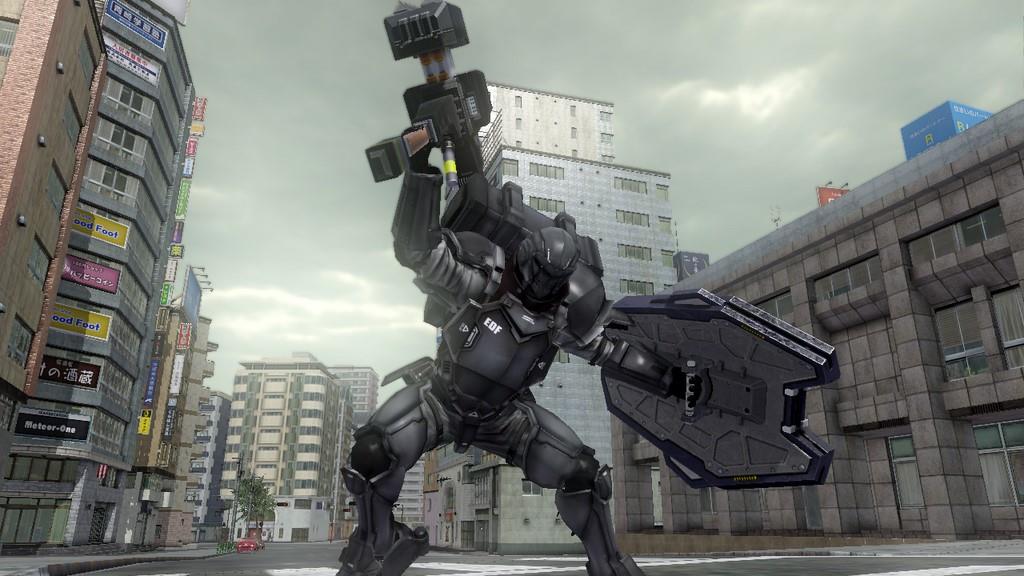 Sometimes you get just a small taste of a game and immediately can understand the entirety of said game, and in that situation a snap judgment can easily be made about how you're going to feel about the game. Such is the case with Earth Defense Force 2025. Five minutes in to the game, I knew I was in love, with it's wacky use of Havok physics, hammy voice acting, ridiculous premise, and a ton of other factors, I knew I was going to hunt bugs until well beyond the deadline for this review. While Earth Defense Force 2025 is a ton of fun, it's not without its problems, which really hold it back from being the end all be all of bug squashing games.

Earth Defense Force 2025 is all about shooting bugs, shooting bugs, and then shooting more bugs. You'll be participating as a member of Storm Team, with the option of selecting one of four classes, the Ranger, who is your basic infantry, but has access to some incredibly strong weapons. The Wing Diver, a mobile unit with the capability of vertical movement and the ability to hover. The Fencer, a heavy tank-like unit that can carry shields and heavy weaponry, and lastly, the Air Raider, who is able to call in vehicles, air strikes, and serves as a support class to the other three.

For each class there are also countless weapons. And while there are some weapons that are a slight improvement over their other iterations, there are a bunch of other gimmick weapons that adds a great deal of variety of how you dispose of all those massive insects, one of my personal favorites is the Firecracker grenade that throws out numerous tiny explosives that individually don't do a whole lot of damage, but if you chuck them at something reasonably close you can expect to do a great deal of burst damage, just be careful you aren't too close, as friendly fire will take you out as it did me on more than one occasion. And don't expect to collect all of those weapons without putting some effort into it. A single playthrough as the ranger only netted me about twenty percent of the total weapons in the game, and that's across eighty-five (yes eighty-five) levels of gameplay. If I had to really knock this game for anything, it would have to be its overly long campaign which clocks in at around fifteen hours to complete, that has players taking on the giant insects and Ravagers of the first game who have returned eight years after the events of the Earth Defense Force 2017 (I guess we're going to pretend that Insect Armageddon didn't happen?), and have brought a seemingly endless supply of fodder for you to shoot. The biggest problem here is how repetitive the game starts to feel after a while, when wave upon wave of insects bears down upon you, and creates little more than a shooting gallery, albiet deadly on harder difficulties.

For such a simple game it certainly does have a lot of challenge to offer. Playing through the game on normal difficulty isn't too tough, but when you start to up the difficulty to get some of the higher end weapons, that's when things can quickly escalate out of control. Even moving from normal difficulty to hard difficulty requires a substantial change in how you play the game. Although the actual changes to make the game more difficult aren't all that special, enemies are given more hit points and can move faster. Playing on Inferno difficulty is an almost ridiculous challenge, no matter which class I used I had a difficult time clearing even the first stage, though the reward was well worth it, a rather powerful rocket launcher that carried me through a good quarter of the game. 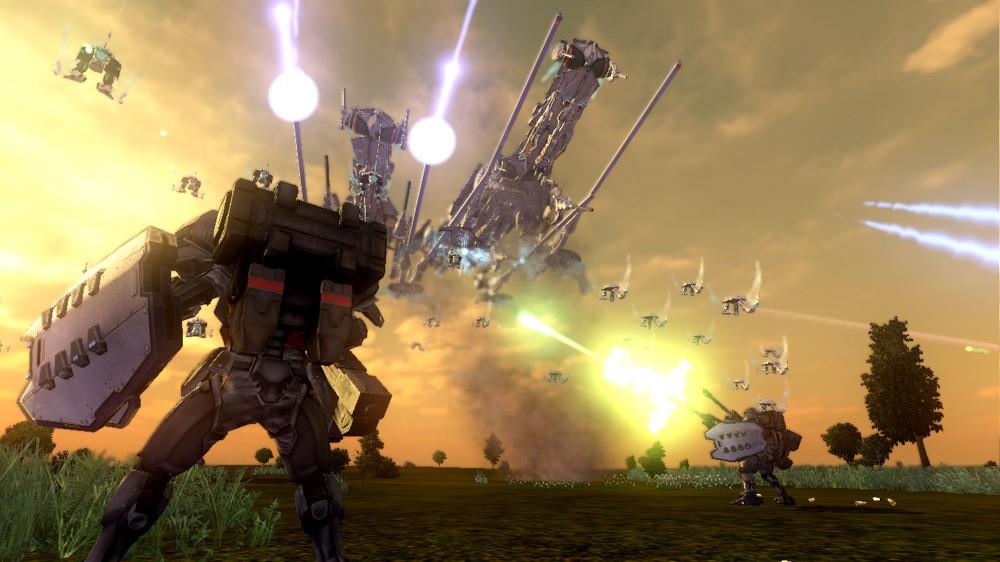 The simple visuals are a slight upgrade from Earth Defense Force 2017, but overall this game is pretty bland looking, and you won't be seeing a whole lot of variation between the areas of combat. There's a city-scape that features some suburbs and huge buildings, a mountainous region, a waterfront, and a ruined city. The eight-five levels will be spread across these four areas, and you'll be seeing the same bits of scenery quite frequently. One of the trade-offs for having visuals that aren't pushing the console, a solid frame-rate, except for when too many enemies clutter the screen. It's rare, but there are times where the game drops to single frames, which makes taking out some long distance enemies a problem. The use of the Havok Physics engine makes everything destructible, which means buildings will fall, enemies will fly, and if you're a fan of silly rag-doll, you're in for a treat.

The audio is a tough sell, especially after seeing that it was done at Bang-Zoom Studios, which is known for producing some of the best dubs in the anime industry. With EDF2025, it seems like the actors just decided to ad-lib the entire audio track. This means you get some hilarious one-liners, awesome B-Movie level acting, and a cheesy sci-fi sounding story. The music is also lackluster, with the main theme being constantly repeated throughout the game, the credits song though, is almost worth the effort to complete the game. 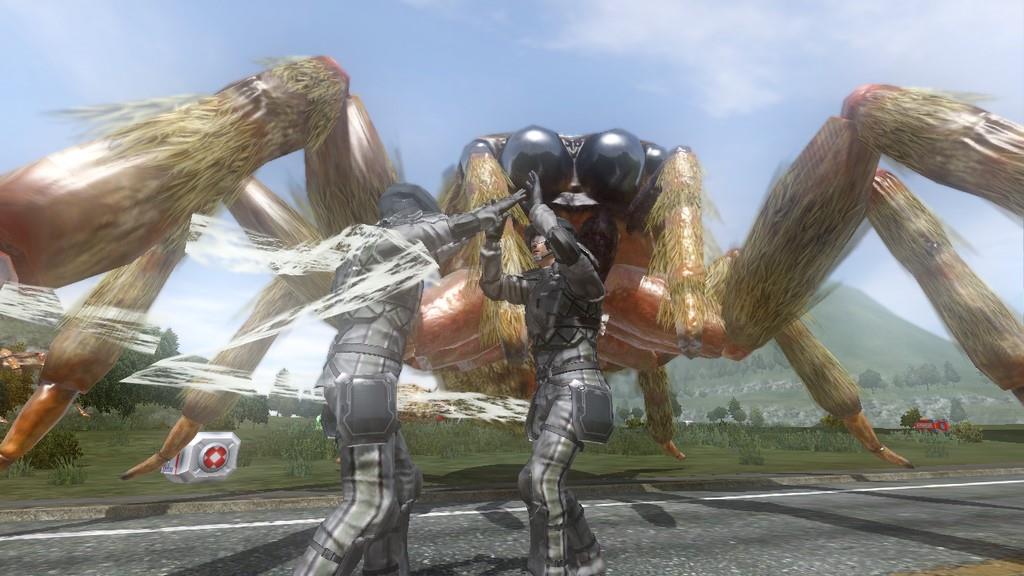 If you've got some friends available, there's co-op multiplayer with up to three other friends online, or you can play locally via split screen with another friend. This helps to tone down the difficulty of higher levels because the computer AI for the supplementary troops is absolutely atrocious at times, constantly getting stuck behind buildings or down in trenches. Enemies sometime display weird behavior where they'll wander to the edge of a map, forcing you to make the long trek to track them down, which is made a little easier if you have a friend playing as the Air Raider and calling in vehicles for you to drive, which are a lot of fun as well, unless you're a Fencer or Wing Diver, then you've got to ride in the back, which is hilarious in its own right.

Playing Earth Defense Force 2025, I was at times having a blast mowing through tons of giant insects, and using the myriad of weapons to blast them to pieces. Other times it felt like an absolute slog, with little redeeming factors. Then I went online and suddenly the game was fun again. EDF2025 has this weird ability to be a load of fun but utterly boring at the same time, and really the game is greater than the sum of its parts. If you want a good pop-corn type game that is just a great way to relax and not have to really think about what you're doing then playing this game on normal or easy is the way to go. But if you want a real challenge, this game is plenty keen on being able to provide one for you. The game isn't going to win any awards for its visuals or audio, but the gameplay is pretty competent and with friends can result in some pretty satisfying gaming moments. If you've got a hankering for wanton slaughter of bugs that will make you feel like a kid with a magnifying glass again, Earth Defense Force 2025 might just be your bag, but you're going to need a huge magnifying glass.

Earth Defense Force 2025 is a perfect game to just relax with and let your brain take a break. But if you want something that provides an old-school arcade styled challenge, this is also a great game to check out.