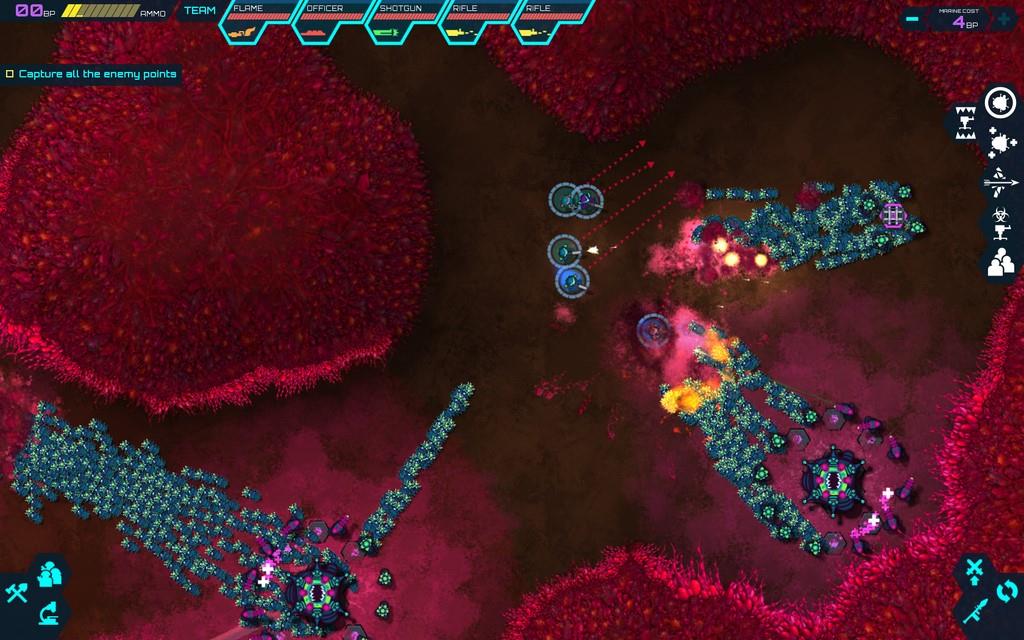 Infested Planet is a smart real-time strategy game. It takes the often daunting RTS genre and reduces many of its complexities into simpler forms without losing any of the smarts. You still need to plan your upgrades, move quickly, and micromanage, but without the frustration of total loss upon failure thanks to a smart resource reallocation system. The only problem is the game has plenty of frustration ready for the player in its difficulty, which can often feel overwhelming and random.

Take command of a group of space marines on a mission to wipe an alien race off of an infested planet. This game is light on scripted story, but that's okay because your personal story of conquest will be epic enough. The story proceeds linearly along a mission line, starting with a few tutorial missions and gradually opening up the arsenal until you have access to everything near the end. Upgrades must be purchased with money earned from completing missions, and there are two side mission paths if you ever find yourself low on funds. I never ran into this problem because the game is overly generous with money, even giving a small reward for failed missions.

Although there are a few variations, most missions consist of "Destroy All Enemy Hives." You begin each mission with a small crew of riflemen and some BP. BP is required for all upgrades and more is obtained by taking enemy hives, capturing BP crates, and sometimes through level-specific objectives. The brilliant thing about the BP system is that the points can be reallocated at any time. You can deconstruct a building to buy more soldiers, or downgrade a few units to construct more turrets. Knowing you are never locked into an upgrade relieves some of the stress that upgrade pathing in RTS games can cause. The other resource you have to manage is your ammo pool that all of your power attacks draw from. Every power attack, such as the trusty rocket-propelled grenade, takes some ammo to use. Once it is depleted you must wait for it to slowly refill, or find an ammo crate to quickly regenerate your stock. Your bigger moves, such as chopper strikes, takes more ammo but are way more devastating.

However, this doesn't mean you are in for a leisurely stroll through the game's many missions. One of the game's trademark features are its huge waves of enemies that spawn endlessly from hives all around the map. The only way to cut them off is to kill the hives, but leave one unattended and the stream of aliens will eventually find and reclaim it. You need to be smart but also efficient to succeed, because one or two bad fights and you will find yourself facing a Zerg Rush type scenario. It helps that your soldiers always respawn shortly after dying, but when the enemy is upon you those few seconds can turn the tide of battle. Aiding your enemy are 33 different mutations that they can gain throughout the battle at random. Mutations add buffs to the enemy forces, and if you let them gain too many they will snowball out of control and over your last stand. Mutations are an interesting idea, but not all are created equal and bad luck can quickly put you in a hopeless situation, especially in the brutal final missions. 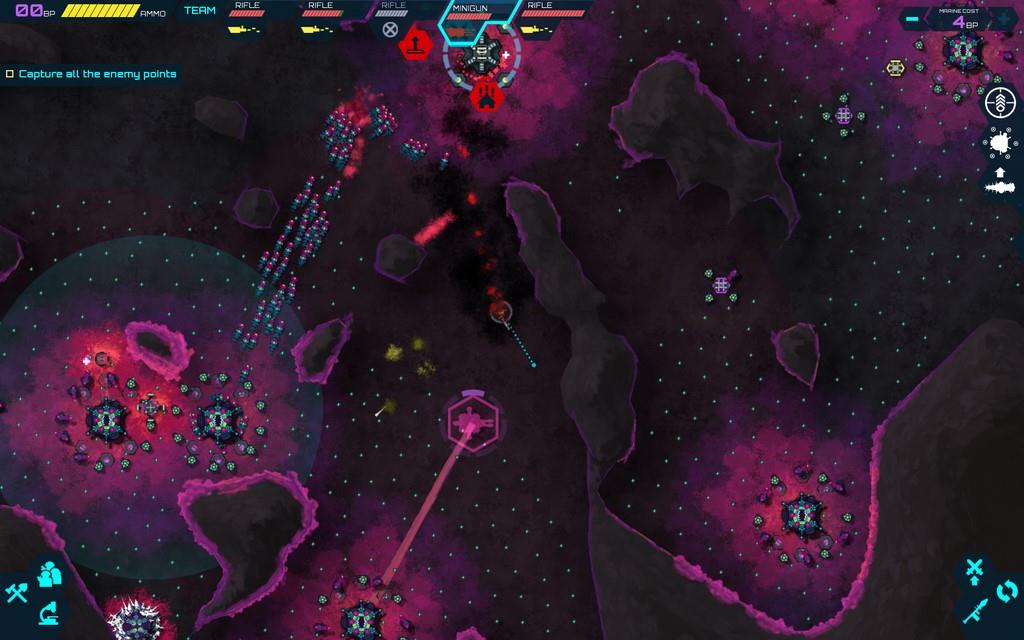 The campaign could take anywhere from 10 to 20 hours depending on how much time you spend on sidequests, and there is still plenty of content once you are done. You can take on practice skirmishes of varying difficulties, or even make your own custom scenario if you feel like making your own challenges. There are also three weekly challenges with leaderboards. Compete with players around the world on these objective-based missions to see who can complete them most efficiently.

The game doesn't do too much to impress graphically, but that was probably for the best given how much is packed onto the screen. Too many graphical flairs would likely create chaos in the battles, and it makes due with its simple 2D characters. Sound is a different story. The music and sound effects are completely bland and forgettable. The music ramps up during epic moments in the battle, but I never paid it any mind.

Infested Planet deserves recognition for its many smart ideas, but its random difficulty often leads to a lot of frustration and plenty of mission restarts. When things finally came together on a tough mission victory it felt great, but all of the trial and error leading up to a win made them bittersweet.

If you are a die hard RTS fan looking for a new challenge, Infested Planet's mutated hordes might be just what you are looking for. Everyone else be wary. Infested Planet is easy to pick up and play, but its alien army wants nothing more than to tear you apart.