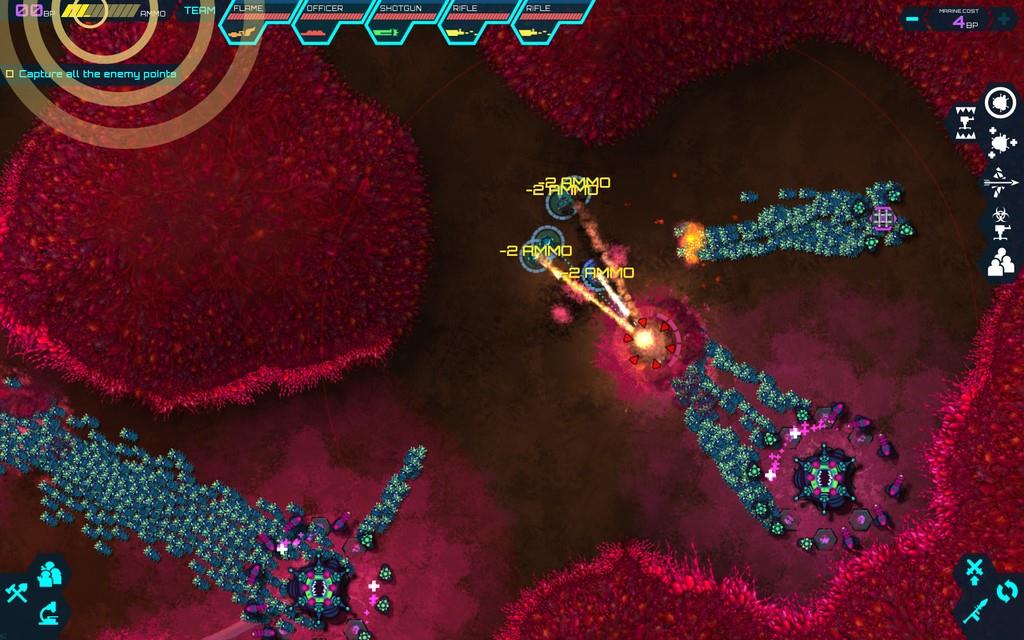 Infested Planet is a relentless game. The game is a Starship Troopers-inspired real-time strategy game that puts you in a team of space marines battling against an endless alien horde. Using your quick wits and fast hands you must destroy enemy hives, take their bases, and ensure that no alien makes it out alive. But epic scale comes at a cost, and sometimes more enemies just means more frustration.

The story revolves around the journeys of a military group hired to purge a planet of its alien inhabitants. Like most RTS games your clean up efforts are split into contained missions. You get a tiny bit of story before launching the mission, and occasionally more is added during missions. At each missions onset you are given five rifle-toting marines to begin your assault. To expand your army you need to gain BP by completing goals like capturing enemy bases and retrieving BP crates. BP allows you to call more marines, upgrade their weaponry, create turrets, and make buildings. This lets your team snowball very quickly if you are bulldozing enemy bases, but we wary: they will snowball right back. As the mission progresses the aliens will mutate, picking different upgrades at random from a pool of 33 different buffs. By default the hives are defended by egg sacs that spawn enemies, as well as long-range poison turrets. Mutations can add armor, stronger aliens, poison mines, and many other devious power-ups.

Luckily you too can evolve on the fly, adding and subtracting BP however you want. Did you buy too many upgrades when what you really need is more soldiers? You can recycle weapons and structures for full BP value. Maybe you summoned too many marines and you would rather have a chopper strike. You can remove the marines for a full refund. I enjoy the flexibility of the resources, and you never have to worry about making a mistake when building your army. You also never have to worry about losing your army since every dead soldier respawns a short time after their death, and structures can be repaired if destroyed. But once again, aliens get the same perks, rebuilding their hives if you leave them uncaptured for too long.

The final piece of the combat is the ammo system, which controls the use of all of your power attacks. Your go-to power attack is the rocket launcher which you can use at all times assuming you have the ammo to do so. Each shot costs two ammo from your pool of 10, which recharges slowly whenever depleted. Using BP you can buy other powerful attacks, like chopper strikes and mortars.

Completing missions (both main story and side missions) earns you money that is used to purchase new upgrades, which are made available to you gradually as your progress through the game. Money can also be used to purchase one time use help items (like a free soldier) mean for difficult missions, but they are quite expensive. This system works well because you also earn money for failing a mission based on how far you got.

Infested Planet is full of good ideas that add a lot of convenience to the RTS genre but it carries some problems as well, mostly with its difficulty. The main story missions got very difficult very fast. At the moment, I am struggling with an escort mission about halfway through the game that feels nearly impossible. I have tried with a number of different strategies, but near the end the mutations stack up too quickly and I am quickly overtaken. The infinitely spawning enemies feel indomitable, and the speed with which they rebuild their hives is shocking. I am not a seasoned RTS fan so I would like to see multiple difficulty options in the full game.

Even with those concerns in mind Infested Planet is shaping up to be a very interesting RTS title. The game is currently in Steam Early Access (available for pre-purchase for $14.99), and the full game releases on March 6.