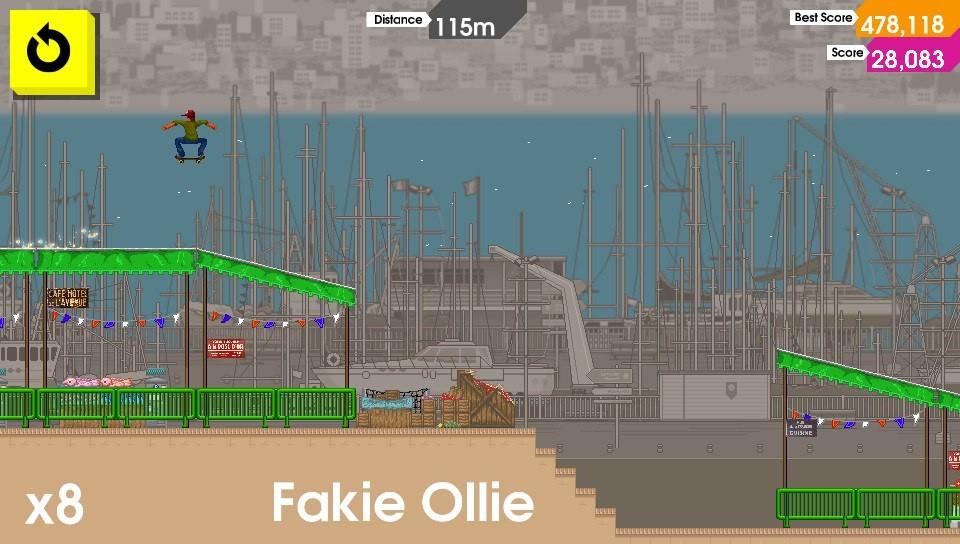 One of my favorite games of the last generation was EA's Skate series. Sure they got to be bug-riddled messes by the time the third game rolled out, but that was part of the charm. The game offered you plenty of places to produce some mind-blowing video clips, and setting up spot challenges against friends made you search for that perfect line, over and over again. What does all this have to do with OlliOlli? It takes that pursuit of perfection to the next level, giving players one of the most technically challenging, but also one of the most satisfying, skateboarding games that gamers out there didn't even know they needed.

I say that this game is needed because it will challenge players like no other game out there. If you played the Tony Hawk games of old you know how tough it was to find that perfect line that gave you that penultimate score that was only heard about in the schoolyard — before the days of Twitch and YouTube. Playing OlliOlli is like going back to those times, except now we've got global leaderboards, so you can sit and stare after what you thought was the perfect run, only to see that you're nowhere near the top. Or you can curse furiously at this game as you flub a landing and ruin that insane combo you were racking up.

OlliOlli has a fairly simplistic control scheme. All tricks are done by moving the left analog stick in various directions. Doing motions like a fireball from Street Fighter will result in a more difficult trick that will require more time to land. You can also spin your skater by pressing the left or right shoulder buttons, further augmenting your tricks. And to string it all together, there's plenty of places to grind, which is done by holding a direction on the left analog stick just as you land on a rail. In order to seal the deal though, you need to be able to land, which you do with a simple tap of the X button. The closer to the ground you are when you hit X, the better your landing. This all requires a bit of a deft touch, requiring precise timing and a great deal of patience.

It's simply a matter of survival in order to progress through the game. Make it to the end of a run and you can proceed to the next stage. If you really want to make some progress though, you'll have to complete some objectives. These vary from level to level, but the consistent missions will require you to get a high score or a high combo, and the rest will be something specific to the stage, like collecting items, or grinding a specific rail, or not kicking off to give yourself a speed boost which is necessary to clear some gaps. There's also a Daily Grind challenge map that you can practice to your heart's content, but then when it comes time to run it for real, you have one shot to make it count.

OlliOlli's got some simplistic visuals, but really solid animation that make each trick look grand, and wipeouts painful. It's bright and colorful and has some interesting art direction that's borderline stereotypical at times, but we're really all here for the gameplay. The soundtrack also stands out on its own, offering a few different genres, all with really good production values. Hopefully they can release the soundtrack on Bandcamp or something because I would totally be down to buy a copy.

If there's anything holding OlliOlli back it would have to be the buggy nature of the game. It's crashed a number of times, and it's not like I was doing anything out of the ordinary. A crash would most commonly occur when I'd land a trick, or even when I'd wipeout, making each attempt at landing a combo a game of Russian Roulette with my Vita. While the controls are simple, it's kind of hard to make the game do what you want to when coming out of a grind, resulting in a lot of ollies or simple kick-flips.

If what I've listed above doesn't seem like a dealbreaker, then give OlliOlli a go. It's a great indie title that has some incredibly fun gameplay and offers up a challenge that is unlike any other game of its kind. Skate may have given players the thrill of the hunt in looking for the perfect place to spot up and ride, but OlliOlli wants you to put up or shut up. It gives you some of the most well-designed levels, with a perfect balance of fun and challenge that makes it one of the Vita's must-play titles.

Olli Olli is an impressive effort that is only hampered by a few bugs. But if you can look past them you'll find one of the best games on the Vita.