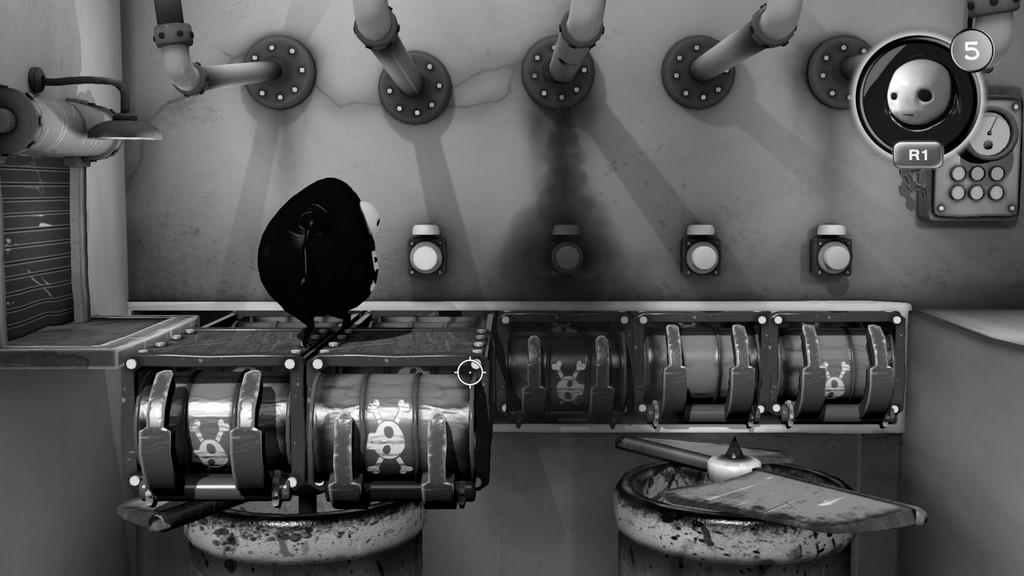 Escape Plan was probably conceptualized by a person who feared the Vita’s many features would go unused -- and then set off to make a game that would use them all, for better or worse. Lucky for them almost every launch Vita game made use of the various control options offered by the Vita. Unluckily for gamers, most were badly shoehorned in. Escape Plan now finds itself ported to the PlayStation 4 where its Vita-specific control scheme isn’t doing it any favors. What was already a troubled puzzle platformer inherits a whole new set of problems on the PS4, becoming something that is hard to play and hardly fun.

Escape Plan begins in a prison cell where a strange creature lays asleep on his cot. This is Lil, and when a mysterious force (the player) helps him get out of his cell he teams up with fellow prisoner Laarg and they begin their daring escape from prison and the clutches of the evil warden Bakuki. Their escape takes the form of a series of puzzle rooms that involve guiding Lil and Laarg through some basic platforming, as well as interacting with the environments using a variety of buttons, an on screen cursor, and even the PS4 controller’s touchpad. Sometimes you have to pull blocks from the background for them to walk on, or knock objects out of the way so they don’t trip. There are even character-unique power ups that are occasionally used, such as coffee that lets Lil run faster. You are given a one- to three-star ranking for each puzzle depending on how quickly you can complete them.

The problem is that the puzzles are never particularly challenging or fun, and the whole game feels like a tutorial for something greater that never shows up. Many of the early levels consist of “walk across this room” or “push one block,” and every time a new mechanic is introduced it babies you for a few stages. The game never trusts the player to understand things on their own and instead forces them through some banal puzzles, as if to ask, “Are you sure you can handle this?” This simplicity gets even more frustrating when something goes wrong due to the awkward controls, which feel ill fitted to the PS4 controller. Rather than the Vita’s dual touch surfaces you are given a thumbstick controlled cursor that is noticeably too slow, especially in puzzles that require you to quickly dart around the screen.

Escape Plan’s graphics are completely devoid of color, cast in black in white. The art style, backgrounds, and characters look great, but some of the less detailed objects have become more noticeable as a result of the move to the big screen. The soundtrack consists mostly of looping classical pieces such as “Flight of the Bumblebee.” I don’t dislike classical music, but I would have liked more variety since the same songs play on and on for entire sections of the game.

Developers love to port their popular games to other systems in hopes of reaching a wider audience. Escape Plan might reach that wider audience, but at the cost of fun and functionality. What may have been a neat little showcase on the Vita becomes a frustrating and rarely enjoyable puzzle experience on console. If there are any other Vita to PS4 ports in the works (hopefully not Tearaway), please just cancel them now.

Escape Plan has come to the PlayStation 4, but it fails to make the transition cleanly. The puzzles are dull and the controls are ill fitted to the new system. I wouldn't recommend playing Escape Plan, but if you absolutely must make sure it's the Vita version.