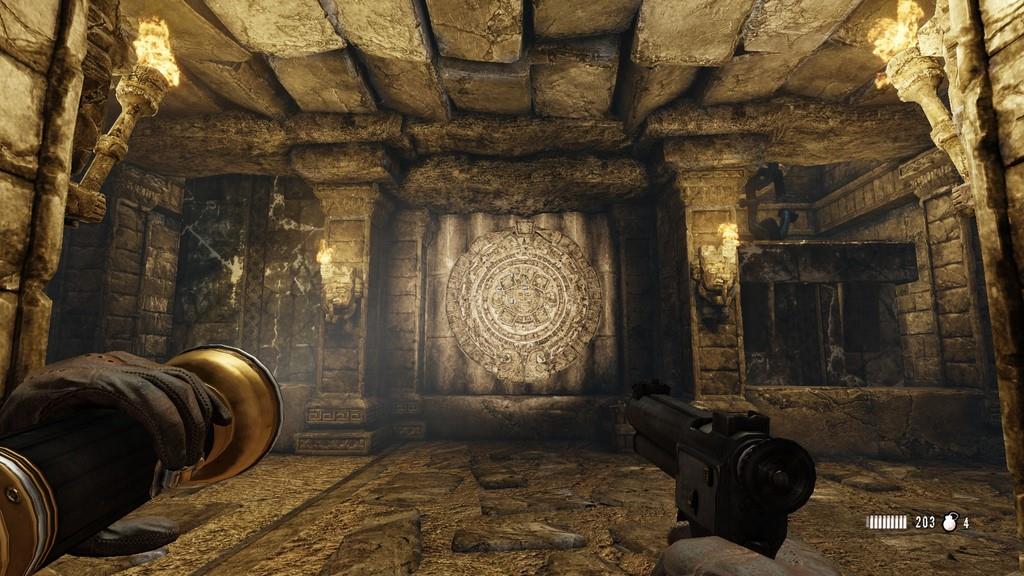 Do not adjust your bullwhip. The Indiana Jones vibe you’re getting from Deadfall Adventures is no mistake. The fur felt fedora, the hero-swagger comebacks, the Harrison Ford good looks; these all serve as the template for James Quatermain, the star of first-person shooter and puzzle-platformer, Darkfall Adventures.

James Quatermain is an apparent gambler and all-around cynic. His famous great-grandfather’s notebook lands in his hands one day, and off James Quatermain goes on a trap-laden, puzzle-heavy, supernatural adventure spanning three continents, two adversarial nations, and a priceless treasure known as the Heart of Atlantis. Accompanying James Quatermain is a smart-ish, red-headed, hazel-eyed siren that is sometimes attracted and sometimes repelled by James Quatermain’s off-the-cuff advances. And, as expected, he was saving the girl so often that I sometimes forgot I was supposed to be going after a national treasure.

With his trusty double six-shooters holstered on his hip, James Quatermain peels caps on all manner of 1930’s threats. He’ll gun down entire platoons of Nazis and Russians, not to mention stacks of undead temple guardians. He’ll shoot people in Egypt, he’ll shoot people in Antarctica, and he’ll shoot people in Central America. There’s nothing and no one he won’t shoot, including long-distance puzzle buttons that flip around with a well-placed bullet. He’ll shoot at flame-throwing traps, he’ll shoot at spear-throwing traps, and he’ll shoot at oversized pottery hiding either treasure or little bugs -- and then he’ll shoot the little bugs. I’m being tongue-in-cheek, obviously, since guns get the job done in most video games today, but it strangely becomes more apparent in a puzzle-shooting game where you won’t be shooting all the time, just most of the time.

Along with a cadre of period-specific weapons like tommy guns and TNT, James Quatermain packs a highly volatile flashlight. It’s apparently really bright and the undead don’t like it when it’s really bright. In fact, the flashlight appears to be copy-pasted from video game thriller, Alan Wake. As in Alan Wake, James Quatermain hits the high-intensity button which drains the battery and burns the undead, making them vulnerable to bullets. 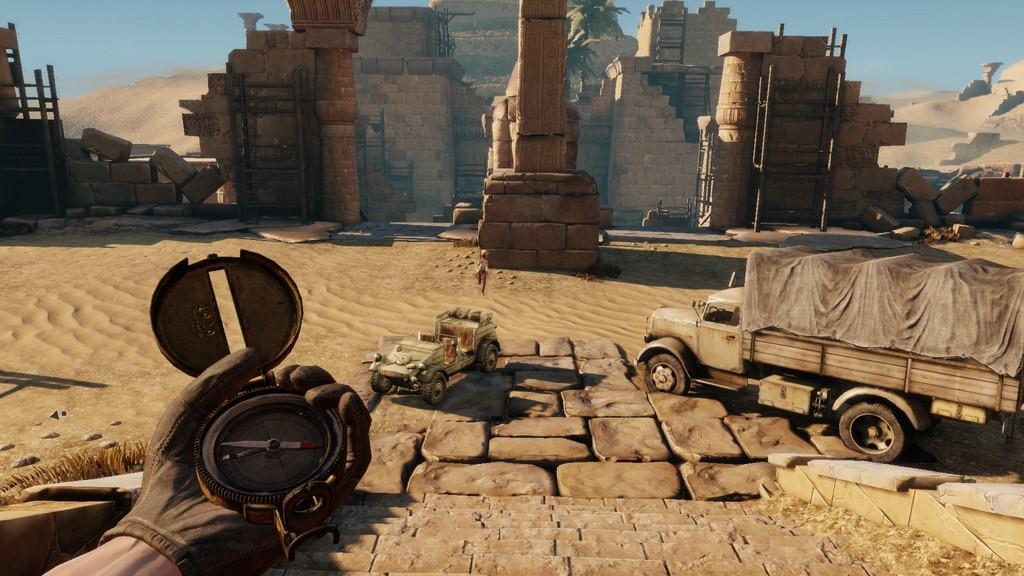 Also in his adventure pack is a compass that’s terrible at pointing toward magnetic north, but excellent at pointing out nearby treasures -- a convention that feels lifted from Far Cry 2, in which the protagonist uses a GPS that starts flashing a little green light whenever conflict diamonds are within a certain radius. In Darkfall Adventures, however, you use treasures to cash in on a dull set of upgradeable skills and abilities. Collect enough treasure and you can run faster, shoot faster, reload faster, and do more damage with your flashlight.

Good old flashlight. There’s even a span of about five minutes in Darkfall Adventures where James Quatermain is stripped of his weapons and left with nothing but his flashlight. He solves a few light-based puzzles with it, but then the game developers obviously got nervous and gave James Quatermain his guns back so he could get back to the business of shooting things again.. It was a brave five minutes without them, though.

Throughout, James Quatermain is immersed in brutalist Egyptian, Mayan, and -- mild spoiler -- Atlantean architecture. The pyramids and mastabas and ziggurats are all sandy and stony and pillar lined, with rotating statues and sliding doors and monster-sized elevators, operated by all manner of pulleys and levers and button presses. 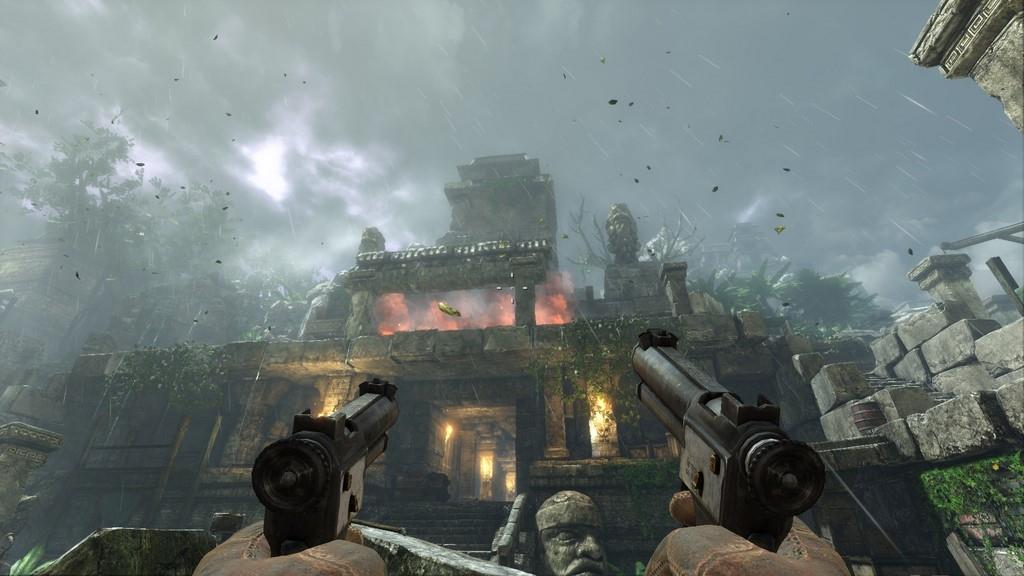 It’d be impressive if they’d taken more time carving out environmental storytelling, but there’s virtually none of that to be found in Deadfall Adventures. The wall murals don’t reveal any stories, the sarcophaguses don’t talk about their inhabitants, and the treasures don’t have anything to say about the artists’ culture. Deadfall Adventures is sometimes pretty, but keeps itself firmly rooted in hallway gun battles and discrete arena target practice. The stones’ geometry and the buildings’ architecture have no other job than to register a few sprites’ worth of bullet damage.

Some of the monolithic halls are embarrassingly rich with statues and carvings but, again, they do little more than provide a requisite level of atmosphere. You’re encouraged to explore every nook and cranny, but that only provides the occasional treasure to buff your stats. Exploration isn’t worth it for exploration’s sake: this unexplored hall might have an alligator pit while this one has a spear pit, but that’s it for story.

Slow to realize its potential, Darkfall Adventures hits its stride somewhere in the third and final act. There they introduce notes from conquistadors that are read aloud, operating similar to audio logs you’d find in the BioShock games. The conquistador writers, however, have little to write home about other than, Gee I’m getting a weird feeling about this whole Heart of Atlantis thing. 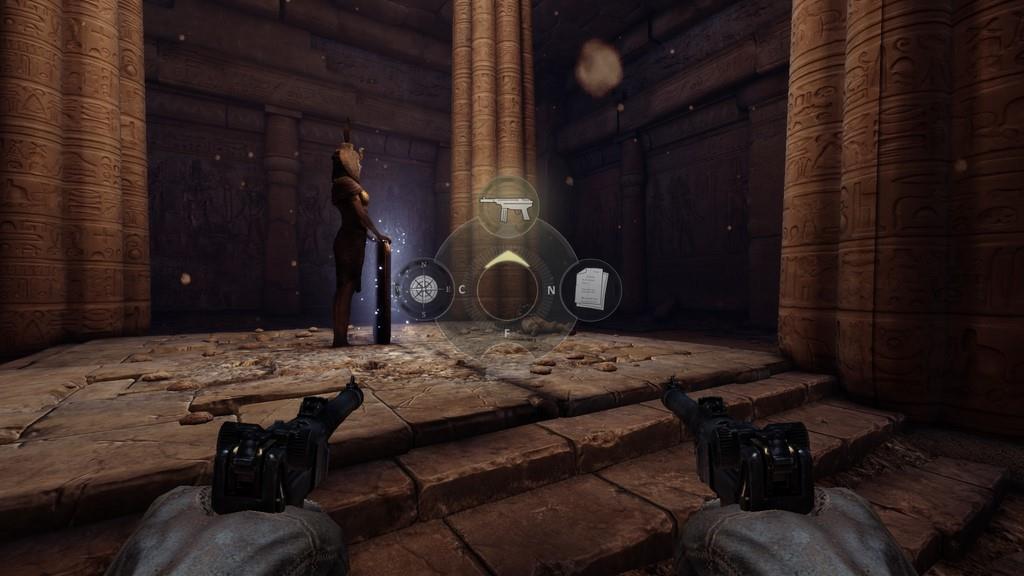 The puzzles, similarly, get quicker and more clever in the latter half. No real stumpers. Nothing to kill forward momentum for too long. Plus James Quatermain’s great-grandfather’s notebook has been there the whole time with varying degrees of clues on each continent; the difficulty level you choose in the beginning determines how obvious and spelled-out the hints are as you flip through the notebook.

Mayan Jungle stages (in the game’s third act) suddenly ramp up what the game could’ve been. Ms. Redhead grows more responsive to the environment and talks more relevantly about what she and Quatermain run across. Environments become more cinematic, with spooky voices calling from out of the temples, Doom-like snarls calling out from around dark corners, and ruins shake in their foundations. Mind the framerate slowdown, though, as too many dust particles in the air can drop things into semi slow motion.

This is also one of those games where you can almost enjoy watching your enemies and allies bumble around the stage for a minute. Everyone usually knows to take cover -- except for when they just stand around -- but they’ll also sometimes start firing into the wall or pillar they’re standing behind. Your allies’ poor firefight skills are matched only by their invulnerability, so there’s never any danger of losing one of the good guys, and likewise very little danger of them taking down any bad guys. Just watch out for grenades. Lots and lots of grenades. It’s like the Nazis and Ruskies get their paycheck docked for every grenade they’re still holding onto at the end of a battle. 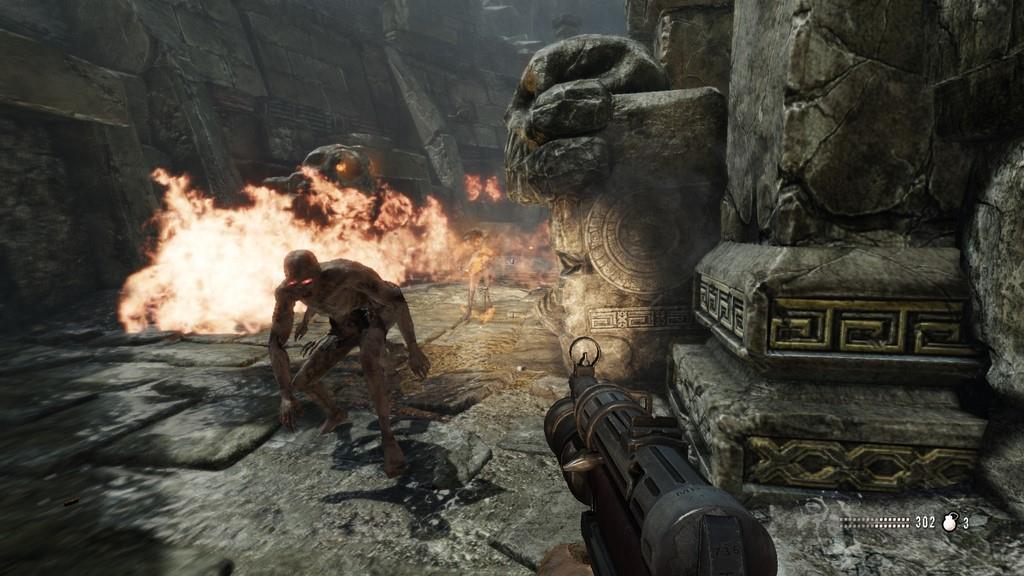 There’s wonderful location-specific hit boxes all over people. Whatever early 20th century weapon you pick up, rest assured that it feels great to drive those bullets home, seeing enemies twist and shout from shoulder, arm, leg, and torso hits. Plus, there’s a meaty crack when you plant a headshot, which is sonically gratuitous, but nice.

James Quatermain is quite the bullet sponge himself. Beautifully, there’s no heads-up display to speak of, and damage is well-communicated through red splatter on the screen and fading vision. Just take cover for a few seconds and you’re fine.

Plenty of traps are instant death, though. One wrong step and James Quatermain will be groaning, dying, and lying on the ground, a You’re Dead gong chiming as the screen goes black. If, as the game tells you to do, you’re taking time to thoroughly explore the bluntly designed levels before you die, you’ll lose a reasonable amount of time and ground covered. Checkpoints are sometimes amateurishly placed too far apart.

The context-sensitive one-button-only controls are not as helpful as they sound. Since it’s “press A” to do pretty much everything when you’re interacting with the environment, you’ll just as often jump when you want to open a door, or activate a switch when you meant to pick up a rifle. 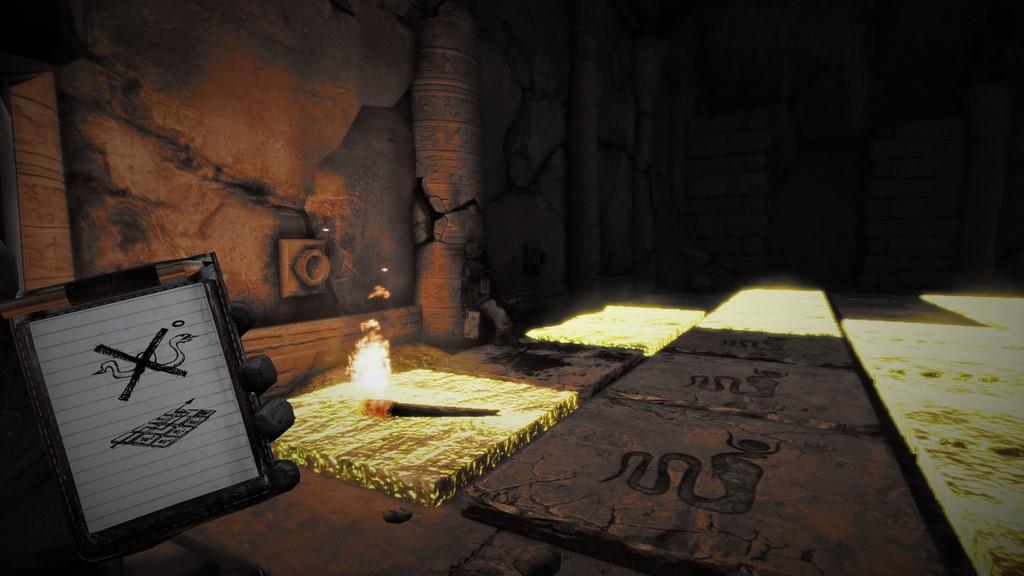 James Quatermain isn’t the Best New Hero of the Year in video games, but he spits out a chuckle-worthy line from time to time. Quite self aware, he once tells Ms. Constantly In Danger, “I destroyed every priceless piece of cultural heritage I could find. You should be safe now.” And, given his druthers, he’d much rather solve problems the old-fashioned way: “Only one way to solve a problem caused by dynamite: more dynamite.” I also let him get away with anachronistically lifting entire quotes from other games and movies. They’re shoehorned into the script, but maybe you won’t mind either when he yells out, “For science!” (Portal) or, “Come with me if you want to live” (Terminator 2).

The requisite multiplayer component embraces failure early on. In three weeks’ time, I ran into exactly one other individual playing online. That person and I spent far more time running around too-large maps, trying to find each other far more than we were trying to kill each other.

There’s deathmatch and team deathmatch and capture the flag, etc., but it doesn’t matter because the global leaderboards only have about 60 or 70 people on them, and you won’t find them playing now. Which is too bad because utilizing the maps’ spike and fire and deadly gas traps would be a welcome addition to straight up shooting folks.

Would’ve been nice to have a Find A Match, Any Match button, just so you could track down those other nonexistent multiplayers. Instead, you’ll have to dig into each and every single category to try and find anyone else. But you won’t.

Multiplayer aside, I felt a compulsion to press on with Deadfall Adventures because it always gave me that flicker of hope that there’d be more to it all. There wasn’t. Yet somehow my aspirations for the game kept growing and outpacing the game’s reality. At its core, you get to shoot some things and solve some puzzles in between.

Darkfall Adventures is a middle-of-the-road Lost World adventure, where our wisecracking Indiana Jones-like hero spends more time saving and re-saving the girl than recovering a purportedly priceless and powerful treasure that ultimately doesn’t come off as all that pricey or powerful in the end. Oh, and I forgot to mention the final boss primarily because he got stuck on some rocks while I shot him repeatedly until he died. The end.