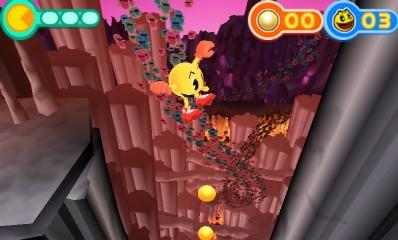 Pac-Man and the Ghostly Adventures

Pac-Man is one of the best known video game stars of all time. In the original 1980 arcade game Pac-Man darts around a maze collecting pellets and fruit and trying to outsmart his ghostly opponents. The game saw many arcade variations but like many games Pac-Man eventually had to get out of the arcade and onto home systems, where his success has been mixed at best. In his latest outing, Pac-Man and the Ghostly Adventures for the 3DS, Pac takes on the sidescroller genre that another arcade great conquered over 25 years ago. But instead of thriving like so many other platformers on Nintendo’s handheld, Ghostly Adventures loses its way and becomes just another forgettable licensed game.

The game begins with trouble in Pac-World, but instead of Pac-Man’s usual multi-colored nemeses, the ghosts, causing the trouble this time around is Betrayus, the ruler of the Netherworld. Using his secret weapon Betrayus and his butler, named Butt-ler, have stolen the Tree of Life, source of the berries (or power pellets) from the people of Pac-World. Pac-Man is tasked with chasing down Betrayus and retrieveing the Tree of Life.  In the game he is joined by his friends Cyli and Spiral, as well as his former foes turned double agents, Blinky, Pinky, Inky, and Clyde. Apparently Ghostly Adventures’ story and characters are based on a recently released cartoon, and serves as a lite version of its source material. Maybe there is something here for fans of the series, but I found the story to be painfully cookie cutter, and I really didn’t care what happened to Pac, Betrayus, or anyone else.

Luckily the story segments are short and to the point. Unluckily the gameplay isn’t much better. For a platformer based on an arcade game that required lightning reflexes and foresight Ghostly Adventures is agonizingly slow moving. Pac-Man only has one speed, and I always felt like it wasn’t fast enough. Pac can hover to reach high places, and dash attack to eat a variety of ghostly foes. Dashes kills can be chained together for score bonuses, which along with various collectibles build toward your level score. Your score will and number of collectibles will earn you a rank at the end of each level, encouraging you to return especially since certain collectibles can only be obtained with powers earned in different levels.

Of the eight story levels, four have power ups you can obtain and upgrade through playing through them. After the tutorial level you are given free rein to visit any area you wish. The level themes are straight out of the platformer playbook. Ice, Volcano, Sky, etc. you’ve seen them all before and Ghostly Adventures does nothing to make them interesting again. Level specific enemies will force you to use certain powers, but using your powers is always a hassle because of the way they are implemented. To use a power you need to hit the corresponding button on the touch screen to activate, but it will run out after a short time. Even worse you have a limited number of activations for each power, and when you run out you have to refill at one of the stations scattered across the levels. You can upgrade your powers to make them last longer and hold more activation charges, but it seems like they should just last as long as you need them to so as to cut out all the refill hassle. 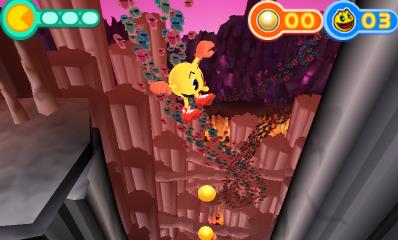 The eight levels will only take you about three hours to complete, and I was shocked by just how short the game was. Arguing value per hour of gameplay is always difficult, but since I felt no desire to return to any of the levels to chase high scores or collectibles I feel safe saying $40 for Ghostly Adventures is very steep.

Even the graphics fail to excite. Seeing these jagged figures and bland levels on the same system that is home to beautiful games like Super Mario 3D Land and Paper Mario Sticker Star is baffling. The music, a collection of upbeat techno, isn't boring but certainly doesn't excite either. They use some classic Pac-Man sound effects to try and mine your nostalgia, but this game is too far gone from Pac’s arcade glory for it to have any effect.

I can’t help but feel that Ghostly Adventures on 3DS was rushed. Maybe it was hastily thrown together to release alongside the Wii U version, which was likely a quickly made TV show tie in itself. I wouldn’t recommend this game to anyone. There is nothing here for fans of the classic arcade and there are much better platformers on the 3DS.

Pac-Man and the Ghostly Adventures is a functional game that is completely devoid of fun. Its not broken, just boring. If you are looking for a platformer to play on your 3DS there are much better options than Ghostly Adventures.