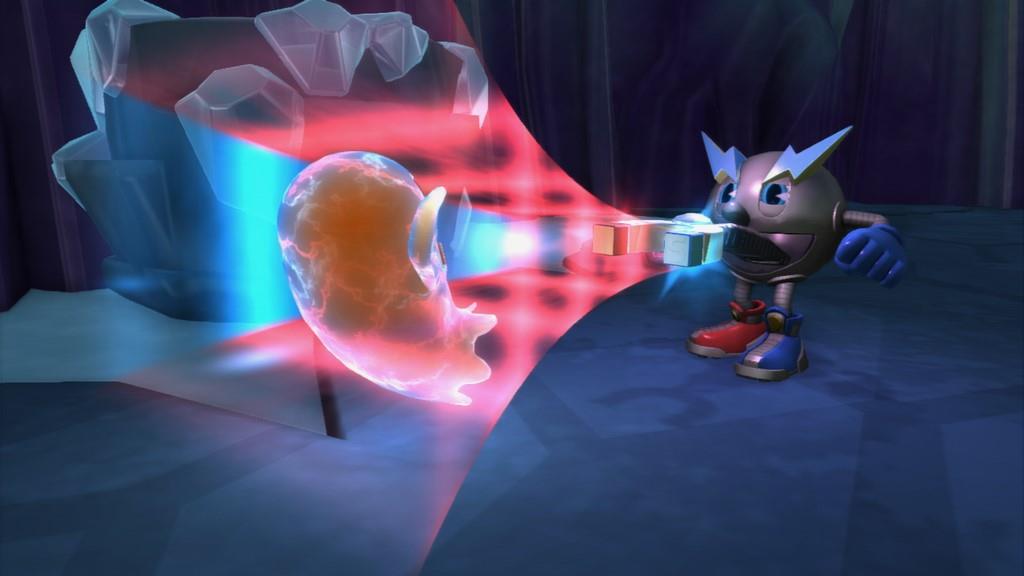 Pac-Man and the Ghostly Adventures

I'm going to be honest, I've never played a Pac-Man game outside of the original arcade version. I've been dimly aware of the Pac World series and I know there was a Pac-Man cartoon in the eighties, because I've seen "Christmas Comes to Pac-Land" in the Walmart bargain bin. So I was surprised to hear that not only is there a new Pac-Man cartoon called "Pac-Man and the Ghostly Adventures" on Disney XD, but it already has a video game tie-in with the same name. Basically, the premise of the show is that Pac-Man is an orphaned teenage superhero that fights armies of ghosts with his friends. Pac-Man is the only Pac-Person with the ability to eat ghosts, so he was pretty much made for the job. Still with me? Cause it's about to get weird. The reason Pac-Man is the only one who can eat ghosts is because all of the yellow Pac-People were killed by a hitman named The Pacinator. Think it's getting a little dark for a kid's show? Don't worry, because most of Pac's time is spent fighting a megalomaniac ghost named Betrayus (Seriously? You might as well name your villain Evil McBadguy) and his aptly named lackeys the Butt-ler and Dr. Buttocks. But enough about the show, we're here to talk about the game.

Pac-Man and the Ghostly Adventures is very much a kid's game. I don't just mean that it's rated E for everyone- I mean that this game was obviously designed for kids. Chances are if you're buying a videogame tie-in for a show on Disney XD, you're buying it for a kid. Unless there's some kind of Brony culture for Pac-Man that I don't know about.

Ghostly Adventures is a 3D platformer with lots of alternate routes, bonus levels and gameplay shifts to keep things interesting. Your main attack is a chomp that swallows ghosts whole, but the world is littered with Power Berries that give you special abilities like a freeze-ray or a magnet that draws ghosts to you. The best part about the Power Berries is that they do a lot more than give you different ways to ghostbust, they change up the gameplay entirely. For example, when you eat the granite berry, Pac turns into a giant boulder and you're suddenly playing Super Monkey Ball; when you eat the metal berry, you get to navigate these awesome multi-surface 2.5D magnet-mazes. The best part about Ghostly Adventures is the level design- while it's predominantly a platformer, almost every level has something to keep the game fresh, whether it's a 2D maze, a slide section, a new power up, or a boss.

The graphics in Ghostly Adventures are similar to the animation in the show, which unfortunately makes it look like a game that could have easily been released on the Gamecube. But you can't have the tie-in look better than the show, can you? The only unforgivable flaw in Ghostly Adventures is the controls. The control scheme is simple enough, you only use the joysticks and main button pad. But in an effort to keep the controls simple, you're stuck with a wonky auto-targeting system that always goes for the closest enemy. It's not anything game breaking, but leads to some frustrating moments. Like when you really need to freeze a group of enemies but you can't hit them since they're all behind someone you already froze, or when you're chomping down ghosts and you take a dive into a pit of lava because the closest one was floating over a ledge. I understand wanting to keep it simple, but just having the option to hold down R1 to lock onto a target would have been nice. Also, the movement controls were a little too loose. You need precision in a platformer, and Pac-Man isn't as responsive as I would have liked- but again, it wasn't anything game-breaking, but was frustrating at times.

The story is the standard 'good guy stops the bad guy from taking over the world' scenario. I didn't expect any heavy story lines or character development, but I wish a bit more time would have been devoted to presenting the plot. The story was delivered in sixty second cutscenes where you would be told 'Well, while you were playing this level, Betrayus kidnapped your friends. So, go get them.' I would have appreciated a little more time spent animating cut scenes to fill out the experience. Don't just tell me something happened and send me on my way, show me in a cut scene! 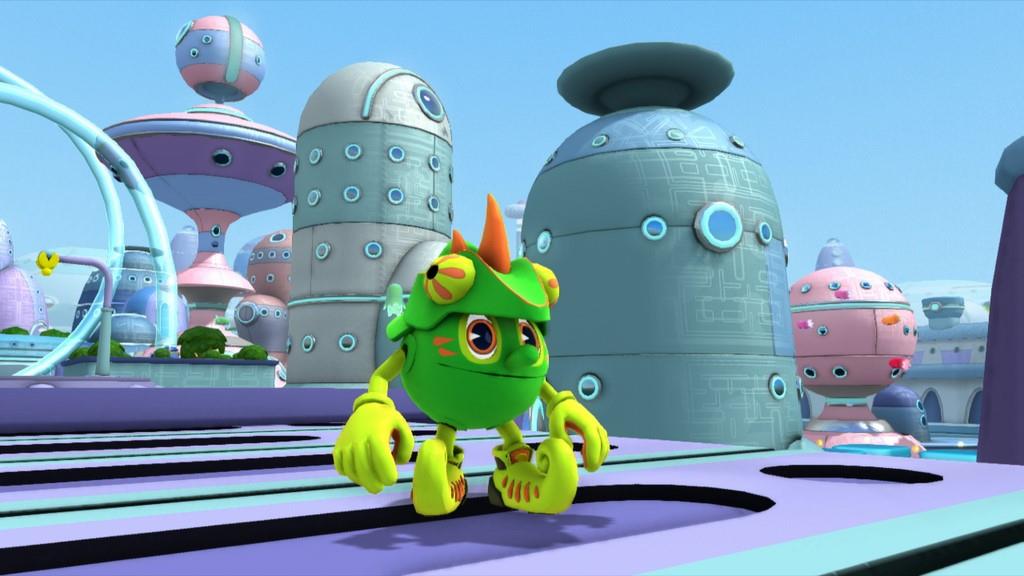 There's plenty to do outside of the main storyline. There's bonus levels in every world, four minigames and a multiplayer mode. You unlock the minigames as you progress in the story, and while they don't really give you anything but a high score for beating them, they're pretty fun. There's a Gradius-style side shooter, a Think Tanks-style game, a helicopter rescue game, and a game similar to the half-pipe bonus stages in Sonic 2. In the multiplayer mode you play as the ghost gang: Inky, Blinky, Pinky and Clyde. It's similar to the battle mode in Mario Kart, where you have a 4-player split screen and can run over power ups to attack the other players; but instead of going after each other, the goal is to be the first to kill Pac-Man. It's an interesting re-imagining of the original Pac-Man game, but doesn't really hold up to extended play unless you have 2-3 really competitive friends.

Even though it isn't without its flaws, Pac-Man and the Ghostly Adventures is a well designed game for kids. It's got some really cool challenges and it changes up gameplay often enough to keep it from getting stale. If you have a kid that already watches the show, they'll probably love it. Or if they're new to videogames, this'll be a good introduction for them.

Even though it isn't without its flaws, Pac-Man and the Ghostly Adventures is a well designed game for kids. It's got some really cool challenges and it changes up gameplay often enough to keep it from getting stale. If you have a kid that already watches the show, they'll probably love it. Or if they're new to videogames, this'll be a good introduction for them.