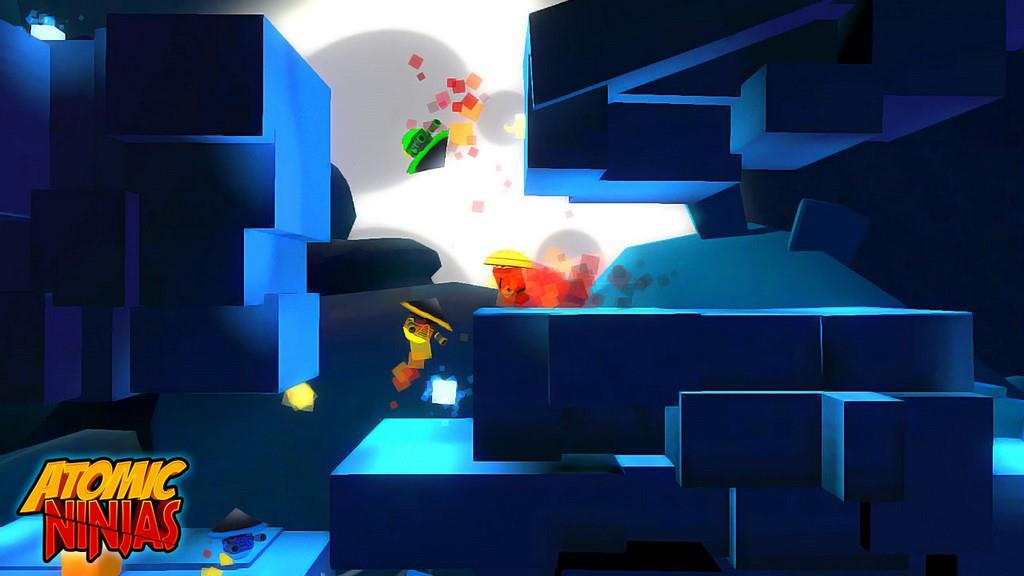 A lot of things go into making a good game. An interesting story, enticing graphics, and a catchy soundtrack are all important, but gameplay is arguably the key feature of any game. If your game is fun to play it can rise above any of its other small issues and still be great. As a multiplayer-only platformer/brawler, good gameplay is all Atomic Ninjas needed to be a fun party game. Instead, its awkward physics and odd mechanics make it one of the more frustrating games I have ever played.

Atomic Ninjas opens with a short cartoon showing a sleepy nuclear plant worker accidentally hitting a button and blowing up the world. Having apparently provided sufficient background as to why the game is called Atomic Ninjas, we are thrust into a gameplay tutorial where a stereotypical sensei who speaks in broken English teaches us how to move and fight. The tutorial is already off to a bad start. As you start to move around you will notice your walking is too slow, your double jumps are too fast, and your character bounces when he lands. You get stuck walking up hills, and awkwardly slide down them. For some reason you cannot use the D-pad in game, which would have helped with the precision platforming some of the stages require. 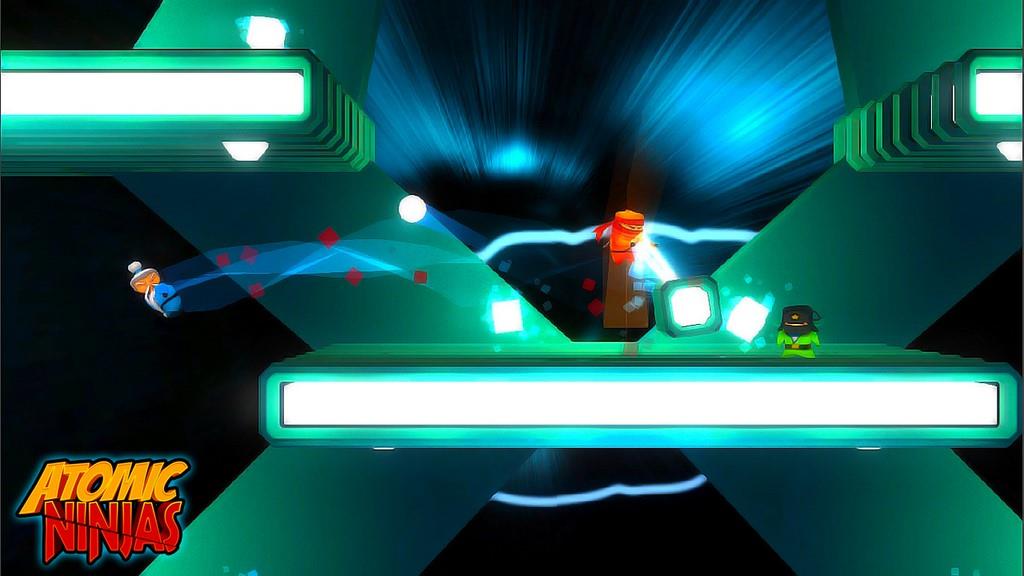 The combat reminds me of a simplified Super Smash Bros as you have a group of four players move around a big 2.5D stage and attempt to knock each other out of bounds and into hazards. You can choose between three simple attacks: shuriken, punch, and force grab. The punch is a basic melee range weapon that pushes back nearby foes. The shuriken is a weak-ranged weapon with a limited number of charges before it has to reload, and the force grab lets you throw boxes that are scattered around the stage. These boxes have a variety of purposes, but often end up becoming death traps any time they move in the slightest, resulting in many suicides. You also have the choice of three traversal items: a grappling hook, claw-jump, and rocket. The grappling hook lets you swing from hooks on the ceilings, the claw-jump lets you dart around the stage and tackle opponents, and the rocket lets you fly upwards for a short time. The combat is functional, but always devolves into a storm of spammed projectiles and punches that favors chance over skill.

Once you find an item combo that works you can jump online and maybe even have a few moments of fun, but before long cheap deaths resulting from random projectiles, boxes, and platforming glitches will quickly drag your mood back down. The worst offender of all is a feature called “Noob Rage” -- invincibility granted to a player for dying a lot. When Noob Rage is active the music cuts out and is replaced with growling and shrieking noises that are among some of the worst sound effects I’ve ever heard. The player keeps their rage for a long time, or until they earn a kill or score a point. I can understand trying to help struggling players, but this feature doesn’t feel fair to more successful players that are practically forced to give up a free kill to make it end. 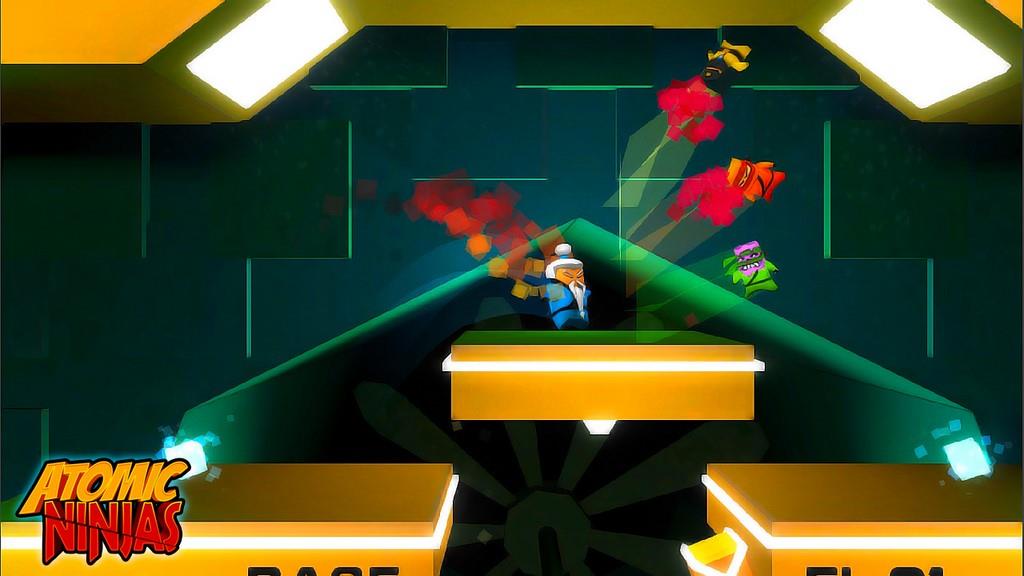 You can play both locally with split screen and online, though finding four people online is difficult due to the sparse community. Luckily, you can have bots fill any empty positions if you can’t find a full group. There are a variety of games modes, including deathmatch, capture the flag, king of the hill, and a few others that are variations of these modes. All are available in team and solo varieties, and match durations are either five, 10, or 15 minutes. The most interesting game is Team Objective, which is a series of short 2v2 games with the teams changing in between each game. Players retain point totals even after a partner change, which gives less skilled players a chance to rack up points while with a more skilled teammate, giving them a chance at victory. Wins level up your Ninja Rank and unlock more characters. Each character has a different load out and appearance, but they all play the same. There are also Ninja Trials, such as “Kill three enemies with shurikens,” and completing these unlocks passive character bonuses such as quicker movement or stronger punches.

The graphics remind me of a high-end flash game, especially the bland stages. There are six stages, most of which consist of a bunch of misshapen platforms, randomly placed hazards, and a one-color scheme. Even though there are only six in all I could hardly tell them apart, especially when they have lifeless names like “Cave” and “Spooky.” The character designs are neat, each with their own unique details, though at least one is just a color swap of another. There is even a little bit of voice acting, though sadly most of it is stereotypical lines like, “I have disgraced my family!” that sometimes border on feeling racist. The music, however, is actually pretty fun, consisting of a few different high-energy tracks that remind me of cartoon show themes. It perfectly matches the goofy tone of the game.

The cartoon show comparison is actually quite fitting since this game feels more like a browser game I would find on Cartoon Network's website rather than a $10 downloadable title. I feel like the idea of a simplified Smash Bros. actually has legs, but Atomic Ninjas just isn’t polished enough to make that concept a fun, playable reality.

*Platform differences: Atomic Ninjas is nearly the same game on PS3 as it is on Vita. The PS3 visuals are much better thanks to the bigger screen, and I experienced less lag on console as well. The controls are the same, and the Vita version isn’t lacking any features. However, the game doesn't have cross saving, which means my progress on PS3 did not carry over to Vita.

Atomic Ninjas had the potential to be a fun brawler for four friends, but falls flat due to problematic controls and wonky physics.