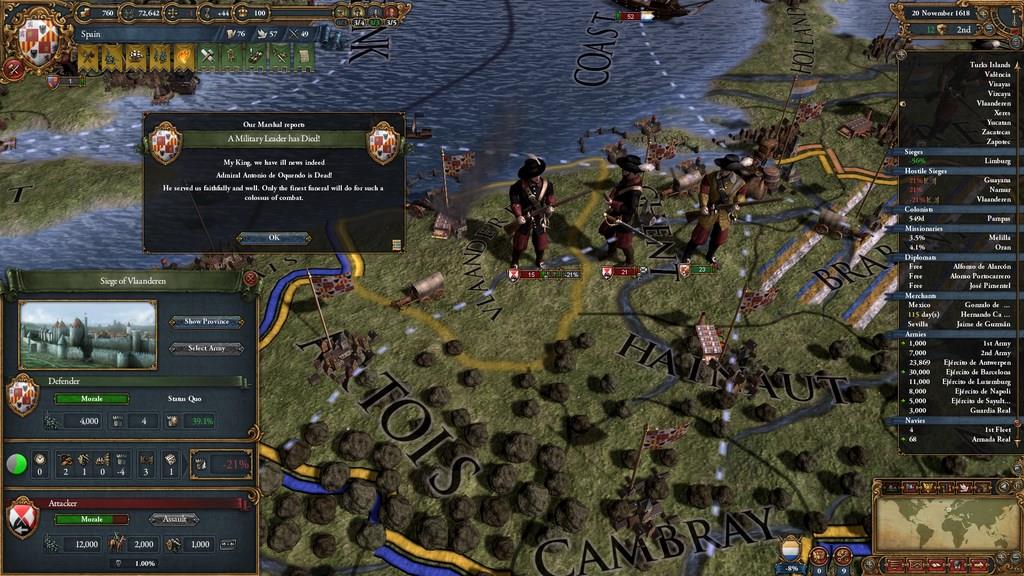 Written by Tom Bitterman on 10/14/2013 for PC
More On: Europa Universalis IV
Names have power.  There are schools of thought that maintain that when you name something, you shape its future.  That is why I think you should name your next child “Europa Universalis”.

The biggest advantage to this (admittedly unorthodox) move is that your child will turn out to be intelligent.  “Europa Universalis IV” (EU4) is a sprawling, complicated game.  There are somewhere around 1500 land provinces, each of which has a base tax value, base manpower, population religion, population culture, owner, trade goods, terrain, revolt risk, buildings and probably others I have forgotten.  Each of these factors can affect, and in turn be affected by higher-level things: military presence, country tech level, buildings in province, and more.  In fact, when listing game elements, I am going to stop saying “and more”.  Just treat each list as illustrative rather than exhaustive.

Your child will also have an appreciation for how low-level and high-level features can feed back into each other.  For example, and important property your country has is “stability”.  The more stable your country is, the better everything seems to work – you army has higher morale, your trade posts generate more trade, your provinces pay more taxes and grow faster.  All of these benefits make it easier to become even more stable.  It is a virtuous cycle, the sort of cycle every ruler wants to be in.  An important part of doing well in EU4 is finding these little virtuous cycles and riding them.

The opposite is true, also.  Start a stupid war and your stability can go down.  Then your armies will lose morale, making battles harder to win, raising discontent, which further lowers stability.  It can get to the point that your own provinces will start rebelling against your incompetent rulership.  Sure, sometimes one needs to do something (start a war, take a diplomatic action) that will start a downward spiral.  The point is to get off in time, and with enough gained that rebuilding will leave your country better off.

An important lesson in growing up is learning when to fight, and whom, and how.  It is no different in EU4.  Paradox has continued its tradition of balancing the need to expand with penalties for expanding too quickly.  Bigger countries are, in general, better off – wealthier, technologically more advanced, with bigger armies and greater stability in the face of adverse events.  The goal of every ruler should be to grow their nation as big as possible.  The downsides of expansion are two-fold: your new subjects may not like you, and your neighbors now fear you.  New subjects, if they come from different cultures or religions, are especially likely to start a revolt and throw off your benevolent yoke.  Your neighbors, if they fear you enough, will take up arms to stop your mad plans of world conquest.

With everything at stake, picking your enemies is important.  Since EU4 is at heart a simulator of historical forces your best bet is to pick on places that your kingdom historically contended with.  For example, the kingdom of Orleans considers Burgundy a threat, and desires to conquer it as part of a bigger quest to create the kingdom of France.  EU4 rewards “realistic” play, both in terms of special bonuses (quests, bonuses for creating historical kingdoms) and through the world itself (it is simply easier to fight the guy next to you, just like in reality). 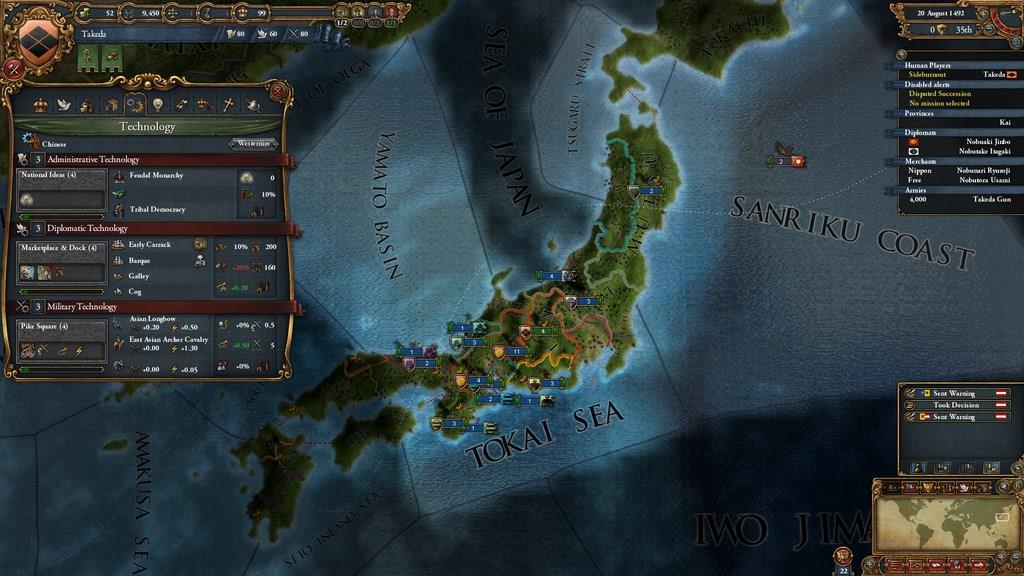 Another life-lesson they will have a head-start on is what to do when they are not fighting.  In Eu4 this breaks down to two options: get smarter or get bigger.  Getting smarter depends primarily on your king.  The better he is at being an enlightened monarch (the more Monarch Points he generates) the faster you can discover new techs.  These technologies fall into four groups: administrative, diplomatic, military, and Ideas.  Administrative techs improve the way your kingdom runs, mostly increasing stability and income.  Diplomatic techs help you deal with the outside world, primarily trade, colonization, and diplomatic influence.  Military techs increase military power by providing access to more powerful troop types, higher morale and better tactics.

Ideas are packages of techs that a country can choose to help specialize it.  For example, budding theocrats can take the “Religious” Idea track, which provides opportunities to research techs that improve religious cohesion, missionary activity and smiting infidels.  National Ideas are a special type of Idea that each nation gets for free at certain points in their development.  These Ideas help differentiate most important countries by nudging them in historically plausible directions.  Great Britain, for example, has National Ideas that center around naval power and trade.  The Papal States National Ideas center around prestige and diplomatic effectiveness.

Sadly, one cannot expect a child to turn out perfectly.  Little Europa Universalis (EU to his friends) will be hard to get a feel for, at least initially.  You will spend a lot of time trying things, looking for ways to make an understandable difference without getting anywhere much.  There are so many systems, each of which has an impact on so many things, that you are probably better off you going Zen wit the whole thing.  Do not try to min-max.  Bring cheat codes.  Accept that it will be a long time before you really have a good grasp on what, exactly, the game engine is doing.  Just chill and accept that the experience of playing is fun, and the details will come to you eventually. 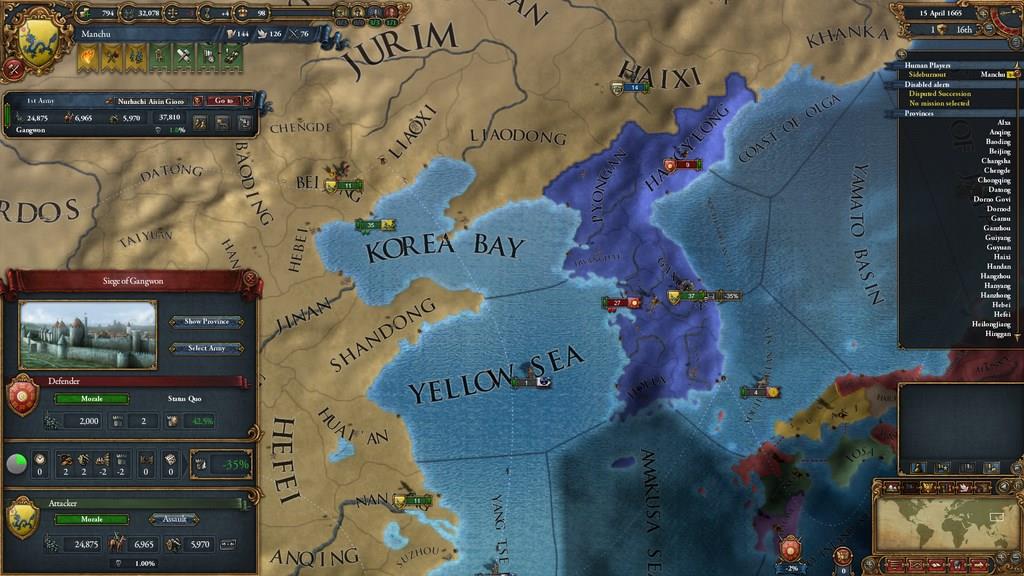 There are tutorials, and they work well enough to get the basics established, but they are wildly inadequate in terms of explaining what the heck is going on at any point.  It can be really tough to answer such questions as “Why am I losing 0.3 ducats a month?” and “What should I do so that I don't?” and what would the effective difference be, just in a budgetary sense, between lowering my land forces maintenance or spending points to up my stability?”.

Last but not least, Paradox still can't fix their combat system.  What is wrong with these people?  The casualty system is just awful and can suck the fun out of an entire evening.

In summary, you should name your kid “Europa Universalis”.  He will be intelligent and deep, with a fine understanding of the interplay between grand military strategy and its economic substrate.  He may not make friends easily, but spend enough time with little EU and it will pay off handsomely.
The newest installment in the “Europa Universalis” franchise is yet another evolutionary step forward. If you liked EU1 – EU3, you will want to pick this one up. If you are interested in grand strategy and you have not played it, you should pick up a copy. If only they could fix the combat system.