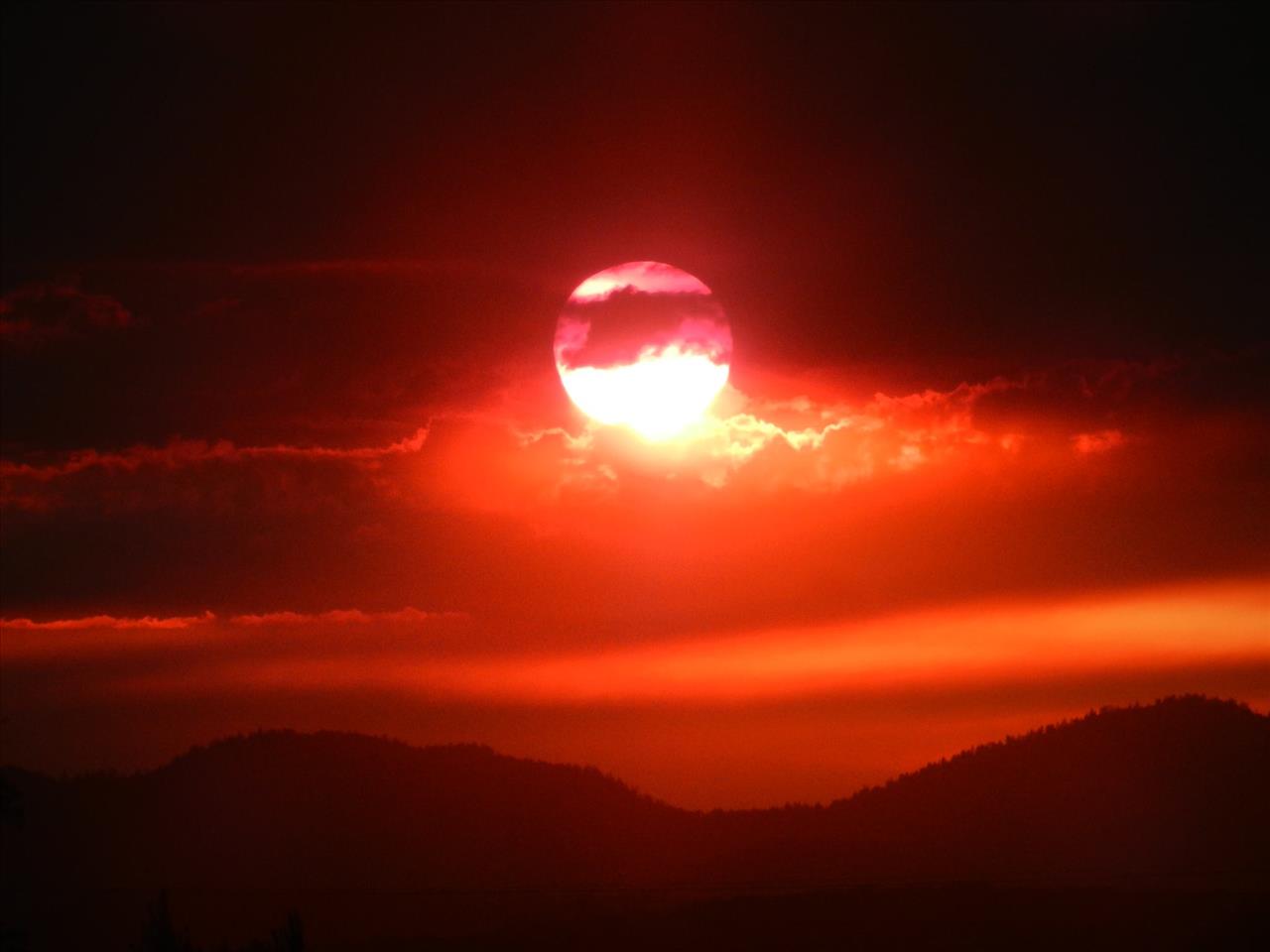 Any Given EVE: Highway to the Danger Zone

Written by Randy Kalista on 10/4/2013 for PC
More On: EVE Online
After a four-year absence, Randy returns to EVE Online's massively multiplayer galaxy of internet spaceships and rampant scam artistry. This series depicts some of the things he’s seeing, and some of their parallels to life in general.

[Previous episodes: Get a Job, What Am I Even Doing Here]

Thunderheads loomed around my small southern Oregon valley. Thin tendrils of forest fire smoke crept over the blue-green Coast Range hills. Heading from afternoon into evening, the smoke then sprawled across the western horizon and turned sunset into Armageddon. I expected a guy wearing a sandwich board yelling, “The End Is Nigh!” to stumble through a Best Buy parking lot. The next morning, still wiping sleep out of my eyes, I saw that the smoke had crawled its way east and turned the sunrise into one of those Sailors Be Warned-type mornings. 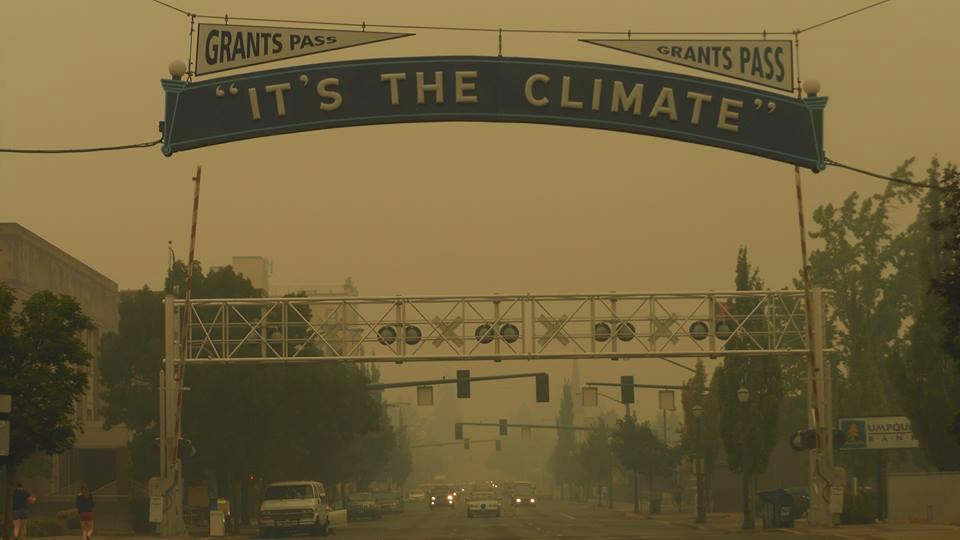 Oregon was burning, and it was making some of the most beautiful skyboxes I’d ever seen. At first. Evacuations were underway only 30 miles west in the town of Grants Pass, and my Facebook feed filled up with statuses like, “John’s been coughing all night. Can’t sleep,” and, “Walmart is out of dust masks -- I hate my life,” and, “Jenny’s sinuses are bleeding from smoke inhalation. Emergency room smells like campfires and B.O.” Despite all that, my wife and I went on living here, spending as much time indoors as possible, using air conditioning when driving in the car, but still ultimately breathing what became, for several weeks, the worst air quality in the nation (at least according to the Department of Environmental Quality). Couldn’t see half a mile in any direction. We were near dangerous ground and we knew it. 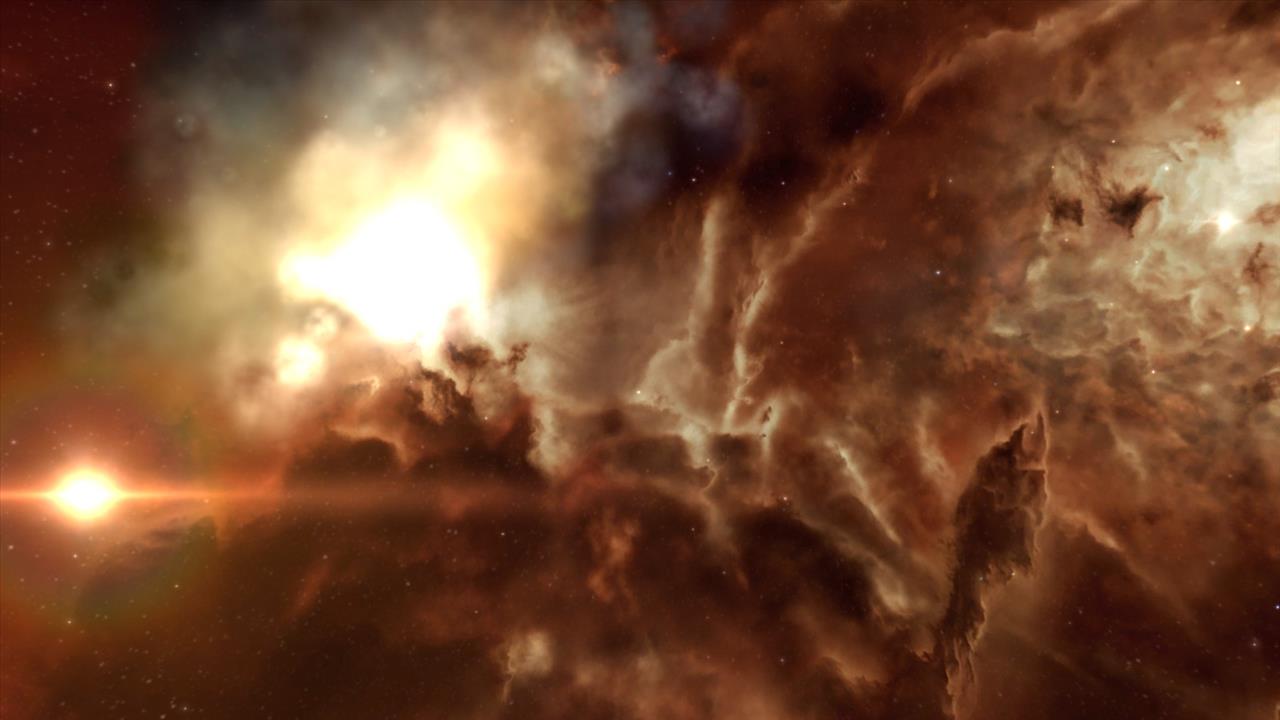 Along with the lovely skies in forest fire-ridden Oregon, the skyboxes in EVE Online sucker punch me too, time and time again. Even on a low-end seven-year-old laptop that’s been out of production for years, kicking around the EVE universe on the lowest graphical settings ain’t too shabby. The EVE pics posted in this article series are all screenshots I’ve personally taken. 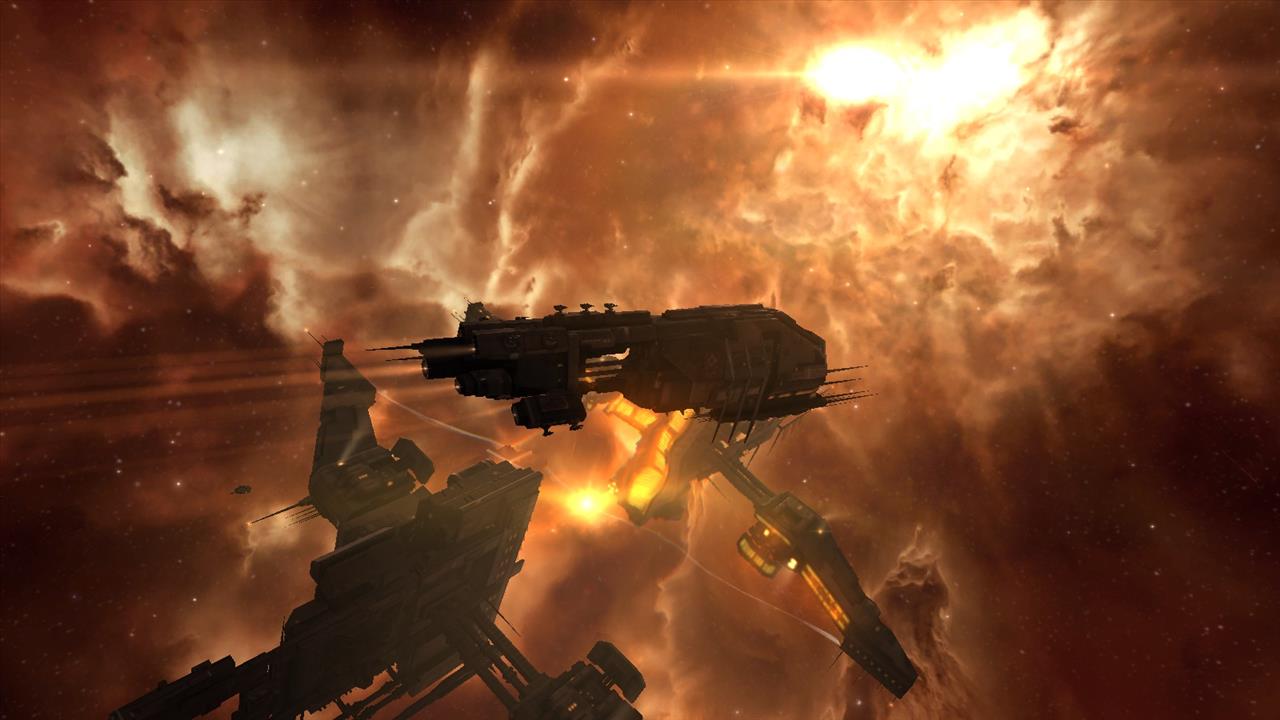 For me, the Minmatar system is home base. It’s the little corner of this 7,800 star system map I’m most familiar with. It’s home in a game that sometimes -- intentionally or not -- can make you feel transient, homeless. Rust-colored gas clouds enclose the region like a maw. It feels like I could be swallowed up and taken into the belly of a God-sized crustacean. And every time I leave, every time I hit a jumpgate that chutes me into unfamiliar space, I have an image in my head of pincer-like arms, shackling my ship by the ankles, pulling me back into Minmatar space like a crab in a bucket. 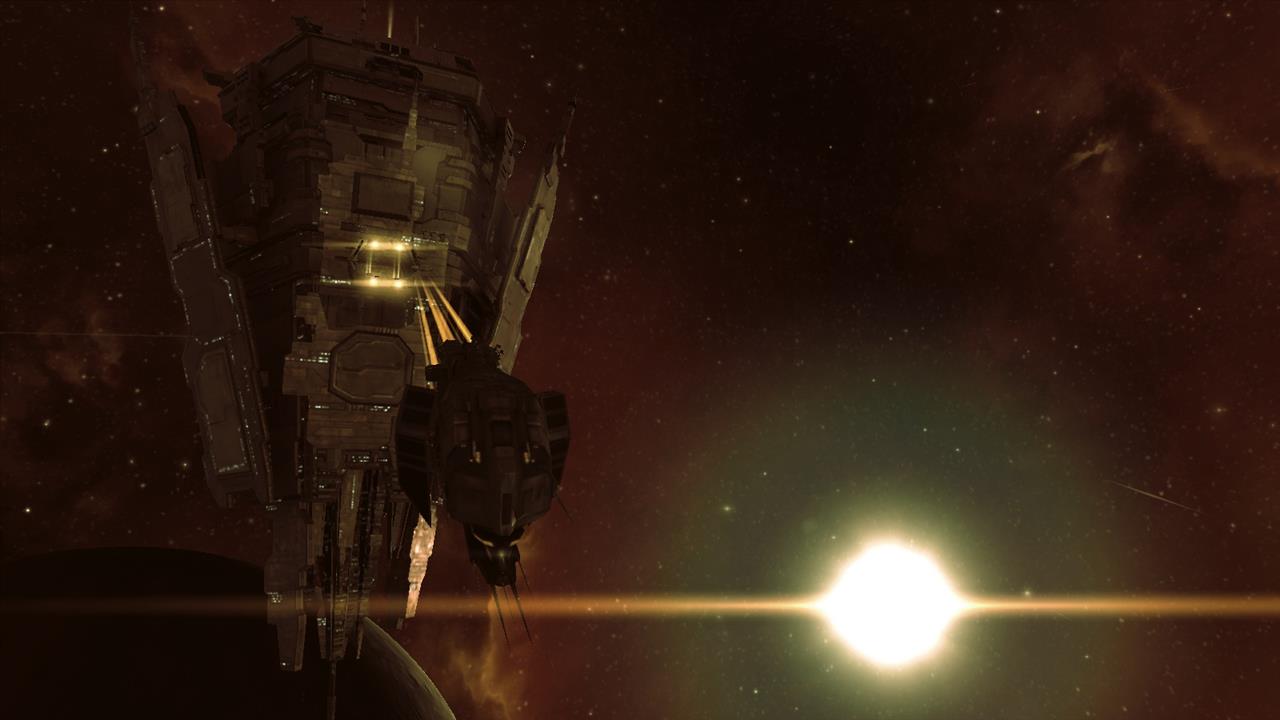 Once or twice, I've dipped my toe into Caldari space, and could feel the wind chill factor from its icy, corporate coolness. I've splashed down into Gallente space, and felt like I was drowning in democracy and sea foam. I've run over to Amarr space, and felt the blood and the nine-inch nails tap-tap-tapping away into the palms of my hands like stigmata. 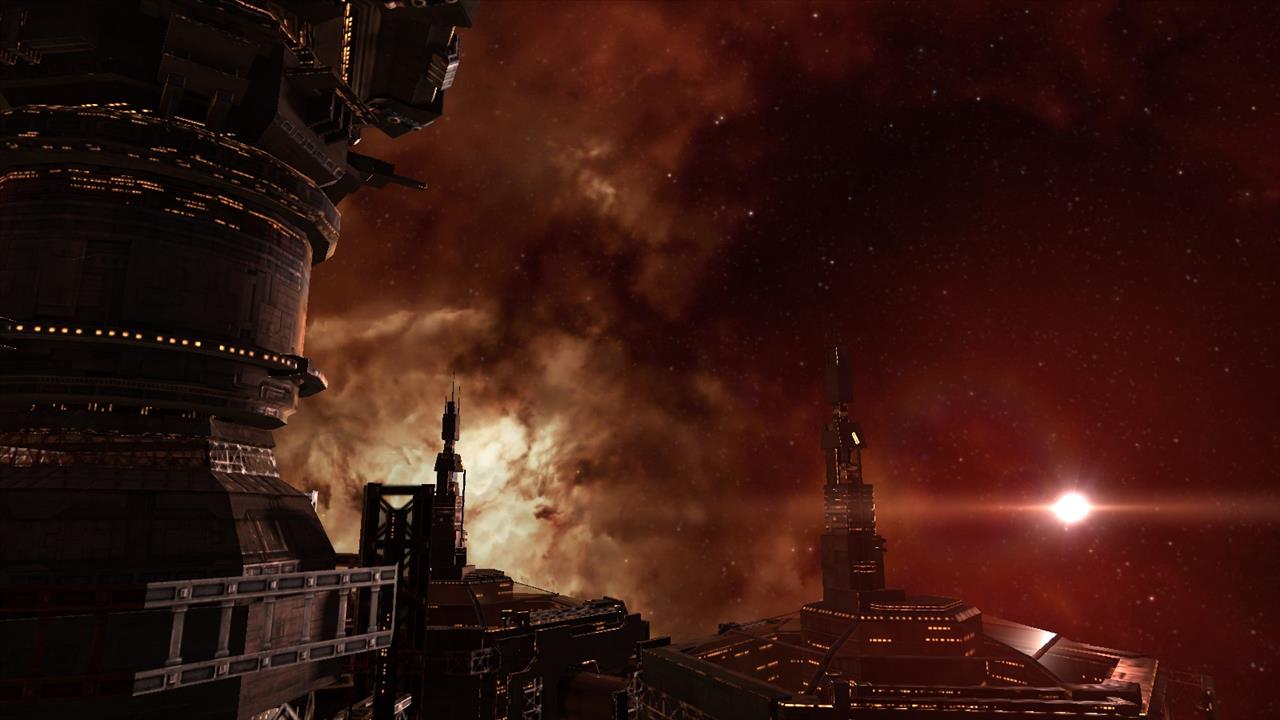 No matter where I go, I often shiver, do an about-face, and head back into the earthy, brown, digestive embrace of the Minmatar. Like in Oregon, I’m a stone’s throw away from dangerous ground in EVE. It’s not exactly no man’s land, but it’s certainly no man’s land to a lone wolf such as myself. There are thousands upon thousands of players that log in every day, scanning solar systems for individuals like me that are dumb enough to run through low-security space alone, unescorted, and without backup. 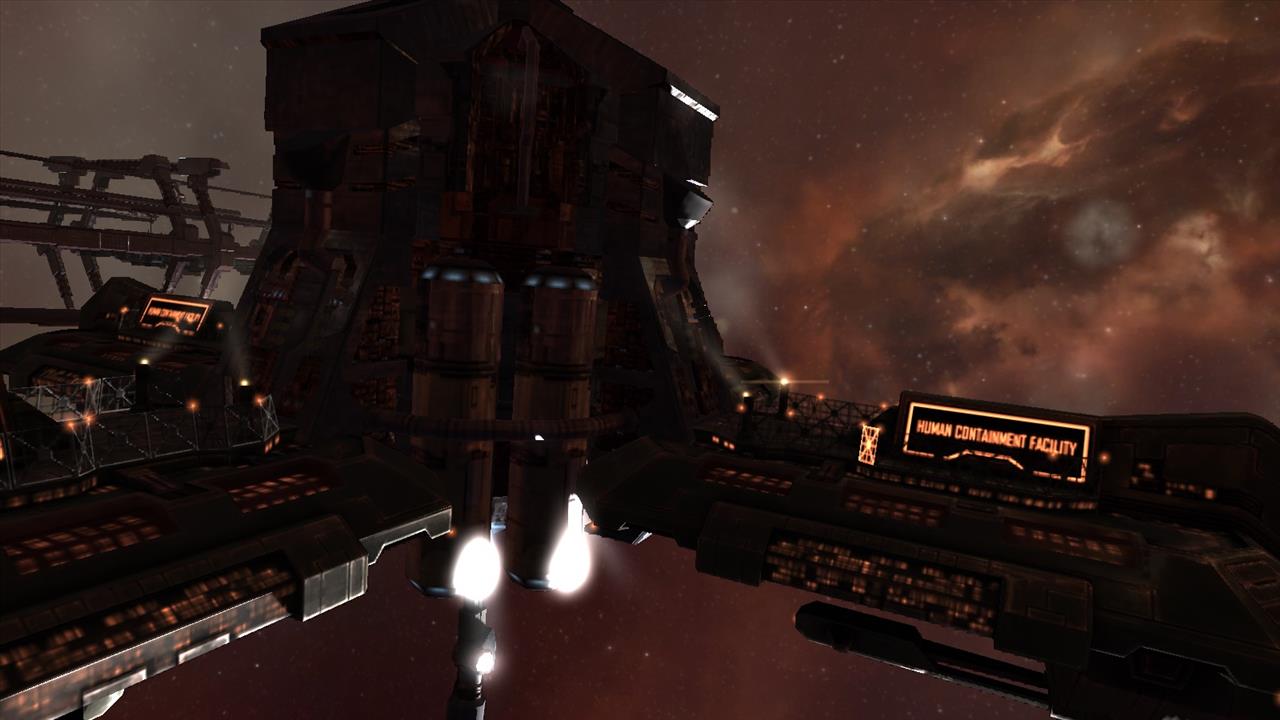 No, I’m not a lone wolf by choice. I’d put in an application to EVE University a month, maybe two months ago. EVE University is one of the oldest and most prestigious player-run corporations in EVE Online, almost as old as EVE itself. The University’s mission is to enlist players and equip them with the know-how to go out and fulfill their vision in EVE, or have players stick around as instructors and pass their knowledge onto the next batch of recruits. Either way, EVE University is populated with bona fide good guys, paragons of EVE, with a heart for the game and for helping others out. 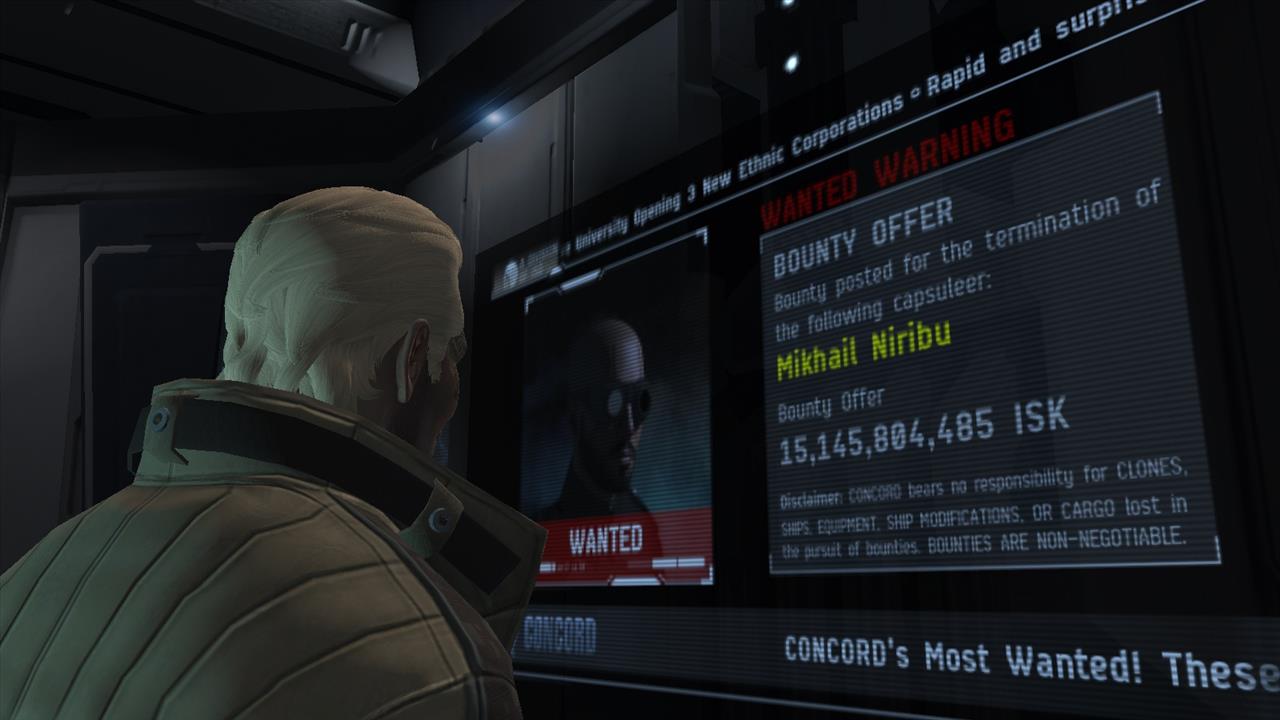 Let’s not kid ourselves, though. There are bad people everywhere you go, even if they’re simply acting out their bad intentions in a video game space because it’s a video game and that’s a space where you can safely act out bad intentions. No judgement here, especially in EVE where spying and espionage is not only within the bounds of the game, but celebrated by media outlets intrigued by the anything-goes gameplay. It’s the very reason why EVE continues to make headlines, despite the fact it’s over 10 years old and makes up only a tiny, tiny fraction of the population playing massively multiplayer online games. 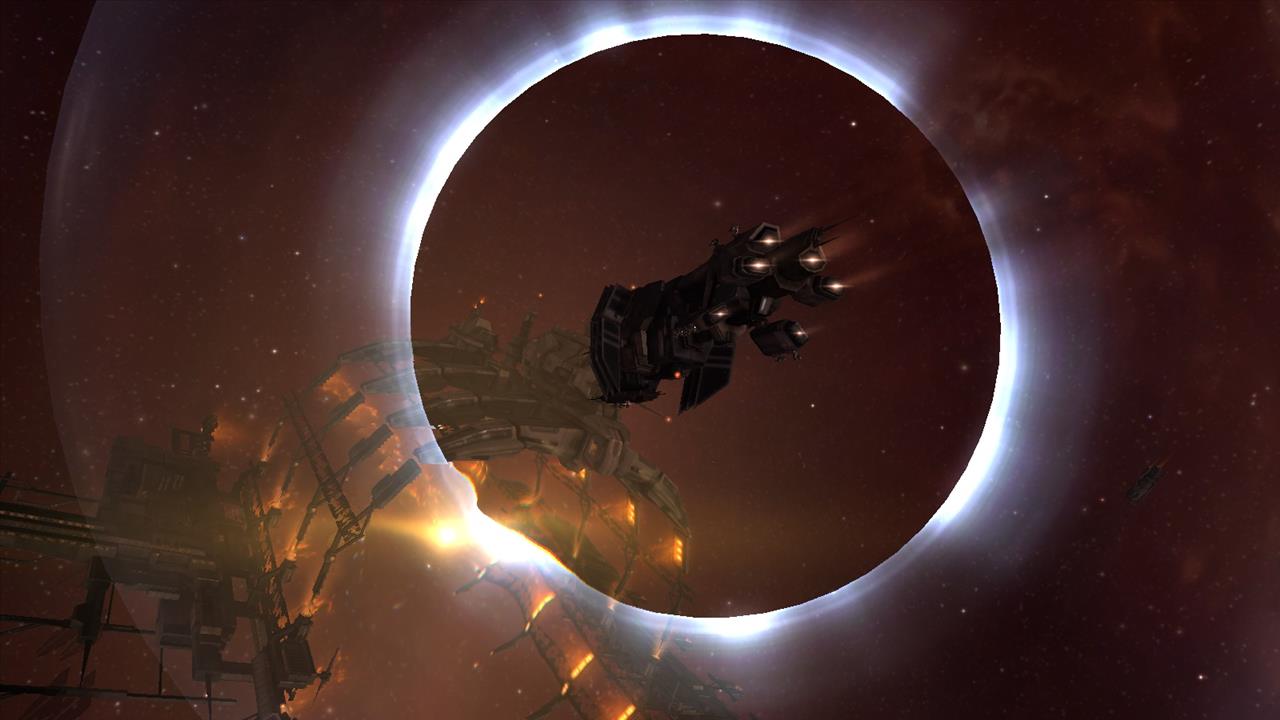 But, to my knowledge and limited experience, having monitored the EVE University’s in-game chat channel, and having logged into their Mumble server night after night, I've only heard and interacted with individuals truly interested in knowing if you’re having a good evening, and if you really have questions you would like answered. It doesn't matter if you need advice on ship fittings or date night suggestions with your significant other in real life. 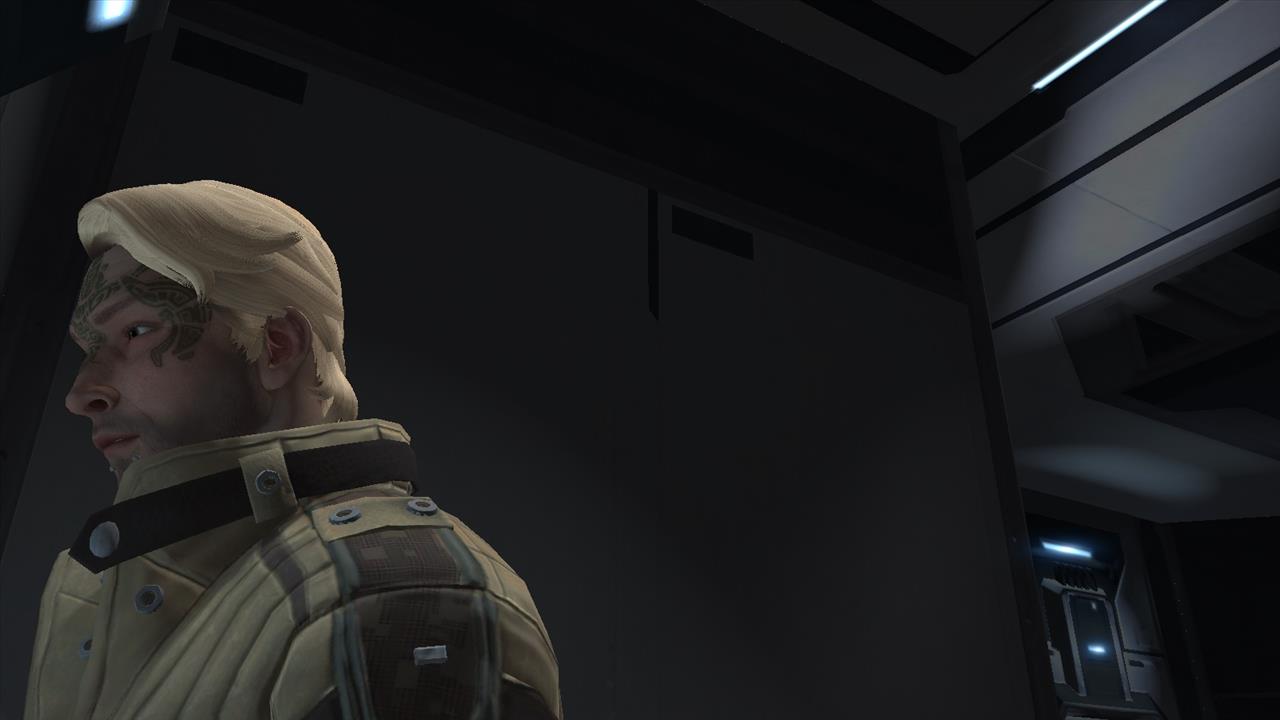 I want to fly wingman for these players, and I want these players to have my back too. Without hesitation, I would surge into that no man’s land with these guys, jump ahead into a low-security system to scout what’s on the other side of the door, and lock down opponents with tackling gear while EVE University sells everyone tickets to the gun show. 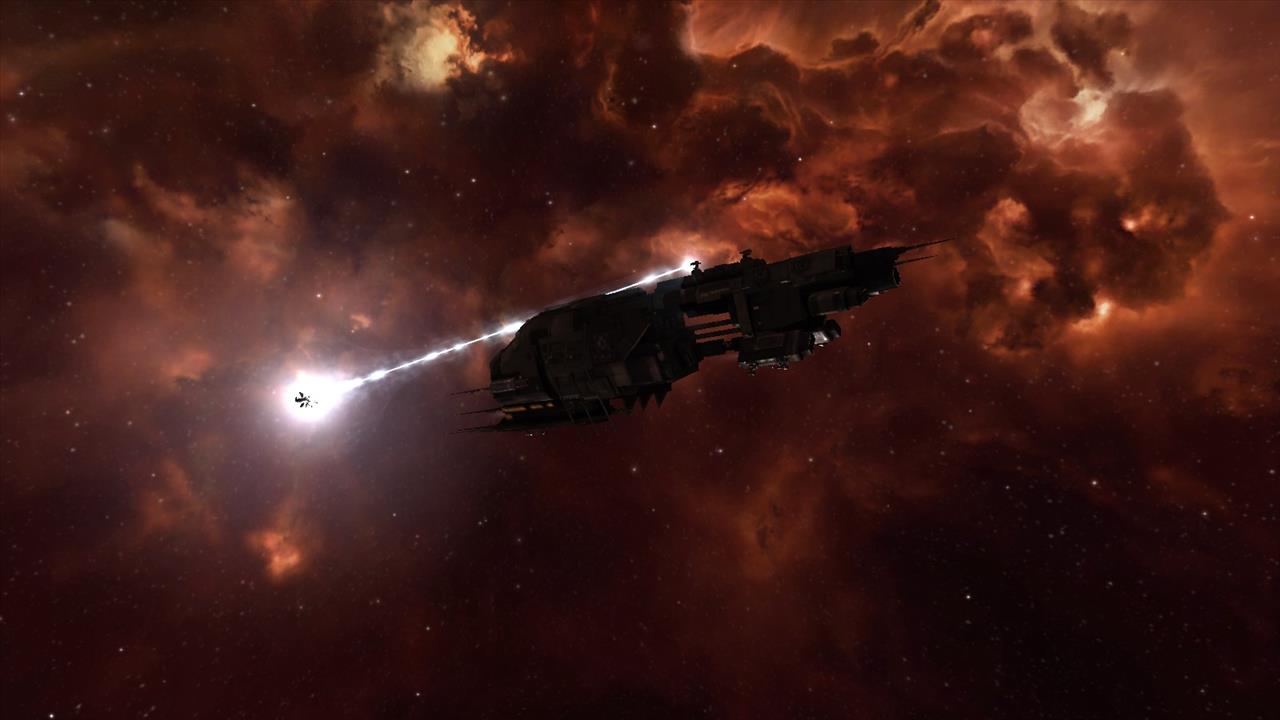 Due to a convoluted application and interview process, however, I won’t be joining them. I've answered all of EVE University’s questions. I’ve checked all the boxes. And I’ve even passed whatever initial psyche evaluation they filter applicants’ questionnaires through. But, night after night, which turned into week after week, I sat in their highly organized line of interviewees, waiting for my final thumbs up from an EVE University personnel officer. My number was never called. 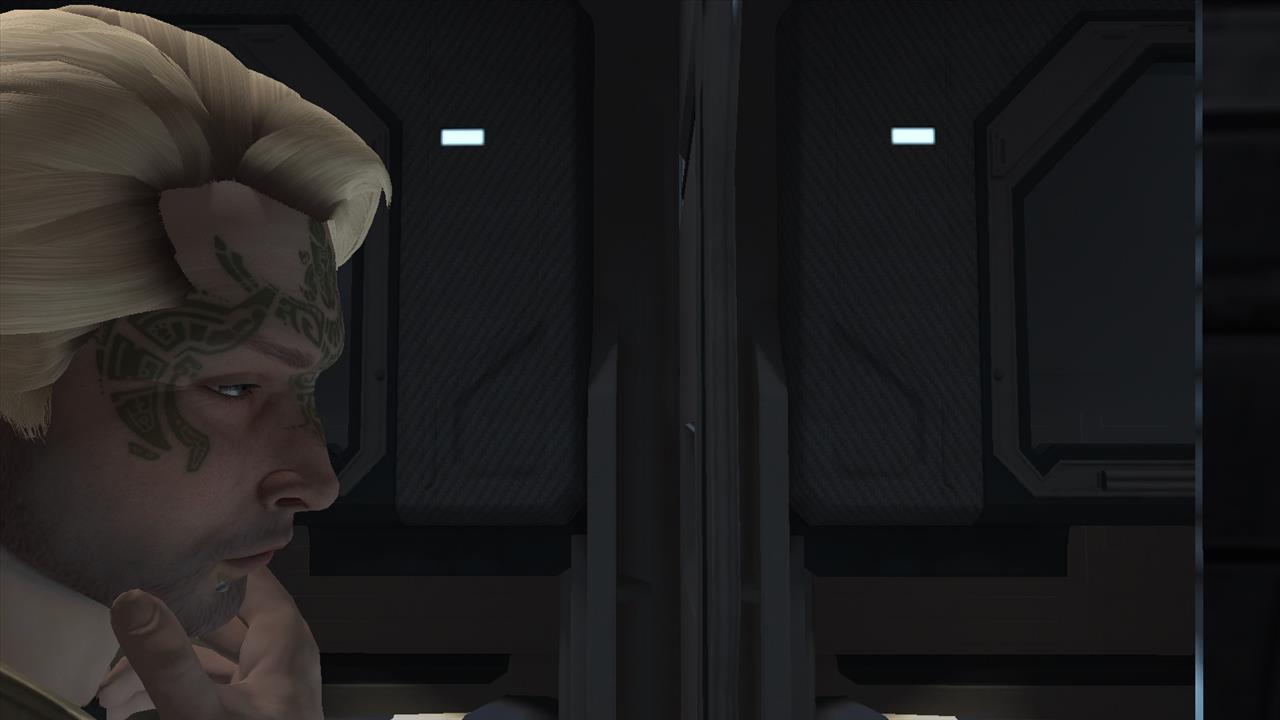 They’re busy. I understand. I get that. If I worked in the human resources department for one of EVE’s most popular corporations, I’m not sure how many interviews I could conduct every night before putting a gun to my own head. It’s just a game, and I’m sure the recruiters would like to have a little time to run out and blast a few pirates more than wave in the next newbie for some last-minute questions. 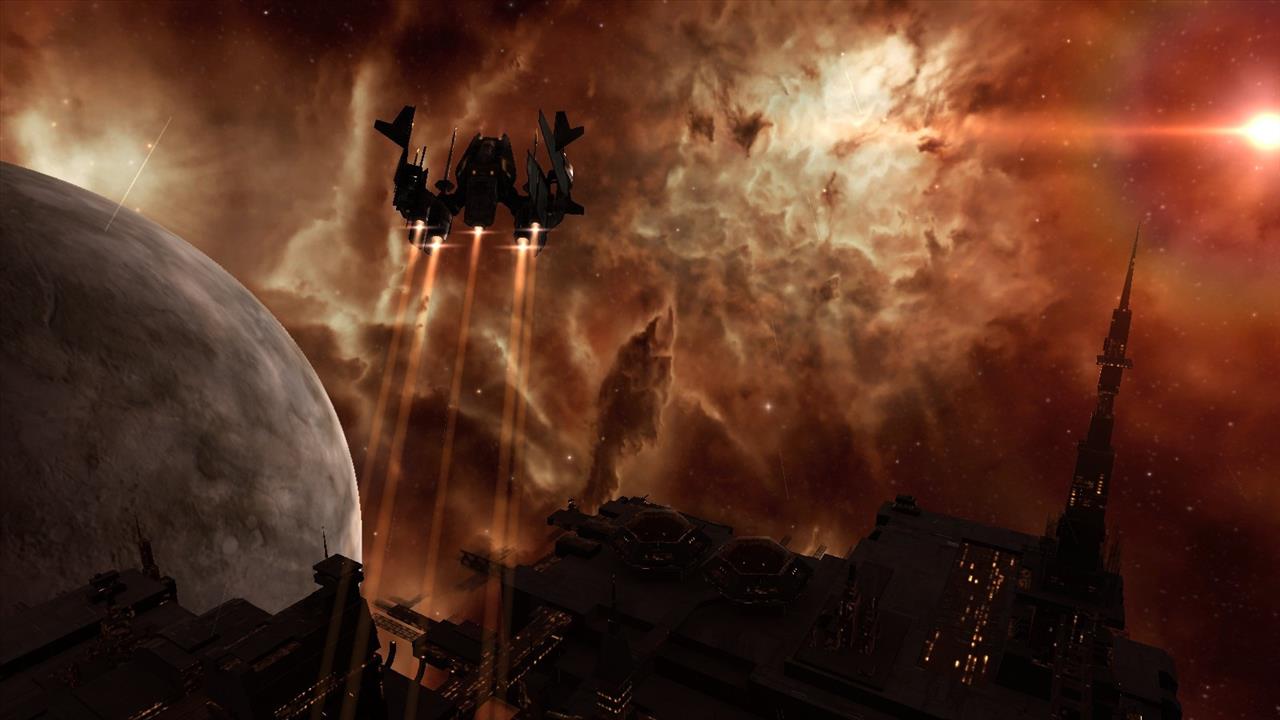 But I’m personally done waiting for an interview to come that’s simply taken too long to arrive. For over a month now, I’ve logged in, placed myself in line for that final review, then eventually logged out as the clock tick tocked past my bedtime. EVE University must be hiring. I’ve received an in-game email from them indicating that I was even placed on a fast track for recruitment. That fast track, though, never got me anywhere. 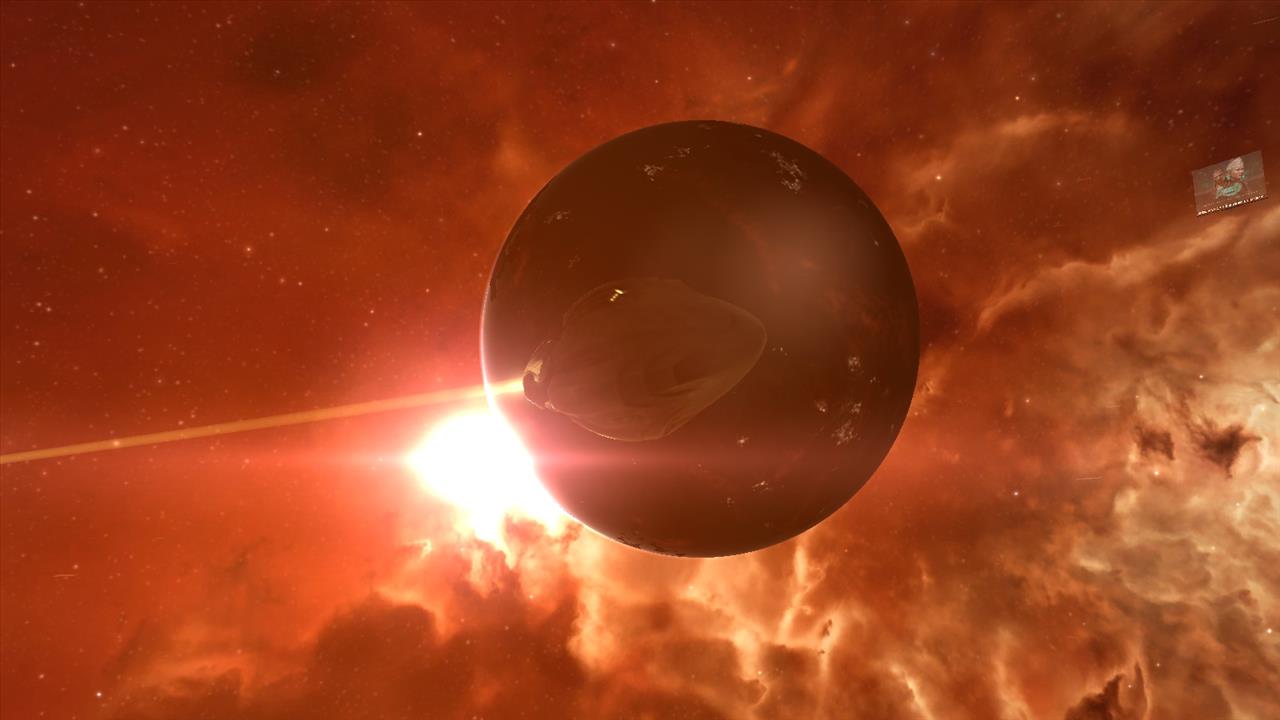 So I’m moving on. I’m leaving EVE University’s home system and seeking out a smaller, hungrier corporation. In fact, one individual just opened up a private chat channel with me and asked me if I wanted in on the ground floor of a new corporation operating in low-security space. Low-sec space is where a lot of the adventure happens in EVE, and that’s where I want to be. I want the heart-pounding knowledge that there’s a clear and present danger when I undock. I want my adrenal glands to steadily drip fight-or-flight responses into the appropriate sectors of my brain. After a month of stagnating in space stations, waiting for a potential job interview, I now want to get out and about, poking EVE in the eye with a hot stick.

Stay tuned. Any Given EVE is an ongoing series. It's only going to get wilder and woollier from here.

[Previous episodes: Get a Job, What Am I Even Doing Here]