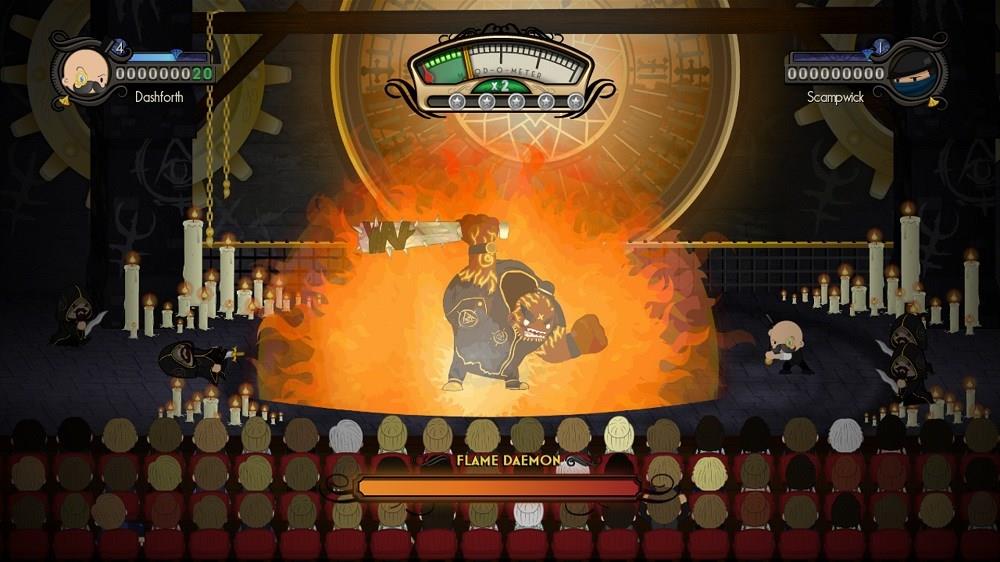 Written by Cyril Lachel on 9/17/2013 for PC
More On: Foul Play
In a few months, I am going to put Foul Play on my list of favorite games of the year and nobody will know what I'm talking about. And for good reason, because it's being released the day after Grand Theft Auto V. Not only that, but it's at least the fifth 2-D brawler of the year and coming out a week after the similarly themed Puppeteer. With all this stacked against it, chances are you'll forget about Mediatonic's newest beat-em-up before you're done reading this review.

But don't forget about Foul Play. I don't care if you have to tattoo the name to your hand -- do not forget about this game. Foul Play is one of the most charming action games of the year and will delight even those who normally hate 2-D brawlers.

As it turns out, our hero, Baron Dashforth, might actually be the most interesting man in the world.  And unable to keep the harrowing stories to himself, he's decided to reenact his many adventures to a sold-out audience. He and his trusty chimney sweep buddy, Scampwick, fight vampires, mummies, robots and sea monsters through five very exciting stage plays.

Set at the turn of the 20th century, Foul Play sees Dashforth continuing his father's research into demons and the occult. When mummies invade the harsh deserts of Cairo, our heroes spring into action and come face-to-face with the walking dead. But these two adventurers quickly discover that things are not what they appear and Dashforth's father may still be alive in an alternate dimension.

This sets the two demon hunters on a quest to battle supernatural monsters and complete the elder Dashforth's research. Along the way they get mixed up with a bunch of pirates, the vampires in Victorian London and even go underwater for battle the robot scourge in Atlantis. Each level comes with its own unique set of enemies and a mutli-part boss fight. And with each level down, Baron Dashforth and Scampwick come closer to revealing the horrible truth.

All this takes place on stage and in front of a live audience. You'll see sets constructed in the background, stagehands placing objects, actors calling for lines, enemies dangling from strings and even a few extras who aren't fully dressed. And because these are reenactments, the enemies are played by real people. Sometimes the costumes are convincing, while other times they are comically bad. 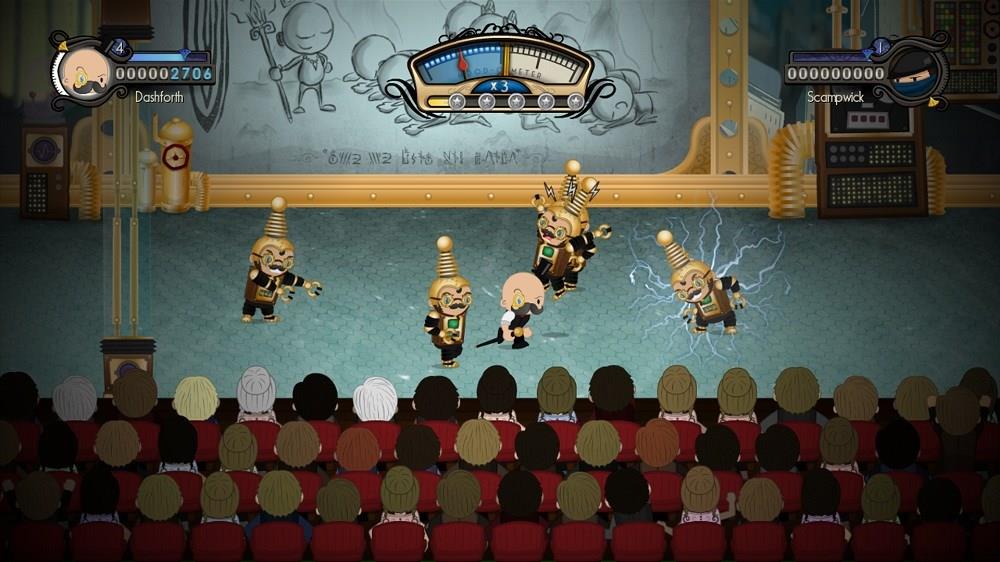 The live audience also plays into our hero's well-being. Instead of using a normal life bar like so many other 2-D beat-em-ups, Foul Play decided to go to Rock Band and Guitar Hero for inspiration. As Dashforth clobbers demons and mummies, the audience will hoot and holler to show their enjoyment. However, get hit too many times and the audience will lose interest and kick you out of the theater. They are quite the temperamental bunch.

Speaking of Rock Band, players will earn up to five stars in each stage. There's also a brief showstopper mode, which adds a multiplier to your score. And while hitting demons may not be the same as strumming a fake plastic guitar, Foul Play's easy controls allow for triple-digit combos that are every bit as much fun. While I wouldn't go as far as calling this River City Rock Band, Foul Play's genre mixing creates a compelling experience.

As interesting as the mechanics are, the real star here is the humor. Instead of skewering the genre or other games, Foul Play keeps us grounded with topical Vaudevillian humor and jokes about staging a play. The dialog is quick and often very witty; I found myself laughing throughout the five plays. What's more, I was genuinely surprised with the late game twist, leaving me completely satisfied with the writing. 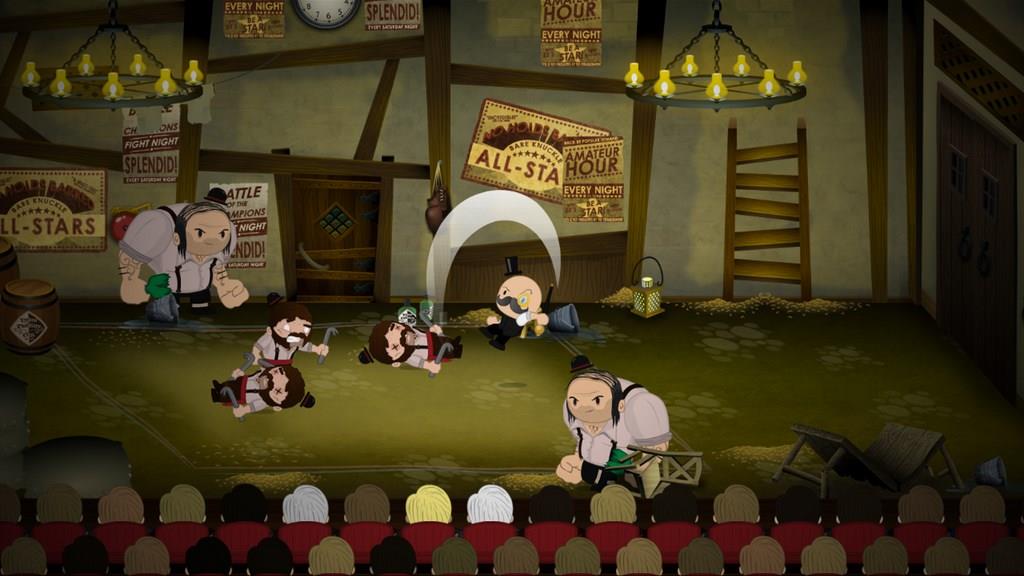 It doesn't hurt that the game looks almost exactly like a South Park episode. Sure, the humor is much less vulgar and nobody looks like Mr. Hanky, the Christmas Poo, but it's hard to look at the live audience and not be immediately reminded of the long-running Comedy Central series. Similarities aside, I was constantly impressed with the attention to detail found in every part of this game.

While five plays may not sound like much, rest assured that the game will take several hours to complete. Each play is separated into selectable levels, each with their own set of goals. In total there are 22 stages, including five impressive boss battles and a bunch of short encore mini-games. In total, Foul Play is much longer than old school beat-em-ups, through significantly shorter than Dragon's Crown.

If the humor isn't enough to make you come back for more, then the level-specific goals will. With the exception of boss battles, each stage has a set of three goals to complete. They aren't mandatory, but valuable items are given out to those who finish all three. Most of the goals are fairly simple, requiring little more than throwing enemies into breakable objects, piledriving mummies and completing perfect sections. However, there are a few that could have used a little more clarification. It was never clear how a cannonball combo was different from throwing a human cannonball. 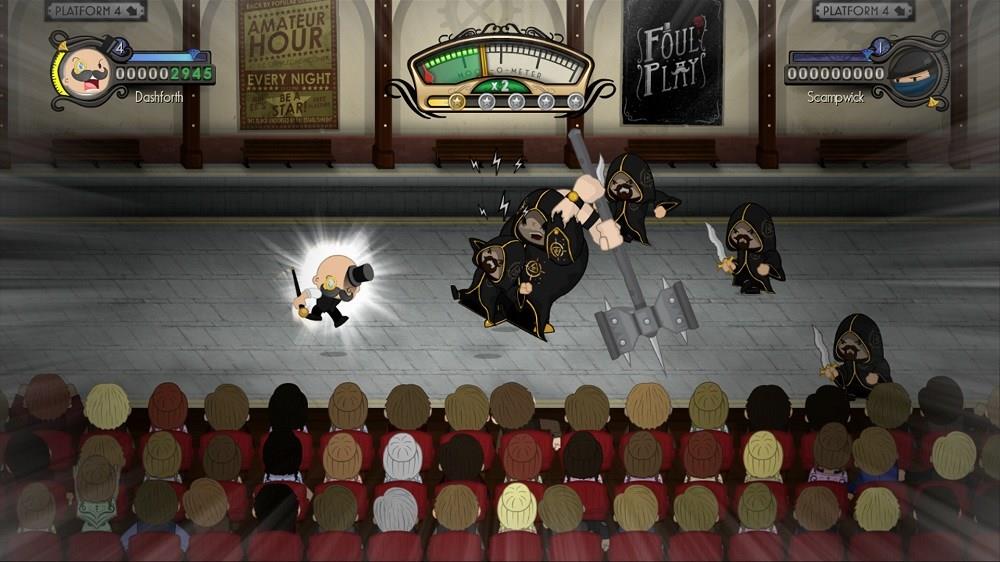 Not only will completing the goals unlock new perks, but you'll also earn experience points and level up Baron Dashforth and Scampwick. This opens up a new world full of special moves, including one move that lets your thrown enemy bounce around like a pinball. By the end of the game I felt fully equipped to take on the demonic horde.

Even with the leveling system and stage-specific goals, Foul Play remains a tried and true 2-D brawler, complete with button-mashing gameplay. This doesn't aspire to evolve the genre like Dragon's Crown, but also doesn't simply recycle what we've seen before in every other beat-em-up. What you get is an incredibly exciting story told in a very charming way. It's not especially difficult (I died only once, and it was in the final boss fight), making it perfect for just about anybody.

Yes, I know you're likely excited for Grand Theft Auto V and maybe even a little fatigued by the 2-D brawler sub-genre, but that's not a good enough reason to pass on Foul Play. With a great story and imaginative levels, you'll be charmed and delighted by one of the year's best games. Foul Play is not to be missed.
With its great sense of humor, exciting narrative, cool art style and fun stage play antics, you would think that Foul Play would be at the top of everybody's must-buy list. Unfortunately it's bound to get lost in the mix, thanks in large part to a release date that has it going head-to-head with the most expensive video game ever made. No matter what kind of gamer you are, Foul Play is not to be missed.