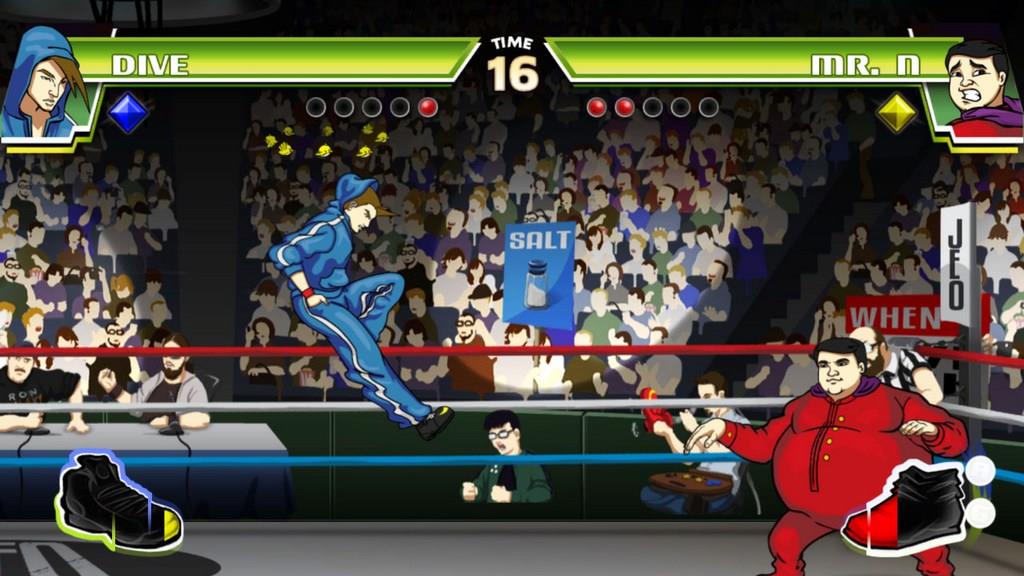 Written by Cyril Lachel on 9/3/2013 for Vita
More On: Divekick
Between Street Fighter's six-button configuration, the dozens of Tekken characters, and hardcore Virtua Fighter fanatics counting frames of animation, it's safe to say that fighting games can be intimidating to outsiders. But what if there was a fighting game that didn't bother itself with complicated combos and memorizing special moves?  What would it be like if a traditional 2-D fighter was accessible to everybody?

DiveKick is that game. Instead of releasing yet another overly complicated one-on-one fighter, Adam Heart decided to go the opposite direction. As a result, DiveKick boils everything you love about the genre down to two buttons -- dive and kick. And while that may sound too simplistic to be fun for very long, it turns out that this brand-new PSN game offers a shocking amount of depth and replay.

Now, when I say that DiveKick is controlled with two buttons, I actually mean two buttons. You don't use the D-pad or analog sticks to move, you only have control of two buttons. You can map these two buttons to any part of the controller, but you will never use more than the dive and kick buttons. You select characters and modes by pushing the two buttons together, and changing your mind is as simple as holding the dive button. (You can pause the game by pressing "start," so there are technically three buttons used.)

Even though there is a life bar, each match is won with a one-hit knock out. This leads to a series of incredibly tense rounds, as one mistake can be the difference between winning and losing. The idea is to dive into the air and, when your opponent is vulnerable, kick them to win. Sound simple? Well, it mostly is. It gets tricky as each player attempts to read the other person's mind; predicting when they'll make their move and waiting for a chance to pounce.

But that's just the tip of the iceberg. Each one of the 13 characters not only has a unique dive kick, but they also sport their own moves and abilities. That is to say, as simple as the core mechanics are, each one of the DiveKick characters plays noticeably different from the rest. These aren't simply 13 palette swaps; they are fully realized fighting game characters. They even have their own stories to see through.

Dive and Kick are the game's Ryu and Ken. These two were born and raised in West Philadelphia. But after a schoolyard brawl, their mother sent them to live with their rich uncle in Bel Air. In case you haven't caught on yet, their stories have been plucked out of the Fresh Prince of Bel Air. And believe me, that's just the start of the referential humor. 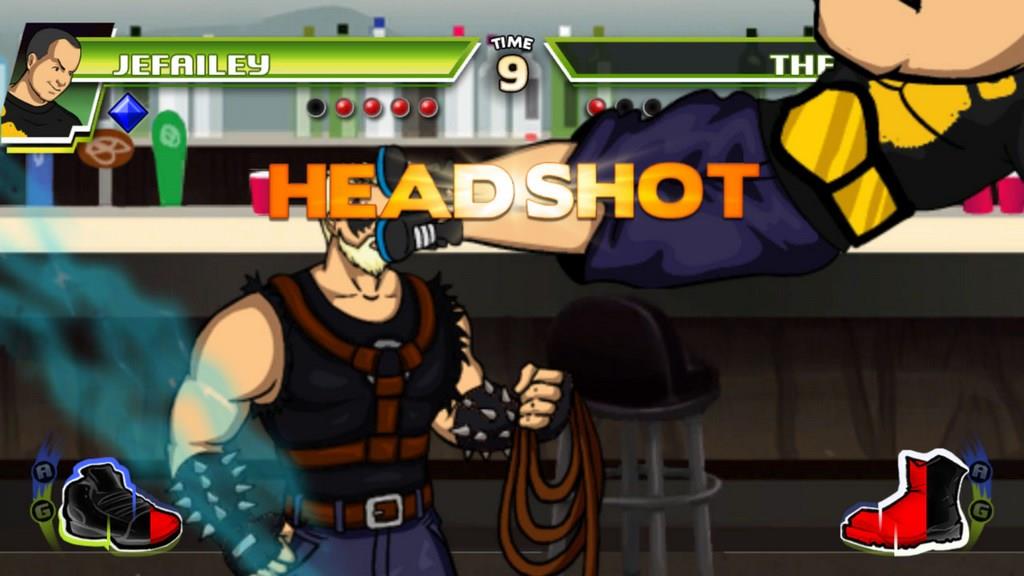 Kung Pao wears a sharp hat and has a kick very reminiscent of a certain Mortal Kombat character. Jefailey is based on a real player in the fighting game tournament scene, his head literally grows larger with each K.O. Markman works at Mad Catz and yells, "I make fun game accessories," when he's selected. Another characters pokes fun at the notoriously inconsistent quality on most live video streaming websites. And then there's S-Kill, who is based on Seth Killian, the former community manager at Capcom (and current game designer at Sony Santa Monica).

Thankfully these characters are more than one-note in-jokes about the hardcore fighting game scene. I quickly discovered how different the brawlers are. Take Uncle Sensei, a character who fights with boots on his feet ... and hands. This is a character who switches his fighting stance with each kick. Dr. Shoals is a thin woman with a Cyrax-inspired mask. She's able to change the angle of her kick in midair.

The Baz is an interesting character, as his speedy kick leaves a trail of deadly electricity. Other characters, such as Markman and Kung Pao, can open up portals in the level. There are also characters that can hover above the ground and even one combatant that changes fighting styles between rounds. And you better believe there's a novelty character, a la Blanka. Redacted is a pregnant skunk bear who drank toxic waste while fleeing Canada. She's fast and her downward kick is hard to beat. 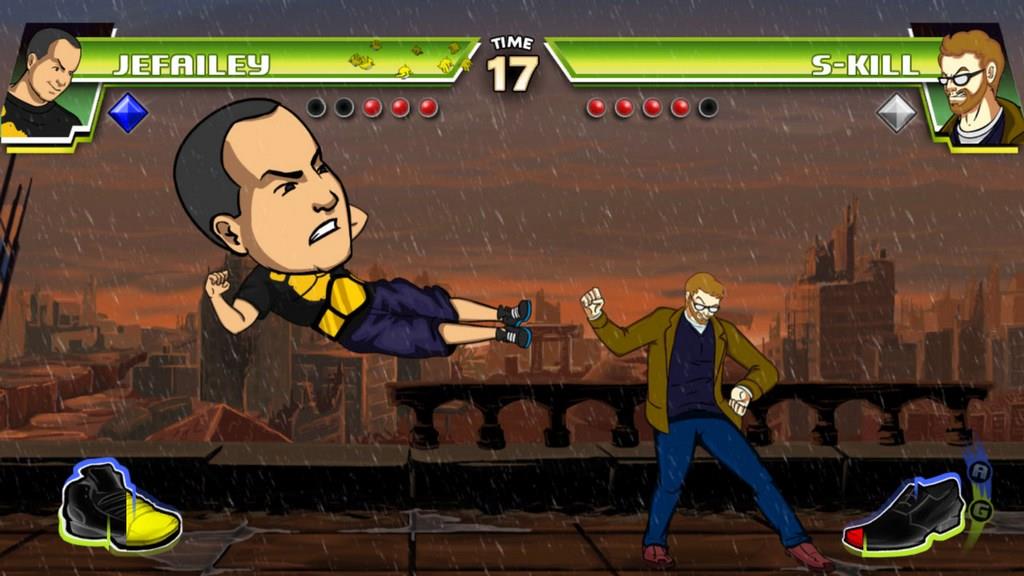 The character differences can be minor, such as the angle of the dive kick or the ability to bounce off the wall. However, a few characters are designed to be more involved. Markman is a good example, as his special ability involves multiple steps. You start digging up the frame for a very special Mad Catz DiveKick arcade-style controller, and then try to locate the two colored buttons. Once you've collected all the parts, this character will sport a brand new move -- an upward kick that resembles an uppercut.

And if that wasn't enough, you'll also need to pay attention to the power meter. This is a fighting game staple, allowing the player to gain an advantage for a short period of time. But watch out, because a kick to the head (what the game refers to as a "headshot") will both drain the meter and leave the character dizzy. Needless to say, there's a lot more going on than initially meets the eye.

Even with so many mechanics going on at once, the game remains incredibly easy to pick up and have fun. It's not intimidating to new players, who may actually have a shot at beating a skilled fighter. So much of the game comes down to waiting for an opening and then seizing the moment, something just about anybody can do. And since the rounds are so short (a maximum of 20 seconds by default); the pace is quick enough to get multiple players in a relatively short amount of time. It's a great party game. 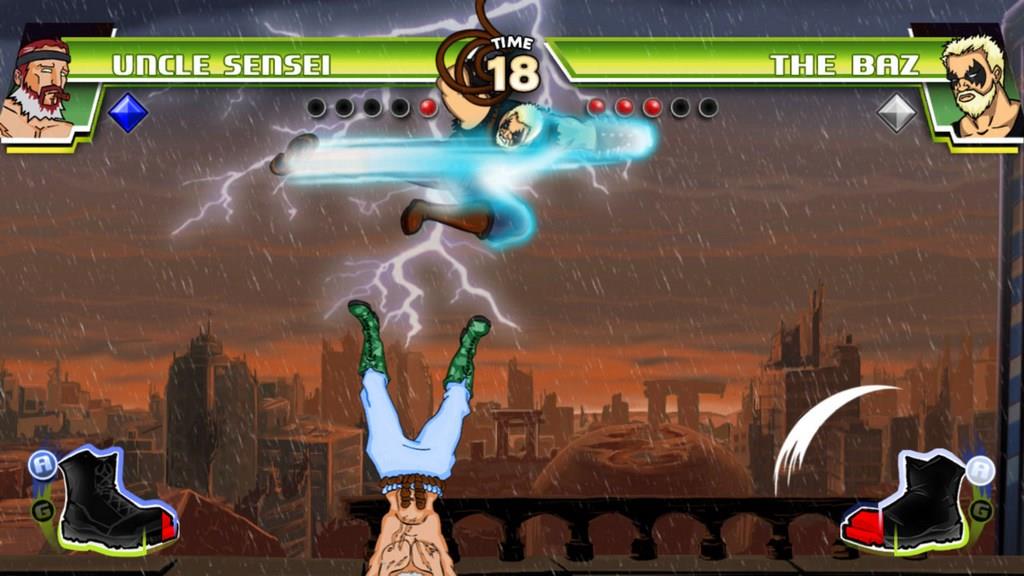 Like so many fighting games that came before it, DiveKick's novelty wears thin when playing solo. In the story mode, each character comes with an introduction and ending cinemas in the style of a motion comic. While not very long, these cutscenes are silly enough to see through to the end. Unfortunately there's no theater option to replay the endings you've unlocked.

While I'm on the subject of weird oversights, I found the two-button gimmick a little frustrating at times. Not that the gameplay suffers because of it, but there are some weird inconsistencies I can't wrap my mind around. For example, most times you can return to the previous menu by holding the dive button. But not every time. There's no way to back out of the main story and versus modes. You have to select a fighter and their color scheme before you can pause the game and exit out that way. With so many unused buttons, I don't understand why they couldn't map a back button.

I also found it weird that the PS Vita version could play online matches, but not local ad hoc multiplayer. That's not to say you can't go one-on-one with a friend in the same room, DiveKick has come up with an interesting workaround to this multiplayer conundrum. As it turns out, two players can play on the same PS Vita. Players sit side by side, with one person using the D-pad and the other player pushing the face buttons. It's an interesting idea, but I still would have preferred a dedicated ad hoc multiplayer mode. 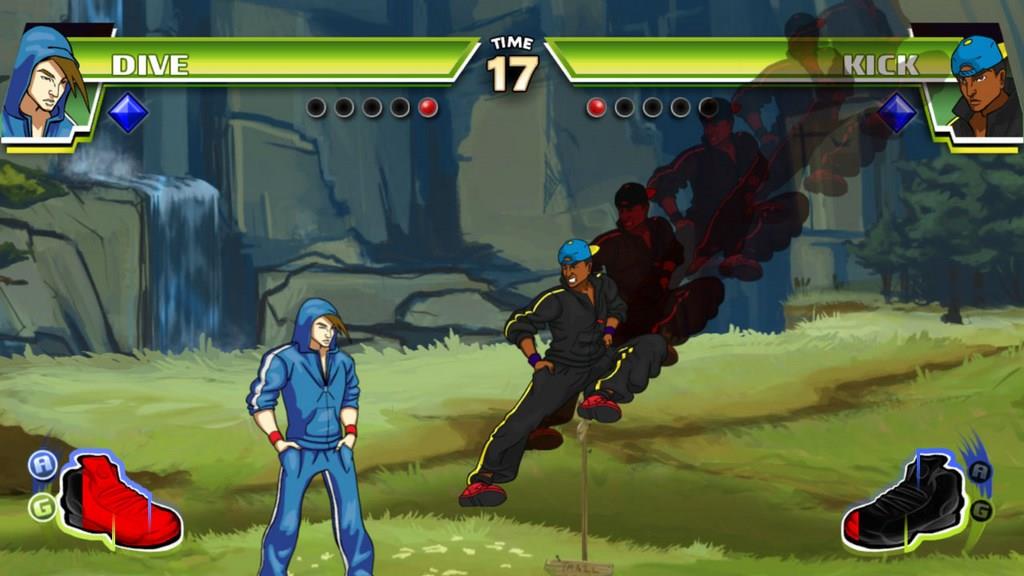 The good news is that both the PlayStation 3 and PS Vita versions of DiveKick offer online play. Sadly, like the rest of the game, the online multiplayer modes are on the barebones side. There are both ranked and unranked matches, as well as private rooms where you can play against friends. While there isn't much to this mode, it does feature smooth, lag-free online matches.

Even though I'm a longtime fan of the fighting game genre, I feel like I only caught half of the jokes. Thankfully, you don't need to have a deep knowledge of the Evo scene to have a good time with DiveKick. A lot of the game's jokes are funny enough on their own, even if you don't know what it's making fun of. The cartoonish art style goes a long way to sell the game's over-the-top sense of humor and I had a good time with the goofy cast of characters.

DiveKick successfully finds the balance of casual and hardcore. It's accessible enough for anybody to play, but has enough depth to keep the skilled players coming back. It's also incredibly funny, poking holes in the genre's biggest cliches and tropes. But beyond the jokes and weird Fresh Prince references, DiveKick finally allows me to play fighting games with friends who are normally scared off by the genre. That alone makes DiveKick a worthwhile investment.
With only two buttons and 20-second rounds, DiveKick may sound too simple to be any fun. But that's where you're wrong. This is a game that will not only bring new fans to the genre, but also keep the hardcore fighting fans coming back for more. Throw in a memorable cast of characters and you have one of this year's best fighting games.