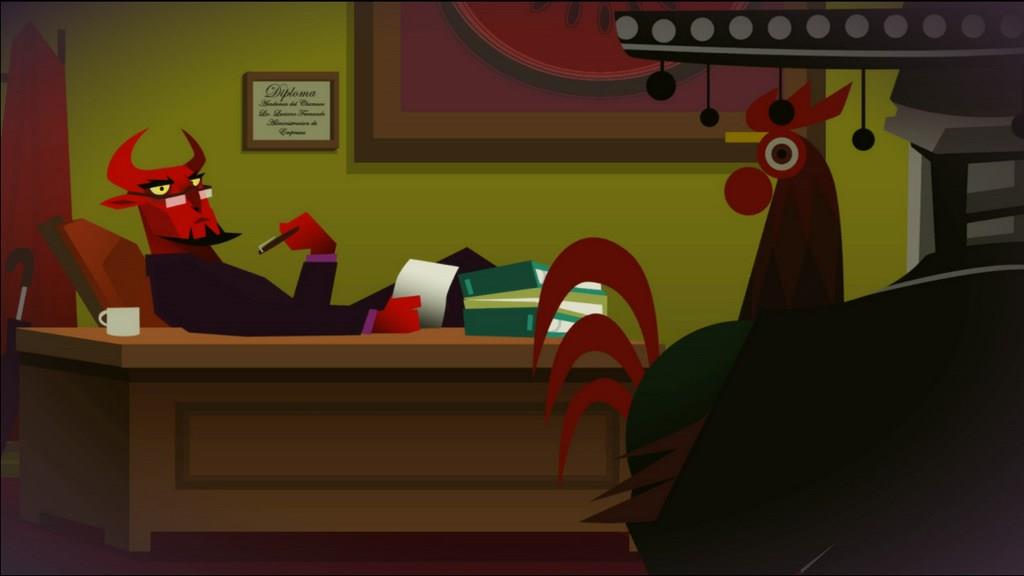 Written by Jeff Kintner on 9/5/2013 for PC
More On: Guacamelee!
Drinkbox Studio's platforming beat-em-up has finally arrived on PC, so get out your Spanish to English dictionaries kids, it's time for some Guacamelee!! Previously a PlayStation Network and PlayStation Vita exclusive, Guacamelee! has made its Steam debut with its Gold Edition. Guacamelee! is a ton of fun, looks good, and has a great sense of humor. But I have to give it the "hardest game to recommend to your friends" award, because you sound insane when you tell them to buy the mini-Metroid where you play a semi-undead luchador, and that half the fun is all of the Spanglish puns and nerd references strewn about the game. Then again, maybe I just need better friends because that still sounds pretty awesome to me.

In Guacamelee! you take control of an agave farmer-turned-luchador that's on a quest to save El Presidente's daughter from the evil Carlos Carlacas. Juan finds a magic luchador mask, and with the optional aid of Tostada the guardian of said mask, he must hunt down Carlos and his lackeys to save the world and the love of his life. As I've already said, Guacamelee! plays a lot like Metroid -- there's a ton of collectables to find and throughout the game you'll unlock special attacks that improve your combat and platforming abilities so you can explore more of the world. 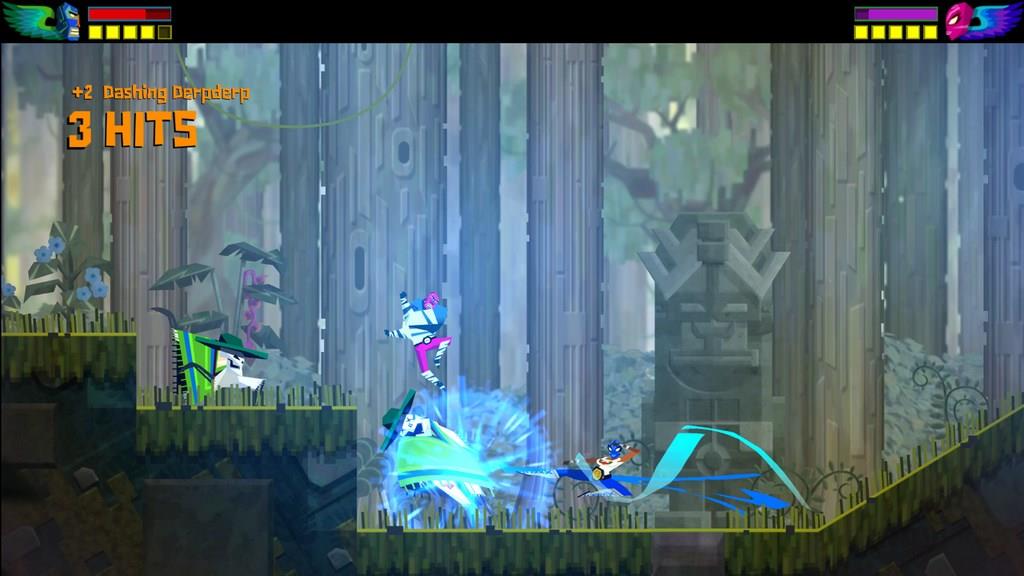 What sets Guacamelee! apart from its space hunter counterpart is it's side-scrolling beat-em-up sensibilities. The combat is simple and fluid, it actually handles a bit like Super Smash Bros. where each direction has a simple attack and a special attack, but Guacamelee! has a larger focus on grappling and throwing your opponents. Which makes sense considering, y'know, the main character is a Mexican wrestler. Juan can simply pummel his foes until they explode into piles of debris and money, but it's much more satisfying to soften them up with a few uppercuts and then piledrive them into a group of their buddies. You're encouraged to pop your enemies into the air and juggle them with as long a combo as possible; you can see your hit counter rack up in the top corner and little encouraging phrases like "Olé!" flash over it. Your defenses are equally simple: you can roll past most attacks but I preferred stunning my enemies by throwing them into each other, then diving back into the fray.

As fun as the combat is, the real heart of Guacamelee! is its platforming puzzles. Every new ability not only adds an extra attack to your repertoire, but adds another layer of difficulty to the puzzles. At first, you're ducking and uppercutting your way through narrow hallways, but before long, you'll be wall-jumping, dimension-swapping and flying over mountaintops. I think it's cool that there's a drop-in co-op option, but none of the puzzles are really tailored to co-op play. Because timing is so important, it's next to impossible to get through some of the areas as a team, which is why it's good that the game lets either player seamlessly drop out and jump back in -- I just wish that it wasn't necessary to do it so often. Personally, I would have also appreciated some LittleBigPlanet-style puzzles that required two players to solve. I found the co-op mode only shines during combat -- having a second player doesn't necessarily make the rest of the game worse, but it doesn't improve it either. Although I have to say, I laughed really hard at the Juanita/Tostado gender-swap costumes. 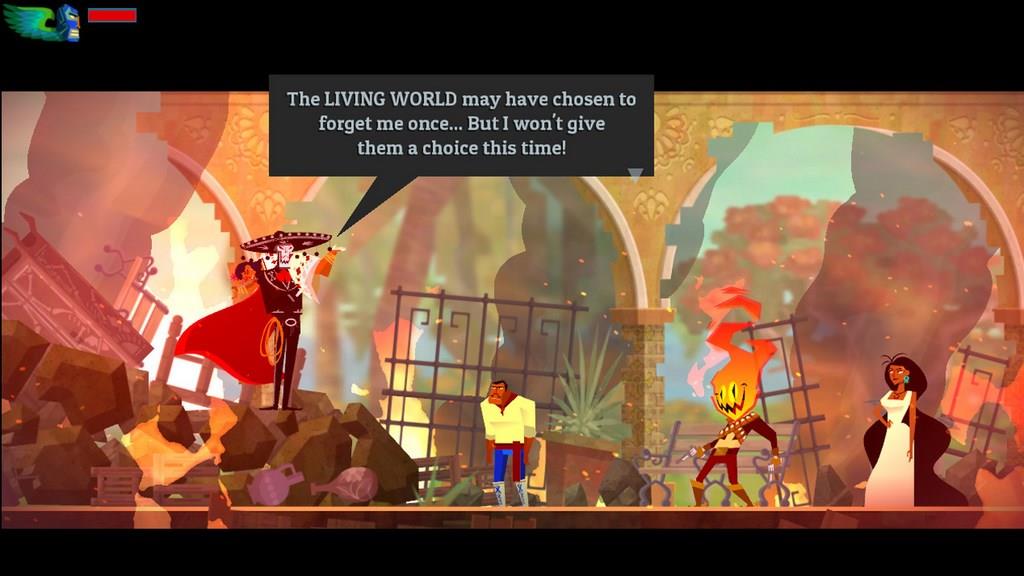 Guacamelee! has bright, cartoony graphics that suit the tone of the game well. The best part is that it never takes itself too seriously and wears its influences on its sleeve, from smashing "Choozo" Statues for new abilities, to posters featuring luchadores named El Niño de Carne and Mega Hombre. If you love gaming, internet culture, or have an unhealthy obsession with puns like I do, you'll appreciate all of the nods and jokes hidden throughout the game.

You're probably wondering what makes Guacamelee! Gold Edition so special. Well, for starters, it includes the El Infierno DLC that adds a challenge arena into the mix. There are 17 challenges, some of them want you to rack up as high of a combo as possible, while others require practiced and precise platforming, or speed running through a slew of death traps. If you get enough medals in El Infierno, you unlock three new costumes that add some variety to your playstyle. There's El Portero, which makes your punches weaker, but your throws better; Alebrije, where you dress up as a dragon and deal a ton of damage, but take more damage when you get hit; and El Diablo -- which shortens your health bar, but lets you drain health and kick butt in a suit. Gold Edition also lets you make custom skins and download user generated content through the Steam Workshop. The best part of this is, all you need to create your own skin is Adobe Flash 5.5, since that's what Drinkbox used to animate the game. There's already some great costumes in the workshop, like Grim Fandango and Mr. Destructo -- a couple people even made skins of themselves for a Let's Play. I'm not artistically inclined, but I'm going to take a crack at making El Toro Fuerte from Jackie Chan Adventures, so keep an eye out for that.

The only big drawback of Guacamelee! is how short it is. There are lots of collectibles to find, and the challenges in El Infierno are difficult enough to keep you swearing and working  for a few hours -- so if you're a completionist, you'll be getting a bit more mileage. That being said, there are only four major temples and bosses, and when the time came to face off against Carlos Calaca, I was hoping for a fake-out ending so I could get another dungeon out of it. But maybe I'm just being greedy. All that being said, Guacamelee! Gold Edition is definitely worth your $14.99. It's fun, it's got a good sense of humor, and I'm pretty sure it counts towards your foreign language requirement for school.
Despite its relatively short length, Guacamelee! Gold Edition is definitely worth your money. You'll enjoy every second of its cartoony style and sense of humor.