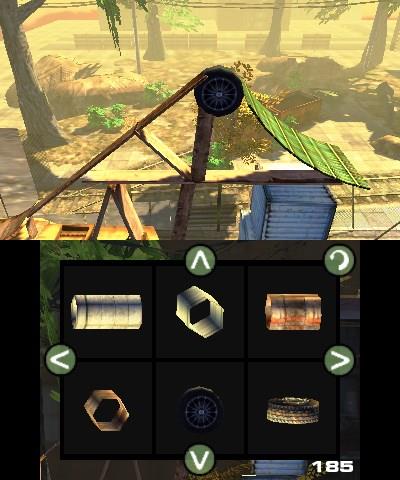 Written by Russell Archey on 9/4/2013 for 3DS
More On: Urban Trial Freestyle
If you’re into motocross games, then I’m sure you’ve at least tried one of the games in the Trials series.  If you don’t know what I’m talking about, it’s basically motocross racing on a physics-based motorcycle. Not only can you control the speed of the bike, but you can also control the pitch by leaning forwards and backwards whether on the ground or in the air. Trials Evolution was released for the Xbox 360 last April, and for Windows PCs this past March, with a demo popping up on Steam a couple months later. Keep this in mind, as I’ll be coming back to it in a bit.  Urban Trial Freestyle is a game that looks to cash in on the success of the Trials series.

Much like in the Trials series, Urban Trial Freestyle has you controlling a physics-based motorbike as you race through multiple tracks, but it’s a tad different here. You can try to get a fast time to earn more stars which allows you to unlock more tracks and bikes, but there’s also a stunt mode. Now when you hear stunt mode, what’s the first thing that comes to mind? For me, it was trying to pull off the kinds of stunts you see in the X-Games. Here, not quite. Your death-defying stunts in this game are how high you can jump, how long you can jump, and how accurately you can land a jump. You have this physics-based bike that you can easily do 360s in, and you don’t get a chance to do any tricks with it. What’s worse is something I’ll get into next: the tracks themselves. 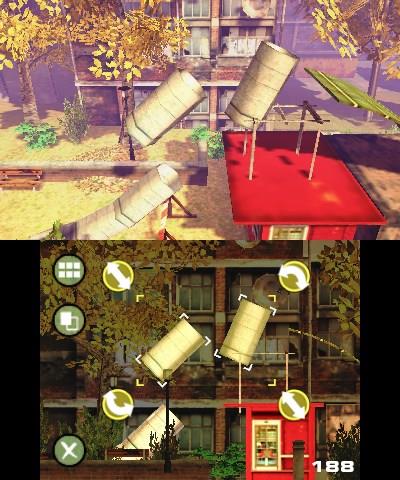 This is where talking about Trials Evolution comes into play. Since the two games are very similar I decided to download the Trials Evolution demo off of Steam to compare the two. Now to get back on track (pun only slightly intended): the tracks themselves. I played several tracks in Trials Evolution’s demo and they all seemed straightforward. You try to get to the end as fast as you can while navigating any ramps, bumps, and so on. While there is a bit of a learning curve with bike controls and learning the tracks, it’s not too hard to get the hang of. With Urban Trial Freestyle, there were several moments where something just came out of nowhere and wrecked my run that made me think of--and I can’t believe I’m even comparing a motocross game to this--I Wanna Be the Guy. No, seriously. In one of the early tracks, just after a checkpoint, there’s a small ramp just before a big hill. No big deal. However, a little ways after that small ramp, a car will roll down the hill towards you, and you can’t go backwards past the ramp. You have to restart at the checkpoint, and if you can’t hit the X button fast enough, it’ll count as a fault and dock you points. There’s even a track that, just after the checkpoint, drops a crate from the sky that’s supposed to hit the back end of a board that will launch you into the air. But if you don’t know that and don’t go fast enough, the crate will crush you, sending you back to the checkpoint.

The way you earn stars in Urban Trial Freestyle is based on your score after completing a track. The score is based off of either your time or how you did on the “stunts” (depending on which mode you’re in) minus 100 points for each fault.  Every 2,000 points nets you a star, so you have to get at least 10,000 points to get five stars, and for time trials that means hardly crashing at all. If you crash even once, you better go full speed to the end to even have a chance at getting all five stars. Just what do the stars do though? A three-star average on any sector (each sector has four tracks), in either Time Trials or Stunt Mode, unlocks the next area; a four-star average unlocks a new bike; and a full five stars unlocks a challenges option.  Needless to say I have no idea what the Challenge Mode is as I’m nowhere near getting five stars on any sector except the first. To unlock everything else, like attire for your biker or parts for your default bike, you collect money found in each stage. Sometimes the money is right out in the open, other times you have to search for it. However, I've found that the parts you unlock for your default bike are not as good as the bikes you unlock by getting four-star rankings anyway, so it’s not really worth it. 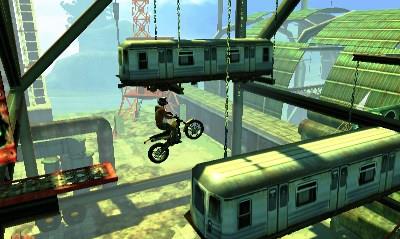 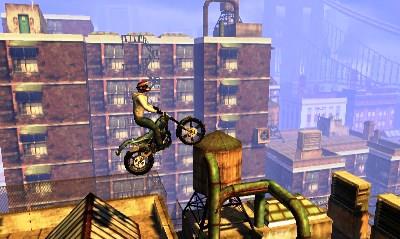 Finally, there’s the track editor. The track editor isn’t actually that bad, as you have a wide range of options to choose from in what to place and where. I do have a couple major complaints though. First off, you have to choose from one of eight scenarios. These scenarios are basically eight of the game’s pre-made tracks that you’ll go through in the main game, but they don’t have any obstacles to start out with. All of the flat terrain and drops are there, you just have to create ways to get from start to finish. The build options are nice, but it would be great if you had more of a choice of terrain. Comparing to Trials Evolution again, you have a nice robust editor and a massive area in which to build a track. You can set your own start and end points, make the track as long or short as you wish, and any bumps, hills, and drops are part of the terrain, not just there because the designers decided to put a random hole somewhere. However, for a portable game, the track editor for Urban Trial Freestyle isn’t all that bad.

However, there is one other thing that bugs me. Outside of the leaderboards, this game has absolutely no online functionality, and that’s a major letdown. I like how the leaderboards are done, so to speak. For each track, you have two timers counting down: your best time and the “world record”. As you improve your scores, the leaderboard will update, and you might just find yourself racing against your own world record score.  However, there is no multiplayer, and, what really gets me, there's no way to upload or download new tracks. So, you have a track editor that can save up to 30 custom tracks, but no one else can play them. I’m sorry, but even though some people might criticize me for comparing a full-fledged Xbox 360 game to a 3DS downloadable title, there is no reason not to be able to at least share tracks online. If there’s a way to do it, I’m not seeing it.

That’s really all there is to say about Urban Trial Freestyle. As stated, some people might criticize my review a bit because I’m comparing a seven-dollar 3DS downloadable title to a 20-dollar Xbox 360 and PC game, but when you’re making a game that’s basically just like another game, you have a lot to live up to. Urban Trial Freestyle is basically a portable Trials game done by a different developer, though not quite as fun.  Don’t get me wrong, UTF isn’t a bad game by any means, but if you had to make a choice between UTF and Trials Evolution, I’d say spend the extra 13 dollars. However, if you’re just looking for a similar game to play on the go, Urban Trial Freestyle is still a decent game. As much as the tracks can frustrate me with its “hey, let’s add a random pit here that the player won’t see on his first time through” style of track design, and the lack of multiplayer is kind of inexcusable to me, I still find myself coming back to improve my rankings to see if I can unlock the challenge mode. I will say that, for what we got, seven dollars might be a bit of a stretch on cost, but it could have been worse.
If you’re looking for a portable Trials game, Urban Trial Freestyle isn’t a bad alternative. However, the track designs could have been a little better, and I’m appalled at the lack of multiplayer. A motocross game is a perfect example of a game to play with friends, but apparently the developers didn’t think so.