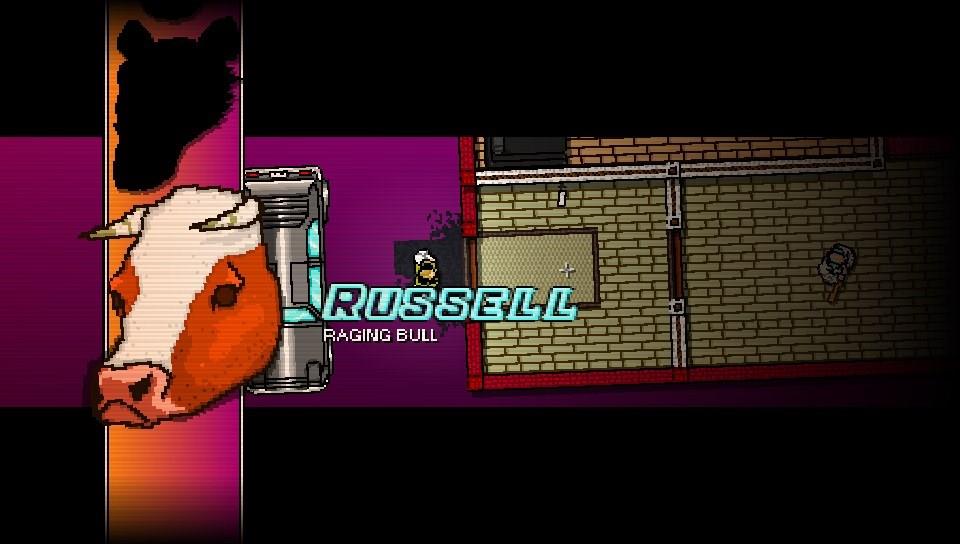 Written by Cyril Lachel on 7/2/2013 for PS3
More On: Hotline Miami
Life is fleeting. Don't take it for granted, because you never know when it will end. At least, that's my takeaway from Hotline Miami. With a quick and painfully brutal death around every corner, it's important to savor the little time you have on this planet.

After shocking PC owners with its graphic violence and addictive gameplay, Hotline Miami has finally landed on a home console. Set in the late 1980s, you take control of a functioning serial killer plagued by mysterious phone calls. Each night he puts on an animal-themed mask and kills everybody he sees. And when he's done, he rents a movie and settles in for a night of rest and relaxation.

With a set-up this gruesome, Hotline Miami could have gone a number of ways. The description sounds more like a sequel to Rockstar's Manhunt than an overhead action/puzzle game. But don't let the blood splatter fool you, Hotline Miami will test both your mind and reflexes. It's a game about planning the right kill, knowing how your enemy will act and properly handling your weapon. There's equal parts brain-teasing stealth and knives-out, heart-pounding action.

The goal is simple enough: Clear the room by any means necessary. Sometimes it's an office building and other times it's a drug treatment center. You'll sneak through a hospital, take down an entire police station and mess up the local night club. Each of these stages is presented from an overhead point of view, almost as if you're looking at the building's blueprints. No matter how big or small the level, you'll have to deal with enemies hiding in rooms, dogs roaming around and windows that will give away your location.

Death comes quick in Hotline Miami. All it takes is one wrong step and you'll be hit with a stray bullet or stabbed to death. It's impossible to keep track of every enemy, and they have a funny way of rushing our "hero" from all sides. With so much to keep track of, the fear of death is always front and center in my mind. And that's okay, because you'll die dozens of times before finding the right solution.

In that sense, Hotline Miami reminds me a lot of Super Meat Boy. While it's not a 2-D side-scrolling platformer, Hotline Miami does employ a lot of the same trial and error mechanics that made Super Meat Boy tick. There's no loading when you die, you simply push the "X" button and you're ready to try again. The music doesn't even skip a beat, it keeps playing as if to gently remind you that it's okay to die multiple times testing new strategies. 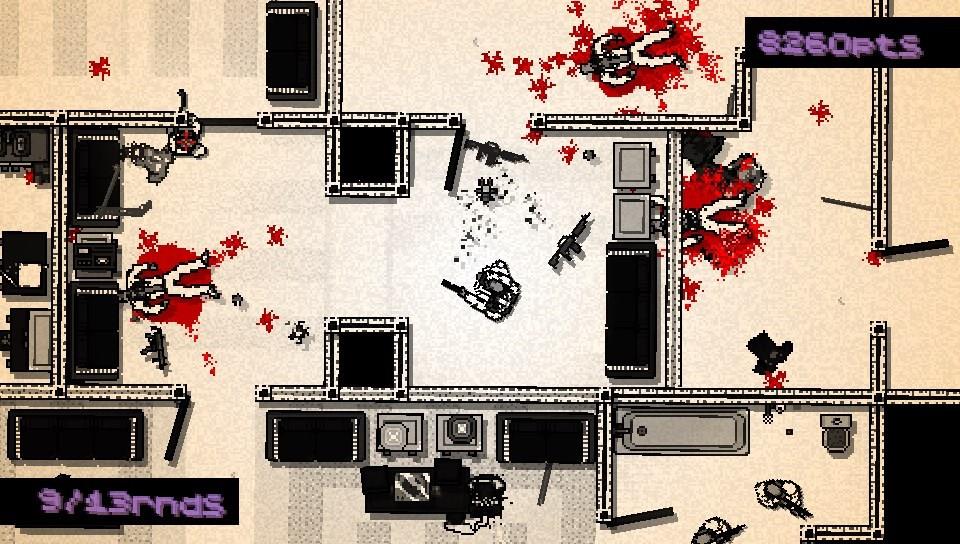 There are subtle changes made to the level after each death, including alterations in enemy movement and weapon placement. Each continue feels a little different, forcing players to constantly stay on their toes. Memorization will only get you so far in Hotline Miami, expecting the unexpected is part of what makes this game so much fun. Even at its most frustrating, I always felt like the solution was just within my grasp.

The gameplay is a variation on the tried and true dual stick shooter, giving players movement and aim on the two different analog sticks. Unlike Smash TV or Geometry Wars, aiming is not synonymous with shooting. In order to fire a gun or use one of the many melee weapons, you'll need to hit the right shoulder button. The protagonist can only hold one weapon at a time and throwing a spent shotgun at an enemy's head is a great way to knock them out. You'll quickly discover that each of the two dozen weapons is a little different, so finding your favorite is a must.

Before each level, we're given a choice between a number of animal masks. These masks not only play into the storyline, but they also give the player an advantage. Rasmus the owl, for example, is good at spotting secrets in the level. Tony the tiger has fists of fury, George the giraffe allows the player to see farther, Louie the chameleon is harder to spot and Earl the walrus is able to survive two bullet wounds. 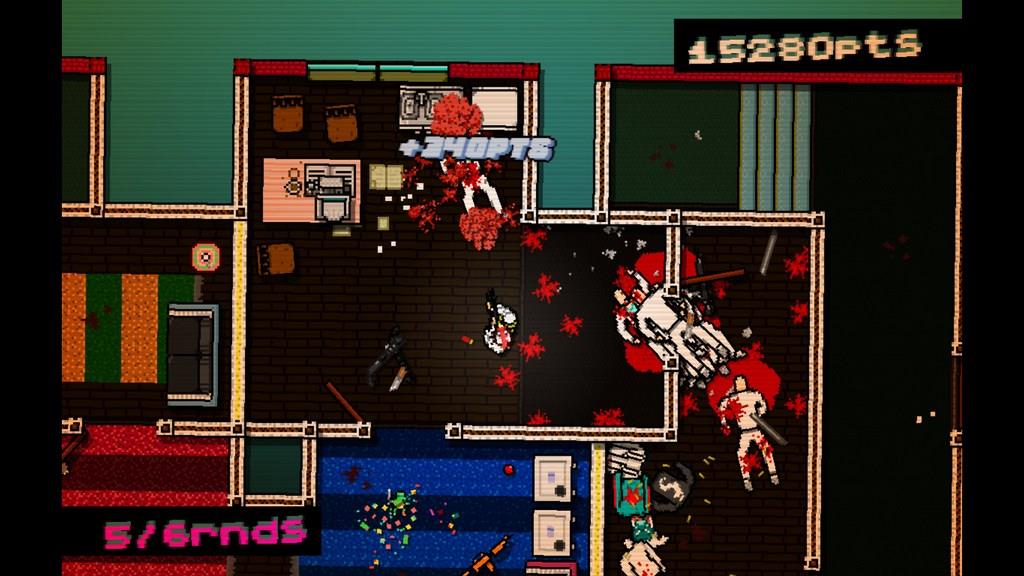 With so much happening around you at ridiculous speeds, the controls can be a little tricky for first-timers. Thankfully the action becomes more manageable with the lock-on button, which is especially useful when wielding one of the many firearms in Hotline Miami. PS Vita players will also be able to use the system's touchscreen to target enemies at a distance.

While it may sound trivial, the PS Vita's touchscreen makes a world of difference in Hotline Miami. At its most basic, it allows us to quickly move the map around and survey the rest of the building. Advanced players will discover that they can survey the area and target enemies, all while still having full movement over our nimble serial killer.

Doing this same thing on the PlayStation 3 controller is close to impossible without seriously injuring at least one of your fingers. The camera is controlled by the L2 button, which pops up a cursor. In theory you are to hold the L2 button, position the cursor with the left analog stick and then target the enemy with the R2 button. To add insult, the imprecise cursor bounces around and makes it difficult to target the right person. It ends up being more trouble than it's worth. 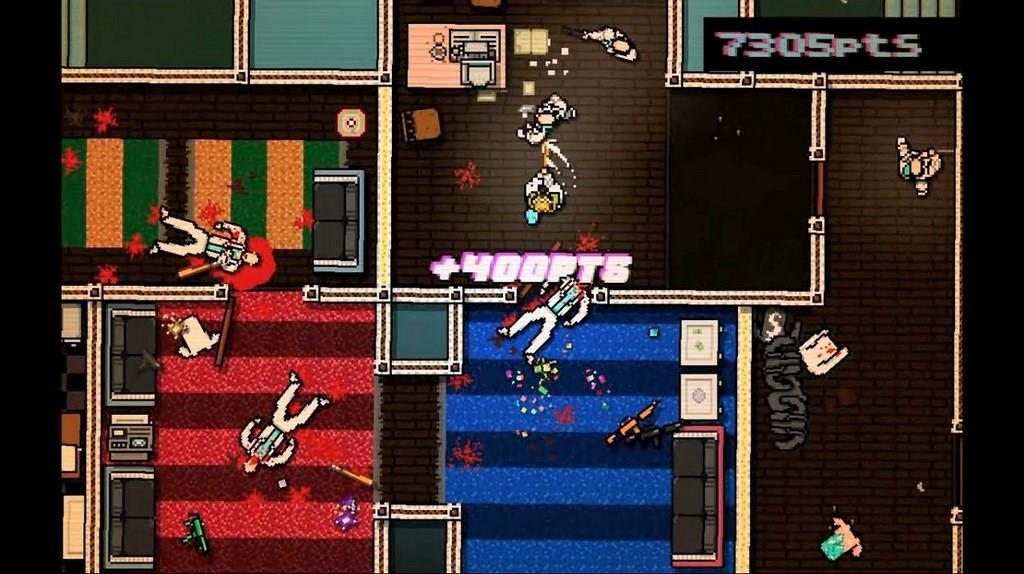 This is not some insignificant difference, being able to target enemies several rooms away is the cornerstone of my Hotline Miami strategy. I find myself using it constantly, even if I'm not specifically targeting any one Russian mobster. On the Vita, this couldn't be any easier. It feels completely natural and gives the player a sense of control they simply cannot get on the PS3.

I was also discouraged by the console's loose controls, especially when compared to the handheld Vita. I rarely had a problem managing the movement and aiming, yet there was something about the PS3's analog sticks that didn't feel as tight. This is not the first time I've noticed looser handling on the console half of a cross-buy; Knytt Underground had noticeably better handling on the portable version.

Because of these differences, the PS Vita is the preferred system for Hotline Miami. And while players get both versions for the same $10 asking price, it is the opinion of this critic that PlayStation 3 owners got an inferior product. Thankfully the game is perfectly playable on both systems, but there is no scenario in which I would opt for the console port.

Regardless of which version you play, Hotline Miami grinds to a halt the moment a boss shows up. The good news is there's only two bosses across almost 20 stages, but that isn't much comfort in the middle of a frustrating fight. Both fights require a healthy dose of memorization and luck, and your normal cheap tricks aren't going to work here. Even though the fights are brief, they make up two of the worst moments I had while playing this otherwise stellar action game. 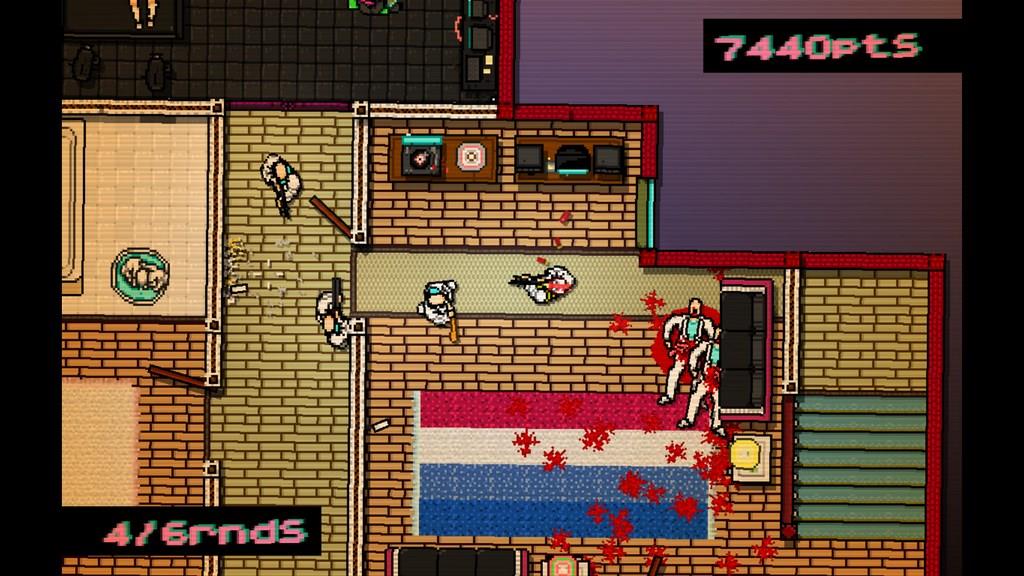 The game uses a sprite-based16-bit style to tell its story of wanton violence. There's a thick layer of noise in the background and the rooms sway back and forth as if the camera is slightly buzzed. While many people have compared Hotline Miami to the 2011 movie Drive, the approach feels much more reminiscent of the works of Argentinian director Gaspar Noe. Regardless of which theatrical feature you compare this action/puzzler to, Hotline Miami has a look and atmosphere that is completely foreign to video games.

Much of the heavy lifting is done by one of the most memorable soundtracks I've ever heard. By combining poorly-recorded synth themes, trippy anthems, melodic house/trance and an assortment of crunchy loops, the Hotline Miami soundtrack would fit neatly in any one of Michael Mann's films from the 1980s. You will swear you've heard these same songs while watching Roddy Piper beat up aliens. They instantly evoke a certain chapter of the 1980s. A nightmarish chapter you won't be able to get out of your head.

What I haven't talked a lot about is the story, which is purposely vague for much of Hotline Miami's 19 stages. We're sent off on incredibly violent missions with almost no explanation, and the only social interaction you have comes from the friendly face at the pizza parlor. But as the sleepless nights become increasingly difficult to handle, the story begins to unfold in some dark and twisted ways.

Although the game is challenging, most players won't have too much trouble beating the 19 stages. Once complete, two bonus (non-canonical) stages appear. Beyond that, players will want to go through and find every last puzzle piece and earn all of the hidden masks (including a few that are exclusive to PSN). The game also offers online leaderboards, as well as player ratings for every stage.

There's a reason why PC owners fell in love with Hotline Miami, and now console players are finally able to share in the fun. This PlayStation 3 port pales in comparison to the PS Vita version, but that won't stop anybody from having a good time with this year's most aggressive action game. At ten dollars, Hotline Miami is worth it just for the soundtrack.
On the PlayStation 3, Hotline Miami delivers an unforgettable adventure starring an obedient serial killer. Unfortunately, this home console port feels too loose and pulling off certain moves can be painful. It's occasionally infuriating, but that doesn't keep Hotline Miami from being one of the most exciting games to hit the PlayStation 3 in a long time!