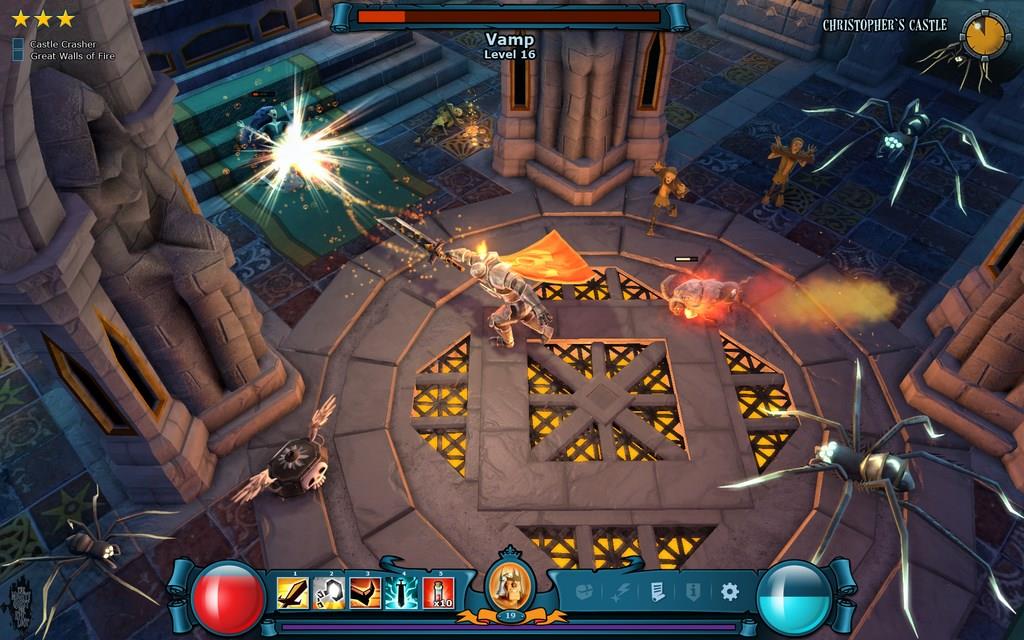 The Mighty Quest for Epic Loot

Written by Jeremy Duff on 7/26/2013 for PC
More On: The Mighty Quest for Epic Loot
Have you ever messed around with something like the Torchlight level editor in the hopes of crafting the perfect dungeon, something you probably gloated about being capable of doing while playing through your favorite dungeon crawler? I know that I have, and the result is always the same in my case: complete and utter failure. It is easy to picture these things in your head but bringing them to life can prove to be incredibly difficult. That is the entire premise of Ubisoft’s upcoming F2P adventure The Mighty Quest for Epic Loot (MQFEL), and then some.

There are two sides to the MQFEL experience: attacking and defending. Attacking is as simple as it sounds; you take on the role of one of the game’s three character classes (mage, knight, or archer) and plunder a variety of both computer- and user-created castles. Each class plays exactly as you would expect, specializing in magic, melee, and ranged attacks accordingly and they have their own, individual skill trees for you to develop along the way. you can even have multiple characters that span the various classes. The progress that you make with your stable of heroes, whether it is one or three, is shared across them. They may level independently in terms of their personal strength, but they share the treasure that they claim. As you progress, you will find stronger equipment and weapons and evolve in terms of personal strength and it is all stored in the same inventory. This starts off being extremely limited but it can be evolved with some in game purchases that expands your storage tabs.

Don’t be deceived by the brief glimpses of the game that trailers have offered up to this point; MQFEL is a much deeper experience than I ever expected.  That depth really comes out when you begin building and defending your own personal keep. your initial dungeon is about as bare bones as it comes, consisting of nothing more than the “castle heart” (the heart and soul that gives you access to all of features and abilities) and your gold and life force storage (which other users are looking to plunder). If you want to hold onto all of your gold and life force, you’re going to have to make some improvements to fend off those greedy players around the world.

Defenses come in all sorts of shapes and sizes such as monsters to lurk the hallways and around every corner to environmental traps that lay in waiting for the un-expecting adventurer. The more you put into it, the safer your personal loot collection will be. In addition to leveling the abilities of your character’s offensive abilities, you will have to do the same to every aspect of your castle. If you want more than the most basic monsters, then you have to invest in a research lab to increase and specialize their abilities. The same thing can be said for your traps, which won’t be anything but minor annoyances until you level them up to viable defenses.

You will want more than just defensive capabilities in your keep as well. You can add things such as a hero trainer which will assist you in leveling your character’s offensive abilities, embed mines to churn out an unending flow of gold and life force for you to spend, or even a potion brewery to give your character a little bit of help on his raids. Each one of these aspects has to be maintained and leveled independently, which gives you a lot to do and focus on. Like I said, this is a much deeper experience than it seems on the surface.

Everything in the game can be purchased or upgraded using currency that you earn throughout your adventure. Of course, like every free to play game out there, you have “premium”options as well. You can throw down a little bit of cash to buy yourself “blings” which are super-up currency. You don’t have to throw down money to get blings, they are simply meant to give you quicker access to some things you would normally have to work a while to get. Growing your character and your keep takes time and dedication, unless you are willing to fork over a little cash. Doing so doesn’t give you access to anything different, it just allows you to get these things in a faster manner.

The community that builds up around this game is going to be its heart and soul and Ubisoft knows this. They have made it very easy to reach out to your fellow players and friends to extend your gameplay experience either by heading out into their creations or through community contest and tournaments. It is all integrated pretty much seamlessly into the campaign experience that is also offered by the game. You can choose to view keeps on your map that vary in their origin with ease. A nifty battle log keeps you up to date with what is going on with your castle and your closest friends in the game in pretty much real time, keeping the experience moving along at a fast pace.

The game even rewards players for partaking in the community; rating a user-created castle or leaving feedback on someone’s else’s creation warrants you more loot, and any fan of this genre will tell you that you can never have enough loot. It creates an addicting cycle of “giving some” in order to “get some”, and it feeds itself endlessly along with an addictive gameplay experience. My brief experience with the game was based on the closed beta that Ubisoft is currently running so the community is a bit limited at this time. I can imagine that once this goes live and opens up to the world, this Mighty Quest is going to become even more addicting.

You can get yourself access by applying through the game’s official website for chance at a beta key or by purchasing one of the double-O founder packs offered on the site for guaranteed entry into the beta.