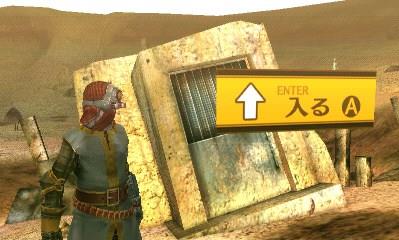 The choice to have SMT4 be on the 3DS is might be a curious one to those who haven't played it. But let me say outright that the decision is brilliant. It ties in superb touch controls with a stylish presentation that features one of the best characters in the game, and goes part and parcel with the storyline, which at times is a bit slow at piecing things together after a rather massive reveal early on. And I'm trying very hard to write this right now without giving away any of the big surprises, but know that it's a Shin Megami Tensei game, and there is some post-apocalyptic struggle between humans and demons, and it all starts with a ceremony to become a samurai in the kingdom of Mikado. 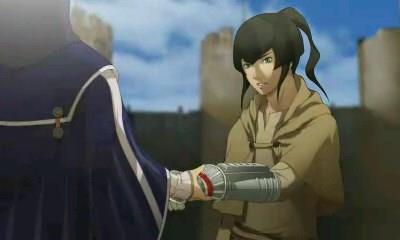 Coming from humble beginnings, your silent protagonist is a citizen of the Casualries, a 'lower class' of laborers and merchants who do the dirty work that the Luxurors of Mikado deign unworthy of their time. This societal divide is transcended by those who become samurai, who serve all the people of Mikado, regardless of their station in life, for the role of samurai is decided by a gauntlet. The strange thing is that this gauntlet is very out of place in the kingdom of Mikado, as it seems like a land that is more medieval than technological. These gauntlets house an AI known as Burroughs, who gives the samurai the power to summon and control demons in an effort to control the demon population and enforce the word of law and will of the people. Burroughs is a samurai's best friend, serving as teacher and gatekeeper to a great deal of information and if it wasn't for her presence I think players would most surely be lost.

Burroughs is also the keeper of quests, provider of maps, and scanner of surroundings. She is always there with information that nudges the player along, and considering how many side-quests there are it's great to have her along for the ride, especially since your other party members are just as clueless when it comes to understanding what's going on. You and your band of recently recruited samurai, Jonathan, the level-headed Luxuror who comes off as the voice of reason and good, Walter, the brash and action oriented individual, and Isabeau, the lone female and most neutral member of the group are in for quite the adventure. After a 'Black Samurai' begins to distribute 'literature' to the Causalries the samurai are tasked with tracking down this individual, to find out what they know and what their goals are. This leads players down in to a forbidden world beneath the depths of Mikado that isn't quite what I was expecting when I got there and is a sharp contrast to the bright and calm nature of Mikado. This other world is definitely one of struggle, as factions clash while you hunt for the Black Samurai, and your choices will determine the shape of your own struggles. 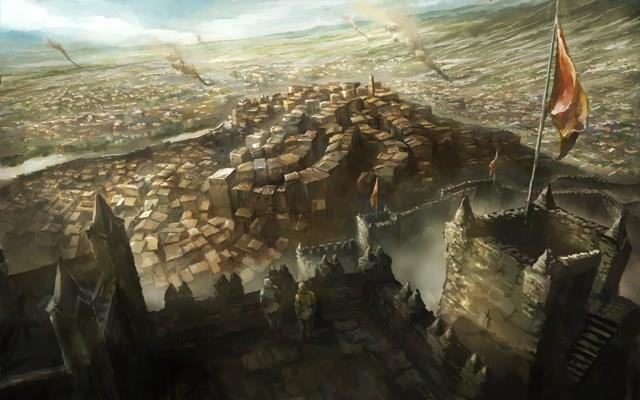 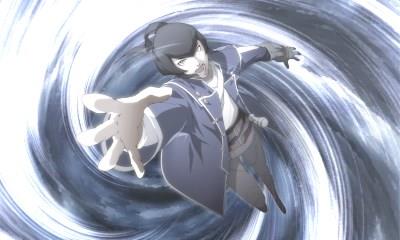 SMT4 introduces a new artist that Atlus has brought in to add to Kazuma Kaneko's vast gallery of demons, and newcomer Masayuki Doi has contributed to the creation of the main characters. The demons were handled by artists from Tokusatsu, who are responsible for the Kamen Rider franchise, and their work certainly shows. The presentation of SMT4 is also top notch. Voice-acted characters deliver their lines in a manner that seems akin to comic-books, rather than facing just one character at a time, it's very common to see multiple people in a scene, and characters will move in to place to speak their piece, and it moves quickly, keeping story exposition brisk but still engaging, because at the end of the day it's all about getting those crazy demons to fight on your side. The full-scale voice acting is solid and the music, while not as catchy as stuff in Persona, is still quite enjoyable. It's curious to see that Atlus continues to go with 2D sprites during battle, but 3D visuals when exploring, not to knock the artwork, because now the sprites look closer to their actual art, and the bosses look awesome (and fearsome at times), but there is definitely a disconnect between the 2D sprites and the 3D world. The 3D visuals of this game are actually some of the best that the 3DS has to offer, and for once I spent more time looking at a game in 3D than I did in 2D, which for me is huge, as I am not really a fan of 3D effects.

The crux of the battle system hinges on your making sure your party is fully stocked with demons, ready to be called at a moments notice in battle. Players are given what are called 'Press Turns' which players will recognize from SMT3, Digital Devil Saga, and other turn based RPGs in the franchise. Players consume Press Turns with their actions, but can earn more by exploiting enemy weaknesses or by scoring critical hits. But it's also possible to lose Press Turns by missing when attacking enemies or by hitting them with elements that they are strong against. Prove to be dominant in battle and sometimes demons will cower in fear, offering to join your party or give you items or cash. Usually it's a good idea to opt for the first choice, because it saves you the hassle of talking to demons. 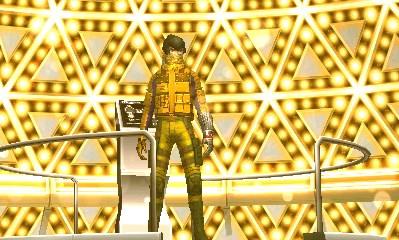 Talking to demons is the main way to recruit them to join your party. Sometimes they'll join after you give them enough items, or enough money. Others will join through tricky conversation branches, provided you can appeal to their personality. Talking with demons is a tricky subject, and some simply can't be talked to until you unlock an ability through Burroughs that allows you to understand demon tongue. Should a conversation go south, you'll learn the hard way that demons aren't meant to be trifled with, as you'll lose your Press Turns. This usually leads to a disadvantage in battle, and lead to a number of deaths in my case. During the early going, a blown conversation typically means you're going to die, so I highly recommend saving after practically every battle, because you'll be seeing Charon a lot, and he's kind of an asshole, though I guess if I were in charge of dealing with souls crossing the river Styx I'd kind of have a chip on my shoulder too. He'll send you back to your previous state before you fell, at a cost of Macca (the game's currency) or Play Coins (but I have fortune cookies in Animal Crossing to buy!). Macca is quite rare in the early going of the game, earned by grinding quests that can be repeated, so when a demon asks for it, it's tough to gauge the risk between them being cheated, and potentially dying, versus just paying up, and even then there is no guarantee the demon will join. Macca is better spent on weapons and gear, which serve to increase your stats, hit points, and magic points. The game eschews the common stat of defense, opting to instead offer protection (and weakness) to specific elements that enemies command. Where as in a game like Persona where your elemental strengths and weaknesses were attributed to the Persona you were using, SMT4 leaves that in the hands of equipment.

Outfitting your party with a good stock of demons means you'll constantly be recruiting and registering them in the game's compendium, and then fusing them together to create more powerful demons. The incredibly deep roster offers players over four hundred demons to acquire, though you probably won't be getting them all in your first playthrough. You'll constantly be balancing your party's strengths and weaknesses as well, and unfortunately there are going to be times where you'll run up against a boss, or a tricky demon after completing a quest that can potentially steamroll your party, so it pays to have a good variety. Once again Burroughs comes to the rescue, and can increase the number of demons you can carry at any given time by exchanging app points that are earned when the main character levels up. These apps range from increasing the amount of experience gained from conversing and fusing demons, to refilling your hit points and magic points as you walk around.

Those who recently purchased Soul Hackers are in for a different experience when it comes to exploring in SMT4. Where as Soul Hackers was presented in a first-person manner, SMT4 opts for the third-person view, which allows for some very interesting and diverse landscapes. The world map is a lot more expansive than in past SMT titles, and while it initially starts as a menu-based system, it opens up after exploring Naraku, the depths below Mikado. The development team also decided to do away with random battles, instead allowing players to juke around enemies to avoid battles whenever possible, or allow players to get the drop on enemies and do some damage before the fight starts and guarantee the first action, because if enemies get the drop on you, you're probably going to be making a visit to Charon.

I harp on the game's default difficulty because in the early going I was suffering through it, and honestly it made it a little difficult to pick up and play this game. After a few consecutive deaths, the game gives players the option to lower the difficulty. This in no way affects the game's outcome, but is merely there to allow you to get through the game should you be having a hard time. Once you get rolling and make your way out of what could be considered the tutorial portion of the game, it becomes a bit easier to survive, but I can't repeat this enough, keep your guard up and save often. Burroughs may tell you to be careful when going up against a particular demon, and warn you of quests that are out of your league, but when it comes time to battle she offers little assistance. Another hindrance to the game is the overworld map, which does a terrible job in cluing you in on where things might reside. In fact, it is actually easier to look up a map of Tokyo, and use that in order to find specific locations that you might be looking for.

Shin Megami Tensei 4 is a great JRPG, and though the characters play a little too close to archetypes that we've all seen before, the story and mystery to the game's world will drive players to complete the task of tracking down the Black Samurai, and the quest is no slouch in terms of length, you'll be spending at least fifty to sixty hours getting through this game, despite what the in-game counter tells you, because you'll be backtracking a couple of times when you get complacent, and think you're doing fine, only to die unexpectedly, it's going to happen, I guarantee it. SMT4 is a game that won't hold your hand, but is extremely rewarding for those who are looking for a good challenge and an engaging story.
Shin Megami Tensei 4's worst enemies are 3DS battery life, and the at times off-putting difficulty. Conquering this game is certainly satisfying and the storyline is engaging enough to make the effort worth it. Side note, Atlus, these nearly ten year cycles between sequels need to tighten up a bit.