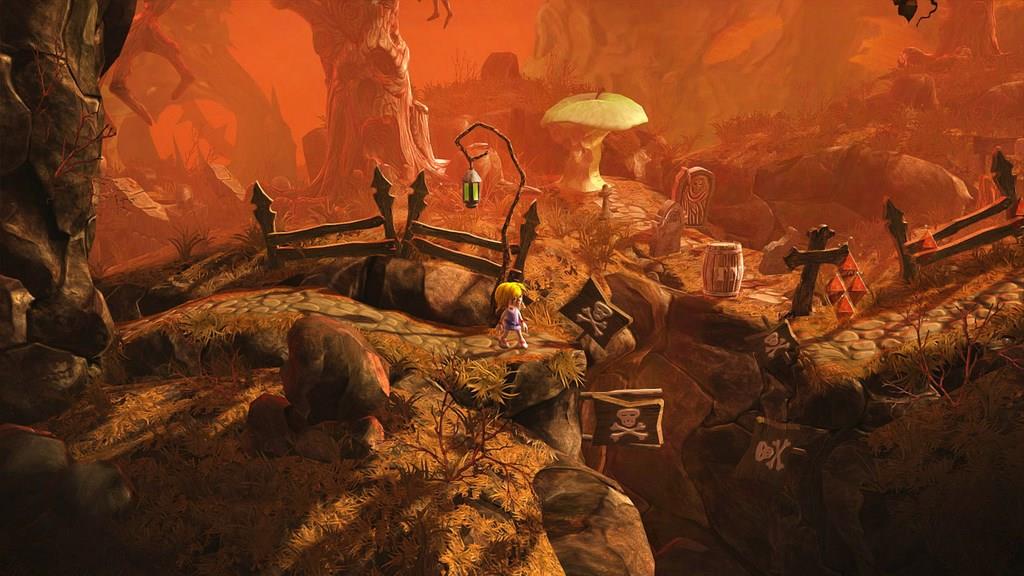 Written by Nathan Carter on 7/16/2013 for PC   PS3
More On: Giana Sisters: Twisted Dreams
The following review is brought to you by Kickstarter supporters like you! No really it is. “Project Giana” finished it’s Kickstarter campaign in August of 2012 with over $180,000, around $25,000 more than their original goal. I absolutely love Kickstarter and how it can make games become reality when normally they wouldn’t be able to.  So here we are about nine months later and we received the final version of Giana Sisters: Twisted Dreams to review. Did all the backers get their money’s worth? Let’s find out.

Gianna Sisters: Twisted Dreams is a direct sequel to Giana Sisters DS released in 2009, which in turn was a reimagining and sequel to the original game back on the Commodore 64. The original game is most known for being a rip off of Super Mario Bros., which actually got the game into legal trouble back in the '80s. Enter “The Great Giana Sisters” into Google images and you will think you accidentally entered in Super Mario Bros. So how does this brand new entry into the Giana Sisters franchise fare? Luckily, Giana Sisters: Twisted Dreams is fun for the most part, but does come with frustration at times. 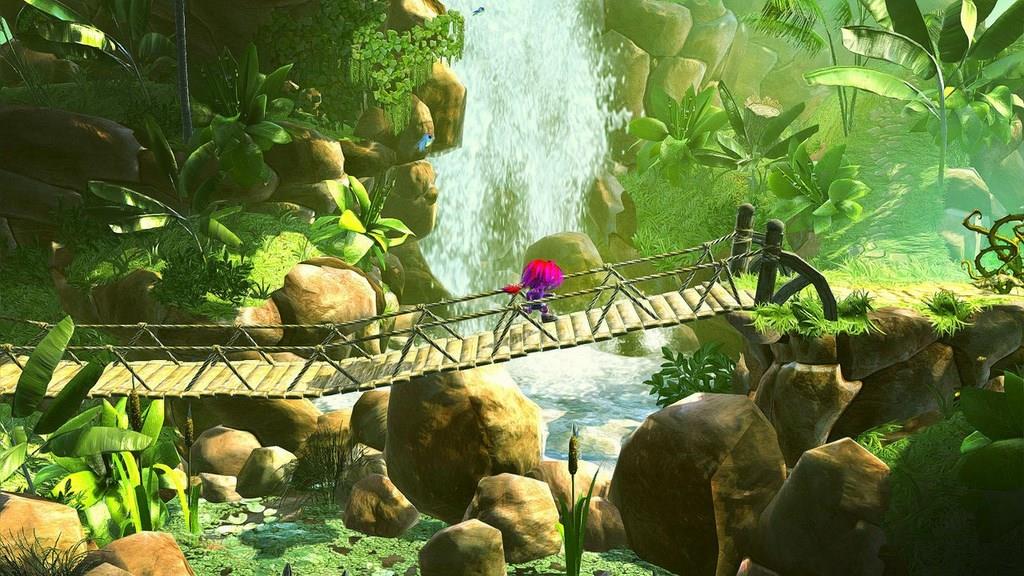 There is not much in the way of a story, but games like this usually let the game tell the story for you. Your sister Maria has been kidnapped and you have to work your way through the game to save her. You play as sister Giana and platform your way through each level. At first the game seems pretty standard without any challenge. The great part is that they slowly ease new enemies and hazards your way as you complete each level. What makes Giana Sisters so unique is that you can enter a “dream world” at any time by simply hitting the right trigger button. The entire level will switch over to a dark nightmare world and this ability isn’t just for looks. By switching, you also change Giana from “cute” Giana to “punk” Giana and with that, the game changes as well. As you progress you will encounter doors that can be opened, floors that can only be walked on, platforms that go in certain directions, and hazards that can only be passed when you in either cute or punk form. It really adds to the challenge of the game and I love how it makes you think as you progress through the level. Cute Giana and Punk Giana also come with special abilities. Cute Giana can twist in the air slowing down her free fall which will allow you to pass over pits safely. Punk Giana has the ability to fly through the air as a fireball and can bounce off walls. You can use this to destroy walls and you can even get to certain unreachable platforms with this ability. Now with platforming games, good control is one of the most important things about the game, and thankfully I can say that the gameplay is very good. Jumping, switching forms, and hopping from platform to platform is very smooth and I never once died because I was having trouble controlling the character. Punk Giana's fire attack can at times get annoying as you will find yourself flying over the screen in directions you didn't want to go but with practice you can prevent this from happening.

You will also encounter certain gems in each level that will boost your score. Blue gems can be picked up by either cute or punk Giana. The red and yellow gems can only be picked up depending on which form you are in. You don’t really need to pick these up unless you want to boost your score for the leaderboards. Picking up the gems does add to your total stars you get by completing levels. If you are the type of person that likes to collect things in platform games, you will have a blast with this as there are tons of gems to pick up, but as I progressed through the game I realized that I didn't really need to collect them. You don’t get extra lives by picking them up as you have unlimited lives in the adventure mode. When you die, you simply start back at the latest checkpoint. I have mixed feelings about this. It somewhat makes the game easy since you can retry the level over and over again until you beat it, but at the same time it would be nice if there were an added challenge of knowing you only have a certain amount of lives to get through the game. There are game modes that you can play where you have “lives” and where gems matter, but I’ll get to that in a second.

I mentioned before the game will slowly introduce new enemies and hazards to you, but there comes a time when the fun will slowly turn to frustration. When you get about halfway through the game, you will notice that the difficulty level spikes to frustrating levels and becomes an exercise in extreme trial and error.  What happens is that the game starts introducing you to hazards one after another which can only be passed based on what version of Giana you are using.  This means that you will be constantly switching back and forth between cute and punk Giana on the fly and in rapid succession to advance through the levels. Combine this with both cute and punk Giana’s skills as well as switching back and forth to avoid hazards and it will begin to test your patience. Luckily, checkpoints become plentiful as you advance as well, so constantly dying--while frustrating--isn’t the worst thing in the world. I like these types of games where it presents a real challenge to you and keeps you on your toes. It’s not frustrating where you have to make tons of tricky jumps and maneuvers where you will pass it if you get lucky. You will die, a lot actually, but the game makes you want to keep going. 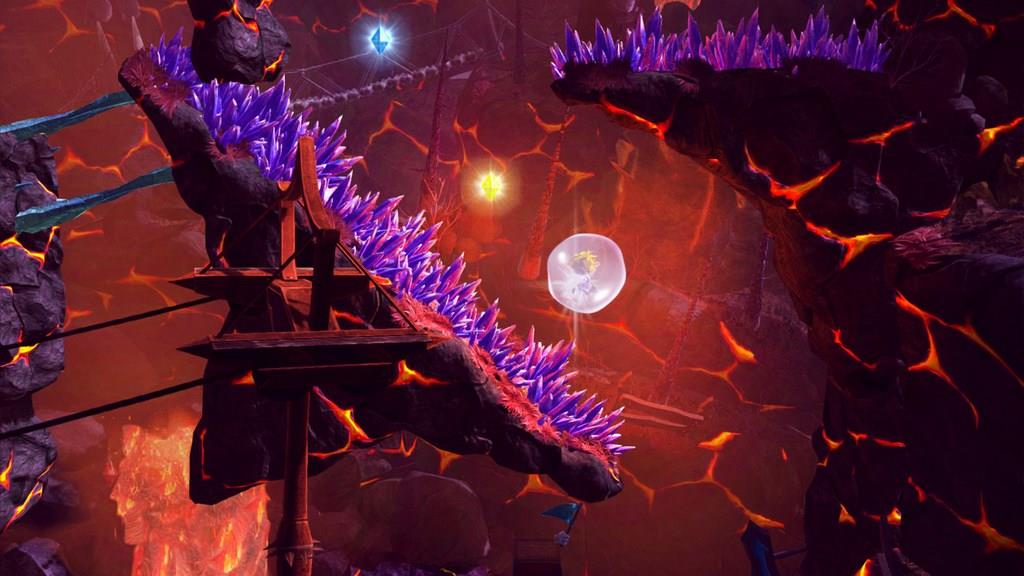 As I mentioned earlier there are other game modes adding replay value to the game. Once you unlock levels they can be played in either score attack or time attack modes. They are pretty self explanatory. In time attack, ignore all the gems and complete levels as fast as you can. For you people that love collecting things, you have score attack. Gather as many of those gems as you can find as they all will add to your total score at the end of each level. Finally, if you are up for the challenge, you also get hardcore mode to play in which checkpoints are removed from the game, so if you die, you start at the beginning of the level. If you are hardcore enough to complete that mode, you get the ultimate challenge: Uber Hardcore mode. Uber Hardcore is, well, uber hardcore. Whoever came up with this has a sick and twisted mind. You die, you go all the way back to the beginning of the game. You better have every stage memorized to complete this cause there are plenty of opportunities for you to screw up sending you all the way back to the beginning.

Speaking of switching between cute and punk Giana, not only will the character change but the entire level will change as well. The graphics for the levels are beautiful and have a LittleBigPlanet feel to them, in my opinion. You get a beautiful world filled with tons of green grass, crystal blue water, beautiful skies, and lovely butterflies. Switch to punk Giana and you get a world filled with a brown dirt ground, dark and menacing red skies, and green acid pools. The nightmare world looks beautiful as well and is truly a 180-degree switch from the normal world.

On the audio sound of things, you don’t have much in the way of sound effects, but that’s okay because the music is one of the best parts of this game. The developers brought back one of the composers of the original Giana Sisters game, Chris Hülsbeck. The music in the game consists of his original tunes when you play as cute Giana and when you switch to punk Giana, the game will instantly switch to a heavy metal remix of the original soundtrack by heavy metal band  Machinae Supremacy and composer Fabian Del Priore. This is amazing on so many levels. I guess it has to do with the fact that I love to listen to classic video game tunes on YouTube and then try to find heavy metal remixes of the same tracks. Either way, I found this to be a pretty cool and innovative way to pay homage to the original game and provide and pretty awesome soundtrack for the new game.

All in all, Giana Sisters: Twisted Dreams is a great game and gamers looking for a decent platforming adventure should check this out. Sure it can get frustrating when you find yourself dying over and over again, but I found myself wanting to keep going, trying to figure out how to advance through parts of the levels that were giving me problems. Once you beat the game, there is plenty of opportunity to keep playing. Whether you are someone that loves to collect things, or for those of you that love speed running levels in games, you will find tons of fun in this game. For those of you who are ready for the ultimate challenge, be sure to give hardcore and uber hardcore mode a try. You thought the game was frustrating before? You haven't seen anything yet.
Giana Sisters: Twisted Dreams is a very fun platformer that you should definitely check out. Sure it can get frustrating at times, but at least it doesn't make you want to throw the controller at your TV. The graphics are beautiful, the gameplay is solid, the music is amazing and there is plenty of reason to come back to the game after you finish it.