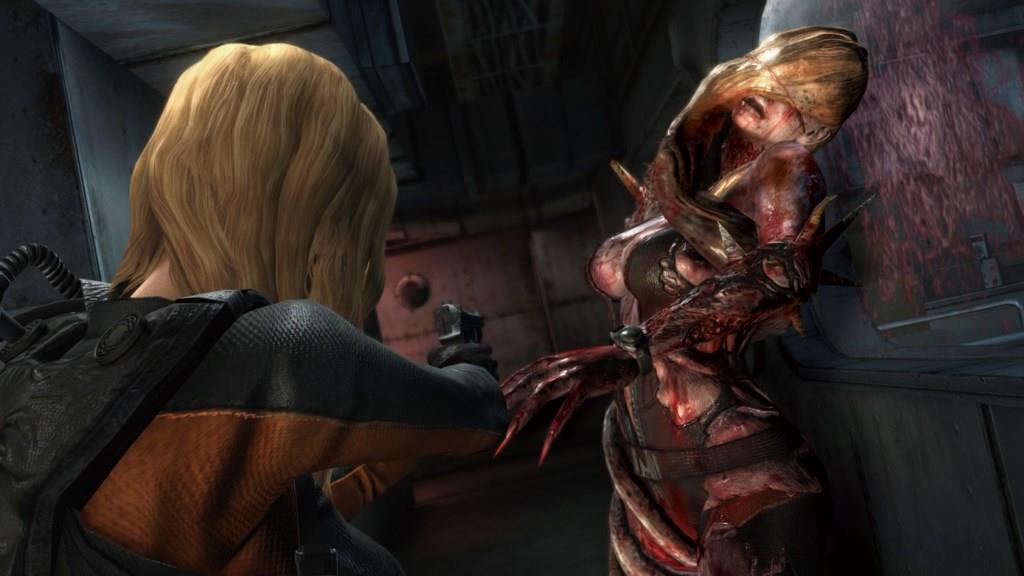 Written by Cyril Lachel on 5/20/2013 for PC
More On: Resident Evil: Revelations
Contrary to what the title would have you believe, there aren't any earth-shaking revelations in Capcom's newest Resident Evil game. In fact, nothing about this modestly-sized adventure fills in gaps in the Resident Evil mythology, instead opting to weave an entirely new story that barely connects with the numbered sequels. What we're left with is a fun, if not familiar, side-story with plenty of mutated monsters and exploding set pieces.

Released a year ago on the Nintendo 3DS, Resident Evil: Revelations is the first game in the franchise to go from a handheld to current generation console.  The release order may be unorthodox, but fans of the long-running survival horror franchise will feel right at home in this better looking PC port.  It may not be the next-generation Resident Evil we're waiting for, but at least it will wash away the bad taste of Resident Evil 6.

Outside of appearances from Jill Valentine, Chris Redfield and a passing mention to the now-defunct Umbrella Corporation, Revelations barely has anything to do with the Resident Evil series. If Capcom wanted to, they could have just as easily slapped on new characters and changed the name, not unlike what they did with Dino Crisis and Devil May Cry.

The story revolves around a terrorist group who is threatening to pollute the seas with a brand new virus, thus turning the underwater life into unstoppable, blood-crazed monsters. Jill Valentine (survivor of Resident Evil 1, 3 and 5) is joined by Parker, a brand new character with a thick accent. Together they are sent to an abandoned luxury cruise ship in the Mediterranean Sea.

At the same time, Chris Redfield and his partner, Jessica, are searching through snowy mountains for information on the terrorist organization. It doesn't take long for everybody to realize that Jill and Parker have been sent into a trap, and the rush is on to rescue the two agents and stop the terrorist's nefarious plans.

Taking a cue from episodic television shows, Resident Evil: Revelations is split up into 12 individual episodes (yes, the game calls them episodes).  The episode structure allows the developers to tell several different stories at once, each adding up to a big twist ending. Players will bounce around through time, jump from place to place and see events from a half dozen points of view.  And to make it feel even more like a TV show, each episode starts with a brief recap to bring players up to speed. Just about the only thing missing are commercial breaks and previews for the next episode.

Think a luxury cruise liner will be a welcome change of pace to the usual Resident Evil locales? Think again, because nearly every section of the ship feels like it was pulled out of a different (sometimes better) Resident Evil game.  Even if it's not a proper mansion, it's clear that Capcom can't stay away from that motif. Thankfully there's a gentle sway back and forth to remind us that we are indeed on a boat, otherwise I would have completely forgotten. 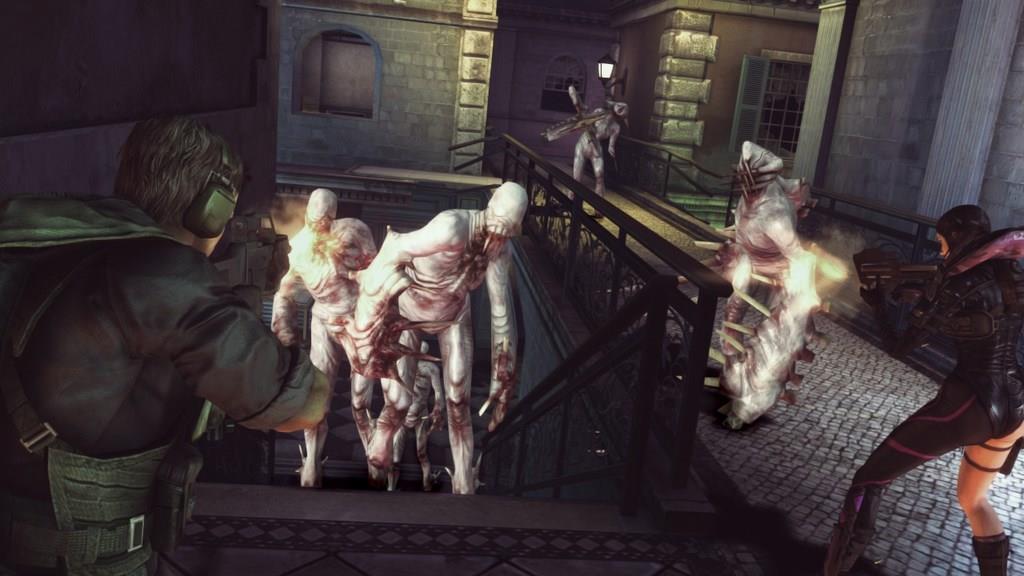 With the exception of Chris and Jill (and possibly Parker, if you're feeling generous), the supporting cast is mediocre at best. Jessica wears the most outrageous wet suit I've ever seen and never once has anything interesting to say. Raymond looks like the Joker, as performed by Conan O'Brien.  And then we're introduced to Quint Cetcham and Keith Lumley, the Jar Jar Binks of Resident Evil.  These two loudmouthed jokesters are here to remind you that there once was a time when this franchise was considered scary.

From a storytelling standpoint, switching between characters makes a lot of sense. We're able to see it all unfold like never before, giving the player a better understanding of what the story means. But as narratively convenient as it is, I found that it worked against the spirit of Resident Evil. Part of what makes these games scary is the feeling that you're all by yourself. In Revelations, you're always aware that Jill is not alone. Not just in the always-present computer-controlled partner, but also with other characters working their hardest to save the day. A lot of the tension that is created early in the game is squandered by episodes that take us too far away from what's interesting.

Anybody familiar with Resident Evil 5 will feel right at home with Revelation's control scheme. For better or worse, this is a third-person shooter with occasional jump scares. No matter who you control, everybody is able to hold three upgradable weapons and an assortment of grenades. Observant players will find just enough ammo lying around to keep the always evolving enemies at bay.  And you won't need to worry about mixing herbs anymore; nearly every element has been streamlined and simplified. 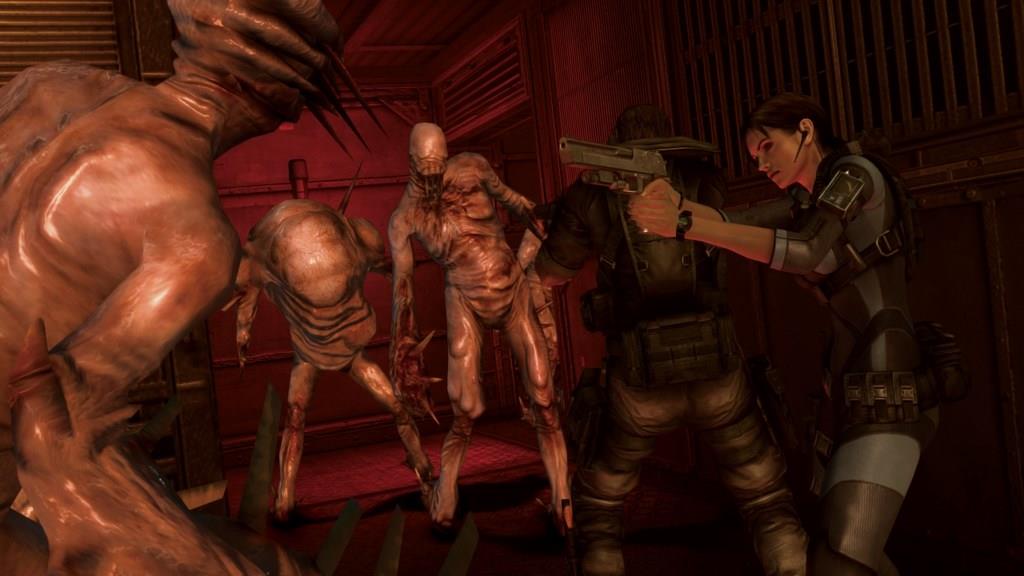 Unfortunately, not every element has been streamlined. Half way through the game, Revelations introduces underwater exploration. If you thought Resident Evil's controls were clunky on land, wait until you're forced to hold your breath underwater. Even the simplest tasks were made needlessly complicated thanks to poor swimming controls. Far too much of the game relies on this questionable mechanic.

Despite some misgivings, there are moments when I was genuinely impressed with Resident Evil: Revelations. At one point the game's world becomes a Michael Bay disaster movie, making way for one of my favorite set pieces in the franchise's storied history.  Unfortunately, there isn't enough of that. There are a lot of rehashed ideas found in Revelations, enough to distract me from an otherwise interesting thriller.

As far as HD ports of Nintendo 3DS games go, Resident Evil: Revelations is the best looking. The backgrounds are sharp and the characters looked really good on my computer monitor. It's a vast improvement over the handheld version, though a noticeable step down from Resident Evil 6. With massive boss battles and some pretty goofy costumes to unlock, I don't think too many people will be disappointed with Revelation's graphics. 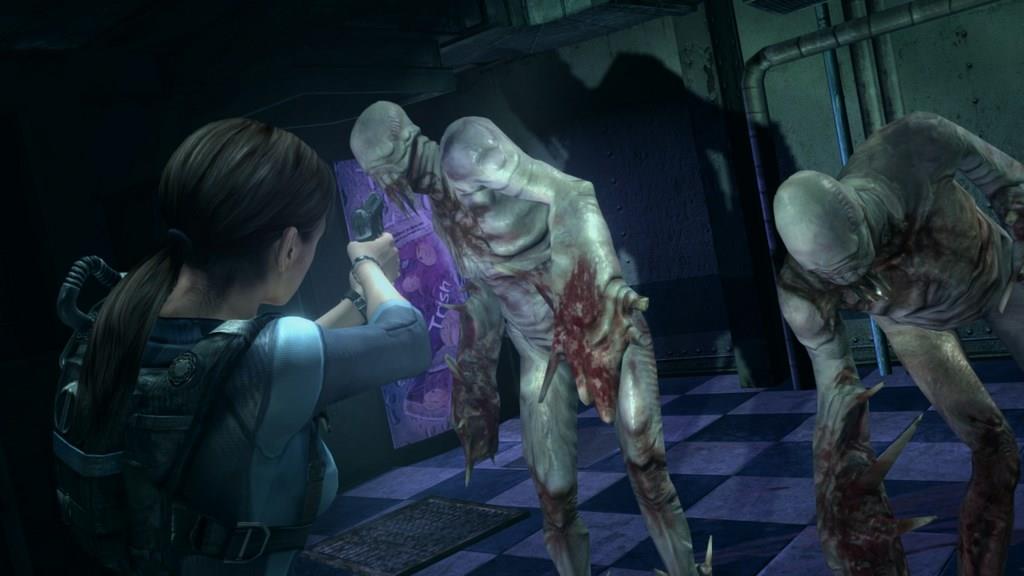 No matter how pretty the graphics are or what hell you put Jill Valentine through, it seems clear that Capcom is out of ideas for Resident Evil. Now that they've solved all of the main series mysteries, Capcom is at a point where they need to push the reset button and start fresh. None of the new mysteries found in Revelations are especially interesting, and I ultimately found myself more frustrated than intrigued.

But it's worse than a few unappealing mysteries. The real problem is in the writing, and how it seems to gloss over incredibly important information. Early on, Revelations spends a couple minutes talking about Terragrigia, a city that was literally destroyed by a giant light-shooting satellite in the sky. The game comments that this is the same thing that happened in Raccoon City; the government decided to simply wipe out the city instead of curing the problem. Even if you buy into their comparison, the problem still remains that we have no emotional attachment to Terragrigia. I cared about Raccoon City because I saw what happened to that city from multiple points of view. In Revelations, we're asked to have to same level of attachment to a city that's all but mentioned in passing.

And I found that level of lazy writing throughout the game. At one point the terrorist leader unmasks to reveal his true identity.  It's the kind of big reveal a TV show will lead up to, finally unmasking the mysterious figure during sweeps week. But here the man takes off the mask and reveals that he's a brand new character, one we'll spend no time getting to know. He is so two-dimensional than the only thing I remember about his character is that looks exactly like Walter White on Breaking Bad.

Resident Evil: Revelations is simultaneously a step in the right AND wrong direction. On one hand, it's certainly an improvement over Resident Evil 6. Then again, it's also a game that hangs on to too much of what makes this franchise so vexing.  There are some good ideas here, but ultimately there are far better Resident Evil games on the market.
A high-definition PC port of a Nintendo 3DS game, Resident Evil: Revelations fails to offer any earth-shattering answers for longtime fans of the franchise. What they'll get instead is a modestly sized thriller with an annoying cast of characters and a completely nonsensical plot. On the other hand, it's still better than Resident Evil 6.