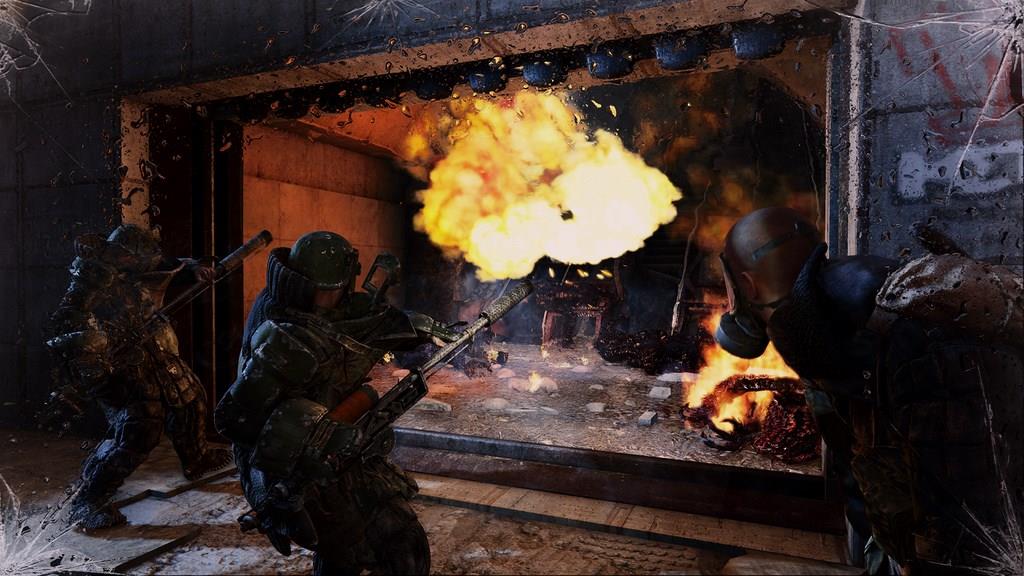 Last Light’s predecessor, Metro 2033, never garnered a huge following. It’s considered a cult classic, driven forward by a narrative based on the book of the same name by Dmitry Glukhovsky. With Last Light, 4A Games is steering away from the canon of the novel’s sequels, opting instead to create their own story.

That decision paid off.

Last Light is a paragon for video game narratives. It’s ripe with characterization, direction and effect, but it doesn’t sacrifice player agency in the process. It struggles to find a strong pace during the first few hours, as it leans a little too heavily on exposition, but its latter half builds to a climactic ending that lets gameplay and story compliment each other instead of detract.

Although you had a choice between two resolutions, Last Light picks up where the “bad” ending of 2033 left things: in a bid to save the remnants of the human race living in Russia’s post-apocalyptic subway tunnels, Artyom launched missiles against the Dark Ones –– the supernatural race that threatened their sanctum. This left a wasteland where the Dark Ones’ home used to be. Last Light’s story explores several human factions’ struggles for dominance over the others following the bombing.

There’s a hefty dose of social commentary on racism and politics, all with supernatural undercurrents. Neither seem forced, and actually elevate the story to a better place as Last Light progresses. By the end, you’ll discover ulterior motives and villainous plans that help the plot be about more than just survival.

All of this is contained within a living, breathing, believable world. The human stations scattered throughout the tunnels seem lived-in, the characters all seem real. I felt compelled to eavesdrop on any conversation I could, if not to learn more about the world then just to overhear Last Light’s genuine dialogue. Each location is memorable in its own way, and I found myself pulled off the beaten path more than once on the way to each new objective.

You’re channeled between set piece moments that provide variety along with spectacle. Before the credits rolled, I guided a car along a railroad lined with enemy soldiers, tiptoed through an abandoned city rife with booby traps, and fought off a giant mutated bear. These scenarios make up a fraction of Last Light’s 12-hour duration –– it’s a long campaign by today’s standards, but the near-excellent pacing proves shooters can still aim for this length.

It’s hard to label it merely as a shooter, though. The nuclear war that spawned the Metro series left little ammunition strewn throughout human outposts, meaning you’ll have to scrounge for every last bullet below, and above, Russia’s surface. Radiation forces you to wear a gas mask to avoid suffocation, and limited oxygen tanks give you one more thing to search for. The survival aspects of Last Light lend urgency to its slower moments, helped all the more by its believable world of swamps, tunnels and ravines. 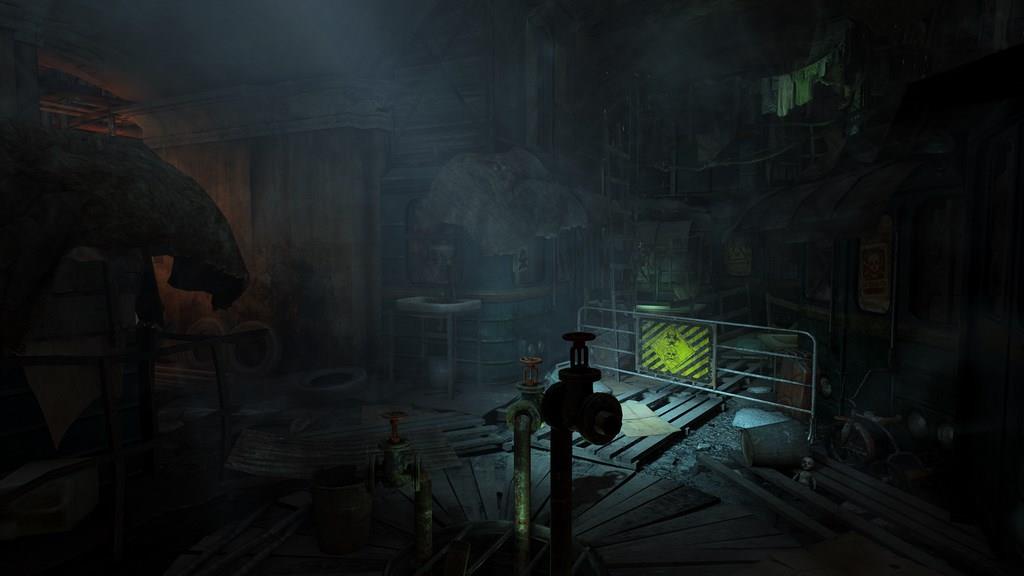 While Metro 2033 had a similarly engrossing atmosphere, its gameplay mechanics held it back. Enemy movements were choppy, their sightlines were inconsistent, and they always seemed to know where you were once they found you, regardless of where you hid. The broken stealth mechanics almost demanded that every situation be turned into a guns-blazing approach.

The same can’t be said about Last Light. I actually had a choice this time around. Not counting the situations where I was forced to kill, I opted to sneak around my human enemies every chance I could. This pacifism saved me precious ammo and supplies, but also let me take advantage of Last Light’s stealth system.

For situations devoid of flying bullets and constant explosions, crawling through darkened corridors and quiet rooms is intense. Much of combat is about manipulating the lighting in Last Light’s environments. Stay in the shadows, and you probably won’t be spotted; waltz through the center of a bright room, and you probably will. You can even shoot light bulbs with your weapons and blow out lanterns to make each new area your playground. Last Light’s stealth mechanics are consistent, meaning I rarely wondered whether a guard would see me or not, and if he did, I knew I could hide without some omnipotent AI guiding the guards to me.

Humans aren’t the only enemies you’ll encounter. Fighting mutated spiders makes you reverse your strategy and actually increase the lighting present, as the scampering creatures are afraid of light. Your flashlight is your best weapon against them: shine it on them long enough and they’ll flip over, exposing their vulnerable bellies. 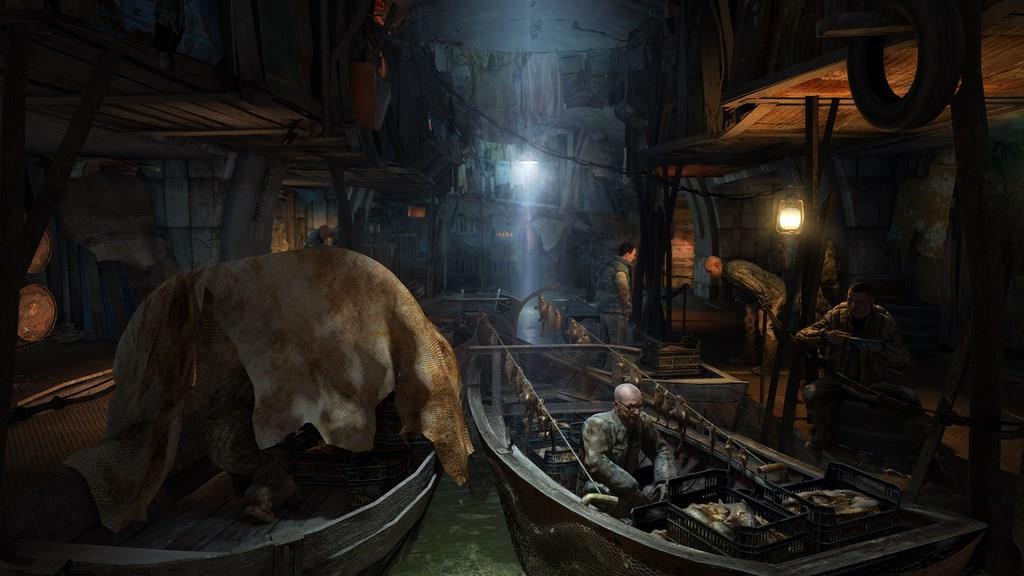 This manipulation of each area and its inhabitants pulled me even closer to the world of Last Light. As it progressed, I became more concerned with battling the environment instead of soldiers. I could have used all of my ammunition to clear a bridge of mutants, but I opted to sneak through a nearby train car, without any penalty to show for it. While the variety in enemies, approaches and exploration never let boredom settle in, the same can’t be said for the occasional feeling of frustration.

There are several difficulty spikes that stop Last Light’s momentum. Throughout its first half, there aren’t too many situations where you’re actually forced to kill, aside from a few small encounters. About midway through, however, scenarios arise that can make your inventory disappear in a matter of minutes.

The first of these scenarios forced me to reload a checkpoint three times upon death. While the rest of Last Light isn’t easy, this case was a result of me losing every last bullet and item I could use against the charging mutants. I finally made it through after a few lucky strikes with my melee weapon, which was a last resort. If I hadn’t been scavenging so diligently up to that point, I don’t know how I could have proceeded without restarting the entire level. 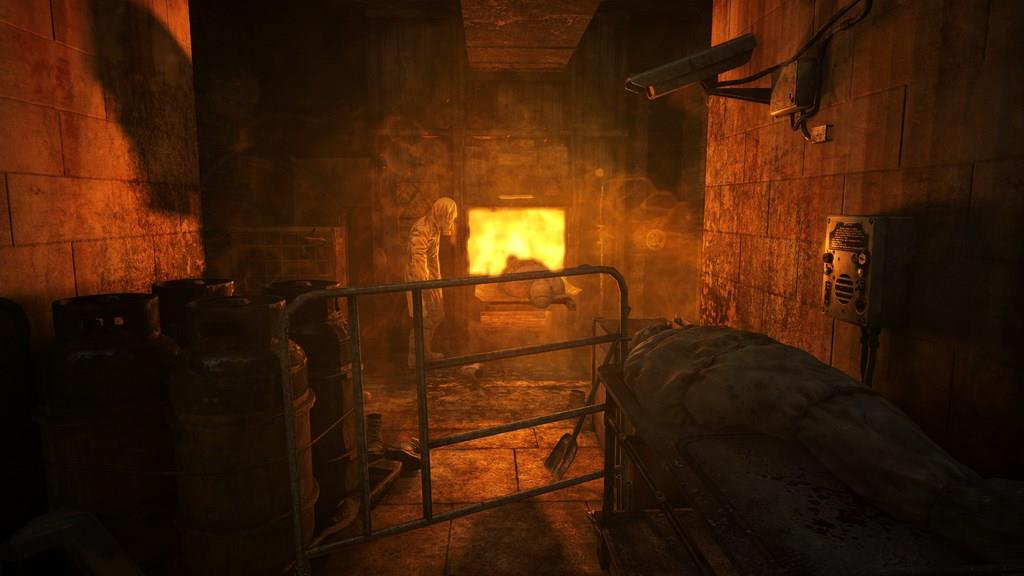 The unique currency system that carried over from Metro 2033, in which bullets used as currency can also be used for increased weapon damage, can be a godsend in those situations. Although they can only be used for certain weapons, the military grade bullets provide much more damage this time around, and also ignite your target. There is a tradeoff though, as using them means you won’t have as much to spend on weapons and ammo in the next town. This isn’t a huge deal on lower difficulties, as there is a variety of weapons lying around Last Light’s environments, but the risk/reward factor increases when there are even less opportunities for scavenging.