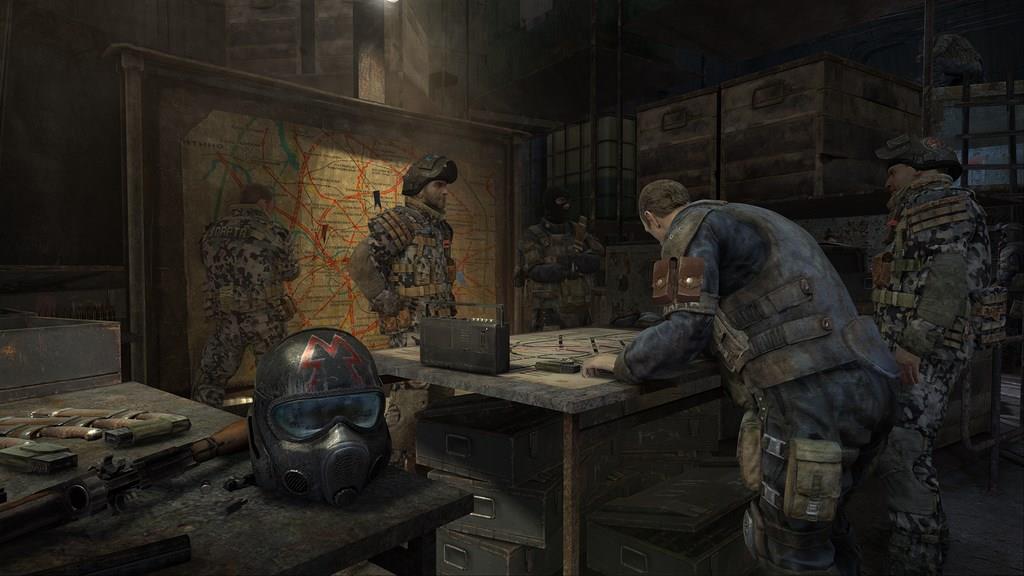 Written by Jeremy Duff on 5/7/2013 for 360
More On: Metro: Last Light
If you have never played through the original Metro 2033, I feel sorry for you. I really do. The game, which launched for the Xbox 360 and PC back in early 2010, really shocked a lot of people. It wasn’t the best looking, or even the best playing game or shooter available, but the atmosphere and narrative presented in its world set a standard for the industry. A standard, might I add, that few games will ever live up to, let alone exceed. It was one of my picks for game of the year that year, a decision I still stand by to this day (either that or War for Cybertron).

For the sake of those who aren’t familiar, let me catch you up. Metro 2033 is based on the Russian sci-fi novel of the same name by Dmitry Glukhovsky. After nuclear war practically destroyed the world as we knew it, the survivors in Russia were driven below ground to the confines of the defunct metro-subway system. The different stations along the transit system eventually became their own communities and “cities”, forming their own governments and societal structures.You’re Artyum, a young man raised in the confines of this post apocalyptic-Moscow metro system. The game presented itself as an FPS, but it didn’t exactly play as one. Rather than being an adventure about gunplay it was an incredibly deep narrative told from a perspective behind the barrel of a gun. It was, and is, truly a remarkable experience that I can’t speak highly enough about to this day.

With all of the dust finally settling from the fall of THQ, Metro: Last Light is finally coming to consoles after some delays. Ukranian developer 4A Games is once again at the helm of the project with Techland / Deep Silver picking up the publishing duties. Over the last weekend, I got a chance to spend a few hours with an unfinished build of the game that covers the opening chapters of the game. What I found was more of the same of what resonated with me so much back in 2010 and a newfound excitement for a project I feared wouldn’t recover from the collapse of its publisher.

Living with your choices and confronting your past
The game will pick up a little bit more than a year after the events of the first game. If you played the original, you know that there were a couple of possibilities for the ending depending on how things played out and decisions that you made once you climbed atop the spire. Despite the telepathic cries that Artyum heard during the final moments of the game, which revealed their dreams of a peaceful co-existance, the game progresses as if you decided to launch the missile strike against the Dark Ones.This wiped out their entire population. Or, at least you thought that it did.

Once again you’re Artyum. The people around you look upon you as something of a hero, especially amongst the rangers within your area of the metro, but you are personally struggling with the decision that you made to wipe out the Dark Ones. Everyone thinks that the Dark Ones meant nothing but harm, but you know the truth and it haunts you in your dreams. You will soon see a glimmer of light however as reports come in that a young Dark One was spotted roaming around the infamous Botanical Gardens that should have been the mass grave of their kind. It isn’t very long before the game opens that you find your self face to face with the very beings you tried to eliminate a year earlier. You will also discover that your connection to their kind is as close as ever, which will get you in a bit of trouble as usual. I won’t get too much into the details of the story; not just for fear of spoiling things but because the story is SO much of the Metro experience. Like I said earlier, it’s best to look at this as more than a game, but rather an interactive, narrative experience. 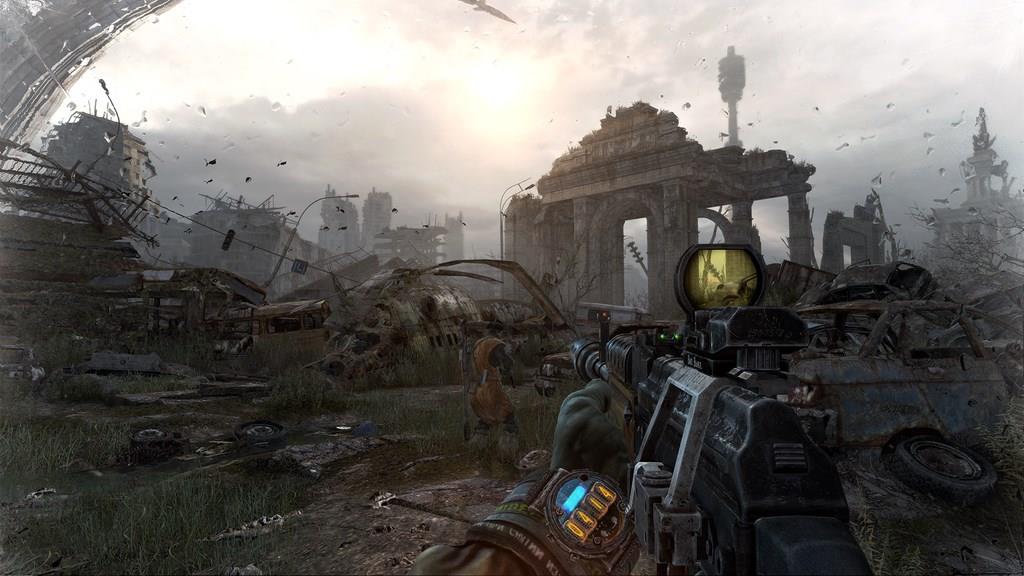 More of a good thing
One thing that I noticed from the start of the game is that 4A obviously knows what worked in the first game as they are continuing to allow the narrative drive the Metro: Last Light experience. The game looks noticeable better than the original; the character models are a bit more detailed and their animations are much tighter. The same can be said for the environment, which all plays into the game’s charm. This is a world that you can easily get lost in, and the developer knows and accepts this fact. It is very easy to get sidetracked by just looking around, reading notes and diaries that you find and listening in on conversations of other characters in the world.

This level of immersion is only enhanced by the manner in which the game is presented. The game once again uses a HUD-less interface. If you want to read something or check the ammo count on your weapons, you have to physically look at those objects. Granted, there are pop-up overlays for your inventory management and selection some times, but it is very minimal something that you have to do in real-time with the world around you. Don’t decide to search your pack for a certain type of ammo when you are under fire, because the action doesn’t stop so that you can fiddle around. One really nice detail occurs when you had your gas mask on to explore the surface areas; dirt and debris constantly built up on the mask and had to be wiped clean occasionally, in addition to changing the air filters. This sounds like a nice little detail, but it becomes important when you are in a fire fight or on the run and can’t see where you are going. It is truly an unparalleled level of immersion.

Another thing that I really appreciated in the original game is the attention to detail with the weapons. This is a world that has been devastated and forced to practically start over. You aren’t going to find state of the art weaponry and tools to use. I am referring mainly to the reliability and accuracy of these weapons. These are things that have been crafted by the new society; they are prone to breaking and misfires and are best described as less-than-accurate most of the time. This means that you have to do the best with what you have and what you can find. 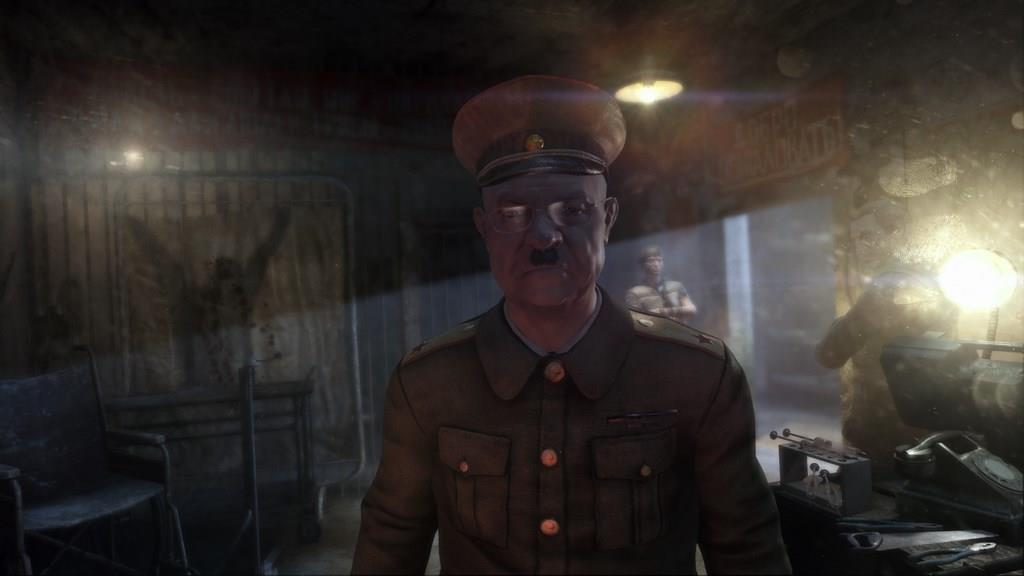 You’re a survivor, so survive...
Being a world that has been rocked to its core, supplies aren’t exactly in abundance. What you will get you will have to scavenge and find on your own. Ammunition in particular is a rare commodity that you will have to manage with great care. There are different types of ammo once again: those meant for shooting and military grade that is best used as currency. The basic ammo, much like the weaponry, is not as reliable and useful as you would hope. They aren’t nearly as damaging to your enemies as you would hope when in a fight for your life. Military ammo on the other hand is deadly, but it is also very valuable. The question that you will constantly be faced with is whether or not that ammunition means more to you as a defense mechanism or as currency.

Neither one comes easy or cheap. What you will get you will need to loot from fallen enemies and pick up in the various tunnels and alleys of the metro. The same thing can be said for your other tools like gas mask filters and support weapons (throwing knives). Don’t expect to find a nice ammo crate or supply dump that will fill up your inventory and set you on cruise control for a while. Instead, you will spend some of your battles crawling around, ducking under cover while you search for a bullet or tool to use. 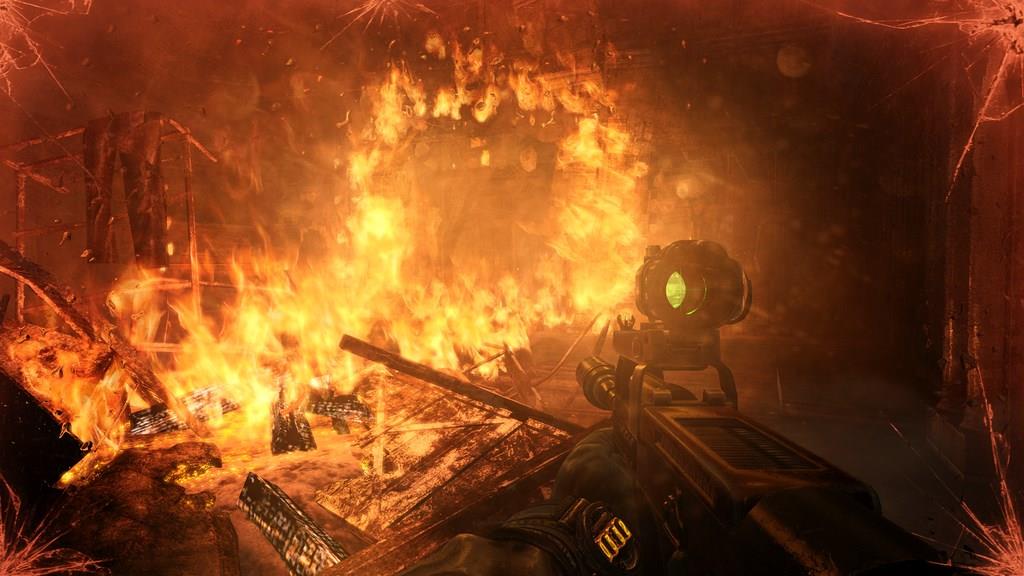 Trust me: look past the barrel of the gun
It is really hard to talk about Metro: Last Light without spoiling things. That is because the game is so story-driven. More than being story-driven, it is designed in a way that gives you access to a deep and engaging story, but doesn’t force you to embrace it. This is more than an adventure from point A to B; you can run through things and complete your tasks and missions at a break neck speed, but doing so will cause you to miss out on everything that makes this experience fantastic. Take you time here. Embrace and explore the world around you. It’s okay, the developers actually want you to do so and you won’t be sorry.

If you do that, if you take the time to see and listen to this world, you will undoubtedly fall in love like I did back in 2010. 4A is making quite a name for their selves with this franchise and they are proving that good narrative and structure can trump gameplay if need be. In this case it does, even though it doesn’t need to as the game plays fine too. Fans of the series are in for a treat when Metro: Last Light launches next week on the PC, 360 and PS3.