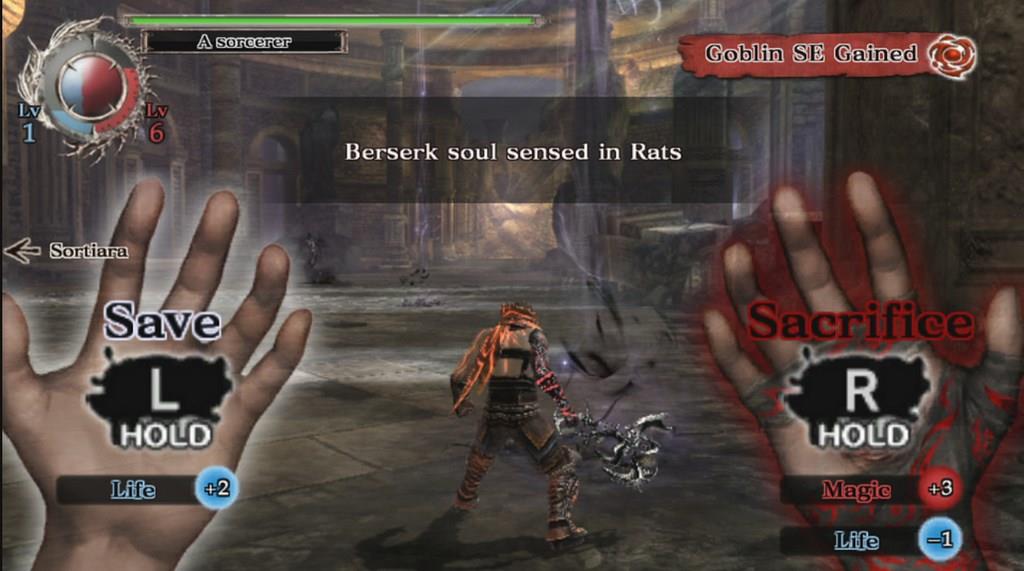 Written by Jeremy Duff on 4/23/2013 for Vita
More On: Soul Sacrifice
I haven’t quite been sure what to think of Soul Sacrifice in the many months since Marvelous AQL and Studio Japan revealed the project. Part of me has really wanted to get excited as the action looked fast-paced and frantic, combined with the depth and customization usually reserved for the deepest of RPG’s. That much had me hooked, but the concept was so off the wall that even I had some reservations (which is really saying something). Seriously, a game where you sacrifice yourself to make deals with the devil for power all while dealing with a talking / living book. It sounds cool, but I can imagine this going drastically wrong very easily.

The project looked like a solid game that was using an edgy-topic for its story simply for added shock value. That is the part that really scared me: did it takes itself serious enough to live up to its potential or does it throw everything they can imagine in just for the sake of shocking the players? That is what I thought was going to be the deciding factor on the success of the game. Now, less than a week from the game’s official release, I have finally gotten a chance to experience the twisted world. It plays every bit s as good as I had hoped and it is as over the top as I had feared, but it turns out that the outlandishness of the game works a lot more in its favor than I ever expected.

A twisted, yet fascinating world
As I described above and you have likely seen in the trailers, this is a very dark and twisted game. Yes, the entire concept is on you being willing to sacrifice yourself and yes, your entire adventure is narrated and guided by a talking demon book. It’s weird, disturbingly weird even, but it works. Here is the just, you are moments away from being put to death and seemingly sent to Hell when you discover a journal. This isn’t any ordinary journal, this is a living and breathing thing that claims to be your only hope for survival.

The journal chronicles the adventures of an evil sorcerer named Magusar and if you can learn enough about him, you may actually be able to beat him and ear your freedom from eternal damnation. Instead of playing through a single, flowing story, you will browse through a variety of influential events, presented as chapters in this devilish memoir, and relive them at your choosing.

One part Monster Hunter...
Each of the chapters plays out as a single mission, usually with the goal of eliminating some sort of dastardly creature. It is very easy to draw parallels between the structure of the game and Capcom’s beloved Monster Hunter series. Here, the book serves as your town hub, sending you on adventures to take down certain creatures. Once you have completed a mission, or a chapter, then you go back to your “hub” and choose your next excursion. It is a simple formula of rinse and repeat, but when you combine it with the addicting gameplay, which we will discuss here shortly, it really forms an enjoyable experience.

Things aren’t all “Monster Hunter” here though, as the title of the game references, there is a bit of soul sacrificing (quite literally) that takes place. After you defeat and enemy, you are able to determine whether you will sacrifice its remaining soul to the demons or grant it salvation to the Heavens. One give3s you the gift of life and grows your abilities dealing with your health and vitality (salvation) while the other feeds the dark power that is the source of your enemy. This serves sort of like the game’s ability tree in a way; will you find a perfect balance between the two or will you feed the evil inside and become an incredibly powerful being. 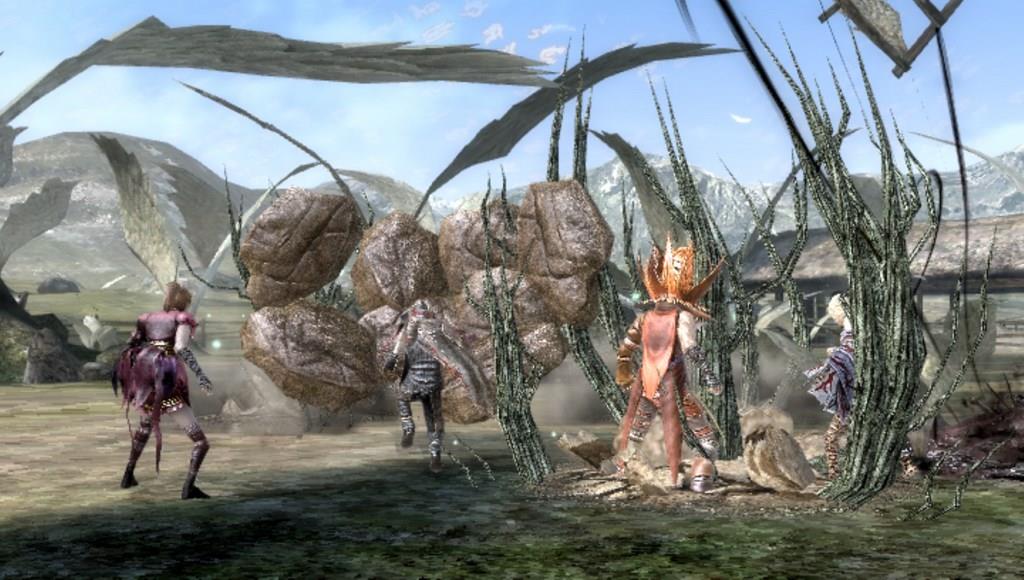 Seeing as how you are reliving / reading through the chronicles of this sorcerer’s life, you also get a chance to re-write history a bit. Your actions while reliving these situations can change the way things play out and possibly alter the being that you ultimately have to face in order to save yourself. It is really dark and twisted, but also incredibly interesting and something that makes you really consider your choices in battle.

One part Devil May Cry...
A lot of gamers might be turned off at the comparisons to Monster Hunter out of fear of a slow experience. Sure, the depth and strategic emphasis of battle would be welcomed greatly, but things are just so slow in that world. When it comes to actual combat, Soul Sacrifice plays something more akin to one of Capcom’s other franchises: Devil May Cray. This world is fast and frantic, at all times.

You will be switching weapons and hacking away at enemies at a nonstop, fast pace. We’re talking hordes of baddies too, not just one or two sprinkled here or there. They can get quite monstrous too, turning into practical boss fights that require you to survey your surroundings and their tactics and make a calculated approach to taking them down. It is in the combat portion of the game where the “sacrifice” aspect comes into play, even more so than determining the fate of your fallen enemies. 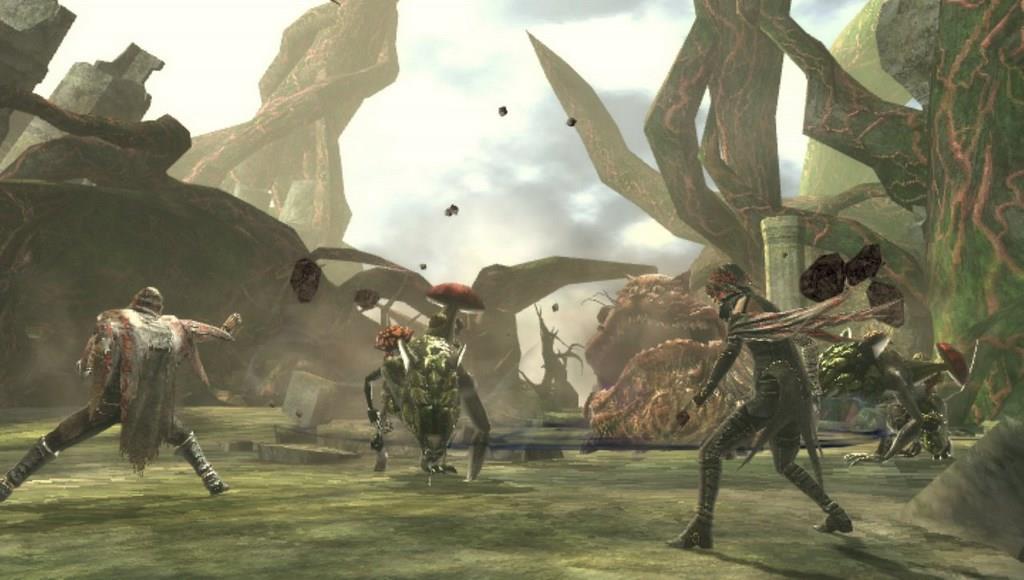 Your arsenal of weapons and power are all derived from sacrifices that you make to the demon world. This comes in the form of both physical items and aspects of your own existence. Sacrificing the bones that you have collected from the dead will grant you with the power to sprout a bone-like club from your arm to use as a melee weapon. Find the roots of different types of (living) trees will grant you powers associated with their different elemental properties such as the ability to shoot fire or ice. All of these things have thresholds to the fabric of their existence and will eventually be willed away to nothing, so you have to find a good balance between the items that you equip.

Personal sacrifices will also come into play as you will be given opportunities to call upon the demons to grant you great power in your battles at times, but they come with a cost. Recently, I was offered the chance to strike a deadly, burning (fire-based) blow to an enemy, but with the understanding that doing so would both scar my character’s body eternally and weaken me in a sense. There is a risk and reward that comes with every offensive maneuver in the game, and you have to find an equal balance between the two in order to survive.

I have already sunk numerous hours into the demo of the game and I know that I have barely scratched the surface. There appear to be a ton of missions to this game and the collection of items (and possessions) that I am amassing (and sacrificing) is absolutely huge. When you add that to the fact that the experience can be played online with a friend, which could give it some serious legs in terms of replay value. This is shaping up to be an absolutely epic experience for Sony’s handheld. We’ll find out just how epic it is when the game launches next week.

Soul Sacrifice will be available exclusively for the PlayStation Vita on April 30, 2013 and we will have our full review of the game here on the site next week.