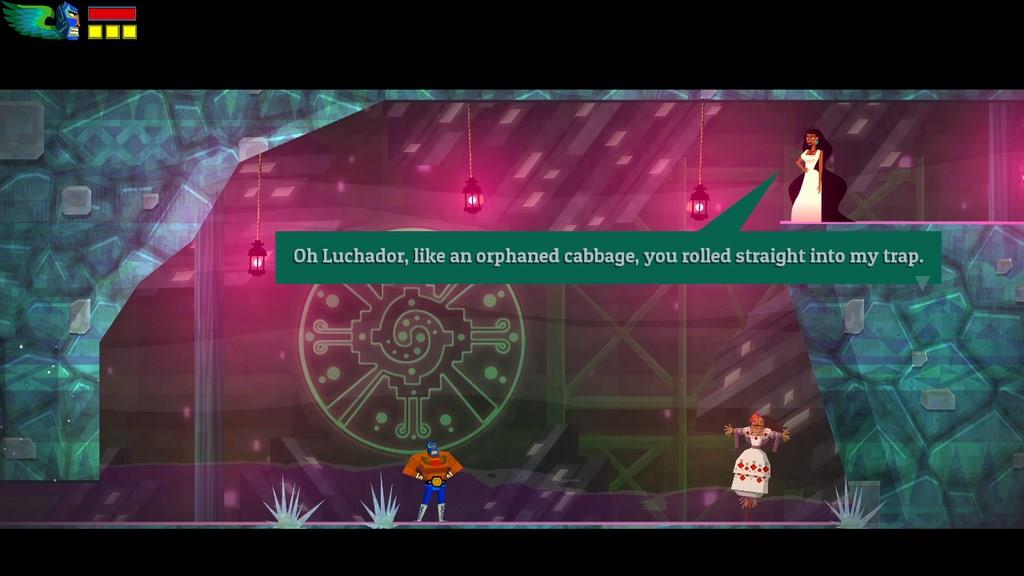 Written by Jeremy Duff on 4/9/2013 for PS3   Vita
More On: Guacamelee!
Drinkbox Studios has been on a roll in the past couple of years. The young studio, which was founded back in 2008, has released two of the most memorable titles we have seen on Sony’s PSN platform(s) in the form of the Tales from Space series. While both the PS3 and Vita installments of that series were great, it is their third title, which launches this week, that may make them a household name in the industry. Guacamelee! is a prime example of everything that is good in the gaming world and I think that you will be hard pressed, regardless of your taste in genres, to not have fun with this adventure.

You’re Juan, an agave farmer, who is thrust into the role of hero just by being in the wrong place at the right time. The evil Carlos Calaca has come back from the world of the undead to take over the world of the living, and he isn’t going to let anyone stand in his way; even you. I guess that is why he kills you within the few 10 or so minutes of the game. In order to merge the two worlds, he needs to take a bride, and the one he has his eye on just happens to be your childhood sweetheart, El Presidente’s daughter.

Instead of your life coming to an end at the hands of the Calaca, it actually just begins. When you cross over into the world of the dead, bidding your loved one(s) goodbye, you are quickly told that there is more in store for you and given the coveted mask of the luchador. With this mask, comes power, and with that power, great responsibility (or so I’ve heard). Before you know it, you are thrust back into the world of the living with one purpose: stop Calaca at all costs. 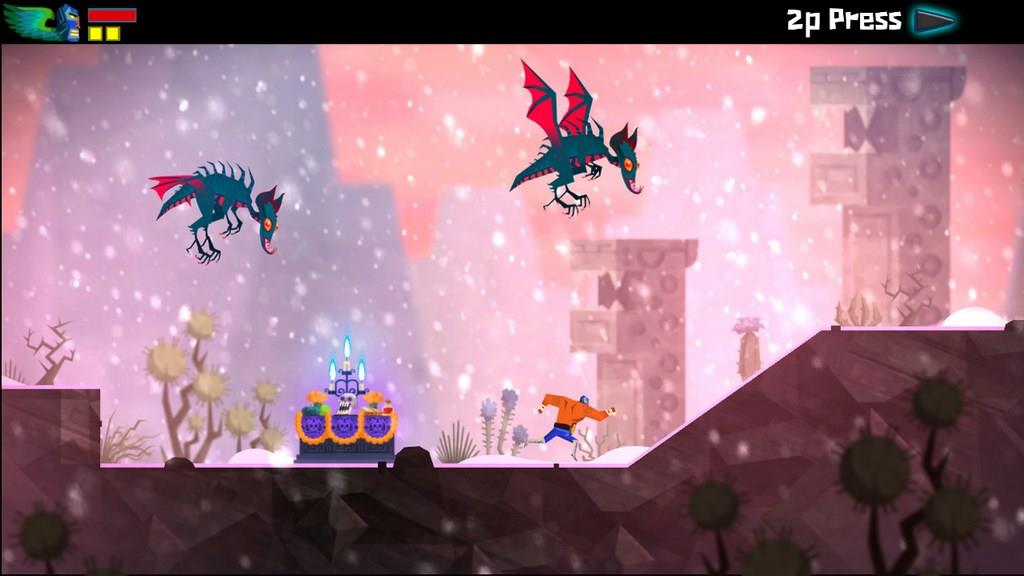 The game fits firmly into the “Metroidvania” genre of games; this means that the focus is as much on the action as it is in the exploration. You have access to an open world, which will expand even further once you master the art of traversing between the living- and dead-worlds (that comes later in the game). Although you will do a lot of backtracking, it never feels redundant because you are constantly gaining new abilities which allow you to uncover new areas within familiar ground. The game constantly throws these upgrades at you, both through discovering and destroying Chozo statues (sound familiar, Metroid fans?) and through purchases from the in-game store.

There are two areas where the game truly shines: platforming and combat. Although it will take a little bit of getting used to, once you get a feel for the combat in the game the system will open up in endless ways. Things felt a little stiff at first, but after you begin unlocking new moves with your hard-earned coinage and earning new abilities, things become very flexible and extremely enjoyable. It is a lot of fun to take on a screen filled with the undead and rack up a 200+ hit combo that involves bouncing them off of each other and the walls as well as throwing in some suplexes and pile drivers for good measure. As you take out enemies you will earn money which you can use to purchase upgrades for your character in the options screen. Early on, money is very hard to come by and you will have to be selective with your purchases; don’t fret though, because it won’t be long before you are racking up coins at a fast pace.

I have seen a lot of people praising the game for its combat system, and rightfully so, but the platforming aspect of the game shouldn’t go without its own recognition. Platforming (traversing the environment) is as important to the game as the combat. You will need to do a lot of exploration to find every nook and cranny of the world, and to do so you are going to need to do things such as double jump and extend your leaping distance. While the game will eventual bestow the abilities upon you, it doesn’t come until relatively late in the adventure; that is because they are testing you to make the most out of your existing abilities in the same manner classic platformers used to do. While you might not be able to jump directly up to a certain ledge which will lead you to a new area, perhaps you have a combo in your arsenal that will propel you high enough to reach it. 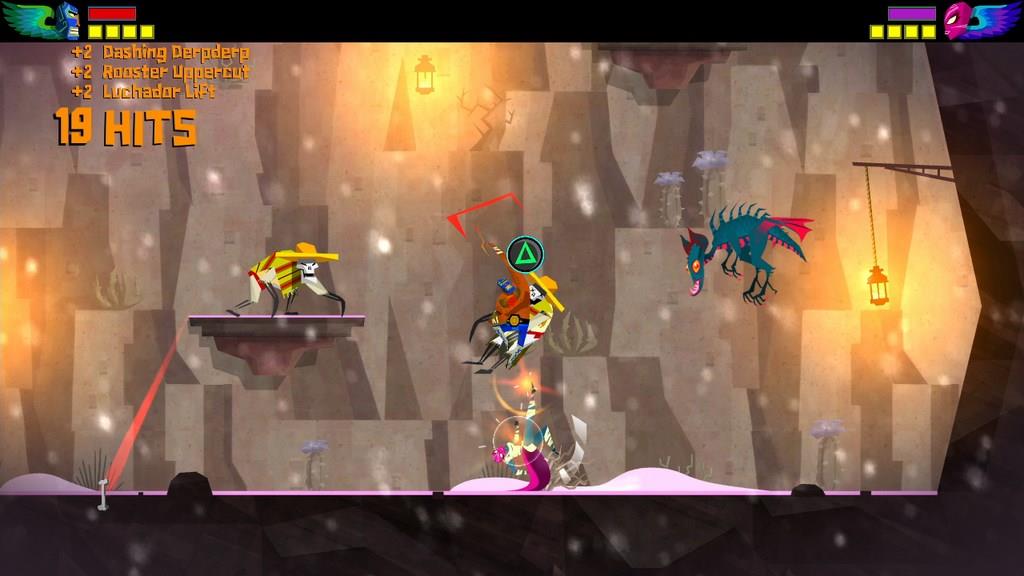 This is the type of thinking that the game constantly throws at you, and it both enhances the experience and makes you a batter player because of it. It is only after you have mastered the moves and abilities that you possess that the game gives you the the shortcuts such as double jumping. You have to prove yourself in order to get there and that is how games should be. Things will eventually become even more challenging when you harness the ability to move between the living and dead worlds at will; you do it a little bit early on through the use of portals scattered throughout the land, but eventually you will be able to do so at will. They put this to great use in the later sections of the game with some clever platforming puzzles as well as using it to spice up the combat system quite a bit.

I would like to personally commend the development team for the manner in which they have approached the subject of the Mexican luchador and lucha libre in general. This isn’t, in any way, a serious story and while the game takes a heavily comedic approach to the topic, it does so with a reverence and respect that never crosses the line as being offensive. It would have been very easy for them to do that, to turn the subject matter into something farcical and take cheap shots with some easy ethnic jokes and references. Instead they have found a way to both make you laugh and give a little insight on the tradition behind the sport behind lucha libre, which goes a long way in terms of making the adventure even more enjoyable.

This reverence for the material comes both in the content and in the game’s presentation. Guacamelee! is incredibly colorful and is a joy to both see in motion and hear. The game uses a heavily inspired, Mexican (often Mariachi) themed soundtrack and bright visuals that are colorful and full of character. The game looks great on both platforms, but I thought that the Vita’s beautiful OLED screen gives it that extra “umph”. Either way, it is pleasant on both your eyes and ears. 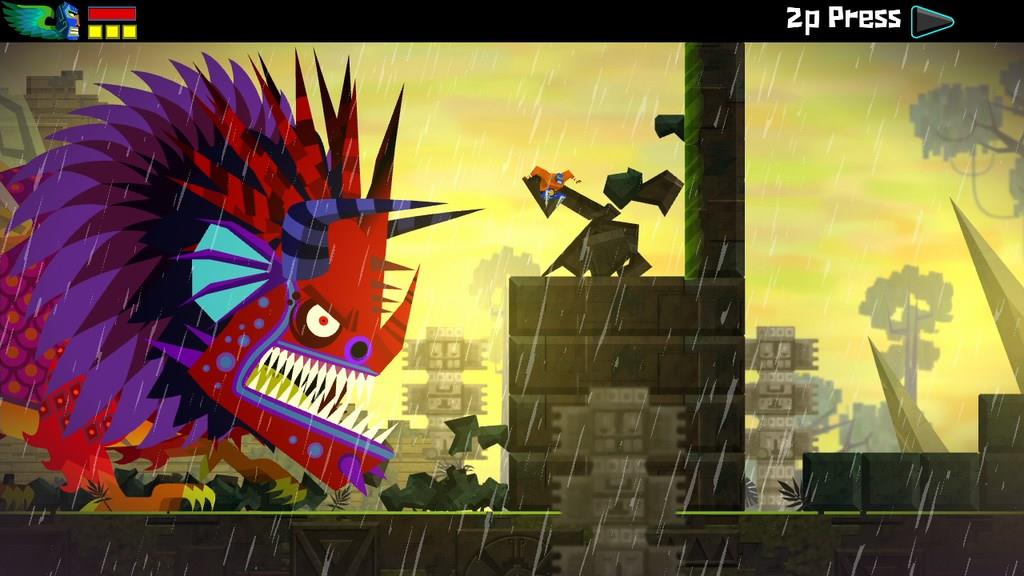 There are some areas of the game that could use some improvement. First off, the in-game store that allows you to unlock new abilities is incredibly barren. It doesn’t really take you long to unlock all of the abilities Juan has access to in this area; you’ll spend most of your time and money purchasing additional heart and skull pieces which can extend both your stamina and health bars in the game. Your more important abilities are earned by seeking out Chozo statues scattered throughout the world. The experience might have been a little better had we been given the ability to enhance or improve those abilities with upgrades in the store.

Also, the length does leave a little bit to be desired, but it is in a positive way. The adventure will only take you about 6-8 hours your first run through, depending on how thorough you want to be. There are a variety of side missions and extra areas that you can explore at your own will. It feels complete, not like you are “shortened” on the overall experience, but it just plays so well that you don’t want it to end. Thankfully, the unlockable hard mode and cooperative option available on the PS3 do alleviate this a bit. In the end however, you will want more of this world (and that’s a good thing). 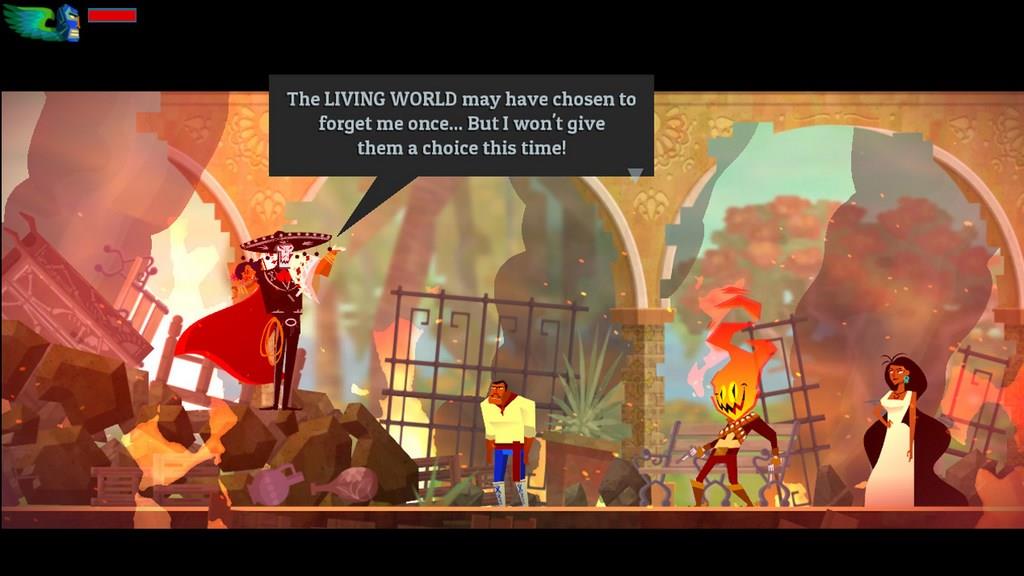 The game is virtually identical on the PlayStation 3 and the Vita, with the only differences lying in some slight control variations and the late of cooperative play on the go. The multiplayer works really well on the console, but it really doesn’t bring much to the experience. Because of that, it isn’t something that is sorely missed on the portable end. Thankfully, you don’t have to choose between the two as the game has Cross Buy support, which means a single purchase allows you to download it to both systems; plus, your save progress can be transferred between the two with the simple button press in the options. Regardless of which platform you favor, you are going to get an  enjoyable experience.

Whatever you do, don’t overlook Guacamelee! Drinkbox Studios has proven once again that they know how to make a pint-sized gaming meal that will sooth even a big gaming-appetite. Despite the smaller, digital distribution scale of the project, the impact the game has is huge and few games, even on the retail level, are as satisfying as this adventure. While I may have completed the game (albeit, not at 100%) in just about seven hours, it was seven of the most enjoyable hours I have spent gaming in recent memory. Plus, the adventure begs to be played again, and that will be after I go back and wrap things up for 100% completion on the first save. This $15 will go along way, regardless of your console of choice.
Guacamelee is easily one of the best titles available on the PlayStation Network. It has a great mix of action and exploration with rock-solid gameplay to back it all up. The adventure is a little on the short side, but it begs to be played again and again. Plus, things get even more enjoyable when you take a long a friend on the PS3. Definitely check this one out!