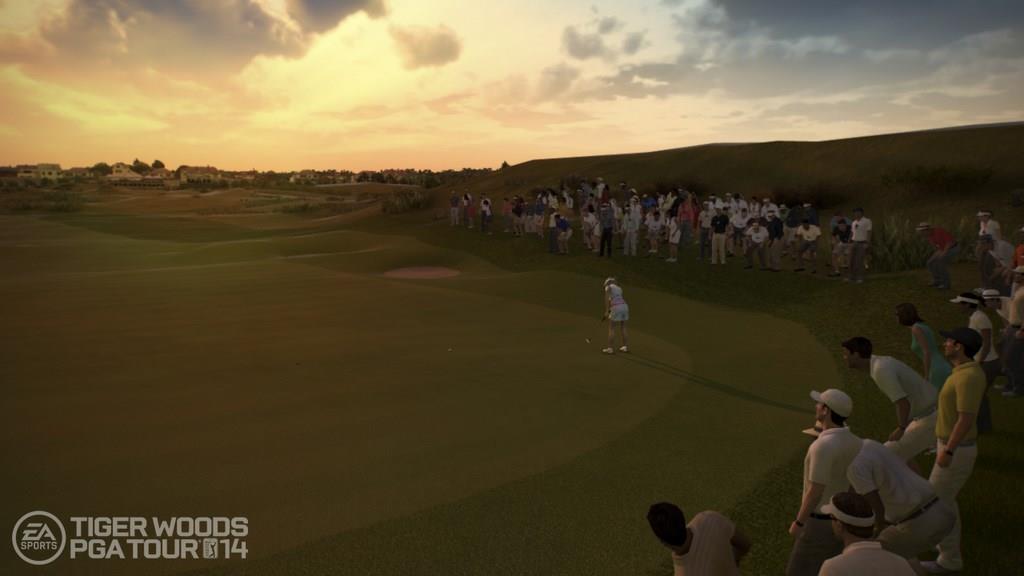 Written by Sean Cahill on 3/26/2013 for 360
More On: Tiger Woods PGA Tour 14
Here in Ohio, golf is usually in the air about this time of the year.  Of course, the weather here in the Great Lakes region is completely and utterly unpredictable, forcing the start of golf season to be later than normal.  For avid golfers like myself this can make one stir crazy .  Fortunately, golfers who are also gamers can get their golf fix from EA Sports and Tiburon with Tiger Woods PGA Tour 14.

Diving right into the gameplay, Tiburon opted to build upon the rework of the swing mechanics in the game that was appropriately called Total Swing Control.  The main addition to this year's title is the inclusion of swing styles, meaning that each golfer has a specific style that he or she follows, such as Power or Control.  When creating a custom golfer, this option will dictate various parts of each shot, such as the size of the accuracy ring or how far a player can hit the ball.  It's a very simple addition, but there is nothing wrong with this as Total Swing Control was excellent in last year's title and remains the same this year.

One aspect of the game that has caught my attention is the environment and how much it has changed to provide a further accurate experience.  Time of day can be altered, or even played in real-time, and this includes night golf.  My first round with TW 14 was a round of night golf at Pebble Beach, and while it can be slightly difficult to tell the contour of greens and fairways, it's a very odd yet enjoyable addition to the franchise.  Of course, it isn't just night golfing that is being pushed as the changing of the times throughout a round means getting to see an early sunrise if playing in the morning hours, or the shadows changing as the Sun drops below the horizon if playing an afternoon or evening round.  In career mode, this will be dictated for the player depending on their position.  After all, it only makes sense to have the Sun practically disappearing on the 18th hole of Augusta National with the Green Jacket on the line.

Beyond the minor changes to the gameplay and the beautiful additions to the environment surrounding golfers, there are a couple of issues that I experienced.  While I absolutely love the stoic Jim Nantz and incredibly unique David Feherty for commentary, sometimes Nantz's comments seem to suffer from sounding like a robot, while Feherty comes off as very smooth and easy to listen to, especially with his dry humor and ability to needle a player when a bad shot has been made.  Beyond this, there were a couple of glitches with commentary in which voices seemed to have to catch up and ended up going over the top of one another.  This was a rare occurrence, but still happened at least once or twice per session.  These issues aside, the gameplay experience is still top notch. 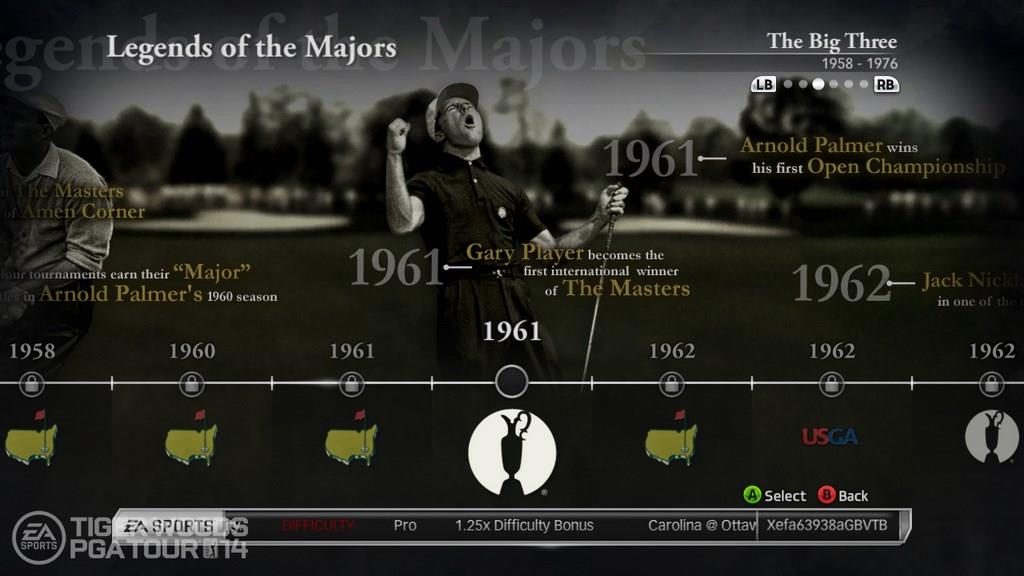 For the first time in any Tiger Woods PGA Tour game, all four majors are now truly available to play in the game.  In the past, there have been licensing issues to deal with, primarily for The Masters and the The Open Championship (otherwise known as The British Open).  EA Sports has taken care of these issues, making this the first golf title that will make going through a career mode feel like a real PGA Tour season.  Throughout the many seasons a player can enjoy in career mode, the courses that host the four major championships will rotate, though the opening season will be missing this year's host courses for the United States Open, Merion Golf Club, and The Open Championship, Muirfield Golf Club, though the Muirfield from Dublin, Ohio, makes an appearance this year as it is the host of the President's Cup at the end of the season.  Joining Muirfield Country Club on the list of new courses available on-disc are Royal Troon GC, Mission Hills GC, Oak Hill CC, and TPC Louisana.  A sixth new course, Colonial Country Club, is available via DLC, along with 21 other courses that can be purchased either individually or in groups.

Career mode has remained largely in tact from the past couple of versions, but some slight changes that I felt were much needed have been implemented.  In my review from last year, I had two major issues with career mode:  The Photo Game Face option was getting less accurate with rendering and non-essential equipment (shirts, hats, shoes,etc.) needed to stop giving players boosts to stats.  I am happy to say that both of my concerns have been addressed in TW 2014.  Photo Game Face has returned to the accuracy that made me happy up until the 2012 version of the title.  I felt that many of the expressions that the custom golfers showed were very artificial in the past two versions, and that TW '09 was still the best representation of Photo Game Face.  TW 2014 has recaptured that, as my custom character in career mode is almost a perfect doppelganger for my real self.  In regards to my other issue, clothing still must be earned as a player progresses throughout the game, but no longer will clothing or any non-essential accessory give a boost to a player's stats.  In the past few versions, I've felt that career mode was hampered a bit simply because not taking advantage of these boosts was foolish, especially when playing online.  Yes, this issue is completely a cosmetic one, but the idea behind a custom player is that it is yours to control in every way, right down to how he or she expresses themselves in the game itself.  Removing the attribute boosts is the correct thing to do, and I applaud EA Sports and Tiburon for doing just that. 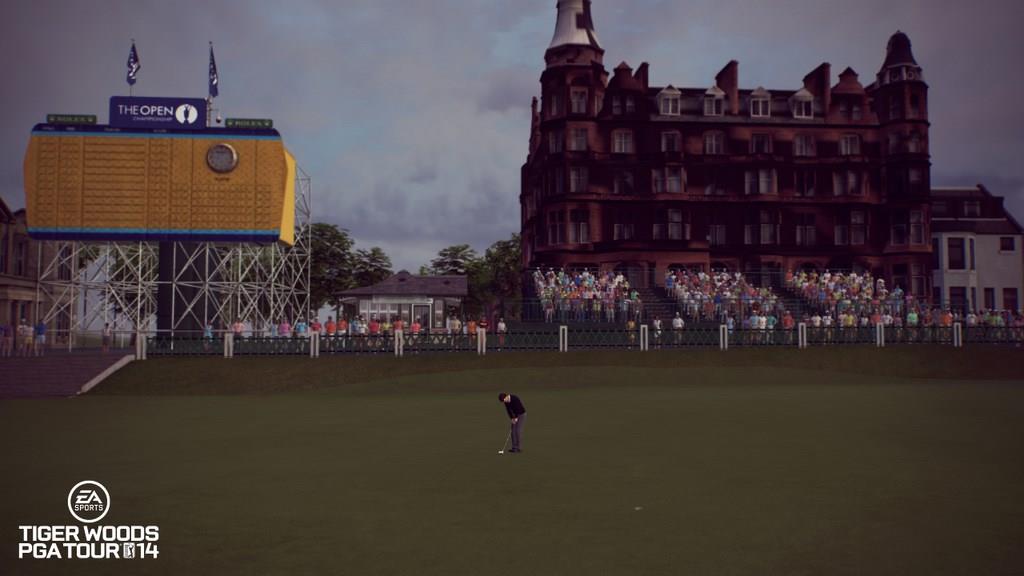 Sadly, though, I have a major gripe with a new addition to career mode and how painfully easy it can be to boost a character to maximum level.  The great thing about Tiger Woods games has always been the progress that a player has to make on their own in building a character up to maximum level, just as if one was playing an RPG from years past.  Now, with the addition of the Coin Shop, players can purchase coins that can simply be turned into XP and boost their player to maximum for as little as thirty dollars if they are an EA Season Ticket owner.  In the three days leading up to the publishing of this review, playing online showed that many players taking advantage of the early download for owning that Season Ticket are already sporting a maximum attribute player, and that shouldn't happen.  I had my complaints last year and they were answered.  This year, I'm going to do the same:  Please eliminate this next year.  It's unnecessary and takes away the fun of going through the early times of a career to build up a custom golfer.

There are some more additions to this year for players to enjoy that truly raise this title above past versions.  In last year's title, players were introduced to covering the entire history of Tiger Woods, starting out as a two year old on national television chipping balls into a net.  I love the creativity that Tiburon has brought over the past couple of years, and they have stepped up again.  This year features a Legends of the Majors mode that covers the history of golf itself.  Playing in the earliest years of the game will render old time images that appear the game was shot through an ancient camera, adding to the historical feel of the mode itself.  There is a lot to take on and nine legends to take out, including Bobby Jones, Jack Nicklaus, and Tiger's fellow cover star, Arnold Palmer. 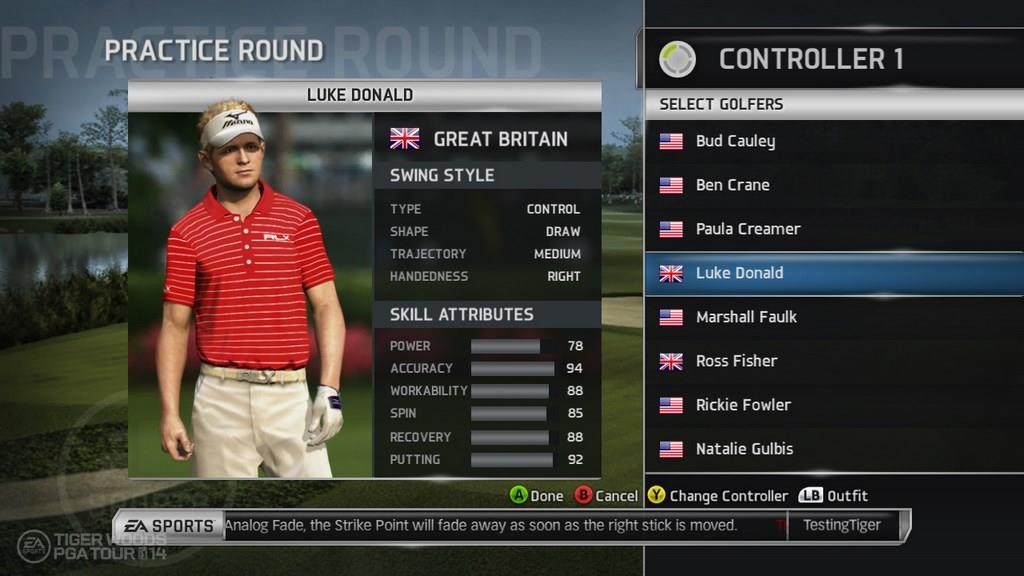 Country Clubs were a nice addition in last year's version, though I felt as though they were a bit under-utilized.  This year, a new focus has been placed on Country Clubs, raising the maximum amount of players in a CC from 25 to 100 and including a dedicated club chat, meaning that no matter where in the game you are, you can chat with your fellow members about anything, whether it's about the game itself, this week's PGA Tour event, etc.  Club stats and leaderboards have been added in as well as loyalty bonuses to help truly push the need to be a part of a great Country Club in-game.

Online has received a great upgrade with the inclusion of Connected Tournaments.  Connected Tournaments allow a player to pick any number of challenges or tournaments that have been posted up by EA as a means to earn experience, coins, and points for your Country Club.  The beauty of this online mode is that up to 24 players can be playing in the same group, virtually of course, which means hearing other players as they attempt the same challenges that you are playing and seeing their various shot arcs and putt paths.  It's a very unique twist to an online mode that has gained in strength over the last few titles.  The regular tournaments are still there, of course, if connected tournaments aren't your thing.  Playing with friends over Xbox Live or the Playstation Network is still easy as can be, and can be competitive or friendly, depending on your choices.

Wrapping it all up, I feel as though plenty of improvements have been made to this year's title to warrant it as a good pickup for the gamer wanting his or her fix for golf.  The new courses are always welcomed and have increased from 16 to 20 on-disc with plenty of purchasing options for more courses through DLC.  Even with the minor issues experienced with somewhat robotic commentary and the occasional contour issue on greens and fairways when playing in the morning, evening, or night times, Tiger Woods PGA Tour 14 is ready for contention in all of the majors.
With a robust and deep career mode, connected tournaments, and the new Legends of the Majors challenges, Tiburon has given fans of the Tiger Woods PGA Tour series what they wanted: Necessary changes to Total Swing Control, new courses, and plenty of replay value.