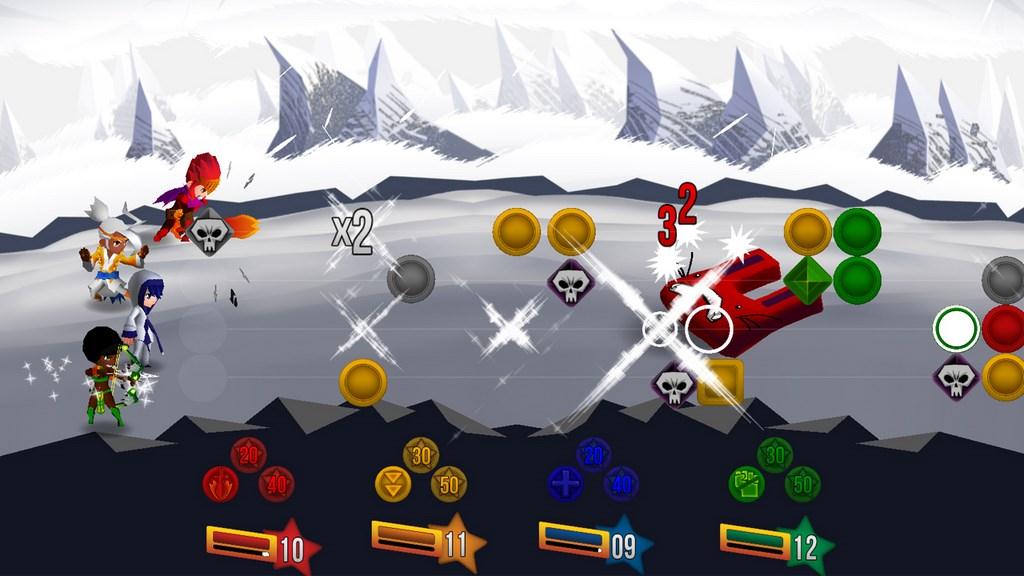 Written by Cyril Lachel on 5/29/2013 for PC
More On: Dungeon Hearts
Puzzle Quest may not have been the first game to offer players a chance to match three objects, but it was the first to prove that this style of puzzle solving could work when mashed-up with a role-playing game. Dungeon Hearts doesn't stray too far away from the match-three formula, but it does make a convincing argument that not every puzzle/RPG has to be a variation of Bejeweled.

Dungeon Hearts involves four Final Fantasy-style adventurers on a quest to battle giant monsters and save the world. Naturally, you do this by matching colored shapes. As a battle starts, players will be asked to move the various shapes around a conveyer belt. On top of the colored shapes, the moving platform also contains the enemy's attacks. The object is to keep matching like colors and successfully counter every attack.

Of course, that's easier said than done.  Despite its simple look, you'll quickly realize that Dungeon Hearts has more going on than meets the eyes. For starters, the game throws unmovable square blocks at our heroes, as well as completely useless grey blocks. Even the enemy's attacks change over the course of the game, offering a number of magic abilities that clutter the conveyer belt. Needless to say, there's a lot going on at any one time.

Things get even trickier when a character falls in battle. Suddenly you'll be forced to break useless blocks in order to match up the colored shapes. Although frustrating, this is a great way to convey the shift in momentum. Matches become increasingly difficult with each fallen comrade. And then, when the final hero has fallen, the game is over and you start over from the beginning.

After each enemy is successfully defeated, the four heroes are given a few seconds to match star-shapes to gain experience, learn new spells and level up. The various characters will learn different magic spells over the course of the adventure, offering players stronger attacks and a way to heal injured fighters. What's more, this is also a good way to slow down and even clear especially frustrating puzzles.

Missing are the story hooks that kept me addicted to the original Puzzle Quest. Even when the story wasn't memorable, I always appreciated that it was there to make me feel like part of this world. I was always progressing towards something in Puzzle Quest, and that, along with the addictive gameplay, is what kept me going for dozens of hours. Unfortunately, there isn't much of a narrative to hold on to in Dungeon Hearts. There's a brief cinema at the start, but after that it's a never-ending grind of arranging colored-shapes to defeat monsters. 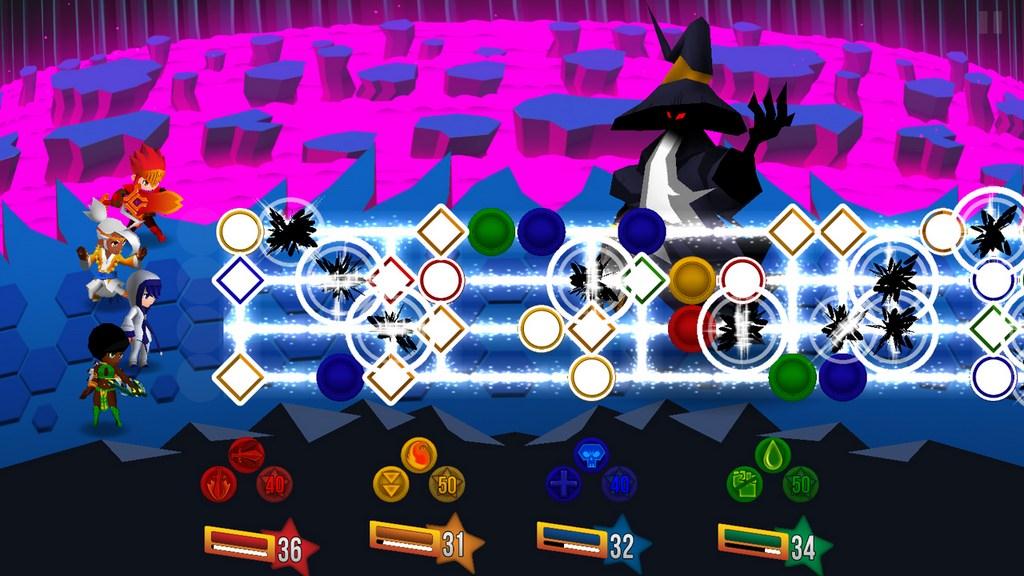 Sadly, the nonexistent story is not the only thing that missed the mark in Dungeon Hearts. The way the conveyer belt moves the shapes around can often get in the way of precise placement. I ran into all types of annoying problems, from picking up the wrong shape to not being able to place objects where I want them. Some of this may just be the woes of manipulating moving objects, but I can't help but feel like this would be easier to play on a touch screen device.

Dungeon Hearts is full of beastly monsters to battle, ranging from giant rats to fire-breathing dragons. You'll see a lot of familiar fantasy faces, each with their own style of attack. While not every enemy is a showstopper, I generally enjoyed the unique art style and the way everything moves. Of course, there isn't much time to pay attention to what's happening away from the conveyer belt of shapes and colors.

As a three dollar game, Dungeon Hearts is easy to recommend. It's the beginning of a very intriguing idea that could be fleshed out into something truly great. Unfortunately, this game stops short of its full potential.  It may lack the replay value of Puzzle Quest, but Dungeon Hearts is still a worthwhile variation on the match-three formula.
Dungeon Hearts is a perfectly fun puzzle mash-up that is marred by inconsistent difficulty and lack of a narrative. While the actual combat is fun, it's a shame that players are forced to start over every time the game ends. Even with its problems, there are enough good ideas here to make it worth the low retail price.