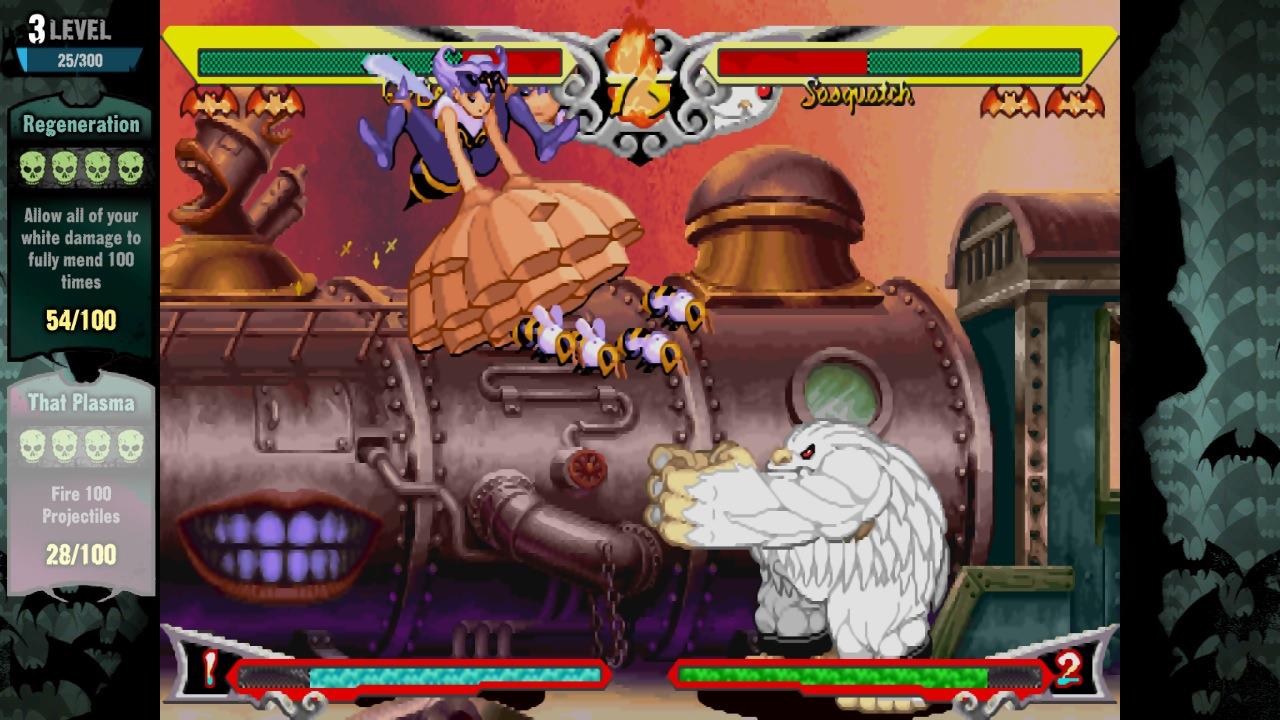 Written by Cyril Lachel on 4/10/2013 for PS3
More On: Darkstalkers Resurrection
For as much as I love throwing one of Ryu's fireballs and getting dizzy with Chun Li's spinning bird kick, the Street Fighter cast is a fairly pedestrian group.   Outside of a Brazilian monster named Blanka and Dhalsim's stretchy arms, the World Warriors aren't all that interesting as video game characters.  For anybody who has ever complained that Guile and Ken aren't flashy enough, I give you the DarkStalkers trilogy.

Instead of offering only one or two interesting novelty characters, Capcom decided to go the opposite direction with DarkStalkers.  It's a series built around fighting characters based on classic horror movies.  From vampires to werewolves to mummies, this mid-1990s trilogy resurrects just about every type of monster for a one-on-one match you have to see to believe.

After being mostly ignored for the last fifteen years, Felicia, Q-Bee, Victor von Gerdenheim and Demitri Maximoff are back on the PlayStation 3 and Xbox 360.  DarkStalkers Resurrection is an HD compilation featuring two of the three installments -- Night Warriors: DarkStalkers' Revenge and DarkStalkers 3.   The result is a gorgeous package that wonderfully highlights what makes this series so unique.

The key to this franchise's success is the characters, each of which is based on a classic horror movie or legend.  You get Anakaris (mummy), Lilith (succubus), Anita (witch), Jon Talbain (werewolf), Victor (Frankenstein's monster) and even Sasquatch (bigfoot).  And that's just the beginning of a roster that includes vampires, fish monsters, a cat demon and a machine gun-toting girl who resembles Little Red Riding Hood.

DarkStalkers features the very best of Capcom's sprite-based artwork.  Forget puny fireballs, the moves in DarkStalkers are large and often take up large chunks of the screen.  The moves aren't just large, but also visually arresting.  Even spectators won't be able to take their eyes off of the detailed special moves and gorgeous backgrounds.

Fans of Capcom's Street Fighter series will feel right at home with DarkStarlkers Resurrection, even with the over-the-top characters.  The gameplay is virtually unchanged, with fireballs, uppercuts and spinning cuts being pulled off with the usual joystick commands.  And if that isn't enough for you, both DarkStalkers sequels sport the familiar six-button layout -- three punch, three kick.  There are even a few characters that neatly match up with a Street Fighter counterpart.

As a compilation, DarkStalkers Resurrection feels a lot like last year's Marvel vs. Capcom Origins.  On top of the usual fighting game modes, this arcade game collection sports a single-player mode that has you earning points in order to unlock collectibles.  You earn the points by pulling off a certain amount of special moves, completing a multi-hit combo, seeing all of the endings and other noteworthy accomplishments.  This will help keep players motivated to try out all of the characters and see every special move.

There are also an impressive amount of visual options, allowing players to make the game look exactly how they want.  The game uses an ugly filter by default, but it only takes a second to turn that off, fiddle with the scan lines and toggle the other options.  While it would have been nice to see brand new HD artwork (a la Super Street Fighter II Turbo HD Remix), the original sprites still look amazing. 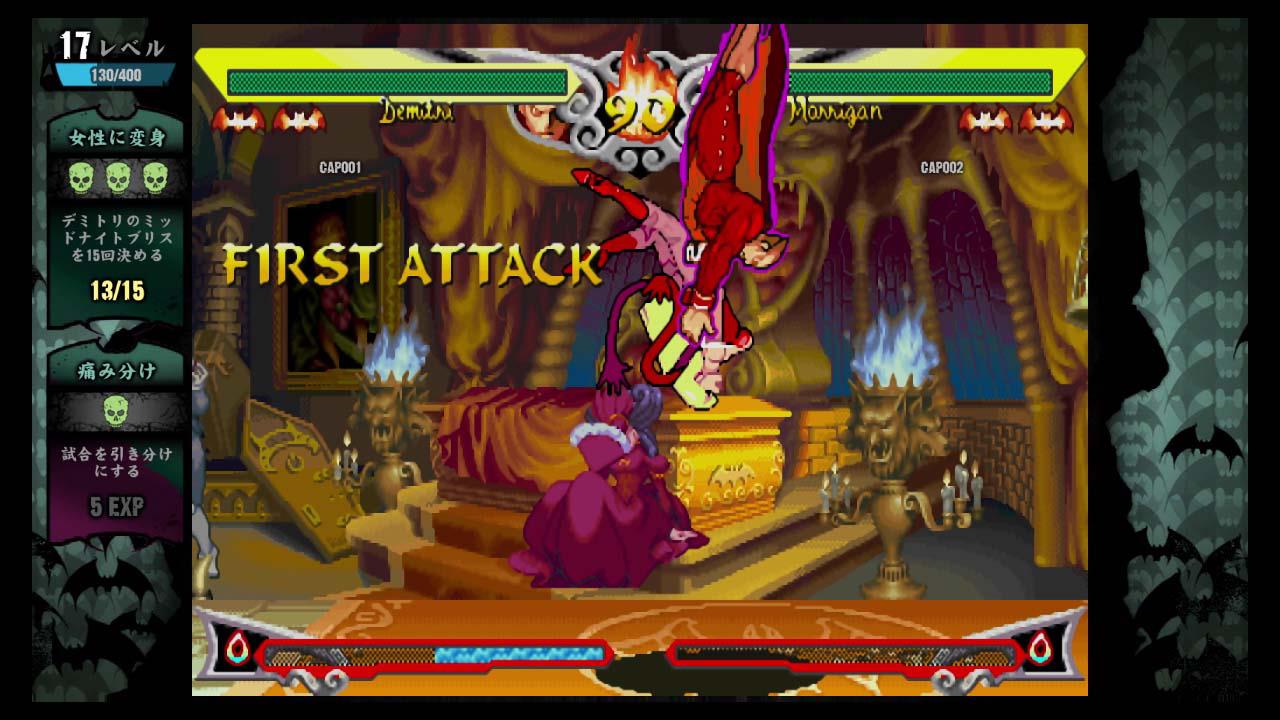 With the exception of ports on the Sega Saturn and Sony PlayStation, this is the first time in well over a decade that either of these two DarkStalkers sequels has been released on a home console.  This is also the first time either of these two games has featured online multiplayer, making this a real treat for competitive fighting game fans.  The various multiplayer options aren't revolutionary by any means, but sometimes just being able to connect online is good enough.

Despite the game's great presentation and winning emulation, DarkStalkers Resurrection does have a couple noticeable oversights.  DarkStalkers 3, for example, is missing a number of characters featured in other ports.  And while we're on the subject of missing things, where is the original 1994 DarkStalkers?  Thankfully there is more than enough great content to make most players forget about omissions.

DarkStalkers Resurrection manages to still feel fresh, even though both of these sequels are more than 15 years old.  Both Night Warriors and DarkStalkers 3 offer players a lot of hidden depth to explore, as well as an amazing presentation that you won't be able to take your eyes off of.  The unlockables may be lacking and I'm a little miffed that the original 1994 game isn't here, but this is yet another quality compilation from Capcom.  I can only hope that this is the prelude for DarkStalkers 4.
DarkStalkers Resurrection is yet another high-quality fighting game collection from Capcom, a company that has gotten real good at this sort of thing. With an online mode and plenty of goodies to unlock, this DarkStalkers compilation is easy to embrace with open arms. Don't be intimidated by the chaotic action, the two games found in DarkStalkers Resurrection are well worth the asking price.