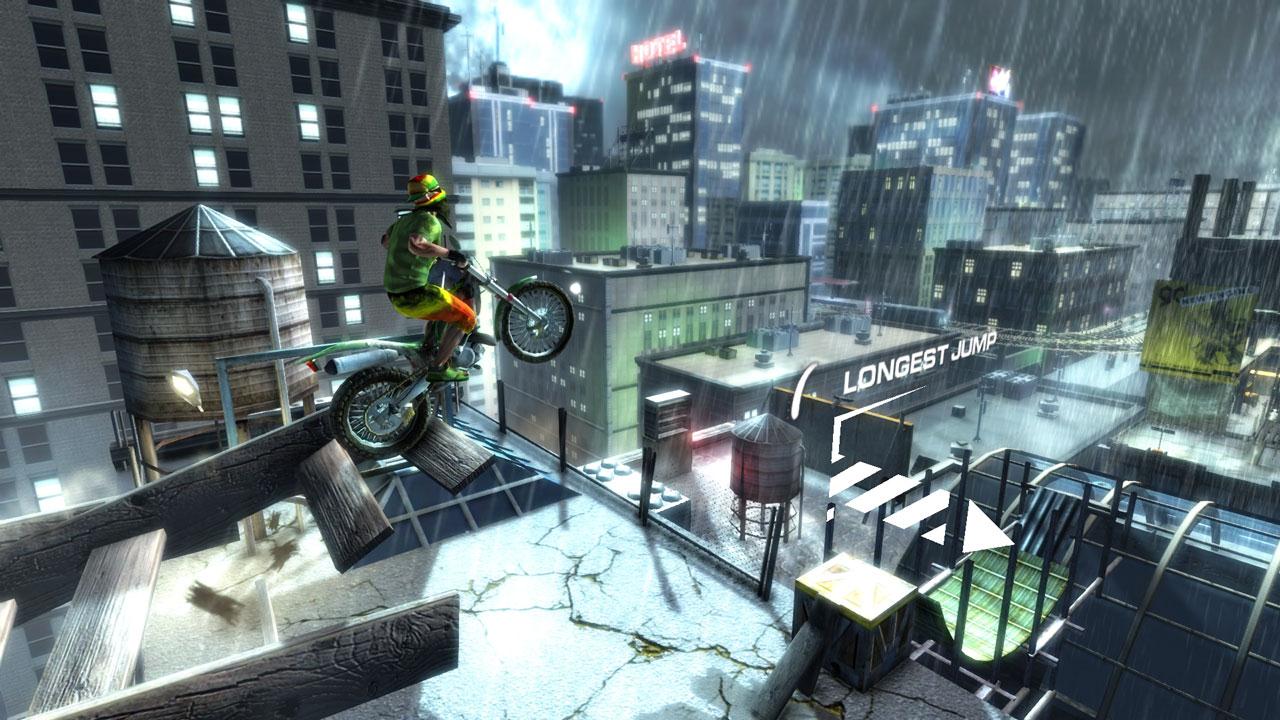 Written by Jeremy Duff on 2/19/2013 for PS3
More On: Urban Trial Freestyle
One of my favorite games of all time, one that I can still play endlessly to this day, is Nintendo’s classic Excitebike. It is a simple and addictive formula that just keeps you coming back for more and more. It is really a simple concept: go, stop, and balance... that is all there is to it. Yet those three mechanics, combined with some great course designs, have crafted a gaming experience that has lasted years. Scratch that, decades!

It is no surprise that other companies are starting to revisit this simple premise and bring it to the modern era. Red Lynx has done so with the Trials series on the Xbox 360 and PC and now Tate Multimedia is bring their own take to Sony’s PlayStation Network. Urban Trial Freestyle will challenge not only your skill and prowess with the virtual motorbike also your ability to remain calm under pressure. I have spent the last week kicking up dirt with both the PlayStation 3 and Vita versions of the game and have found myself wishing that there was more to be had on this adventure.

Let me clarify that this review is specifically for the PlayStation 3 version of the game. If you have played anything like Trials HD or Excitebike, then you know what expect here. This isn’t about complicated control schemes or intricate aerial maneuvers; you have to get from point A to point B while remaining upright and catching huge air along the way. Tricks don’t get any deeper than popping wheelies or pulling off flips in the air; you won’t be doing handstands on the handlebars or pulling superman-style releases by your own volition. There are some canned animations depicting these tricks in the game, but they are triggered automatically depending on the amount of air that you get off of the various ramps. It sounds simple and it really is, but it is also amazingly fun too.

What sets this game apart from the competition is the variety and activity in its environment. Most games simply put you to the test on complicated tracks; Urban Trial Freestyle does that but also throws in a ton of environmental elements into the equation to throw things off. You have to keep and eye out for speeding trains, collapsing buildings and debris, as well as the occasional, tumbling car or truck. Plus you have bystanders who throw things at you which can knock you off of your bike. These are more than just hazardous events meant to throw you off of your course, but rather opportunities for you to add a little style or flair to your run(s).That dump truck that drops its load right in front of you on the freeway also provides a great opportunity to catch some air, plus the dust it stirs up adds to the atmosphere. The world around you is insanely busy. We’re talking about police helicopters flying by, cars colliding inches from your rider, and construction materials rolling across the ground and collapsing at every second of your race.

The game mixes things up from the norm by putting you in two distinct type of races. You have speed runs and trick runs, each of which are scored on a 5-star scale. You will need to collect stars in order to unlock other courses and environments. Speed runs are exactly like they sound: timed sprints from one point to the next. The quicker you complete the course, the more stars that you are granted. The trick runs are a bit different and what is truly the heart and soul of this game. 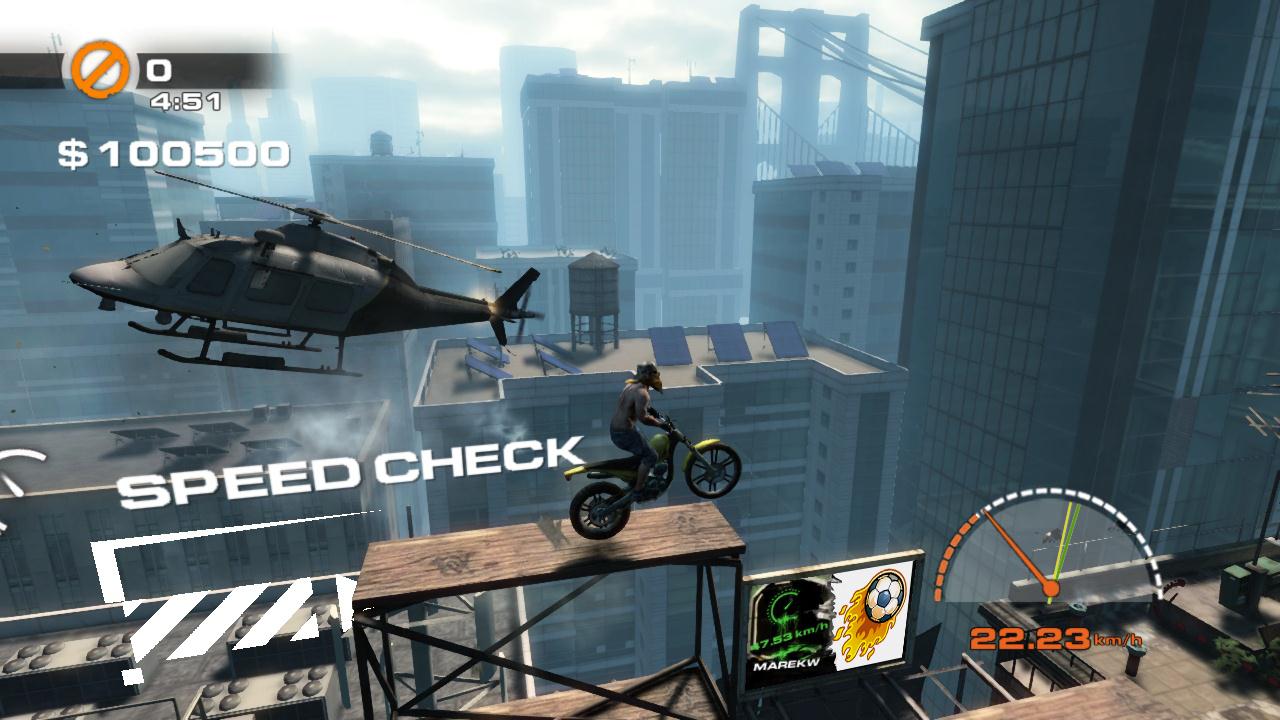 There are five measurable tricks / stunts in the game, and multiple stunts may appear in a course. You will encounter marked areas of the different courses that will ask you to set a record of the highest jump, longest jump, biggest flip, highest speed, or a measure of precise aiming. It is all about the approach in each situation so knowing your track and learning how to get the best out of each situation is something that you will need to master. In addition to learning the skills necessary to perform these various stunts, you will also have to tune your bike to make the best out of each situation.

All of the tracks are littered with cash, $5,000 on each stage, and you can collect it to upgrade the various parts of your bike. You can upgrade three different aspects: motor, frame, and tires. Each alteration modifies you ratings in the categories of top speed, acceleration, and handling. One bike won’t do it all here, you will need to tune your ride up prior to each course in order to make the most out of the stunt opportunities it provides. there are many times where I found myself unable to complete a course because I had to pull off a 360 flip in order to land safely on an intricately placed platform; if your handling isn’t up high enough, pulling off such a feat is impossible,. Then again, you will also need to have your speed up to par enough to get you the air you need. I found the need to tune my bike far more important here than I have an any other comparable games. You can also spend cash to customize the look of your rider, but those options are relatively limited and do not have any effect on your performance.

The best part about setting the record for a trick is that the game will then plaster your profile pick on the billboard marking that section of the course. Each one will be marked with your PSN profile’s icon and your PSN ID, staking your claim to that particular area.This is the crux of the game’s replay value and what will make or break the game in the long run. It is all about setting the high scores and as long as the public keeps playing and setting new bars, people will have a reason to come back. Once that dies off however and the leaderboards become stagnant, the game will lose its appeal. 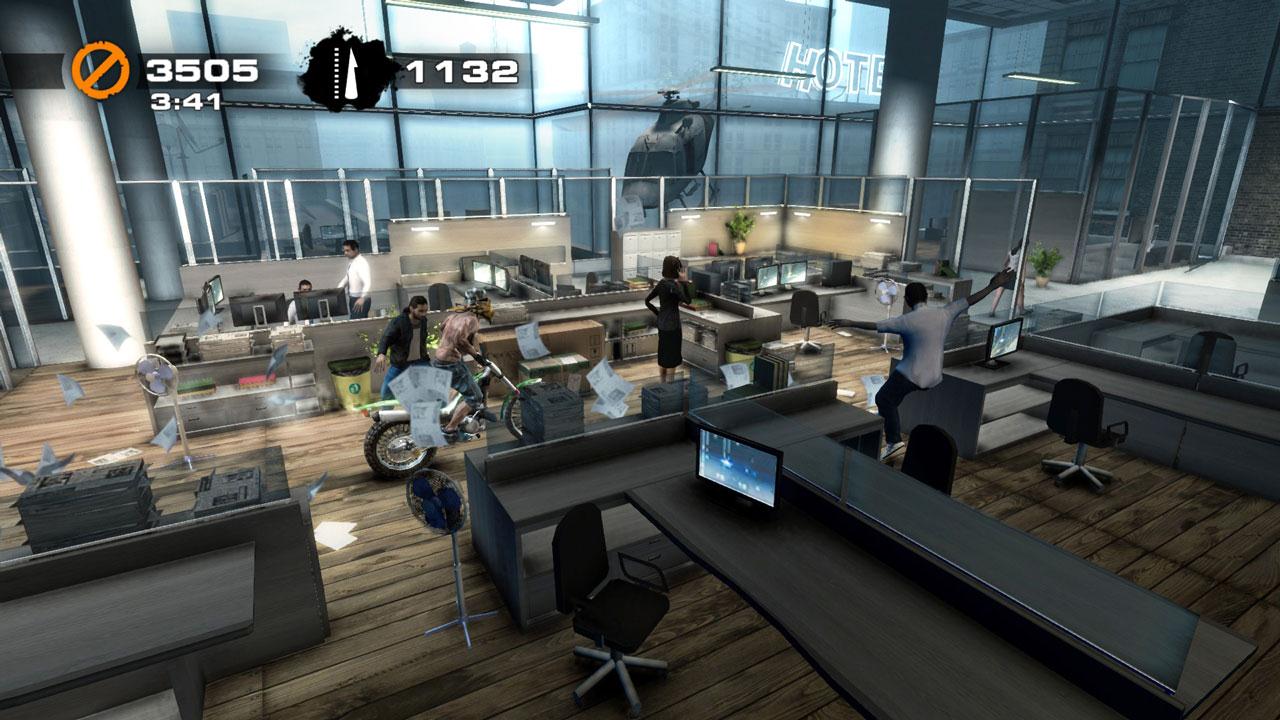 Once you have trekked through the five urban environments, you will have complete access to the game’s five different challenge stages. These are individual courses each with their own distinct task and a unique leaderboard to crown a king. One challenges you to get as far as you can on a single tank of gas while another challenges you to complete a course in the lowest amount of time while manipulating gravity. They’re simple and fun but nothing that will ultimately keep you entertained for long. They can be completed in a matter of minutes and once you have secured your place in the rankings, the only reason to ever come back is to try and increase your score.

There is really only one problem to be had with the game: lack of courses. Sure, there are more than 45 levels present in the game, but those will be knocked in a matter of hours. Games like this need an ability to generate new content, such as user-made tracks. Let the community feed itself and they will continue to eat from the troth that is your game for a long, long time. But if you give them a definite end, as this game does, they are likely to look elsewhere for food once they have had their filling. Hopefully Tate plans on introducing a track editor, or at least additional tracks, at some point in the game’s future. I am not usually one to ask for DLC, but in this case I am begging for it. Please, give me a reason to come back to this game months down the line!

Urban Trial Freestyle is a blast to play. The gameplay is spot on and the game does a good job at varying the courses through the different environments. It really does feel a lot like Red Lynx’s Trials series, and I mean that as a compliment, but it also does enough to differentiate itself from that series to give it its own legs. The big difference here is the incorporation of the environmental hazards; the world around you is a lot more interesting here than it is in comparable games. If only there was a means of creating and sharing additional tracks, then I could see myself playing this game for years to come. As it stands now though, it is a great adventure that should keep you entertained as long as its community stays interested and the leaderboards remain lively.
Urban Trial Freestyle is an awesome experience but it just doesn’t last that long. The leaderboards and track records are all that you have to keep you coming back for more after you have played through all of the courses; the longevity is going to depend on the strength of the community. The tracks are great but at the end of it all, you just want more. Hopefully additional courses and / or a track editor is on the way because I hope to have a reason to play this for a long, long time.