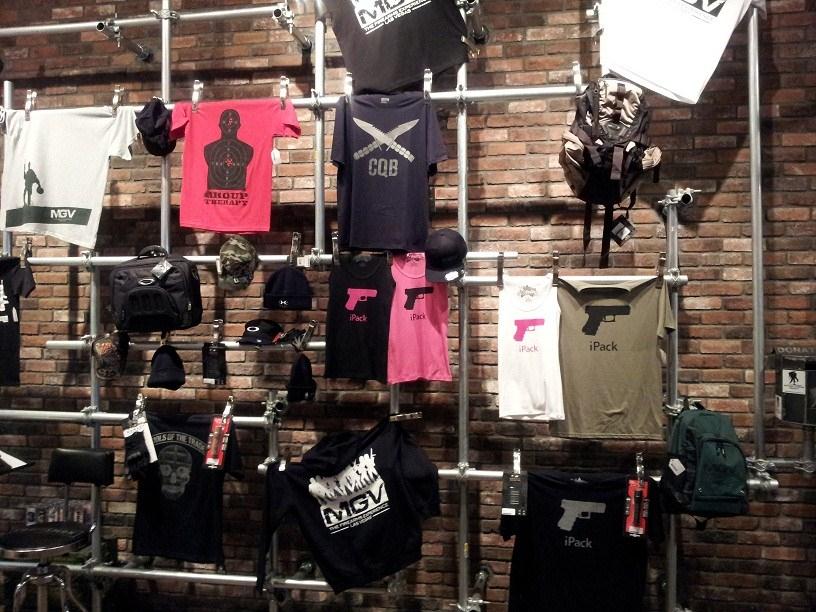 Written by Dan Keener on 1/7/2013 for 360   3DS   AV   MOB   PC   PS3   PSP   Vita   Wii   WiiU
More On: Gaming Nexus Originals
As games become more realistic, it is always interesting to see how the in-game experience actually translates to the real world.  Human nature is for us to satisfy that curiosity whether it is driving certain cars, visiting exotic places or shooting off a few rounds from an in-game weapon.  Depending on your resources, you can always visit those locations or rent that dream car.  However, getting the chance to shoot real life weapons found in first person shooters such as Call of Duty, Battlefield and Medal of Honor series is tougher to do.

Fortunately, Machine Guns Vegas (MGV) provides access to many of these in-game weapons so Sean and I scheduled a visit to take a look at the facility and the packages they offer.  Our trip started with a pick-up by the MGV party bus and a quick hop across Interstate 15 from the heart of the strip, where the MGV facility is located near the Mirage and Treasure Island resorts.  We were ushered into the main lounge area where we met our hosts for the trip, Gun Girl Lauren Volz and Range Master Lucus Thomas. 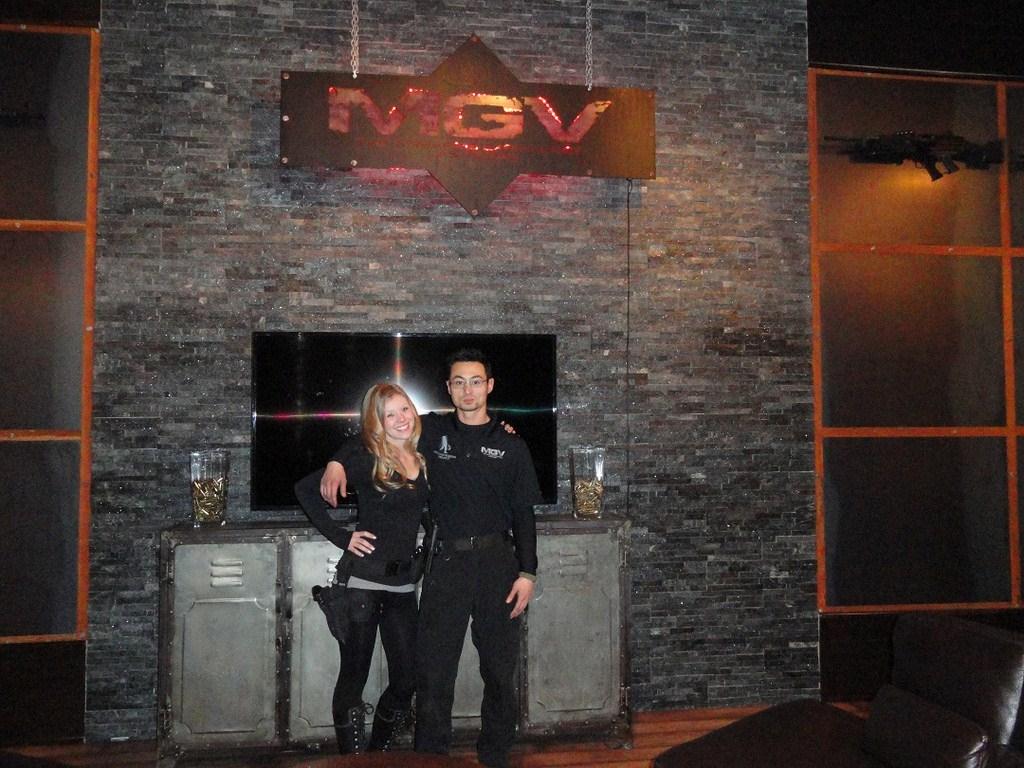 At this point on a typical trip, MGV clients would sit down with their Gun Girl and Range Master and go over the available options and decide on what shooting experience they are after.  Sean and I were there primarily to see the Gamer’s Package that MGV offers.  For $189.95, it includes 25 rounds with a M4 Carbine, 25 rounds with an AK-47, 20 rounds with a FN Scar and 20 rounds with a Beretta M9 handgun.  In addition, you get to choose four targets from a stockpile of bad guys, zombies and the ever popular Bin Laden.  Each of the four weapons from the gamer’s package can be found in multiple FPS games, including Call of Duty Black Ops (AK-47), Battlefield 2 (M4), Call of Duty: Modern Warfare 3 (FN Scar) and in almost all Battlefield games (Baretta M9.)  After spending some time with Lauren and Lucus covering the Gamer's Package and details about MGV, we headed into the range where Sean handled all of the weapons in order to provide the following impressions.

The experience in the range itself with the available weapons is incredibly unique.  Lucus, being our Range Master for the handling of the weapons, went through the process of a typical package, including the full breakdown of how he explains each weapon is to be held and fired.  The professionalism shown is very impressive, as it isn’t just the standard gun range that a client would be handed a weapon and fire away.  I was shown the proper way to grip the weapons and how every client is different.  Lucus explained that there are many clients that come in a little hesitant or even fearful of what they are doing, and then after a round of shooting, are ready to just cut loose and fire off a full magazine, practically begging for more.

The first weapon that I had the chance to handle was the M9 Beretta handgun.  Although a simple weapon in comparison to the others offered in the Gamers’ Package, the Range Masters start shooters off with this as a means to welcome a client into their full experience.  I could see someone walking into MGV and basically asking for the biggest gun right out of the gate, but Lucus gave a great explanation as to why that doesn’t happen.  In the Gamer's Package, a client works their way up mainly due to recoil.  The M9 is a great way to introduce someone to a shooting experience, especially for those who have never fired a gun.

The M4 Carbine was next on the list, which might be one of the most popular weapons in FPS games today since it shows up in almost every title in some way.  The M4 ended up being a very light weapon, especially in comparison to the guns I would hold later on in the trip.  It felt like a gun that was almost ergonomic with the way it needed to be held.  I can’t stress enough the professionalism and how it is all business inside the range itself even though it is all about having a good time.  In the video later in the article, range professionals are with shooters at all times giving pointers on efficiency and making sure that rules are followed so that clients not only have the best experience, but do not get injured.


Sean and the M4 Carbine 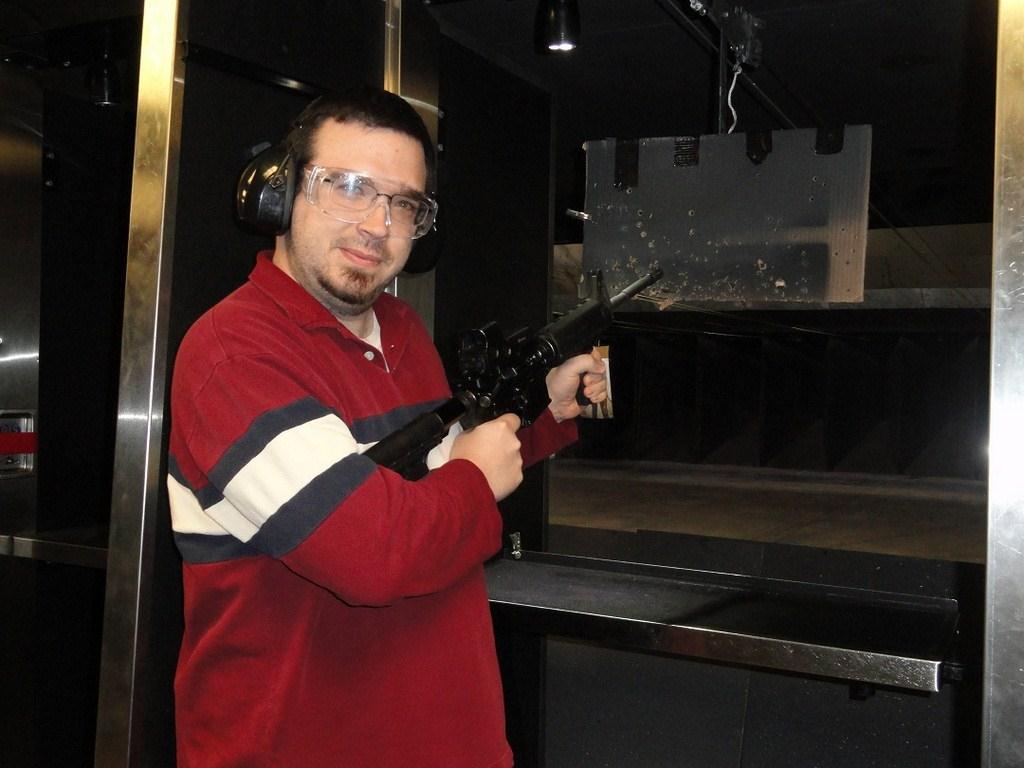 Next up was a classic AK-47, an assault rifle that almost every gamer who has ever played a FPS knows about.  This weapon, Lucus explained, is usually saved for last on the package because it has a bit of a harsh recoil.  The AK-47 was probably the heaviest of all of the weapons offered, which was a bit surprising because of the size comparison of the AK-47 and the other two assault rifles in the package itself.

After the AK-47 was the Saw, which isn’t included in the Gamers’ Package.  Lucus brought it out to show Dan and I the difference in the weapons available.  Needless to say, the Saw was a very intimidating, yet awesome weapon.  Requiring a stand to hold up the front of the gun due to the weight of it, the Saw is a belt-fed weapon that Lucus said is a favorite of clients that go to MGV.

The final weapon, and probably the most fun, was the FN Scar.  Lucus made it a point to explain that this was the best weapon to ease a patron into the harsher recoil weapons.  The Scar, while being classified an assault rifle, had very little recoil due to the design of the gun making it an incredibly fun weapon to shoot at the range.  It’s obvious that the staff at MGV knows what they are doing in all phases of the experience, from the safety explanations, range layout, order of firing weapons, and overall experience at Machine Guns Vegas. 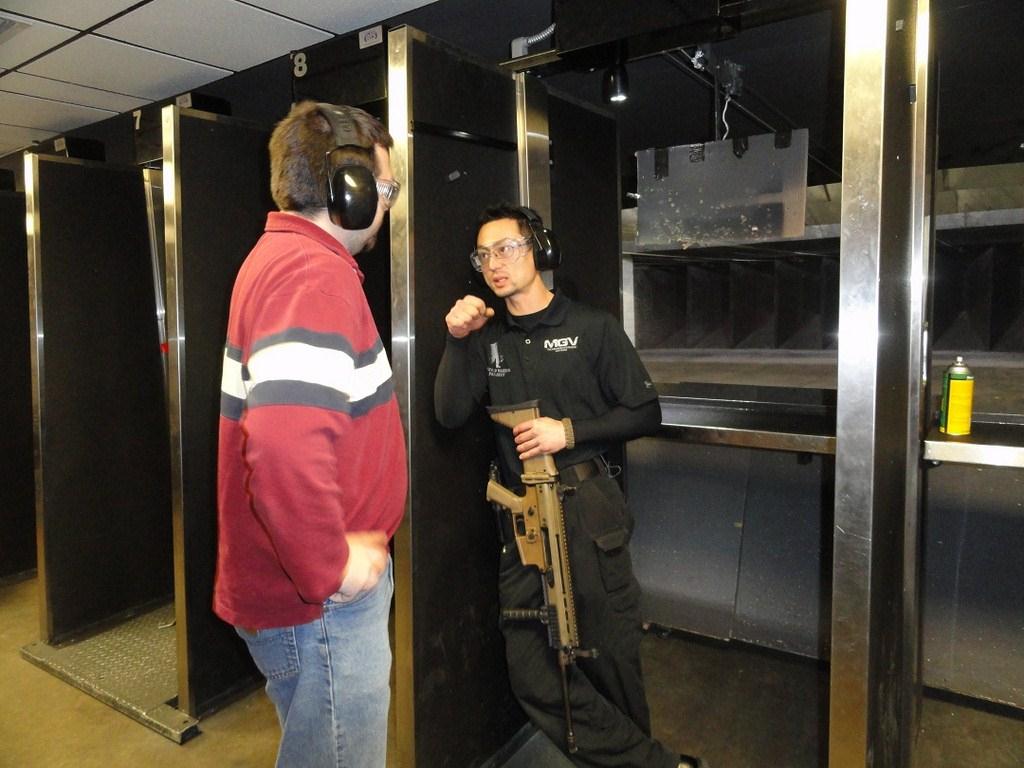 I also watched and spoke with the other MGV clients at the range off and on throughout our time there, and much of what Lucus and Lauren told us regarding what they expect out of the experience was true.  Especially when watching the other four with us in the range fire off their weapons.  Their apprehension leading up to the range quickly disappeared and everyone was very eager to get to the next weapon on the list.  It also bears mentioning that this is not just for the guys, as three of the four clients with us as seen in the video and photos, were females.  We had ridden over to MGV with them in the party bus and found that they were all gamers and that the ladies guy friends were jealous of where they were going.  We received permission to take some video of the group as they worked through their shooting their weapons so we could show of just how cool the experience at Machine Guns Vegas is:


A lot of people come to Vegas and seek out a more intimate setting for their fun, so MGV provides VIP accommodations for those that are looking for such privacy.  In addition to a separate entrance, the VIPs have their own lounge, restroom, dedicated staff and access to a two-lane private range.  The VIP lounge is the centerpiece, sporting a large flat panel TV, refreshments and various gun decorations on almost all of the walls.  We were told one story where an entire family took in the VIP experience as MGV is very child-friendly. 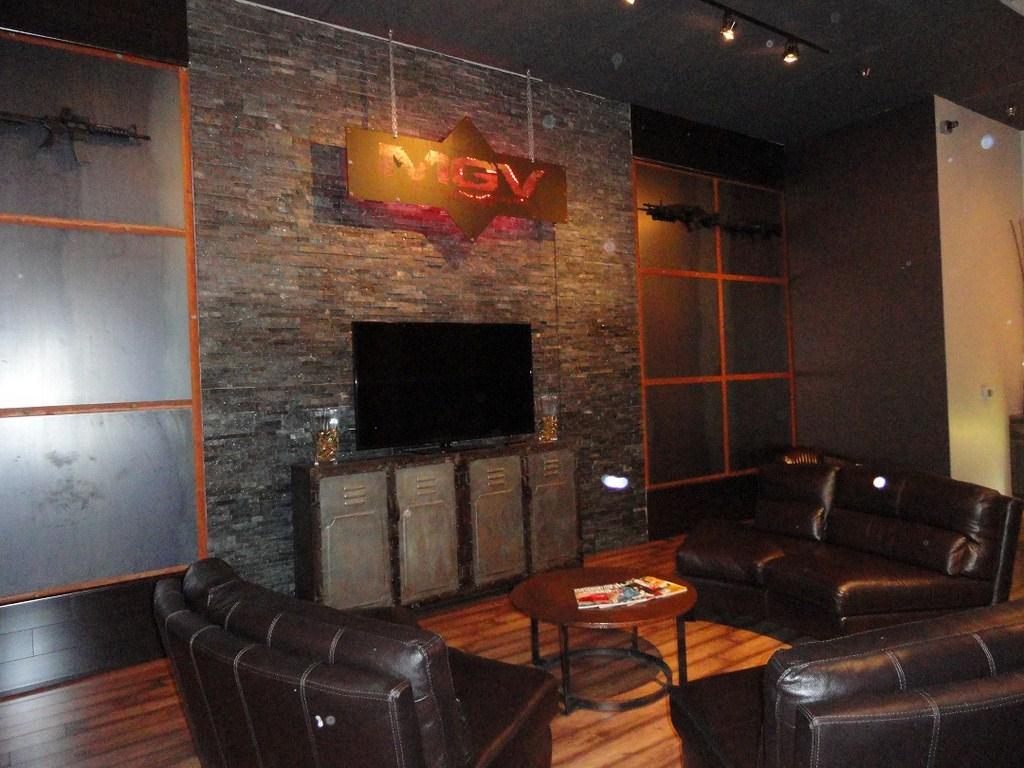 In addition to the multiple shooting packages, Machine Guns Vegas has offered concealed carry weapons classes and day packages for those looking to make a larger investment in their experience. They also carry some “special” weapons that you won’t find elsewhere in the city, with the latest addition to the MGV arsenal being the M203 Grenade Launcher. I am not sure what gun it was attached to, but you can find the launcher itself in-game as an add-on to machine guns in Call of Duty: Modern Warfare 3. 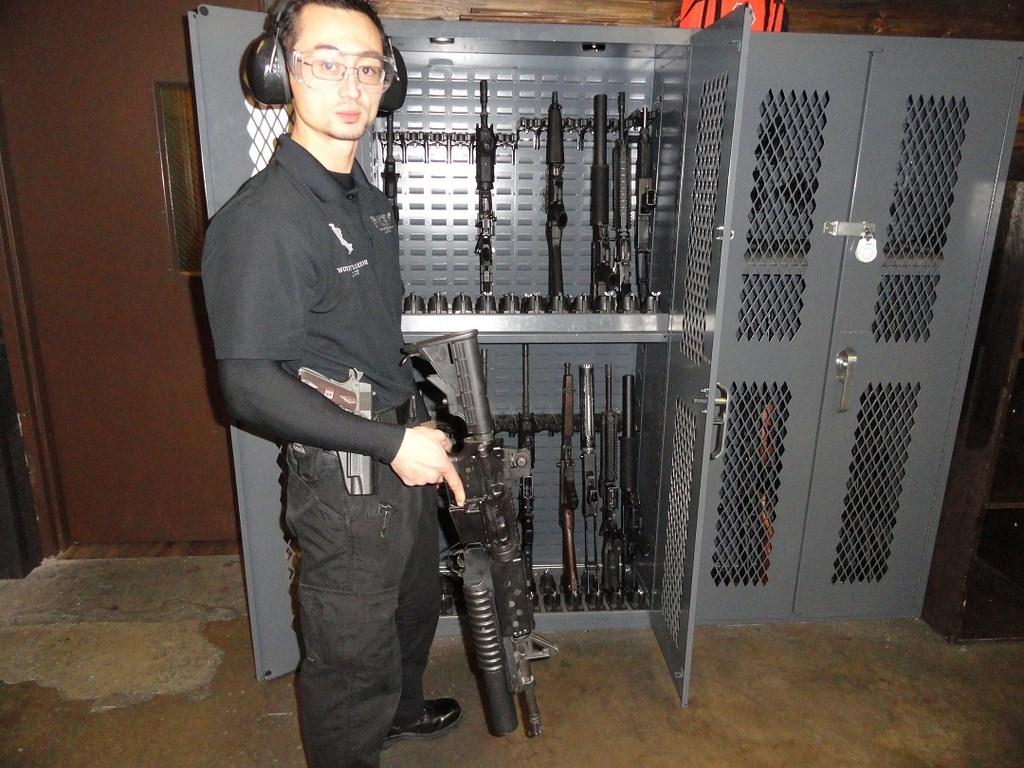 If you decide to visit Machine Guns Vegas, you will find more than just beautiful women and a shooting range.  The MGV facility and staff are set up to provide a first class experience, with the Gun Girls (fully versed in all the weapons) helping you figure out what shooting package you are looking for.  They then hand you off to a range staff that is predominately ex-military who will always be right by your side to assist with safety, pointers and anything else you may need them for.  Sean and I would encourage any gamers that that have spent hours behind a controller playing a soldier to take a visit to Machine Guns Vegas to experience what a real weapon feels like in your hands.


Sean and I would like to thank the staff at Machine Guns Vegas as well as clients Phillip Gibbs, Katelin Bassett, Stephanie Franklin and Amber Tuten for allowing us to shoot video and photos of their experience.