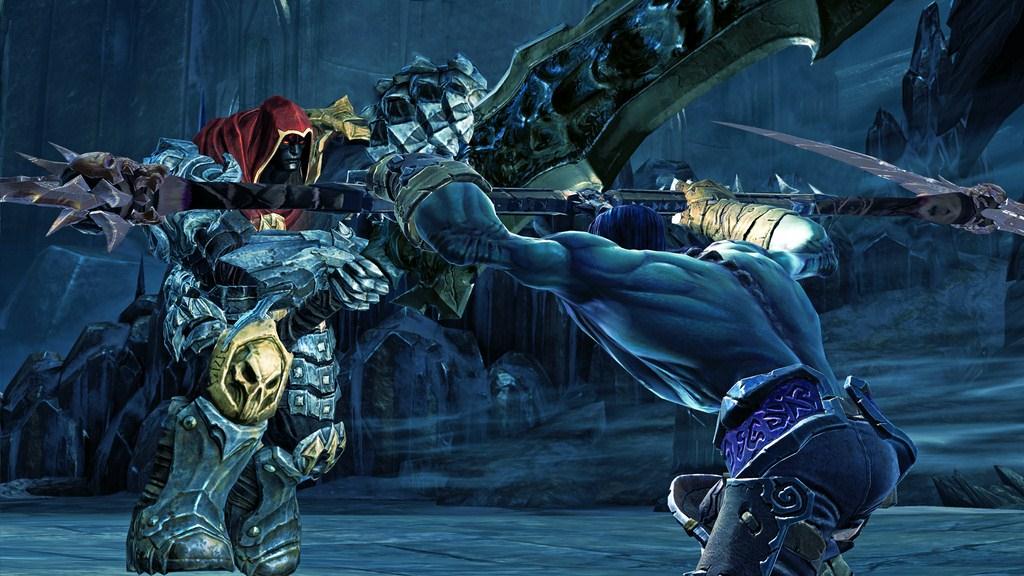 Written by Sean Colleli on 1/17/2013 for WiiU
More On: Darksiders II
2012 wrapped up with some interesting, and unfortunate, events in gaming. Against some pretty ugly odds the Wii U launched successfully, selling out in its first week thanks to a solid lineup of third party software. On the other hand, THQ recently filed for bankruptcy, leaving the future of many of its long-running franchises in question. It’s ironic then, and rather appropriate, that THQ and developer Vigil delivered one of the Wii U’s most solid third party ports with Darksiders II. While many gamers experienced Vigil’s mythological game genre mashup last year in August, Wii U owners arguably get the best version.

For those of you who haven’t been introduced to the Darksiders series, or Darksiders II in particular, Vigil’s fledgling franchise is a “greatest hits” compilation of both story and gameplay conventions from several major genres. The story concerns the Four Horsemen of the Apocalypse, in a gleefully melodramatic mixture of Biblical and Norse legend. In the first game, the horseman War was the protagonist, but during the events that transpired he kind of accidentally brought about the extermination of humanity. Now he’s standing before the Charred Council—essentially God’s Department of Internal Affairs—and awaiting whatever grim justice they decide to pronounce.

Naturally, War’s brother horseman, Death, seeks to exonerate War; he’s just not entirely sure how to do it. And so begins a deep and lengthy adventure, where Death will travel to distant cosmic lands, battle the shadowy, encroaching Corruption that threatens creation, and combine a number of gameplay styles while he does his thing. 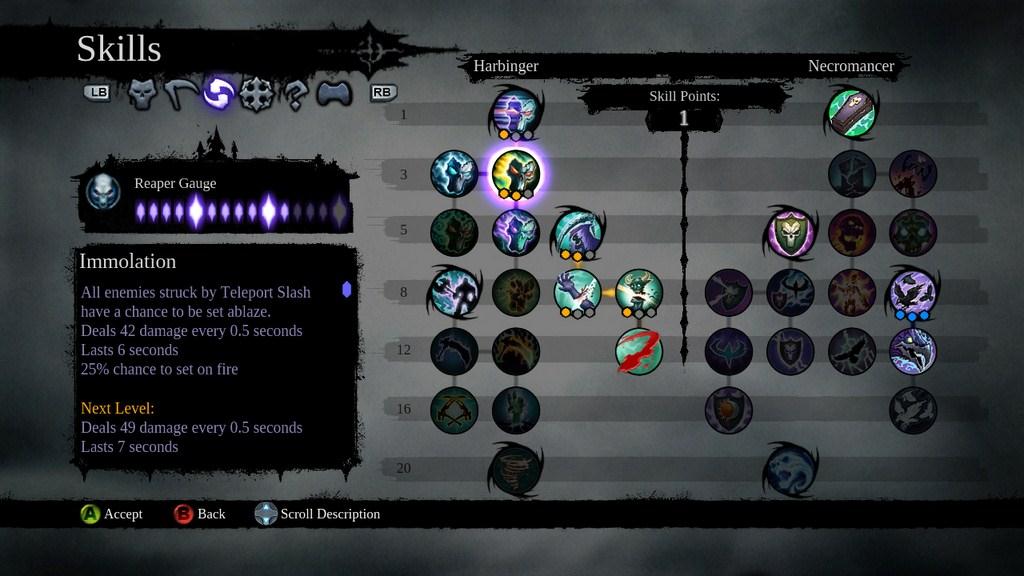 Much like the original Darksiders, the sequel blends numerous gameplay styles into one action adventure, but Darksiders II deepens each style to the point that there’s a lot more in each branch of Death’s abilities. The platforming is a lot like Prince of Persia, and although the controls are slightly different, you’ll still be running up, down and across walls, vaulting over obstacles and leaping between stalactites and other ceiling-mounted debris, precariously hanging over dizzying drops. Death’s platforming skills seem a bit random at first—there are a few places where he should obviously be able to vault, but can’t—but you soon recognize the designated places and surfaces that are designed for him to parkour off of.

As in the first game, the combat is very similar to God of War. Death can carry both a primary weapon—usually a scythe, appropriately enough—and a secondary weapon, which can either be heavy, slow hitters like clubs and hammers, or fast short-range weapons for wearing enemies down, such as wrist-mounted metal claws. Combining the two for multi-hit attacks is the best way to go, but, oddly enough, spamming one or the other can take care of most small-to-medium enemies easily.

The dungeon design is probably the aspect that is most similar to the original game; that is, it’s highly reminiscent of The Legend of Zelda series. Solve puzzles, kill enemies, fight a miniboss, collect keys, kill the big boss at the end. It’s a formula that has worked for over two decades, and while Nintendo has been shaking it up some with the more recent Zelda titles, sometimes the old ways are best. Darksiders II demonstrates this by having some very traditional, but also incredibly deep dungeons, and even a few optional side-quest dungeons, which is something you don’t really see in Zelda. 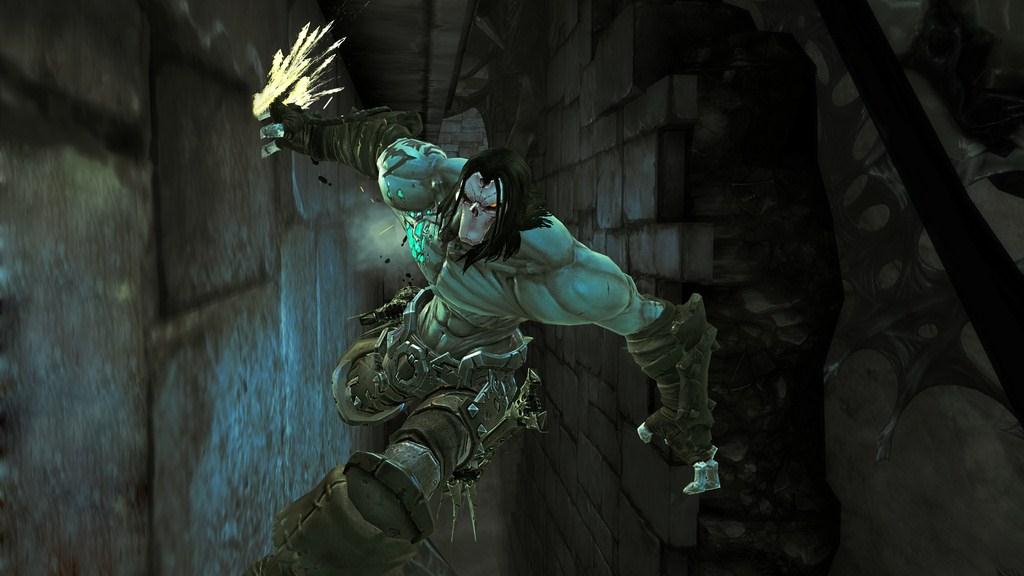 Darksiders II, however, doesn’t just recycle the design of its predecessor; it expounds upon it with new features. In particular, the RPG elements are a lot stronger. Death can level up by gaining experience points (XP) from slain enemies as in any average role-playing game (RPG), and there is also a skill tree full of magical “wrath” abilities that are akin to the mana-based attacks typical of the RPG genre. I didn’t find myself using these attacks until later in the game when the dungeons and enemies get tougher, but then again, I’ve always preferred pure hack n’ slash to magic.

The RPG elements extend to a Diablo-like loot system. Some weapons have a level cap you must reach before you can wield them, but Death can also equip a whole arsenal of leveled gear and clothing. Armor for torso and legs, gauntlets, boots and a final slot for a talisman all grant stat buffs, in addition to making Death look even wickeder than he does at the beginning of the game. Darksiders II’s loot system isn’t so deep that you’ll get hooked on collecting every last item the way you would in Borderlands, but it’s extensive enough that you won’t pass up any treasure chests. The low-level gear dropped by enemies can be sold as well, so it pays to collect in this game.

Considering Darksiders II is such an even blend of gameplay styles and genres, it’s also a very good impromptu primer on how the Wii U will handle several types of traditional games. Nintendo Land might project how games will innovate on the Wii U hardware and controller, but Darksiders II shows how more standard games can be adapted to the console as well, and the result is at once promising and a relief. 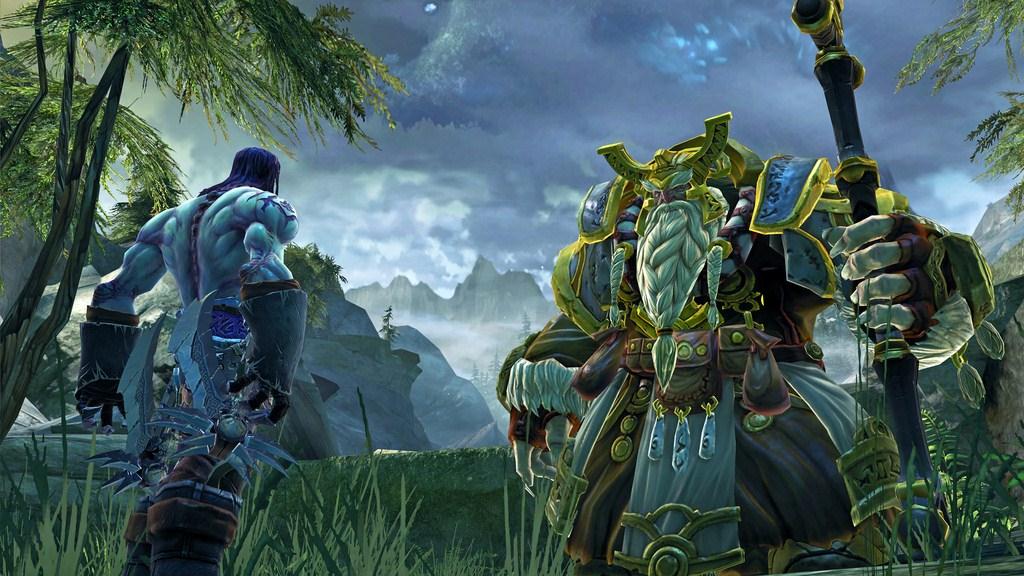 The Wii U version puts the inventory, power allocation and map on the GamePad’s touch screen for quick access and management. While it took me a while to figure out the menus, once I had them mastered it was a lot more convenient to just use the touch screen instead of pausing the game to swap items or fast travel. The map in particular was very helpful because Darksiders II is a positively colossal adventure, magnitudes bigger than the first game, so having all the overworld locations and quests displayed at a glance really cut down on the confusion. I must admit that this game’s depth and breadth snuck up on me—it took me a lot longer than I expected to get a feel for it. Darsiders II rivals most recent Zeldas in scope, even the exhaustively dense Twilight Princess, and Darksiders II is much heavier on the side quests as well, so if you want to complete this game 100%, be prepared to set aside a large chunk of time.

Darksiders II is also a pretty good game to demonstrate the baseline graphical and audio abilities of the Wii U. Up close, some of the textures and models are a little rough, but then again, Darskiders II isn’t the kind of game meant for intricate examination. If you step back and take it in all at once, it’s breathtaking. The only thing I can liken it to is a combination of Fable and Borderlands, with a dash of the occult for good measure. The characters are exaggerated and larger than life, oftentimes literally; just because Death is the Grim Reaper doesn’t mean he’s the biggest guy around, and other characters and the environment routinely dwarf him. The locales Death visits are also refreshingly vibrant and expressive. I was afraid that a game about the Angel of Death would be angsty, oppressive and tiresomely bleak like Twisted Metal or some of the other insecurity-ridden emo franchises of the 90s. The art direction in Darksiders II left me pleasantly surprised.

The audio side of things is also atypical for the subject matter, but, like the visuals, the music fits the gameplay very well. As you’d expect, you get some very grandiose, forbidding Night on Bald Mountain-style orchestral pieces appropriate for Death and the treacherous places he explores, but there are also Norse-inspired string melodies for a few of the lush overworld locations and just about everything in between. The music generally sticks to a classical, orchestral style, but there is a lot of variety and most of the music fits the time and place where it is playing. The soundtrack is very reminiscent of the Assassin’s Creed series, which comes as no surprise; Jesper Kyd, the Danish composer who worked on most of the Assassin’s Creed games, also scored Darksiders II. His work is impeccable and grand here as ever.

The voice acting is something else; not bad, just…unexpected. The supporting cast is all right on the mark—bombastic, unsubtle, sweeping—all the things you’d expect from this kind of epic myth, as subtlety and nuance aren't found much in apocalyptic scripture. I particularly liked the Makers, a race of ancient giants Death meets early on, who all speak with a Scottish brogue and act as God’s architectural contractors. Death, however, was another story. To put it bluntly, he’s sort of an arrogant smartass. Like the rest of the cast, he speaks in old-timey Renaissance faire English, but his attitude is impatient, dismissive and snarky. It’s not what I was expecting out of the Grim Reaper, a being supposedly very old, but while Death’s attitude can be distracting, Michael Wincott still does an excellent job in the role.

If you missed Darksiders II last year and need a rich, solid adventure game to put your new Wii U through its paces, it’s worth it to check out the game now. The Wii U version also includes the first downloadable content (DLC) chapter, Argul’s Tomb, and the four weapon/gear packs released as DLC, right on the disc. If you have the console but have been holding out on Darksiders II, it’s definitely worth a buy. Here’s hoping THQ’s unfortunate bankruptcy issues get worked out, or at least that Vigil finds another publisher. After riding with Death through hell and back, I’m eager to explore the adventures of the two remaining Horsemen of the Apocalypse.
Darksiders II is an excellent launch game to test your Wii U. Its mixture of gameplay styles puts the console through its places and proves that the Wii U is well adapted to traditional games. Besides that, Darksiders II is an enormous adventure and the Wii U version even includes the first round of DLC on the disc, so if you’ve been holding out on Darksiders II, the Wii U version is the one to get.