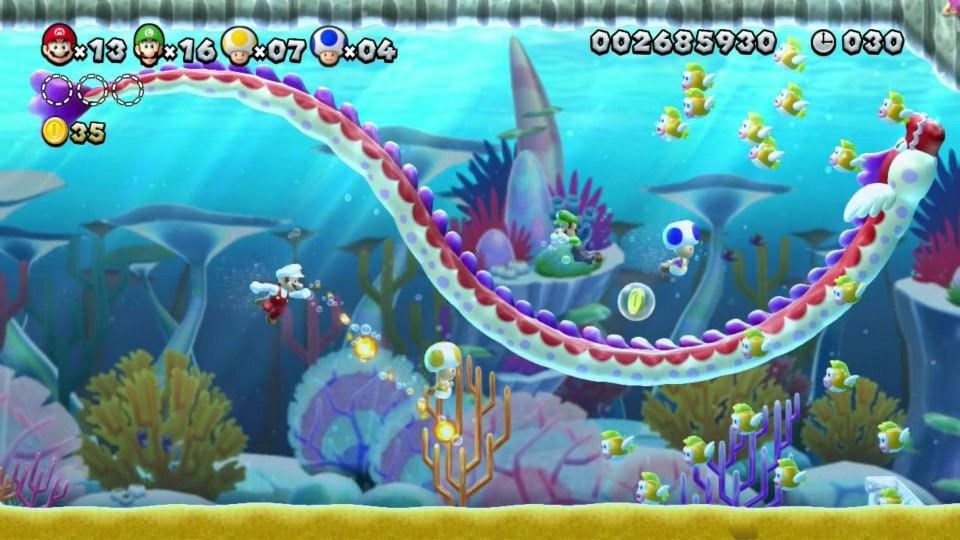 Written by Matt Mirkovich on 1/21/2013 for WiiU
More On: New Super Mario Bros. U
Playing every Mario game to date you think I'd be ready to actually review one, but I'm kind of at a loss here. It's Mario, it's practically bullet-proof, and it has proven time and time again to be the standard bearer for platforming games across all consoles. There's a certain something that Nintendo has developed with Mario over the years that no one has managed to replicate yet. Playing New Super Mario Bros. U it doesn't feel like much has changed from its last outing on the Wii, but a lot of the little things that this game does make it feel like a fresh new game and sets it apart from the 3DS release of New Super Mario Bros 2 just a few months ago. As a launch title, New Super Mario Bros. U does a great job of showcasing the WiiU hardware and makes great use of the WiiU Gamepad.

Man this game looks good in 1080p and Nintendo's art direction on the title continues to give it that unique look that really sets it apart from most games out there. As a launch title it is surprising to see this game look so good. Granted the visuals aren't that much of a step-up from New Super Mario Bros. Wii, but they still look damn impressive, and it's a shame that some of the one off levels with really interesting art direction are confined to such miniscule use, I'm looking at you Starry Night inspired level! Playing the game on the WiiU Gamepad the visuals take a little bit of a hit, but the game still looks good. The audio has become instantly recognizable and hasn't received any significant changes this time around. Mario still has his standard fair of expressions provided by the wonderful Charles Martinet and the soundtrack still maintains the Mario magic with plenty of orchestra work. The audio mixing is also spot on, and little things like changes to the track bass when carrying a Yoshi help keep things fresh and peppy.


Bowser's back and he's brought all the kids along in another attempt to take over the Mushroom Kingdom and kidnap Princess Peach. It's not like the story has meant much in a Mario game, play as Mario, go defeat Bowser, save the princess and the day. Mario's posse includes Luigi, and two Toads, and if you're feeling sadistic a fifth nameless entity who can be both a benevolent force and a twisted tyrant that can help or hinder you on your quest to save the Mushroom Kingdom. In this case I'm talking about your friend, that guy on the WiiU Gamepad who's got that mischievous smirk on his face as if he's been given keys to the kingdom. This 'friend' is either going to be loved or hated by the end of your next play session.

Playing with the WiiU Gamepad allows you to place blocks on the field to help the other players as they try to get through more than seventy stages. Of course with my friends this more often than not would devolve into the fifth wheel placing blocks in the direct path of our characters in an attempt to block any progress and after a bunch of expletives and laughs we'd all settle down to clear the stage, and then the mayhem would start up again in a rather endless cycle. This really can be a ton of fun and adds a new layer of challenge to the game. If you're playing solo then using the WiiU Gamepad will simply function as an extension to the TV, giving the full game experience on the Gamepad's smaller screen. Thankfully there isn't any kind of menu switching necessary to active this setup and it's accessible right out of the box.

Playing this game like a typical Mario game is a satisfying and rewarding experience. The stages are well built and it felt like whenever I died it was my own fault and not the fault of enemy or platform placement. The star coins make a return and like always have a secret that unlocks when they are all collected, and doing that is a monumental task all its own. The hidden stages where some of them are located are rather devious but aren't something that's impossible to figure out. As for the levels themselves it looks like a number of the levels were modeled after stages from Super Mario Bros. 3 and Super Mario World, with a lot of moving parts that took me back to some of those old favorite stages, and by far my favorite section of the game is the Soda Jungle that features some giant levels that were inspired by world four of Super Mario Bros. 3. Yoshis are back and this time even baby Yoshis are joining in on the fun, they'll do stuff like light up caverns, blow bubbles that turn enemies in to coins, and even allow a little bit of limited flight, sort of like the new acorn mushroom that grants your character a flying squirrel suit. The fact that there is a P version of the acorn mushroom is also a great nod to past games.

Multiplayer is obviously a big draw in Super Mario Bros. U and outside of the story mode there are a number of multiplayer modes and challenges that can extend the playtime beyond the main game. There's actually a surprisingly large amount of challenge stages and they offer up objectives like time attack or 1-up collecting.  Players can also use their Mii during these modes, complete with Mario hat, which is a silly thing to get hung up on, but I love small things like this. 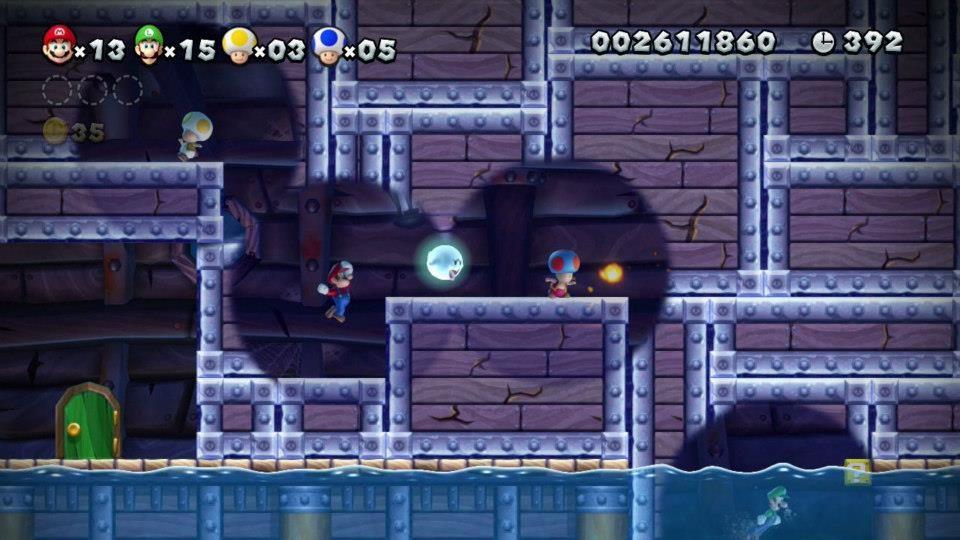 New Super Mario Bros. U continues the odd tradition of limiting saving your progress to only after completing major milestone stages like the mid-boss castles and boss stages. It's a strange design choice, granted you can just use the quick save feature, but why even have that in the first place? And why is being able to save wherever you like an unlockable feature? I'm seriously baffled by this and it seems like a stupid thing to get hung up on but really it's the biggest problem I have with the game, and even then it's minor in the grand scheme of the game.

Playing New Super Mario Bros. U on it's own was a great experience, playing it with a bunch of friends made it even better. It kind of goes without saying that if you're picking up a WiiU you should get this game. I thought I was starting to somehow outgrow this franchise, but playing a classic platformer like this I'm reminded of how gaming took root with me, and the only thing that came close to replicating that feeling is last year's excellent Rayman Origins. New Super Mario Bros. U proves that Nintendo is still one of the best in the business at crafting a fun experience out of a simple premise and this game would fit right in to any gamer's library, no matter how aged or jaded they may be.
A solid entry in the Mario franchise. It doesn't do anything to shake up the formula, but I think this is one of those franchises that have proven time and time again that you don't mess with a good thing.