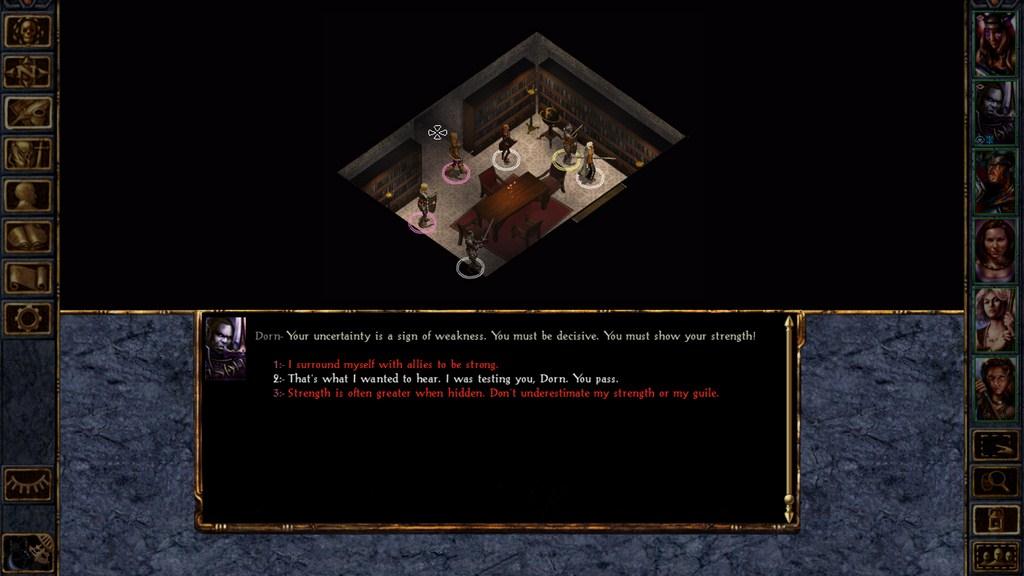 Written by Tom Bitterman on 1/14/2013 for PC
More On: Baldur's Gate: Enhanced Edition
It's tough to know how to review an enhanced edition.  The basic idea is to look at how the new features improve/expand/fix the original and rate that.  But what if the original sucked?  It is hard to separate the new content from the original game.

“Baldur's Gate: Enhanced Edition” (BG) has this problem, but turned exactly around – the original game is an all-time classic, but the “enhanced” parts are nothing to write home about.  For those readers that weren't around in 1998, the original “Baldur's Gate” was the game that established BioWare as a major player in the RPG genre.  It has a secure star of honor in RPG history.

The new version attempts to improve upon the old in three areas: a new play mode, new characters, and bug squashing.  We will address each in turn, but first a description of the game itself and how it is played is in order.

The first thing you will notice when starting the game is that the graphics look primitive.  There has been little to no attempt to upgrade the look of the game from the mid-90's original.  Outside of a few minor improvements (that you could add to the original game from the many mods that exist for it) the game looks like it just came out of the box for Christmas 1998.

This is not in itself a bad thing.  A lot of the feel of the game depends on the isometric (overhead) viewpoint.  The characters and monsters can look almost like little figures that can be moved around the battlefield, city, and sewers.  A first-person or over-the-shoulder perspective would make things even more confusing than they are.

Adding to the feeling of playing with miniatures is the use of 2nd edition AD&D rules.  This made sense in the original, as that was the current version of AD&D.  BG has retained this ruleset, which new players may find confusing.  I could outline the many, many differences between 2nd and 4th edition AD&D but there is no need to beat that dead horse here.  A quick search will satisfy the curious reader as to the holy wars being fought over the various versions.  A few points to keep in mind while playing are: advancement is slow (you will probably only gain 7-12 levels over the entire game); character positioning is critical; and special abilities are important.  Expect to lose some fights in this difficult game. 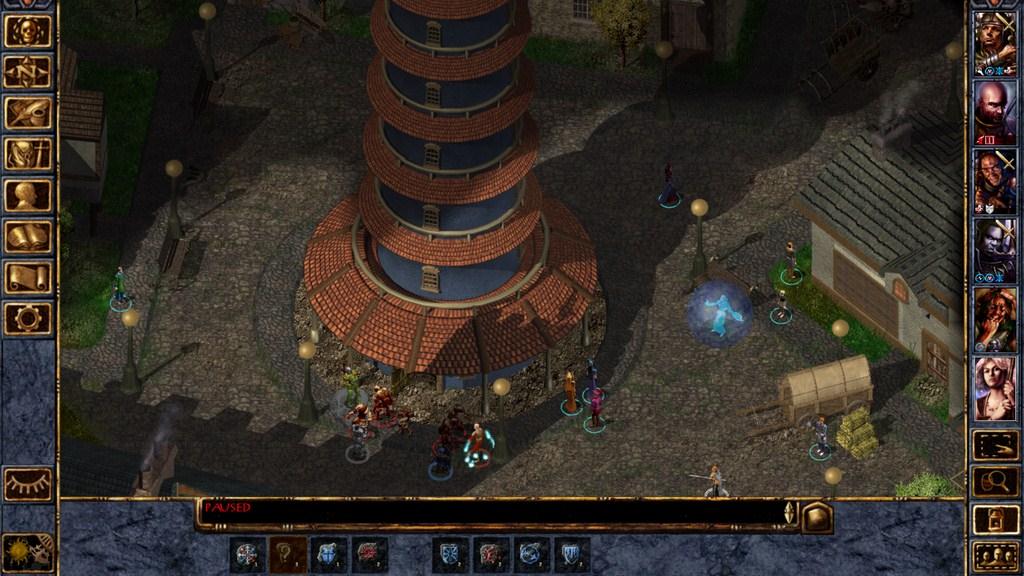 Not only is combat the same, so is the story (for the most part).  You start out as a lowly apprentice when your mentor is killed before your eyes.  You have to find out who killed him and why.  The deeper you get into the mystery the bigger the stakes get.  Along the way you fight terrible monsters and join up with some interesting characters.  If it sounds somewhat generic, well, it is.  It's still a good story, well-told with lots of good voice acting.  Given that the graphics do not provide much of a look at your party members their voices have to carry the weight of their personalities.  They do a good job – you will remember many of your party members long after you are done with the game.

The replication of the original game goes down to the smallest detail.  If you hunt down a walkthough for the original game (and the “Tales of the Sword Coast” expansion) you will find that all the monsters, traps and hidden items are in the same places.  Even the cheat codes are similar.  You will want to keep a walkthrough and some cheat codes handy as this is a tough game.

The new play mode is the “Black Pits”.  You can build a character and put it through a series of increasingly tough tactical combats.  This can be fun for a quick dose of action or as a way to learn more about the combat system and polish your skills.  It's not much of an improvement over saving and reloading in-game combats, but it's a nice little change of pace. 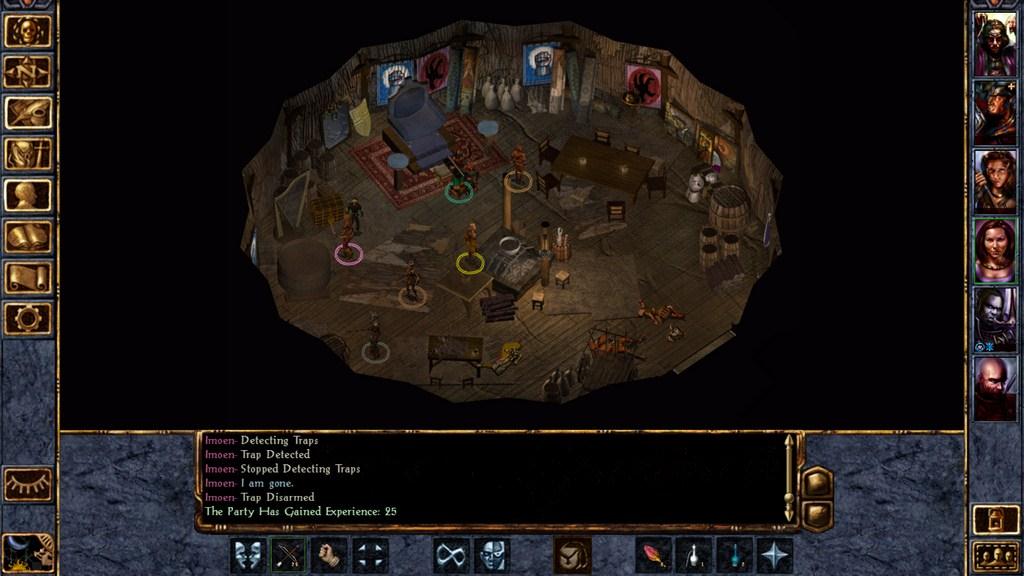 There are three new characters: Rasaad yn Bashir (a monk), Neera (a wild mage) and Dorn Il-Khan (a half-orc Blackguard).  While none of them are required in order to finish the main plot, each comes with their own story (basically, an additional adventure) and can provide some interesting capabilities to your party.  If you played the original game, or are looking for some variety in another playthrough, these characters can add some variety,

The original game had lots of bugs – companies have been shipping buggy games since companies starting shipping games, and maybe even before that – and there were high hopes that this release would fix them.  Perhaps it has.  Even if it did, however, it has introduced a whole bunch more.  You will want to save your game often and not just in case combat goes badly.  Patches have been forthcoming but the original release was not promising in terms of stability.  Although it is not a major bug, the path-finding is truly atrocious.

The first impressions of a gamer used to more recent RPGs (for example, “Dragon Age: Origins” or “The Elder Scrolls V: Skyrim”) will be that the game is graphically primitive, slow-moving, unevenly difficult, and simultaneously simplistic and overly-complicated.  It is best to avoid such comparisons and take the game for what it is: a groundbreaking game from 14 years ago.  When appreciated in this way, it is worthy to stand in the company of the aforementioned games. 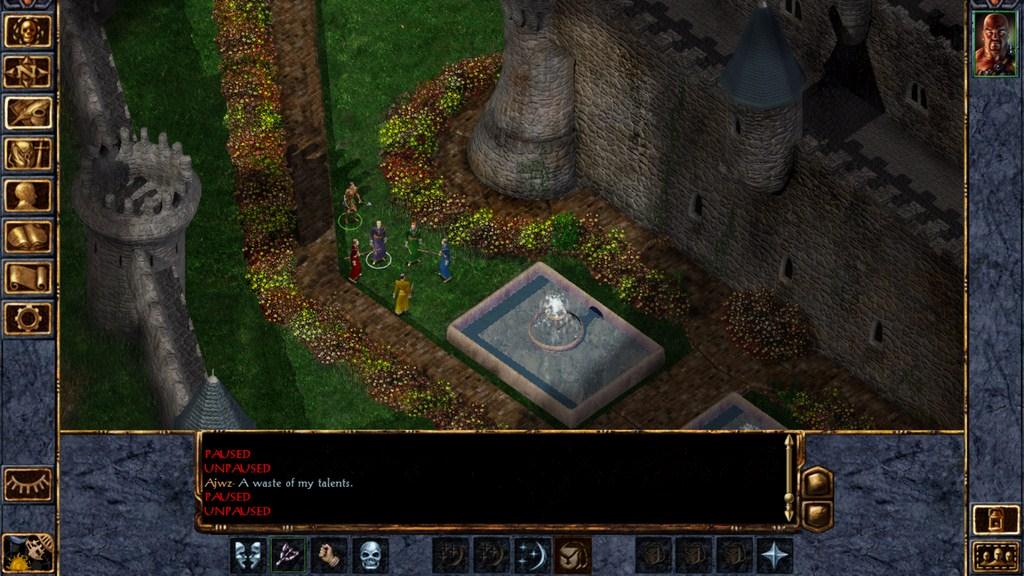 One can pay just $10 to get the original and download a few mods.  Doing this will yield an almost identical game - all of the main quest and most of  the side quests will be there.  So is it worth paying the $20 to get the “Enhanced Edition”?  There are three reasons I can see: iPad and Android support; the additional characters; and the possibility that if this works out they will remake “Baldur's Gate 2”, which would be neat.

In summary, “Baldur's Gate: Enhanced Edition” is pretty much just the original game running on a new engine with some minor extras.  The original game is so good that this remake can be recommended on that basis alone.  If you are an RPG fan looking for some classic gaming on your tablet then this is a must-buy.
The original game is a classic. The “Enhanced Edition” is a near-clone, with some additional content and different bugs. If you haven't played it before, or would like a deep RPG to put on your tablet, this is a good buy. Veterans of the original will find the added material hard to justify for the price.