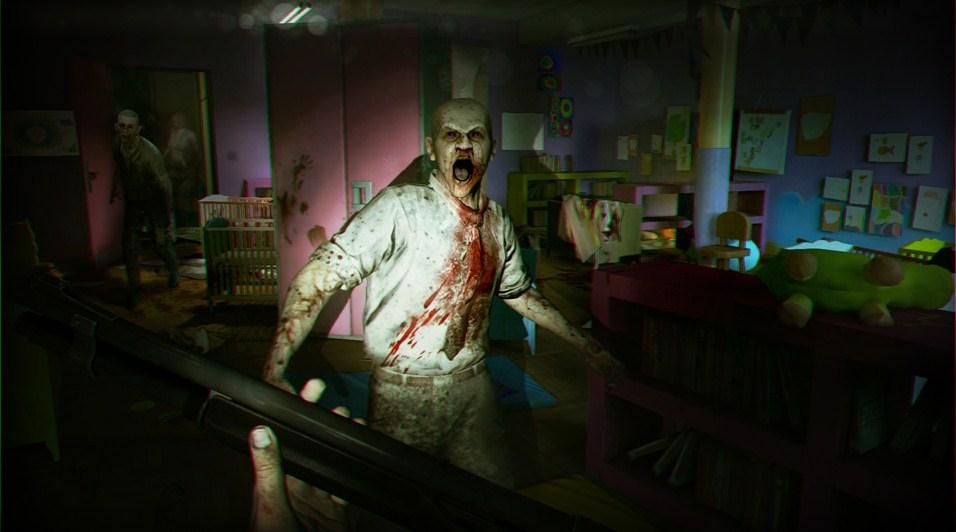 Written by Matt Mirkovich on 12/3/2012 for WiiU
More On: ZombiU
When ZombiU was first unveiled at E3 this past May, I found myself thinking, 'Yawn, another zombie game.” Game developers have fallen in love with zombies over the past few years and now that Resident Evil has strayed so far from its roots that it's almost unrecognizable to people who were there from the beginning it's actually surprising and refreshing to see that ZombiU is a decent attempt to bring the survival and horror back to 'Survival Horror.' Though not without some hiccups and flaws, ZombiU actually had me fearing for my life, or lives, as I clumsily allowed myself to fall to London's undying horde a number of times.

London is under siege by the undead, and as an uninfected civilian you'll be exploring a ravaged town that has been absolutely decimated by this zombie apocalypse. After falling in with 'The Prepper' and receiving some basic survival instructions from him it's time to get ready to survive this mess. And while 'The Prepper' is all about being ready and able to survive, London is completely overrun and the safehouse that you're shacking up in will eventually fall to the shambling masses. You'll hunt for supplies, encounter some people who want to help, and others who have simply lost their damn minds as a result of this blight in this somewhat short fight for survival. The first playthrough will take anywhere from eight to twelve hours depending on how adept you are at staying alive, but even in this short experience, the pacing of the story feels terribly slow. Events unfold slowly, and when nothing was happening to move the story along I felt lost. It's possible to view your objectives, and it was really helpful to be able to check out areas on the city's CCTV system to see what kind of items are available or where objective items could be found.

Dying in ZombiU offers an interesting twist to most survival horror games. Upon death you will find yourself in the shoes of a new survivor. If you want to get your gear back that your previous survivor was carrying you can track them down and save them from their zombified fate and raid their backpack for the goods. If you happen to die before getting back there though, the items return to the game world and if you're playing with an internet connection it is possible to find other fallen survivors in your game. Sometimes they are carrying things, other times they are not, but it's always a safe idea to take them out when you spot them. After completing the game, Survival Mode is unlocked and that offers you a one shot chance at clearing the campaign, saving won't do you any good, and it can be quite the harrowing adventure.

I don't find myself getting scared when playing games very often, but to the credit of Ubisoft's Montpellier studio, I found myself terrified time and time again, clutching my WiiU gamepad, tapping at the screen of my 'Prepper Pad,' given to me by the all-knowing and all-seeing Prepper, hoping that the sonar would pick up on zombies close to my proximity, when I found a battery upgrade that made the sonar automatic I was glued to the screen even more. These zombies are incredibly aggressive and are easily drawn to the flashlight I've been carrying around, so it takes a lot of slow moving and patience and judicious use of the sonar. This sonar also picks up on animals that are roaming around London and often makes this tool a rather sadistic indicator of what is immediately surrounding you. The WiiU pad also functions as a scanner, that when held up functions like a black light and in turn reveal clues about where to go, or what is present inside of lootable objects. This is actually something I recommend doing often, because in the dark scary London alleyways, light is at a premium, the flashlight you're carrying will inevitably run out of batteries and must be switched off to restore power. The WiiU pad also acts as a scope for weapons that are meant to pick off zombies at a distance, like with a sniper rifle or crossbow. 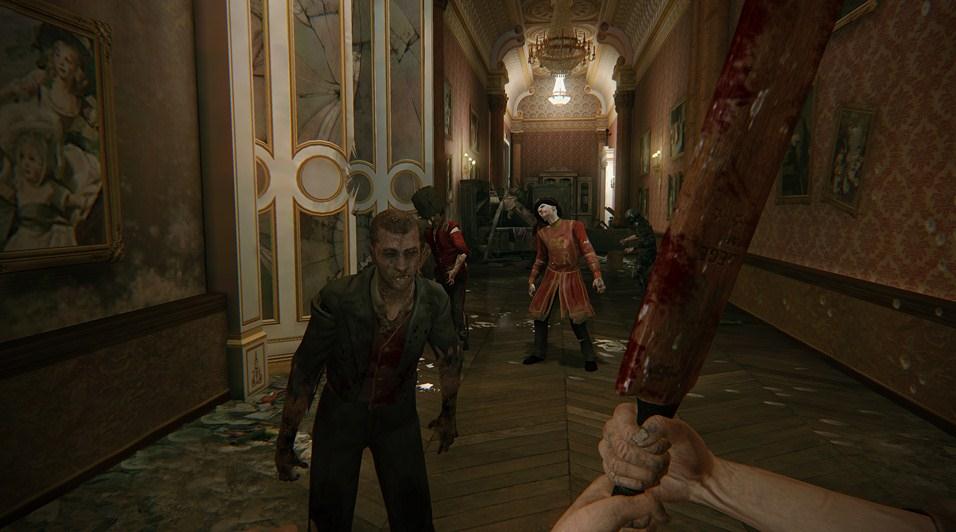 These uses of the WiiU gamepad justify the existence of ZombiU and it proves that the developers had a solid concept when thinking of how to use Nintendo's new console but somehow outside of these one or two brilliant ideas, the rest of them fell flat. Touch a button for a sonar, simple, it works, that's awesome. But tap a screen to remove a barricade on a door, or lift a manhole cover, that's the kind of stuff where I think Ubisoft missed on the execution. It smacks of laziness, or simply being non-creative, and while it still has the right idea in that it helps with the tension of the moment it doesn't leave me thinking, 'aw man that was close, good thing I tapped the screen an arbitrary number of times to get something to move.' It's bizarre to me that they had some great ideas with the lock picking, but when it came to the other major actions it was simply 'tap the screen repeatedly, but don't do it too fast because for some reason the WiiU pad won't recognize it.'

I'm not terribly big on controlling a first person shooter with anything other than twin sticks, or a mouse and keyboard, and ZombiU functions great with twin-sticks, but trying to play the 'King of Zombies' multiplayer mode with a Wii Remote and nunchuck felt a bit awkward. I'd constantly be fighting to keep the game from spinning wildly out of control, since pointing the Wii Remote towards the edge of the screen causes players to turn, it does so at too fast a pace and makes it easy to get lost. Playing the game in single player is perfectly functional, and while switching back and forth between the main screen and the WiiU's gamepad screen is a little strange at first it quickly becomes second nature to perform all necessary actions. 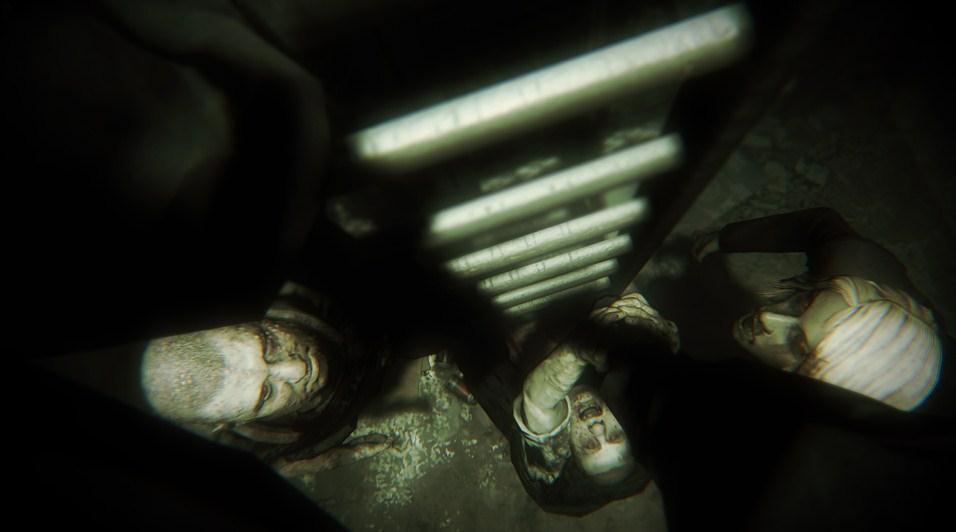 While ZombiU is a launch title and isn't expected to take full advantage of the WiiU hardware, it is a little disappointing to see the game turn out to be less than attractive at times. Ubisoft meant to hide some of the repeated rooms and textures behind an overly aggressive filter that blocks a lot of the players vision, especially when looking toward bright lights. I get that this adds a lot to the ambience of ZombiU, but I'd think that if the game were taking place from a player's point of view their eyes wouldn't be covered in dust and crap that seems to obscure their vision when playing the game. There are also a few issues with repeated animations and really awkward movements when fighting zombies. A great example to display this would be to try hitting a zombie up some stairs. Rather than tumble over, they simply slide backwards and pop up in a very awkward way.

You'll be seeing a lot of the same animations because combat is surprisingly shallow in ZombiU. Your only melee weapon is a cricket bat this is only swung one way, and with a total of four different voices for characters you'll be hearing a lot of the same grunts and screams when swinging for the fences. You'd think Ubisoft would offer players more than one way to swing a cricket bat, rather than just attempting to bash a zombie's head in I would have liked to have been able to swing for their legs. This would have been especially helpful when encountering more than one zombie, but I get that this is meant to contribute to that feeling of helplessness. But I'd like to think in a pinch I'd have the common sense to attack in a way that is a little bit more effective. Combat against each zombie also feels like an epic battle, because that cricket bat seems terrible at hurting them, but just a few swipes from a zombie, or a bite, and you're going to be joining the undead army. 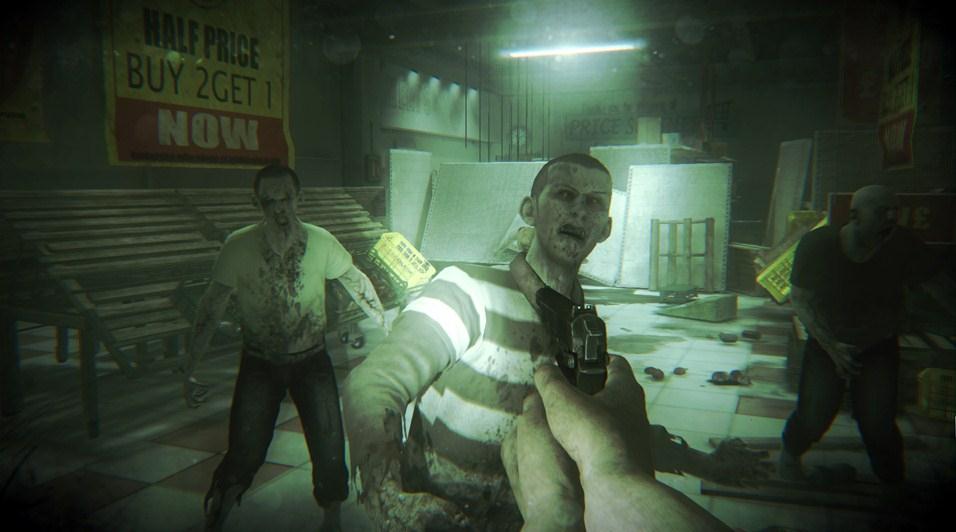 There are guns and explosives that can be used to eliminate some zombies, but ammo is incredibly limited, unless another zombie from another world happens to wander in to your game and is loaded. Unless you're proficient at headshots expect to unload a lot more bullets than necessary to put a zombie down. Guns feel a bit under powered and their sound leaves a lot to be desired. The standard pistol sounds like an underpowered airsoft gun, and seems to be as effective as one. The shotgun, sniper rifle, and automatic weapons feel a lot better but again, ammo is at a premium, so you can't simply spray and pray and hope that those four or five zombies are all going to fall. You're almost better off in most cases to make use of flares to distract zombies. In fact to Ubisoft's credit, they made light a factor when fighting zombies as flares will draw them away, and hopefully in to the waiting zone of a mine, or perhaps you have a grenade or molotov cocktail on hand to deal with the small crowd shuffling toward that flare.