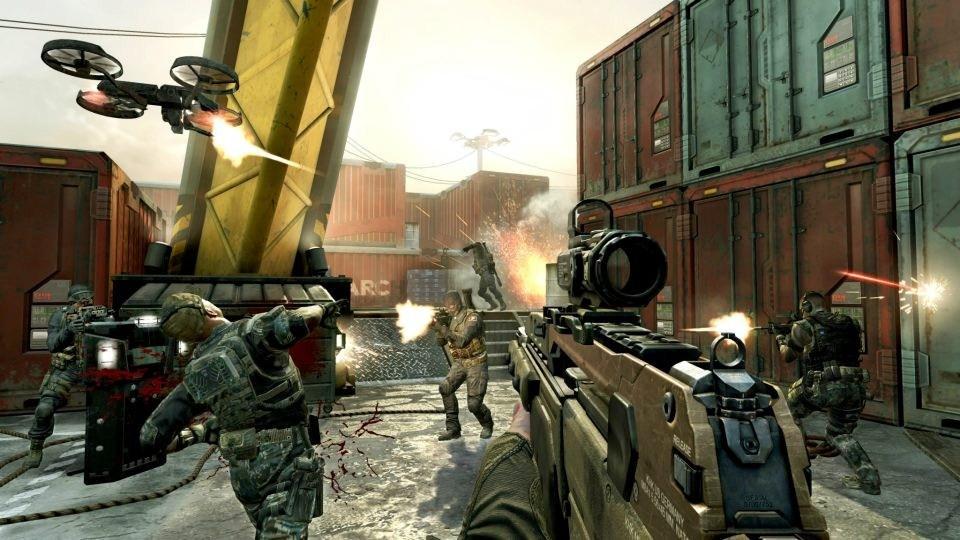 Written by Matt Mirkovich on 12/19/2012 for WiiU
More On: Call of Duty: Black Ops 2
“Brrrrap brrrrap brrrrap.” That's my friend's notice that he's lit someone up in a multiplayer round of Call of Duty. It's one of the endearing things along with the solid gameplay being refined over the years that's got me back into playing online. After going in whole hog with Modern Warfare 2, I didn't think there would be another Call of Duty game that could get me to enjoy the single player or multiplayer as much as the 2009 title. It took three years and someone other than Infinity Ward to get me to enjoy Call of Duty again. Treyarch seems to have taken firm control of the Call of Duty franchise with Black Ops 2. Playing it on the Wii U didn't initially sound like the best way to experience Black Ops 2, but after a good number of online sessions, completing the campaign mode, and enduring a few rounds of Zombies, I think it's safe to say that this is just as full featured as its PS3 and 360 cousins, and even has a few improvements over the two.

Using the Wii U gamepad to play Black Ops 2 isn't that much different from playing with a Dual Shock or a 360 controller, there are some different button mappings which are initially confusing, but after getting over that it felt like second nature. Having the gamepad screen display mission objectives is quite useful during the course of the campaign. During multiplayer the gamepad display will show a map of the current level, and when the UAV is active it will display where enemies are on screen. This works great in Hardcore games since it gives you a full view of the map. Players can also play online multiplayer with two players with one using the Wii U gamepad and another using the Pro controller. This allows both players to have a full screen experience and works quite well in practice. It's actually surprising to find almost no lag when playing online using the Wii U gamepad. Since this is such a reactionary game everything needs to be on point, and Treyarch, to their credit, has made playing exclusively on the gamepad a nearly flawless experience. 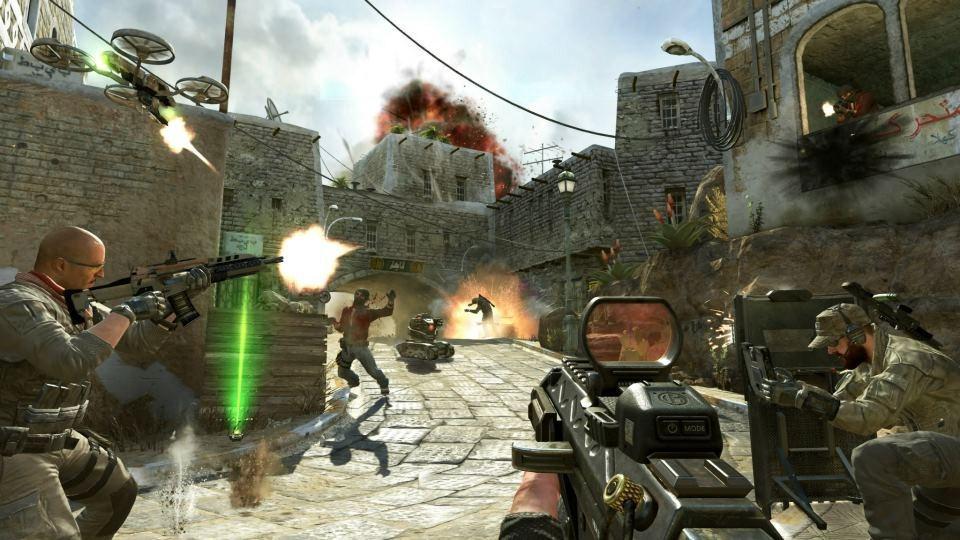 It's kind of a bummer that Treyarch didn't take their new Strike Force mode and totally integrate it to work with the Wii U gamepad. The new Strike Force mode puts players in control of a group of soldiers tasked with various objectives over the course of a stage. This ranges from protecting key points to capturing a high-value individual. Players can get a bird's-eye view of the action and order units to move to specific locations or to engage with enemy combatants. This is where it feels like Treyarch missed an opportunity to really make the Wii U version the definitive and must-have game this holiday season. Though that's not the case, the new additions to Black Ops 2 are really interesting and a step in the right direction. The branching paths during the story could have been used a little more often, but the little details in David Mason's adventure really make you want to go back to replay the missions to see what kind of different outcomes are available. Sorry Harper, I really didn't mean to scar you for life in that fire.

Having a story that gets shaped on the fly is a pretty cool concept and I like how it worked out in Black Ops 2. The story jumps back and forth between Alex Mason after the events of the first Black Ops game to his son David Mason as he chases down Raul Menendez, the man that killed David's father and is on the cusp of staging a global revolution. Also returning is Alex's right hand during the Black Ops story, Frank Woods, who provides a recap of missions he shared with Alex during the height of the Cold War. Events that happen over the course of each level carry forward toward the end, and while they don't influence the story in a truly significant way it's an interesting mechanic and I hope it's explored further in the future.

Visually the Wii U version of Black Ops 2 holds up really well. The game looks almost as good as its Sony and Microsoft cousins, by which we can tell this engine is aging, and while it can make some fantastic looking games, there are times where it also can look a bit ugly. To their credit, Treyarch managed to get the frame rate to be steady throughout the game, though there is a hint of dropped frames every now and again during the single player campaign during some of the busier parts of the story. The set pieces where the game takes place are visually interesting, especially the futuristic downtown Los Angeles. Playing online didn't have any noticeable drop in frame rate and since that's where it matters most I'm happy to see that it was locked in successfully. Playing on the Wii U gamepad is obviously going to cause a loss of visual fidelity, mostly due to the quality of the gamepad's screen, but it's still possible to spot enemies from a distance and it didn't really have much of an effect on my abilities.

If there is anything that underscores the polish of a Call of Duty game, it's the audio. The game gets a lot right with its voice cast, but the real devil is in the details. By that I mean the sound of those guns and gadgets. If there is one thing that has always been consistently good with this franchise, it's the sound these weapons make: it has always been satisfying and Black Ops 2 is no exception. Even playing on the Wii U gamepad with its miniscule speakers, the game sounds really good, and is incredibly useful during multiplayer. Being able to connect a good set of headphones to the Wii U gamepad makes things even better. 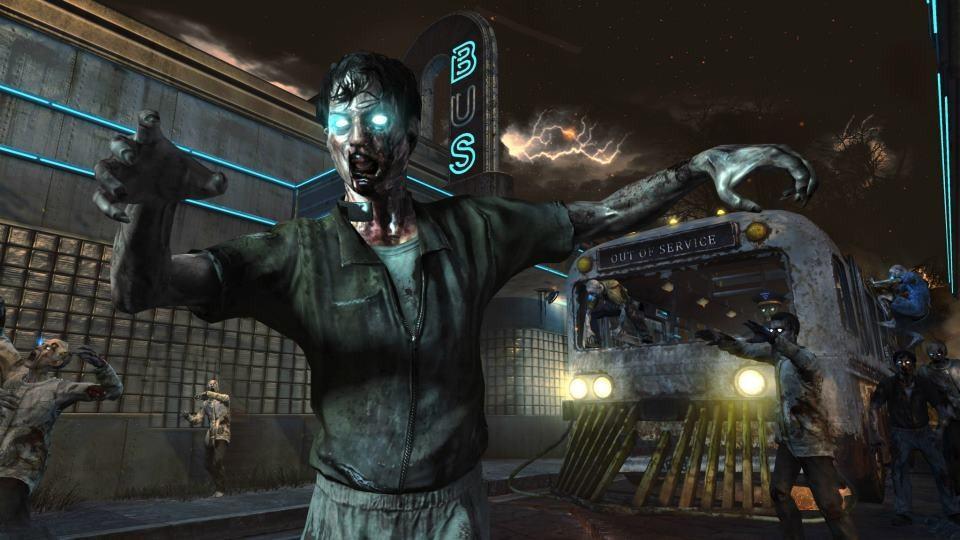 The multiplayer of Black Ops 2 is spot on as always, and the incremental changes between versions are really going to be sticking points for players. A lot of people didn't like the token unlock system before so it's going to continue to be a thorn in players' sides. The item limit is an interesting management aspect that I'm kind of fond of, it gives a large variety of character builds without making any one class seem overly powerful. The maps themselves have a great deal of variety but none of them seem wide open enough to make good use of a sniper class. Granted, I haven't learned the ins and outs of every map, so maybe I'm just not looking hard enough. If there has been anything disappointing about it so far, it's that there just simply hasn't been enough players. At most I've seen a little over two thousand playing online at peak. This in turn keeps a lot of game types out of the rotation and is kind of a major bummer. I'm going to assume a lot of players will show up after Christmas, so for now I guess I'll take it easy and hope I don't get trampled too much.

The Zombies mode has taken on an almost Left 4 Dead feel, but with a lot more options for players to succeed. Earning points and trading them for weapons is intuitive and easy to pick up, the maps themselves are kind of all over the place though. The bus terminal in particular seems like a hot mess, literally, there's lava everywhere as players get on a bus bound for some odd locations. The furthest I've made it on that map was only to the small science installation at about eight rounds in. The other maps are equally varied, though I wish I could say the same for the vocal cues. These things get old really quick -- I mean, I turned them off after almost two rounds. I get the desire to be campy and corny on purpose but these quips by the characters are just downright bad.

I figured that the Wii U release of Call of Duty Black Ops 2 was just going to be a quick and dirty port, but I'm glad that I find myself completely wrong in this regard. I picked this game up for the Xbox 360 as well and find myself more interested in playing on Wii U, if only for the gamepad functionality. Even though it damages the game's visuals a tiny bit, it's quite enjoyable to play on the gamepad, and being able to share the online experience with another friend in the room is a great bonus. I'm bummed that the gamepad's touchscreen isn't used in Strike Force mode; it could have made that a real stand-out exclusive for this version of the game. As it stands, the mode is still enjoyable, but to imagine what could have been. Call of Duty Black Ops 2 is a great pick-up for anyone in need of a quality FPS to go with their new Wii U. Hell, it's a great game in general. After being disappointed with how quickly Modern Warfare 3 fell out of my personal rotation, it's nice to feel like I can enjoy this series again.
I almost prefer the Wii U version of Black Ops 2 over any other; the gamepad feels great to play with, and being able to play online with another person is a great feature.