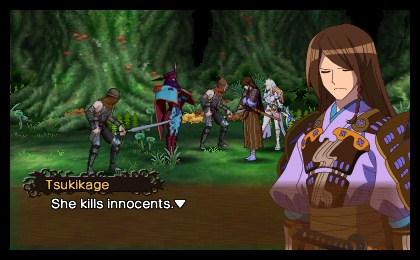 Written by Matt Mirkovich on 10/25/2012 for 3DS
More On: Code of Princess
The brawler and beat-em-up genres run a tricky gauntlet of criticism. Too much of the same thing can be a bad thing, like in the recent One Piece: Pirate Warriors. On the flip side, if a good idea doesn't have enough content, it is criticized in the same manner, like Double Dragon: Neon. Then there are titles that seem bulletproof, like Guardian Heroes. It is really hard to find anyone with something negative to say about that game. So when a collection of developers that worked on Guardian Heroes give it another go with Code of Princess, does it automatically get a free pass with gamers? I think rose-tinted glasses need to be avoided when playing Agatsuma Entertainment's Code of Princess, because while it is an enjoyable game it does have a couple of flaws lingering over from Guardian Heroes.

Atlus's penchant for stellar translation work is once again on display in Code of Princess, telling the tale of Solange Blanchefleur de Lux, the Princess of DeLuxia (that's a mouthful). Her family has been thrown out in to the street by Queen Distiny after a cadre of monsters stormed the surrounding village and Distiny's promise to rid the town of monsters has convinced the townspeople that the de Lux family has got to go. Armed with the DeLuxcalibur and some of the skimpiest armor around (what is the rule? The power of armor is inversely proportional to the amount of skin it covers?), Solange and her friends must defeat Queen Distiny and ultimately save the world. The game has a bit of an M. Night Shyamalan twist at the ending that is cool, but ultimately it's the cast of interesting characters that make the story great. From Solange's unflappable optimism to Zozo's monotone attitude, each character feels unique.

That uniqueness extends to gameplay as well. With over 50 characters to choose from, there is going to be someone for everyone. A lot of the characters are monsters that are fought throughout the game, but there are also a few bit characters who seem ridiculously out of place, but are just cool to play as, like Eluda the tavern owner. Her move set is incredibly limited compared to other characters but she can be terrifyingly powerful when set up correctly. Meanwhile, there are a number of joke characters, like the Old Man who has only two moves and cannot block or dash at all, making him a tremendous challenge to master. Most characters have a fair number of moves that range from simple presses of the B button to quarter-circle motions using the D-Pad or analog stick in combination with A or B. This control setup is repetitive but keeps things from being needlessly complex, and each character has different attacks resulting from these inputs. One of the reasons this succeeds, though, is due to the length of the missions players will be undertaking.

The story and post-game is composed of missions that are little meaty chunks of gameplay. There are 30 missions for the main story, and then another 30 bonus missions unlock as players progress. These missions don't take more than a few minutes to complete at a time, and all revolve around defeating a number of enemies and sometimes protecting a random villager. The short nature of these missions makes it easy to try out each unlockable character, and leveling them up allows players to allocate stat points to improve their hit points, attack power, attack speed, and defense. So while each character has the same move set, the moves themselves offer up enough variety to make each character feel at least somewhat different. The only downer here is that characters can only level up if a stage is completed. Failing at any point in the mission results in no gains which can be disheartening at times, as I ran into a few missions where Solange wasn't powerful enough for a boss fight. Taking her to some of the unlocked bonus missions remedied that, but the star rating system that indicates difficulty sometimes does not accurately convey how hard a mission can be (I'm looking at you, The Little Witch mission). There is also a store that carries a number of items that can be purchased to power up any of the characters. Some of the weaponry and armor is limited to who it can be used by, but the amount of items is large and can really help push a character in the 'broken' tier of power. 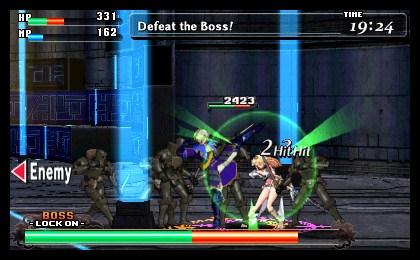 Code of Princess is a good-looking game. The 3D models almost come off as 2D in appearance and are animated beautifully. The colorful artwork of Kinu Nishimura also translates well into the game's visuals. The 3D feature isn't much to rave about, though it does make it easier to distinguish what plane the enemies rest on. Like Guardian Heroes, Code of Princess allows players to jump between lanes to avoid enemy attacks. Also like Guardian Heroes, this game can suffer from incredible amounts of slowdown when there are too many enemies on screen coupled with some of the magic effects. This results in single-digit frames on a number of occasions, and watching the credits is really depressing because it seems to show the game running at a perfect 60 frames per second. I want whatever hardware the game was running on when that gameplay footage was captured.

The audio ranges from dull to memorable. I got really sick of some of the music during combat just because I was constantly hearing the same tracks. But one song I could never get tired of was the theme of Marco Neko which played whenever I'd visit his shop. It had a weird, TV infomercial vibe about it that I was digging. The voice acting is spot on. Laura Bailey nails the perpetually perky Solange, and Michelle Ruff has just the right level of doom and gloom in her portrayal of Zozo the necromancer. The rest of the cast pulls off their characters well, which is typical for the studio that Atlus employs for their games. 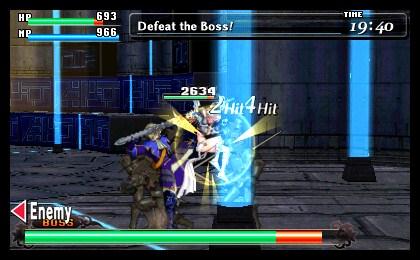 There's local and online multiplayer for those who like to game in groups. Taking the game online is a bit of a challenge just because I wasn't able to find very many games. Even hosting games I rarely got someone to join in. Thankfully it is easy to start a game with CPU players to replace normal players, or it's possible to go for the glory and run the stages alone, though these stages are a lot harder thanks to the increased number of monsters.

Code of Princess is a solid effort from Atlus and Agatsuma Entertainment. Its bite-sized mission structure makes it a perfect portable game, even if the majority of missions don't have much difference to them. The sheer number of characters offer a bit of variety and challenge, though gradually this game will get to the point where it feels like a grindfest and it simply stops being worth it. I found myself having a great deal of fun with the game, and after taking about a good eight hours to get through the story I was still eager to try out the online mode and bonus missions. I recommend Code of Princess because it's something new to play on the 3DS, has an endearing charm much like Solange's infallible cheeriness, and is a great deal of fun for a good while. It's easy to see that this was a labor of love for Agatsuma Entertainment, and here's to hoping they can keep making games like this, for they don't come along often.
It's got a couple of nagging issues, but Code of Princess has a fun story, a bevy of characters, and a lot of heart.