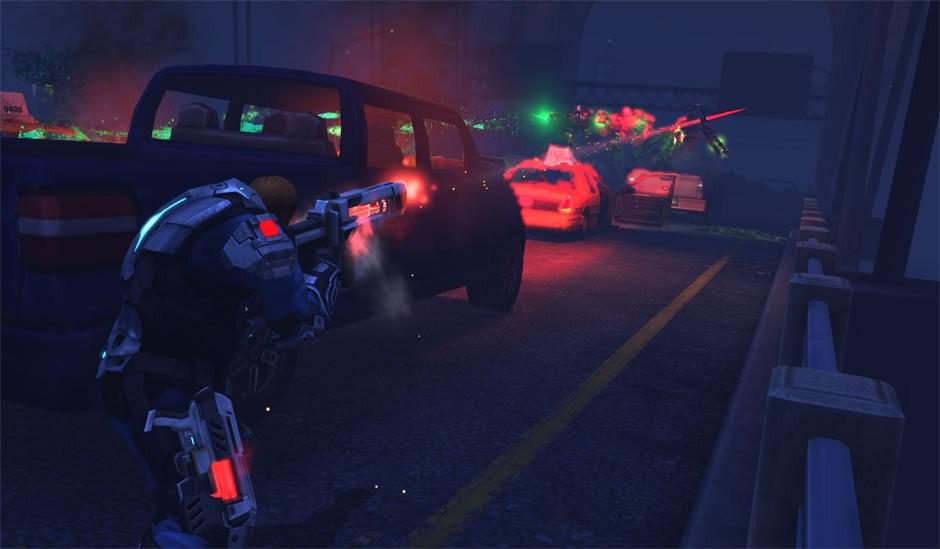 Written by Cyril Lachel on 10/8/2012 for PS3
More On: XCOM: Enemy Unknown
Considering the importance of the mission, there aren't very many people working at XCOM.  I know because not only did I hire them, but I spent a few minutes to customize each and every one.  I tell them what I want to be researched and they make the weapons that keep the Earth safe.  I have less than thirty soldiers working with me, but each and every one of them is a blood-thirsty killing machine.  If you don't include the janitors, there are only a hundred people working in my North American headquarters.

We're one of those units where everybody knows each other.  Some of my soldiers have been with me since the very beginning.  I've watched them grow and together we've saved the world from certain doom countless times.  And that's why it hurts so much when somebody on my team dies.  This isn't some red shirt nobody, this is Don Rock, a solider that fought heroically in more than two dozen missions.  I'm not afraid to shed a tear, because unlike most games, when you die in XCOM you stay dead. 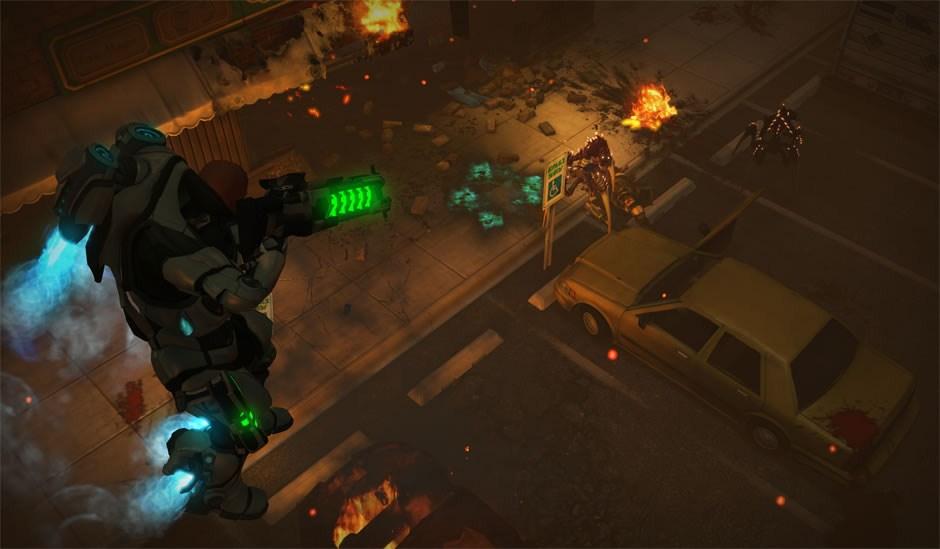 Based on a classic 1995 PC game (which was also ported to the original PlayStation), XCOM: Enemy Unknown is a retelling of sorts.  Much like the original, you take control of a command station whose only mission is to rid the planet of an ever-increasing alien attack.  You do this by shooting down UFOs, capturing aliens, researching their technologies and selling extra-terrestrial goodies on the grey market.  Along the way you'll figure out what they want and how to stop the infestation once and for all.

But let's not get ahead of ourselves.  XCOM has several layers and it's important to give each of them proper attention.  At its core, this is a turn-based strategy game.  It's a bit like Final Fantasy Tactics, only with laser rifles instead of swords.  You control a squad of six soldiers as they hunt down aliens through office buildings, forests, underground bunkers, the city streets, farms and all kinds of other scenic locales.  Both sides take turns until either you've defeated the alien scum or died trying.

Each soldier gets a total of two moves, which can be used a number of different ways.  For example, it might be smart to use one move to locate some sort of cover and then use the other move to target an alien.  Player may choose to forgo the action all together and run a great distance across the level.  You can also use a move to go into a defensive position, which will force your soldier to shoot at all aliens that run past their line of vision. 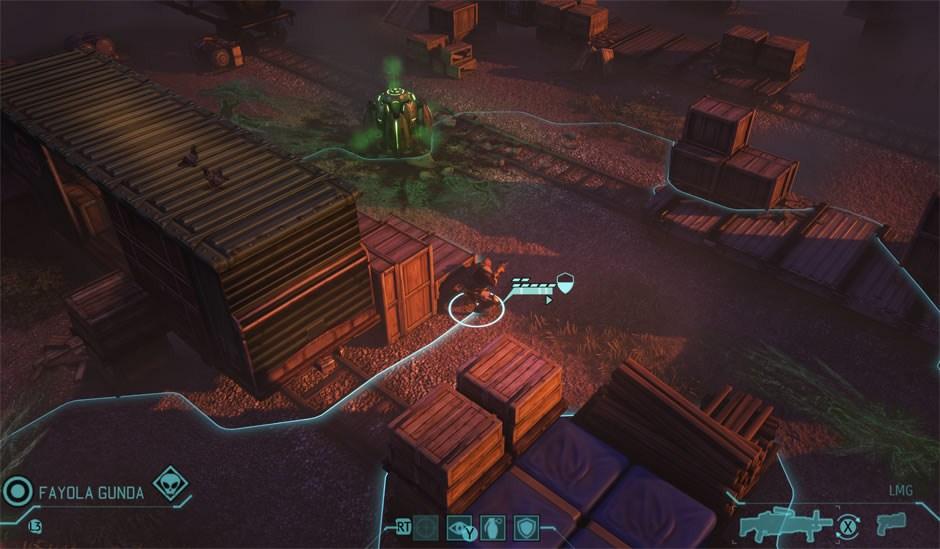 The scary part is that you don't know what you're facing when you touch down at a waypoint.  The only thing visible is what is directly in front of you, and even that doesn't tell the full story.  The levels are large, often with houses and stores the aliens could be hiding in.  If you're not careful you'll quickly be swarmed on all sides, and then you'll find most of your team going home in body bags.  And like I said, when somebody dies, they stay dead.

You want these soldiers to stay alive as long as possible ... and not just because hiring new recruits is expensive.  As your squad kills aliens and survives missions, they'll level up their stats and advance through the ranks.  With each promotion they'll be given some sort of perk.  For example, the support soldiers will be able to hold three med packs at the same time, while the heavy fire soldiers are now able to fire twice in a single turn.  When one of these soldiers dies it leaves a big hole, one that is not easily replaced.  In that sense, XCOM does an excellent job of demonstrating how important experience is on the battlefield.

When you're not battling aliens, you'll be spending all of your time balancing the budget of command central.  Now you're in charge of what the scientists research, which parts the engineers make and how well trained the soldiers are.  Suddenly you start to see the bigger picture, which involves a league of nations spending money to make sure their borders stay alien-free. 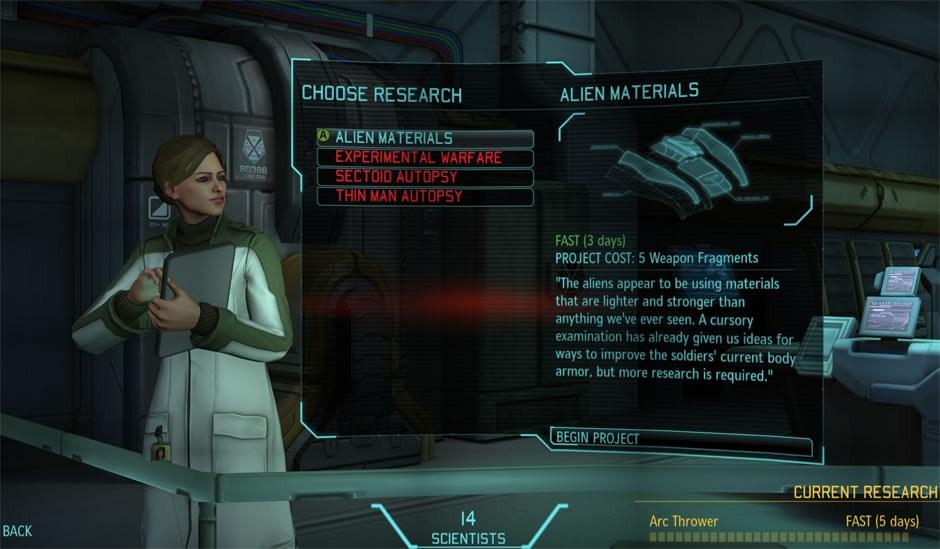 This is where XCOM becomes a juggling act.  The idea is to please everybody all of the time.  But that's impossible, and eventually you'll find some of the countries begin to peel off.  Losing a few countries is no big deal, but don't let that be a habit.  If too many counties pull their support, the XCOM project will be shut down and your game will be over.

As you research new technologies, your engineers will be able to build onto the existing base.  You'll start with the bare essentials, but before long you'll build a room to house living aliens, a foundry to research weapon upgrades and satellite uplink rooms.  The idea is to keep adding satellites to the sky, that way you can monitor alien activities before it's too late.  Unfortunately, all of these projects will take time and money.

While you wait for everybody to complete their jobs, you'll take on missions around the world.  A lot of your missions will involve you reacting to a call for help, but there are a few variations on this theme.  Sometimes you'll need to shoot a UFO out of the sky, resulting in a mission where you're sifting through the wreckage.  Other missions will involve civilians to save.  Unfortunately, the aliens will kill these innocent people with each turn, so you better hurry.  There are also escort missions to contend with, along with a few missions involving defusing bombs.  But even with all these distractions, the core fundamentals are almost always the same -- kill all of the aliens. 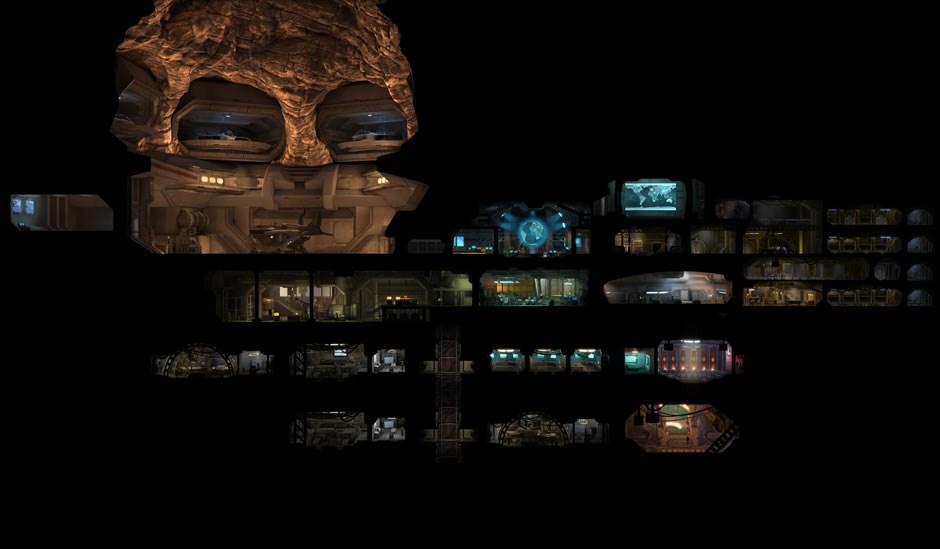 The game comes with more than seventy missions, though they won't always play out the same way.  After spending four hours with the game, I decided to take everything I had learned and apply it to a brand new game.  I was amazed that none of the missions were repeated; the narrative simply got shoehorned into completely different stages.  With so many random variables, it seems perfectly reasonable to play through this game a second time and have an entirely different experience.

Unsurprisingly, XCOM has a nice variety of aliens to fight.  You get the little green men we've seen in all those movies, as well as aliens that look like very weird thin men.  Another type of alien is a transforming disc.  There are heavily armored aliens, flying aliens and an especially illusive alien that disappears.  And we haven't even talked about the alien that turns other people into zombies.  Just when you think the game is done throwing new enemies your way, an even bigger and scarier one will show up.

With so many different mechanics and systems at work, you might imagine a game full of endless menus and a complicated control set-up.  Think again, because Firaxis has managed to create a streamlined experience that is accessible to gamers of all experience levels.  The squad tactics aren't so overly complicated that players feel overwhelmed, yet they aren't so simple that it feels dumbed down.  All of the needless garbage that dogged this style of game for so long (cluttered menus, manually hitting the end turn button, etc.) has been edited out, replaced with a natural experience that won't scare people off.  XCOM has all of the shortcuts and tricks you expect from a modern video game. 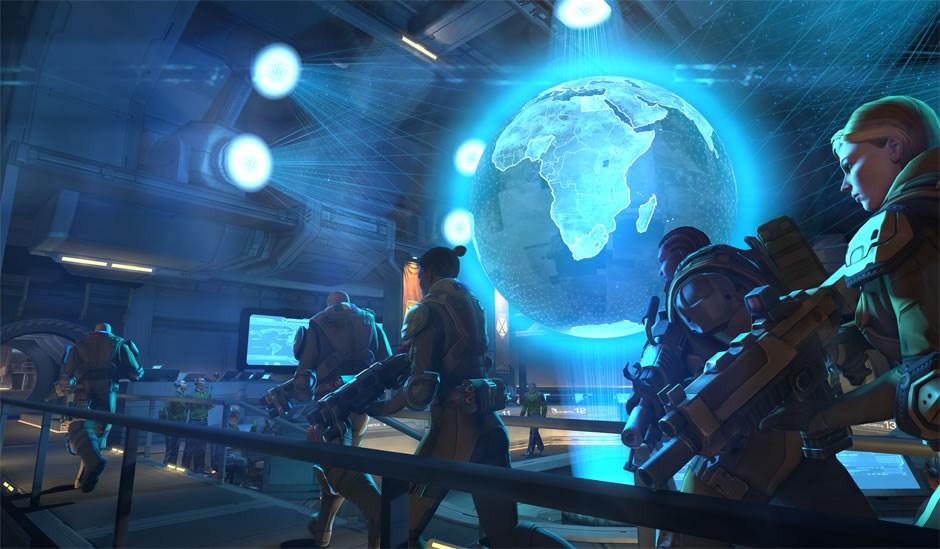 Of course, you wouldn't know that just by looking at it.  The game is full of so many cinematic flourishes that you may start to think the whole thing is one long cut scene.  Even the simple act of shooting at an alien looks like it's straight out of Mass Effect.  You'll see your character smash his body up against safety and close-ups of aliens scattering.  On the other side of the level is an alien ripping a civilian in two, but don't worry because one of my squad mates dramatically jumps through the window to save the day.  It may be a turn-based strategy game, but it's just as exciting as Gears of War.

Unfortunately, XCOM does have a few technical problems in its presentation.  There are too many scenes to count that involve a frame rate that chugs to a halt, creating some iffy looking cinemas.  Other times you get the characters clipping through walls.  These problems in most games would be a deal breaker, but they somehow don't negatively impact XCOM.  Sure it sometimes looks bad, but the gameplay never suffers.  Even with some dropped frames and sluggish animation, the game is a blast to play from beginning to end.

How long it takes you to beat is entirely up to you.  If you only focus on the main quest and know what you're doing, you'll be able to power through this in around fifteen hours.  Everybody else should expect an adventure of thirty hours or more.  The missions themselves can range from less than ten minutes to well over an hour.  I had one especially grueling mission take close to two hours to complete.  On the other hand, you could totally screw things up and lose control of the planet in just a few hours. 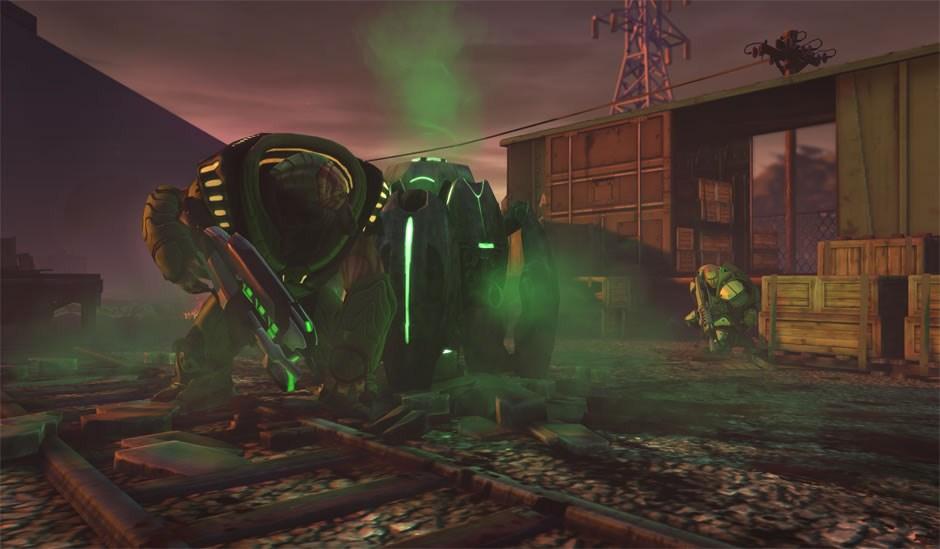 In an interesting move, Firaxis decided to include a one-on-one multiplayer mode.  Although bare bones in design, this two-player fight is full of promise.  Each player spends points to buy a team which includes both humans and aliens.  From there it plays out a lot like a standard XCOM match, with both players taking turns trying to kill each other.  The addition of alien characters is a nice change of pace, though there isn't a whole lot to this mode.

XCOM is the classic video game reboot I've been waiting for.  As a longtime fan of the series, I'm delighted by the streamlined execution and cinematic flourishes.  The fact that your character can die at any moment makes every battle both exhilarating and terrifying.  Some of the deaths in this game are the kind of heartbreaking that movies are based on.  That kind of emotion is rare in a video game, especially a turn-based strategy game.  But that's what makes XCOM one of the best games of the year.

XCOM: Enemy Unknown is an expertly crafted strategy game that improves on the original in every way. It's a cinematic treat that is accessible enough for gamers of all experience. Best of all, it's not a bore. With more than 70 missions and a competitive two-player mode, XCOM is a high water mark for 2012!