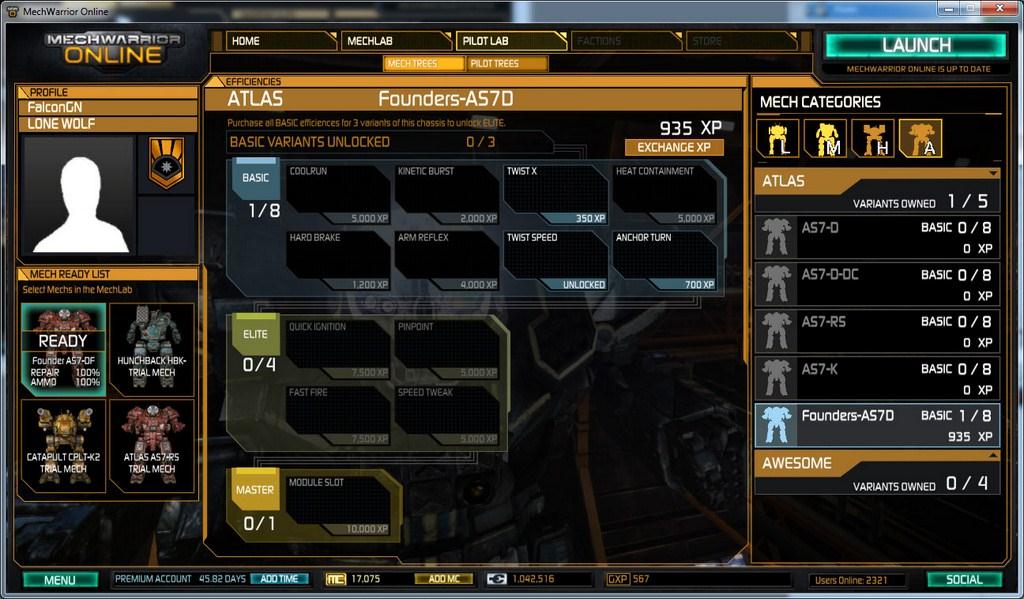 Written by Ben Berry on 10/3/2012 for PC
More On: MechWarrior Online
“He's a one trick pony , One trick is all that horse can do
He does one trick only, It's the principal source of his revenue
And when he steps into the spotlight, You can feel the heat of his heart
Come rising through”
-          One Trick Pony, Paul Simon, 1980

The song reference above might be a new one to some of you but it’s a 32 year old song with a simple message: “pick one thing to do, and do it really well”. Pirahna Games clearly took that to heart when making Mechwarrior Online; with one game mode, a handful of maps, and a single life per round (you don’t respawn when you’ve been killed which  can lead to some long wait times until the next match ), it could be a "less than good" experience.

First there’s the graphics. They’re extremely good; as in very, very good as the game uses almost everything that the CryEngine 3 has to offer. There’s still some jumpiness from fast moving mechs that could be cleaned up during the final pushes through beta, but other than that, the graphics are crisp, the mech models are extremely detailed, and there are cool graphical touches abound (nothing like the sight of massive volleys of missile fire early on in a match).. 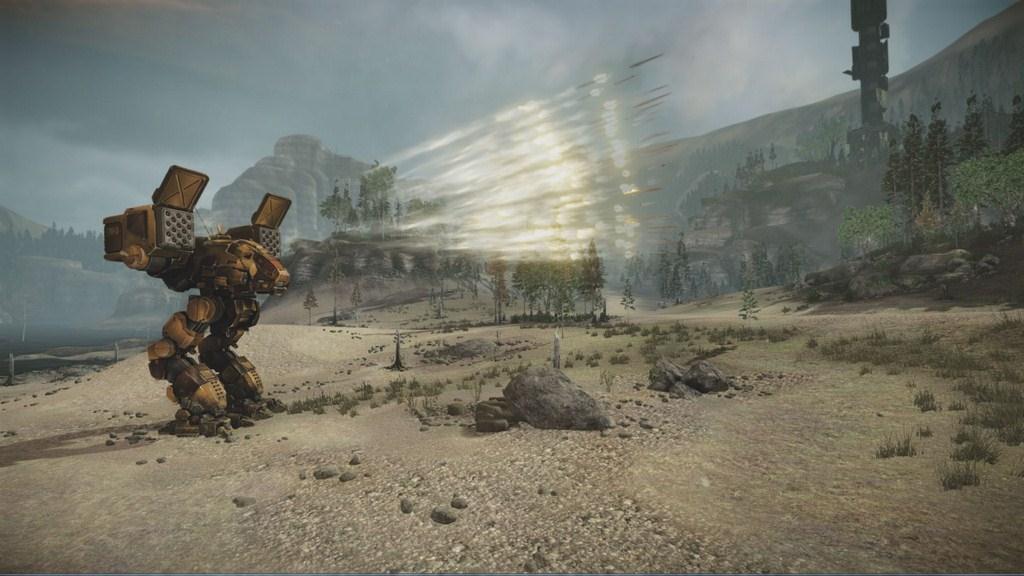 Of course to get around the map and shoot the other teams mechs, you need to master the controls. The controls are mostly straight forward, almost minimalist FPS controls. They are fully customizable but the primary mapping should feel very comfortable to just about anyone who has played a combat-based game in the past 10 years. While the controls will feel comfortable, there’s also a complexity to them that goes beyond the difficulty of strafing in most FPS'; it definitely took me a while to get comfortable with adjusting throttle between forwards and backwards while adjusting the direction of the mechs walk and keeping the upper body of the vehicle pointed at the target.  It doesn't help that the controls are reversed when backing your mech up but once you get used to it it is all gravy.

The combat is of course where it’s really at with this game: two teams of mechs squaring off in combat. There are a couple of different ways to win each 15 minute match; you can either blast away at the other team until they are nothing  but  charred metallic corpses, or you can attempt to capture the enemy's base. The game is ideally suited for teams working with a chat tool, coordinating assaults across a map of varied terrain. However, in closed beta, I played entirely with folks I didn’t know, and I don’t mind telling you that I was the first person to die in many of the matches I was in. 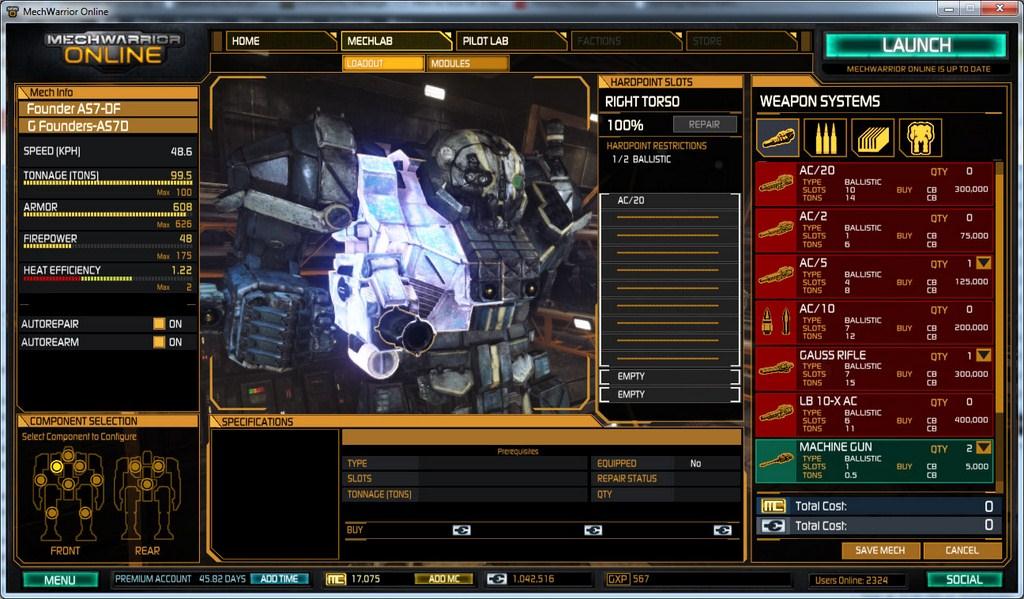 That all started to change when I got involved in the portion of the game that will pay for all of your hard work: the mech and pilot customization system. Like most of the F2P games out there today, you charge some amount to your credit card in exchange for tokens for the in-game store. Those tokens buy you different mech chassis which offer different configurations of weapons and defensive attachment points to fit to various gaming skill sets. You can still buy new mechs with in-game currency but it will take a lot of playing before you can afford a new mech.

I found my skill set was in firing long range weapons from just inside the range of my missiles and then getting the heck out of the way. There are several types of mechs with different variations.  Each variation is built for a specific types of combat. For example the catapult mechs have several variations that are built about engaging enemies at long distance with long range missiles and variations where those missile pods are replaced with powerful projectile and laser based weapons for close range combat.

The mech lab isn't all lasers and missiles though as it is also where you configure the armor, engine, and heat sinks on your mech.  Armor can be added and removed from every section of the mech so that you can remove some armor if you want to squeeze one last weapon on or added it if you find a weak spot that is constantly being exploited. 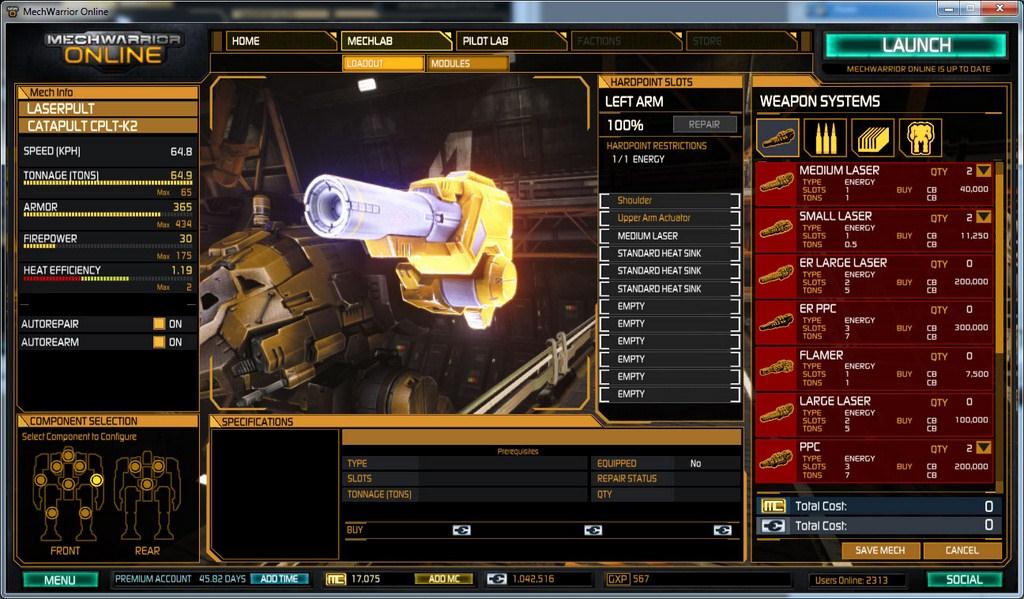 Heat is a big part of the game and your mechs have to be able to dissipate heat in order to function correctly.  So while that Atlas mech that is loaded to the gills with Large Lasers may seem impressive, it's not that good when the mech has to shutdown after firing twice because it can't handle the heat generated by the firepower.  Certain maps of the game will emphasize this as the game includes frosty snow levels as well as hot lava worlds.

Beyond upgrading the armor and weapons you can also upgrade the skills of your pilot. What’s interesting is that at least to this point, you cannot purchase pilot upgrades, you earn them through experience gained in combat. The better you, and your team do, the more experience you get, the faster you advance. I personally have not been advancing very fast, because even with new mechs, I’m still dying early in combat.

That brings us to the one issue I have with the game; when you die in a match, you’re dead. No respawns, which means you get to sit and watch everyone else in your game until a base gets taken or one team or the other is all dead. Hopefully that happens faster than the 15 minute timer for the round, or else you just get to sit there. .

(Update) - We received word from the PR team that this is a known bug in the current beta and has already been fixed.  Currently if you do leave a match before it ends you  do get credit and experience points if you leave early, it just doesn't show up until the next round or time you restart the game.

There’s so much that can change between closed beta and release date, but from everything I’ve seen so far, Mechwarrior Online is a winner, even if it is just a one trick pony.