Indie Spotlight: Sir, You Are Being Hunted

Written by Travis Huinker on 8/31/2012 for PC
More On: Sir, You Are Being Hunted Indie Spotlight
Indie Spotlight is a weekly article series at Gaming Nexus that explore the origin and development of unique and innovative games designed and produced by teams of independent developers. Each article includes a developer interview that focuses on examining the concept and design processes involved with each project. Indie Spotlight strives to showcase new and upcoming games that range from a variety of genres and development studios across the world.

British aristocracy, exploration, hunting, and robots are elements not commonly connected with one another in well, any type of media to be honest. Sir, You Are Being Hunted from developer Big Robot has set forth creating a game that incorporates each of the aforementioned elements, which prove to be quite an unique and enthralling concept. With the use of an in-house built procedural-world generation engine, the game's environments are created with the use of math and various algorithms while mimicking the visual style of a British rural countryside. Both the game's premise and technology used for its development combine for one of next year's most promising independent games to follow during its development.

Other games developed by Big Robot in the past have shared the same elements of genuine creativity and boldness in their design. With an array of media released thus far ranging from developer blogs and screenshots focusing on the development process, Big Robot Founder and Rock, Paper, Shotgun Writer Jim Rossignol provided more in-depth information on the procedural-world generation engine, in addition to revealing more details about the gameplay of Sir, You Are Being Hunted.

Interview with Jim Rossignol
Could you introduce yourself and talk about your various roles with the development of Sir, You Are Being Hunted?
My main role has simply been organizing the project. Tom Betts and Dan Puzey have handled the programming, while James Carey has done much of the design. My role has been one of making sure we're working on the right things, making sure the game is fun and interesting, and making sure people get paid.

Can you provide a brief history of Big Robot? How was the studio formed and what games have you released thus far? Are there any other games that you have in production?
Big Robot is a three man core team, with a few part-time additions. We came together a couple of years ago to work on a game for the UK television company, Channel 4. That was called Fallen City, which is a free, educational game that can be downloaded direct from their website. It was a full 3D action puzzle game about fixing cities, and we were pretty pleased with how that turned out. Since then we've released a generative music game called AVSEQ, and are now working on Sir, You Are Being Hunted.

The gameplay has simply been described as open world survival in a first-person perspective, can you provide further details about the premise or narrative? What goals or objectives are in place for players?
The game is set on a series of islands, which are generated by our game engine. The objective for the player is to find a way off these islands without being killed by the various antagonists that pursue them. The player will need to find equipment that will help him do that, and will need to loot buildings to scrape together the things they need to survive. The end of the game will be the player escaping from the island.


With "Hunted" part of the game's title and mentioned frequently in descriptions, how does hunting function as an aspect of gameplay for the player?
Each island is wide open, and you can go where ever you like. However, the island is being patrolled by hunters and their dogs - they're looking for you. If they see you they'll come after you, and you'll need to hide or escape. Even once they've lost you, the robots will search the area they last saw you in, meaning that keeping your distance and watching the terrain ahead of you (and behind you!) is critical to success. There are chances to fight back, however, as you'll be able to steal weapons from the robots if they get brought down.

Could you talk about the robots in the game a bit? What is their motivation and why are they hunting the player down?
We're pretty much leaving that unexplained, although there is a set of clues to be found within the game world. I think too much exposition can damage the feel of a game like this, where much of what is going on is a mystery. The robots themselves are caricatures of British aristocracy - a class of society which enjoys a bit of bloodsport. The main antagonists are the well dressed Hunter robots, but there are also hounds, trap-wielding poachers, and the enormous, malevolent Squire. (Which we've yet to reveal.)

What were some of the reasons behind selecting Unity as the game's engine? How has the engine been modified to function with the project?
The main reason for selecting it was that we were already familiar with it. Unity has a number of issues, but price and ease of use meant it was the default choice for us. The engine hasn't been modified by us specifically, but we have of course plugged in our own terrain engine to produce the landscapes which make up our levels. 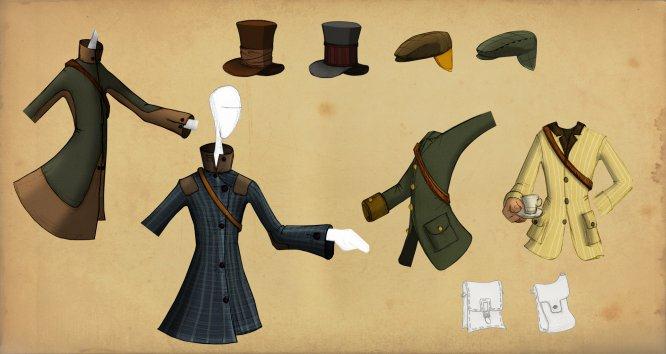 In regards to the British Countryside Generator, what have been some obstacles, triumphs, and any unexpected surprises during the development of a procedural-world engine? What are the trade-offs of using a procedurally generated world instead of a manually crafted one?
There are always surprises in procedural generation, just by the nature of its complexity. Small changes in variables can have huge outcomes for what is produced, so we're constantly working with it, and studying what works, and what doesn't. One haywire moment, for example, made us look at how messy woodland was - a messier woodland environment actually looks more natural than the one we had generated initially. The advantage is that we can make huge levels in 10 seconds. The trade off is a lack of control. There's nothing we can do to define exactly how a level will look. That means you have to just trust in your math. Fortunately Tom is a kind of magical numbers wizard, so the numbers are good.

With the engine's ability to generate an assortment of environments, can you provide further detail on the customization options that are available? Are any of those made available to players?
We're planning to make some manner of island-generation tool available for players to make their own. The options will consist in a number of variables and region types, so that players will be able to decide whether they want entirely forest islands, or rolling fields, or any mix of the various different terrain types we're going to include. This will mean players can generate islands that are entirely unique to them and explore a landscape no one else has ever seen.

The style of the game is called "Tweedpunk," could you define that for us and talk about what things make the game "Tweedpunk"?
Well, that's really a bit of a joke that has gone too far. We were trying to think of a phrase that summed it up, and the "-punk" suffix always amused us when it was applied to inappropriate things. But actually it seems to work: it's the science fiction and mythology of British countryside, with all its obsession with the past connected to a dark (and silly) sci-fi future.

Does the gameplay just revolve around a single-player experience or are there any plans for possible co-operative/competitive multiplayer?
We don't really have the resources to tackle a multiplayer version of the game right now. It's possible, and we'd like to do it, but whether we create a co-op version depends on whether the game is popular enough to warrant us sinking the considerable time that would take into it.

As a founder and creator of an independent studio and projects, what advice would give to others wishing to pursue the same path?
My position is almost entirely unique, so I don't feel enormously comfortable giving advice to people who are trying to enter the field.
I suppose the most important thing I have learned from this and running RPS is that it's worth doing things properly. Tackle the business stuff, even if it doesn't seem like "your thing". To do what you love for a living means committing to every aspect of it, and having the willpower to make it happen.

Is there anything we missed that you would like to mention about Sir, You Are Being Hunted?
I don't think so, but we're not quite finished revealing the content that players can expect to see in Sir. Our blog and forum will be update with the news in the coming months.

Few independent studios risk the challenge of creating entire open worlds for exploration and even fewer that create games based upon British aristocracy. The procedural-world engine system alone deserves further reading in which the developers at Big Robot  provide further details of how the British countryside is generated using the wonders of math. With clues yet to be solved concerning various aspects of the gameplay and narrative, any future news regarding the most interesting and enthralling development of Sir, You Are Being Hunted will be awaited with eager anticipation.

Sir, You Are Being Hunted will be available in 2013 for Windows PC.

Further information on Sir, You Are Being Hunted can be found on the official Big Robot blog.

We'd like to thank Jim for taking the time to answer our questions.