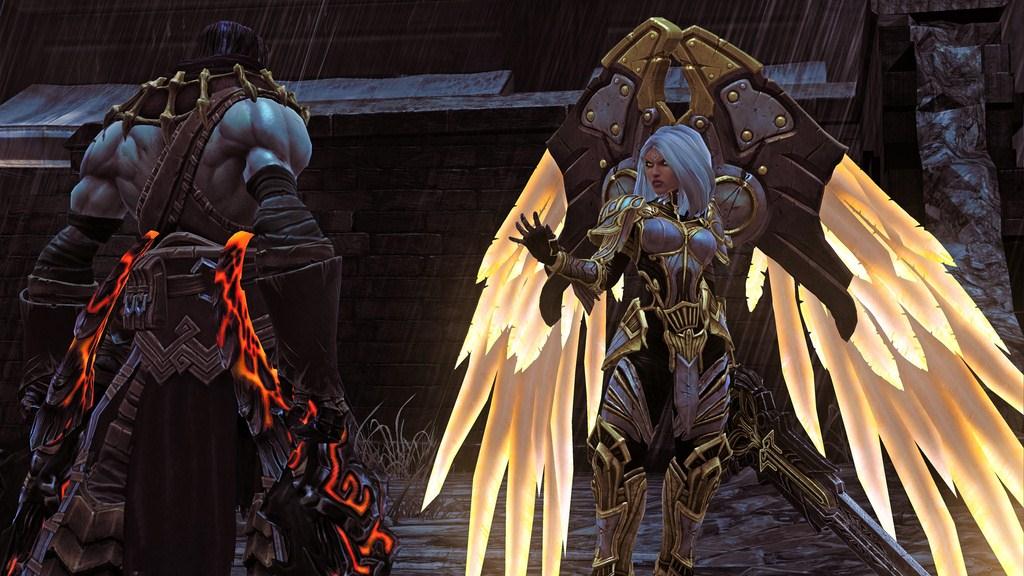 Written by Travis Huinker on 11/5/2012 for PC
More On: Darksiders II
The original Darksiders received an abundant amount of praise regarding its bold attempt at combining the gameplay of popular titles including Devil May Cry, God of War, and The Legend of Zelda, resulting in a thrilling mix of action, adventure, platforming, puzzle, and role-playing elements. The original's and sequel's most noteworthy feature is in players assuming the role of an individual member of the Four Horsemen of the Apocalypse. Previously, players assumed the role of War and partook in a quest that sought revenge against his various betrayers in Heaven and Hell that had him blamed for the unexpected Armageddon of humanity. With Darksiders 2, players switch from War to a far more brutal and interesting Horsemen: Death.

The narrative of Darksiders 2 takes place alongside the events of the original game with Death seeking to clear charges brought against his brother, War. The narrative's course eventually has Death battling the dark force of Corruption to save humanity itself, combined with travels to various worlds and encounters with a distinct cast of characters. Many references in both dialogue and cinematic scenes almost require a playthrough of the original game to completely understand events. Along with multiple quests, items to collect, and areas to explore, the sheer amount of content in Darksiders 2 is astounding. Even at the ten hour mark, I had barely scratched the content's surface.


Genre smorgasbord
The one element or well group of elements that I found most entertaining was the combination of gameplay genres ranging from platforming and puzzling to roleplaying and hack and slash. The sequel offers more exploration than the original with environments that are simply massive in scope. In the downtime between quests, there are a wide variety of additional tasks to discover, such as optional dungeons for exploration and hidden collectibles. Obsessive explorers will need to set aside an extended amount of time for discovering all of the hidden secrets in each world.

As well, the game's role-playing aspect places emphasis on building a more powerful Death by discovering loot and purchasing equipment from traders. Players can equip Death with various armor pieces from chest to leg armor along with new scythes and heavy weapons that include giant hammers and axes. Collecting loot and purchasing new gear is addictive, with Death becoming more powerful and, of course, deadlier. In typical role-playing tradition, Death can also earn experience and advance in levels that reward new abilities and skills for battle. One set of skills upgrade the Grim Reaper form of Death in which it can last longer and do more damage in combat. 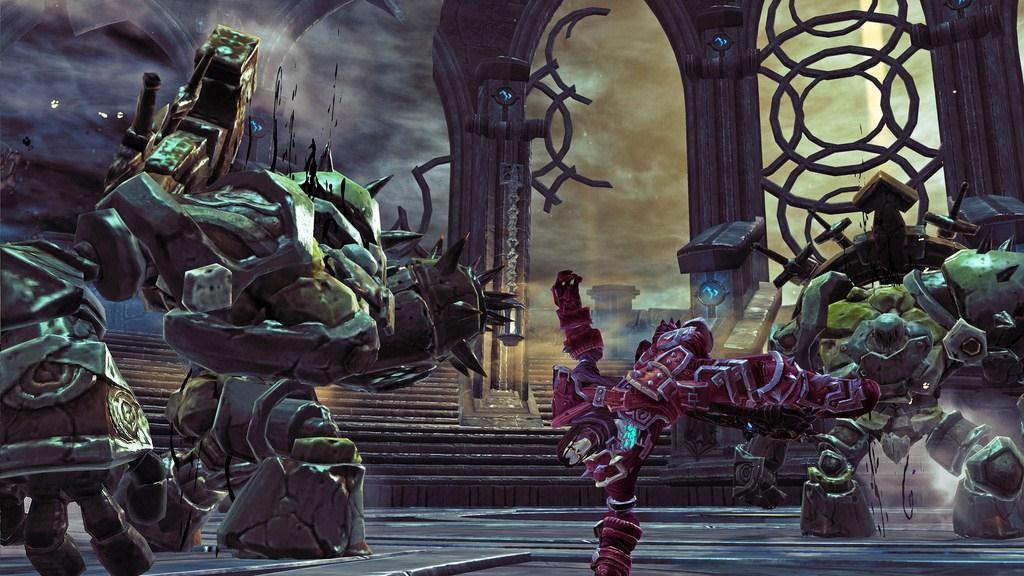 Dual scythe mayhem
Death is prepared for nearly every enemy encounter with an assortment of powerful weapons ranging from his furious dual scythes to a demonic revolver pistol. The intensity and brutality of combat truly shines when Death gets into the motion of combat and combos pile up one after another. With a combination of both light and heavy attacks, Death performs a range of combat moves leaving enemies with hardly a chance when performed in perfect execution.

Additional abilities gained during the narrative's course provide Death with even more ways in which to cause mayhem upon his enemies. The later skills allow Death to pull enemies in for a closer attack or keep them at a distance with his revolver pistol. The combination of Death's scythes and secondary weapon, along with an assortment of powerful abilities, enable players to craft their own style of destruction. The boss battles create even more hectic combat situations, with a few encounters resembling an epic scale originally introduced in Shadow of the Colossus. From various weapons and abilities to epic boss battles, Darksiders 2 continually provides highly-satisfying and thrilling hack-and-slash gameplay. 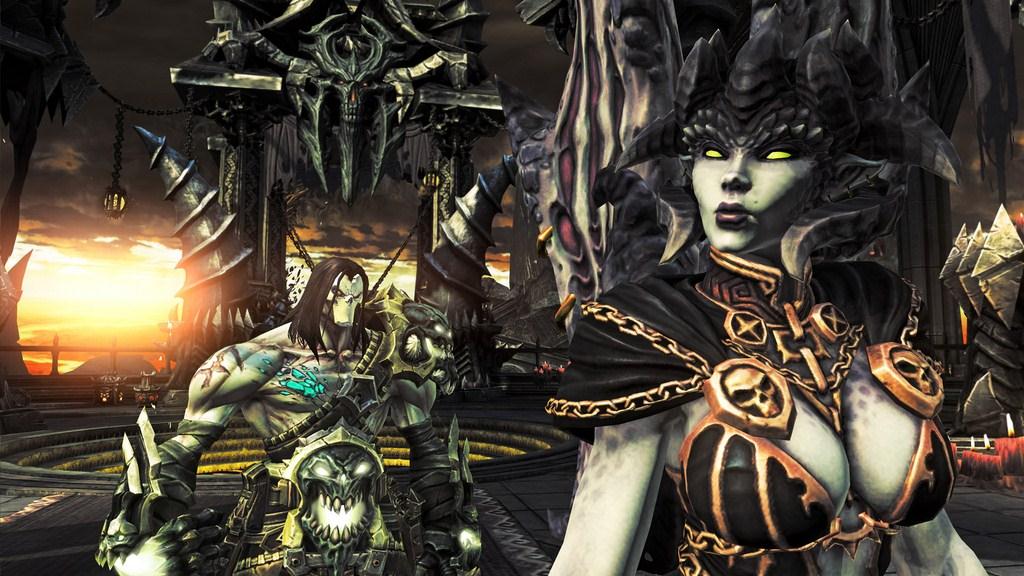 Certified dungeon explorer
My only major complaint with the gameplay is its over-emphasis on forcing players to navigate long and often tedious dungeons to advance the narrative. While some of the dungeons do offer entertaining puzzles and platforming sections, most repeat these elements without introducing anything new or original. The challenges presented in dungeons are often not that difficult, which result in them feeling more of a chore than a worthwhile gameplay experience. Even worse, the dungeons require a great deal of backtracking that artificially extend the game's length.

Being the badass that Death is, I continually wished dungeon segments were shortened and replaced with more chaotic battles. There is no denying that Death is an agile character that's quite capable of navigating difficult platforming sections, but his abilities are far more engaging to use in combat versus climbing walls and leaping from ledges.

Death meets his maker
While the majority of the Darksiders 2 experience on PC performs above average, even the Grim Reaper himself can't escape completely unscathed from some blatant port issues. Fortunately, the game has received an assortment of patches that fixed most of the severe launch issues that ranged from broken VSync support to a forced auto-centering camera. The developers had originally promised that the PC version would include graphics customization options, but were nonexistent at the PC launch. Even with the installed patches the game offers a limited selection of options, paling in comparison to other modern releases on the PC. 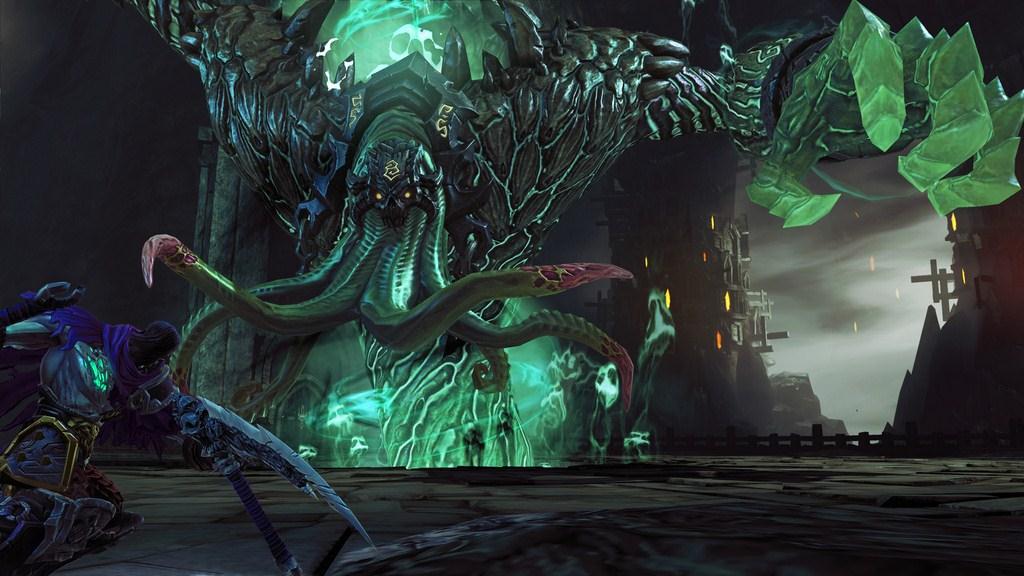 The major issue plaguing the PC version is the lack of advanced graphics options. With only a few options for toggling VSync and shadow quality, Darksiders 2 was transferred over to the PC with the fewest possible graphics enhancements possible, resulting in a game that doesn't utilize the added power of faster computer components. Aspects of the game's visuals ranging from textures to models show their lack of detail with the PC version's clarity in graphics. Even worse, no effort was made to provide the PC version with a higher resolution texture pack or options of any sort for enabling advanced graphics effects. There are simply no excuses for modern game releases on PC not to include customizable graphics options or at least take some advantage of the added hardware capability.

The amount of content and variety of genres included in Darksiders 2 will undoubtedly have gamers busy for quite awhile in their adventures as the capable and unforgiving Death. The focus of dual scythes as Death's primary tools of destruction result in a fluid combat system that makes each battle an engaging and thrilling experience. Unfortunately, the game distracts players from combat with often mundane and forced dungeons to navigate before continuing with the narrative. Many of the severe issues with the PC version have been solved through patches, yet some remain that include the lack of advanced graphics options and lackluster visuals. While the port issues that still exist with the PC version are disappointing, they provide more of a distraction than an obstacle in enjoying the otherwise highly-engrossing and content rich world of Darksiders 2.

Darksiders 2 is available now for Xbox 360, PlayStation 3, and Windows PC.
While the lack of advanced graphics options are disappointing, the core experience of Darksiders 2 remains intact with its assortment of gameplay genres and content rich world. Darksiders 2 on PC provides fans of the original and series newcomers with a seemingly endless amount of quests to complete and collectibles to discover, with the added bonus of Death himself as the protagonist.