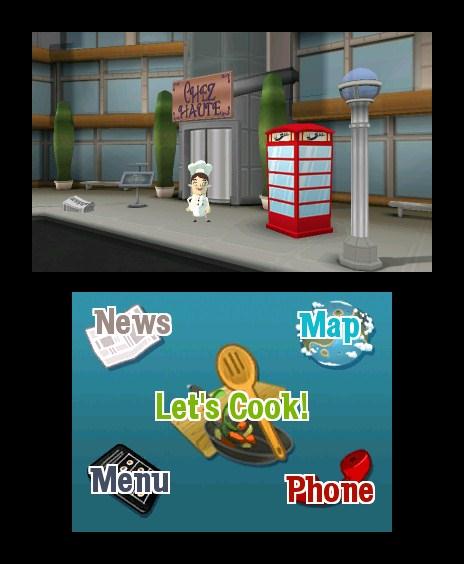 Written by Travis Huinker on 8/13/2012 for 3DS
More On: Order Up!
Order Up!! from SuperVillain Studios was originally released for the Nintendo Wii and has recently been ported over to a variety of other devices including iOS phones and tablets in addition to PlayStation 3 and Nintendo 3DS. With an extra exclamation added to its name and other various improvements, Order Up!! is now available as a downloadable game on the Nintendo eShop. The most significant changes to the game include use of the device's 3D capability along with support for hands-on or stylus controlled cooking on the touch screen. In addition, improved visuals and sound have been included in the 3DS version to complement the new hardware.

Players will begin their career by flipping burgers and cooking fries for customers in a fast food establishment that acts as the game's tutorial. The beginning of the game's chef's career is far from thrilling and will often have one hoping for more exciting gameplay challenges. After moving beyond serving customers through a window, players will have their first opportunity as a real chef in a small and grungy restaurant that serves an assortment of meals from pancakes to macaroni and cheese. The first restaurant serves as a continuation to the game's tutorial and still suffers from the occasional boredom. However, the experience becomes more exciting when aspects of managing multiple restaurants, adding spices, and hiring assistant chefs are introduced into gameplay.

Each restaurant introduces new dishes that require unique methods of preparation. With the more money earned, players can purchase upgrades for their kitchens including items such as faster ovens and more experienced assistant chefs. Once five stars are earned through various meal servings, health inspections, and food critic reviews, further restaurants are unlocked on the game's map. Each ingredient of a dish and the overall meal itself are rated based upon their preparation quality, added spices, and time in which served to the waiter. With the ability to prepare multiple ingredients at once, multitasking and time management are key for ensuring dishes are rated as perfect when sent to hungry customers. Fires can occur if certain ingredients are left unattended for too long, which results in a mini game requiring players to extinguish flames. Reaching five stars also requires frequent visits to the town market for buying additional special dishes and spices. From catching falling newspapers to slicing peppers, there are an assortment of mini games that are scattered around the game's world.

With the range of control inputs in the Nintendo 3DS, the actual gameplay doesn't fully utilize the system's extensive features. Touch input using fingers are near impossible, instead requiring a more precise control with the stylus. Swirling around ingredients in a pot or chopping vegetables are accomplished far quicker with a stylus and avoid accidental loss of connection to the screen. In comparison with other 3DS titles, the touch input often suffers from having to press multiple times to ensure an action is completed. Switching between meal preparations are often more difficult than the actions should be on a device with touch and button control inputs. The in-game menu lacks any sort of innovation resulting in overly time-consuming navigation. 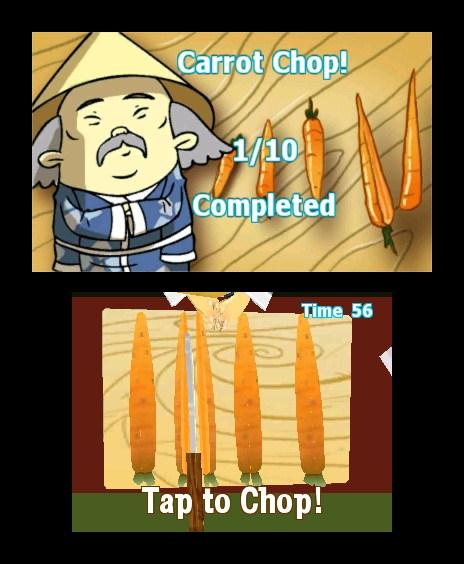 The handheld's 3D capability offers minor improvements to the gameplay and visuals with a barely noticeable increase in depth. Steam above grill tops or the action of manipulating meal ingredients receive most of the benefit from 3D-enabled visuals, but often is more useful to view when turned off during gameplay. Fortunately, the graphics have been improved for the 3DS version with crisp and clear visuals for the game's many characters and locations. The most noteworthy visual element is the game's various dishes and their individual ingredients that each have multiple states from perfectly cooked to poorly burnt. The game's exaggerated visual style pairs together well with the quirky selection of music tracks that offer a fresh atmosphere for each restaurant.

Preparation of dishes in Order Up!! suffers from occasional boredom when waiting for an ingredient to finish grilling or boiling, which is partially solved by changing restaurants or experimentation with spices. The game functions best when played in brief periods versus longer sessions that can grow tiresome with slow progression in the chef's career. Order Up!! is a perfect diversion for those times when a longer, more complex game on the 3DS is too bothersome. It remains relaxing throughout the game to sit down for a few minutes and prepare some meals with flawless execution. The controls and menu are not perfect by any means, but neither rarely affect the addictive and charming nature of Order Up!!

Order Up!! is available on the Nintendo eShop for $9.99.
While minor issues exist with the game's controls and 3D-enabled visuals, the majority of gameplay features have been significantly improved for the handheld experience. With its low asking price and extensive amount of content, Order Up!! will easily occupy numerous hours with preparing dishes and managing restaurants. Order Up!! delivers an addictive and charming gameplay experience that should be on the menu for both beginner and experienced chefs.