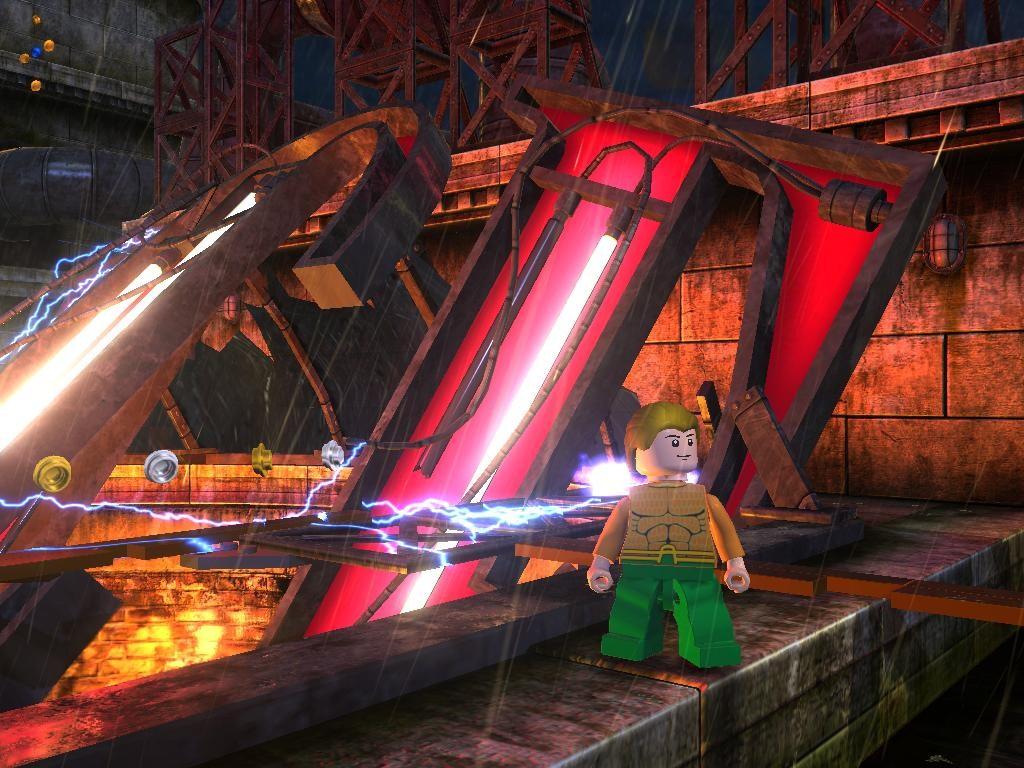 Written by Cyril Lachel on 7/11/2012 for 360
More On: LEGO Batman 2: DC Super Heroes
I'm starting to think that 2012 might be the year I overdose on super heroes.  At the theater it's nothing but comic book adaptations, including The Avengers, The Amazing Spider-man, The Dark Knight, Judge Dredd, Ghost Rider and Men in Black 3.  And it's not just movies, I recently went through Batman: Arkham City Game of the Year Edition and Pinball FX2: The Avengers Chronicles.  And now, just when I'm starting to crack, I have to go through LEGO Batman 2: DC Super Heroes.  I swear, as soon as summer ends I'm only going to watch grounded, coming-of-age indie dramas.

By my count this is the twelfth LEGO game based on a licensed property, a franchise that has taken us from Star Wars to Harry Potter to Pirates of the Caribbean.  LEGO Batman 2 doesn't stray too far from the tried and true (and stale) formula, but does offer an original storyline, some cool set pieces and dozens of characters to unlock.   Best of all, it sets up what will surely be the next big series -- LEGO Justice League.

Don't get too excited about the "DC Super Heroes" subtitle, because it's nothing more than a tease.  This is a Batman game first and foremost, even if a few other DC characters are sprinkled in towards the end.  The Joker has teamed up with Lex Luthor, who is sore from having just lost a prestigious award to billionaire playboy Bruce Wayne.  Together the two hatch a plan, which involves rigging an election, operating a giant mech and creating a weapon that will destroy LEGO creations brick by brick.  It's up to Batman and Robin to swoop in and save the day.

The storyline starts out promising enough, with the Joker breaking all of our favorite villains out of Arkham Asylum.  And then, just as quickly as they escaped, Batman catches them and throws them back behind bars.  That's when the game lets you know that the Joker wants your undivided attention, much to the detriment to the plot.

In LEGO Batman 2, gamers are tasked with fighting through 15 action-packed levels (plus one extremely cool bonus stage).  These stages take you through a number of popular Gotham City destinations, such as Arkham Asylum, Wayne Tower, Harley Quinn's carnival and the toxic chemical factory.  You'll even have a chance to fly over Gotham in your own Batwing.  Players will be asked to pilot a series of vehicles (including boats and cars) before the credits roll.

The levels themselves play out like a cross between Double Dragon and The Lost Vikings.  There are large chunks of time when you're doing little more than mashing the "X" button and collecting studs (the game's currency).  When you're not mindlessly beating up thugs that look like Ronald McDonald, you'll spend the rest of your time solving puzzles.  This means that both Batman and Robin will have to go through several costume changes in order to bypass the obstacles presented to you. 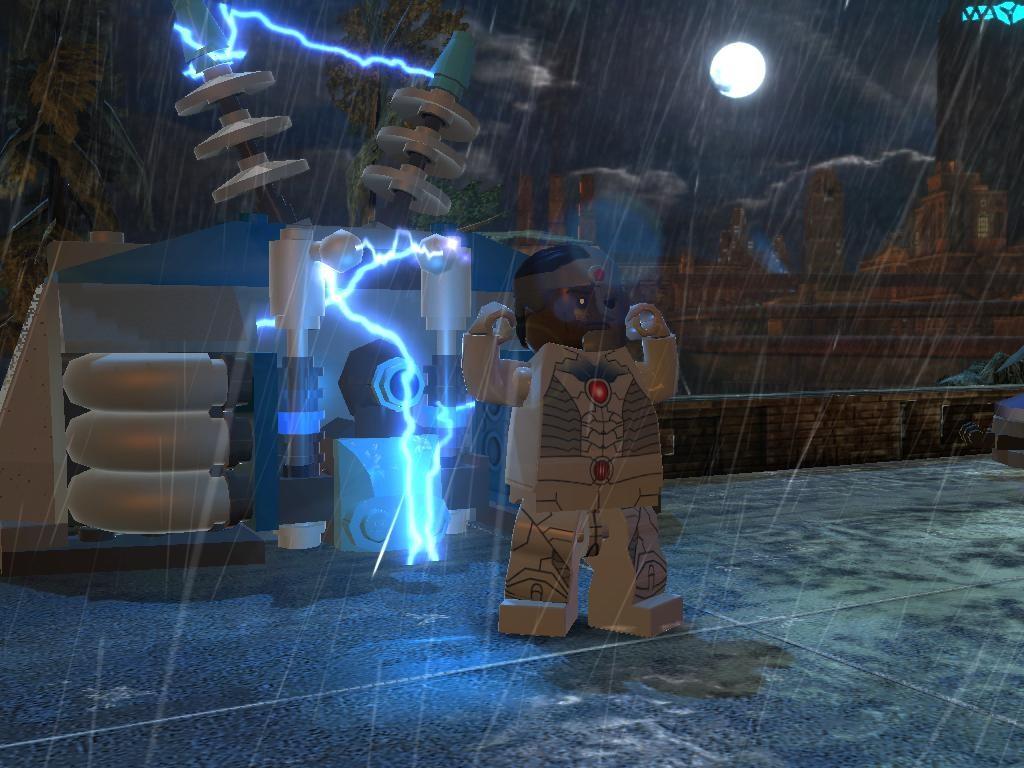 The puzzles are largely the same from one level to the next, requiring Batman and Robin to switch suits in order to turn invisible, shoot rockets, glide, do acrobatic stunts and much, much more.  Solo players will have to not only switch between costumes, but also change characters from one moment to the next.  Your typical puzzle revolves around one character creating a path for the other, be it assembling a ledge, blowing open a door or sneaking past an especially nosey surveillance camera.

Once you've completed a stage, you are able to go back and play through it again.  This time around you can bring in any of the additional characters you've earned and unlocked.  These DC universe players are both heroes and villains, each with their own set of special attacks.  For example, Aquaman is able to shoot water to clean up toxic puddles, the Joker can open electrified doors and Mr. Freeze can, well, freeze things.  Perhaps the most useful hero is Superman, who is able to simply fly over a lot of the puzzles.

There are fifty extra characters in all, many of which are just waiting to be found in Gotham City.  It's not just the most popular Justice Leaguers here (though they all show up before the end of the game), but rather rare treats like Supergirl, Mad Hatter, Captain Boomerang and the Black Canary.  If those heroes are too powerful for you, why not try your luck fighting evil with Vicki Vale or Lois Lane?  And just for the collectors, you'll also have the ability to pick up some of the regular bad guys, such as the LexBot and the Joker's henchmen. 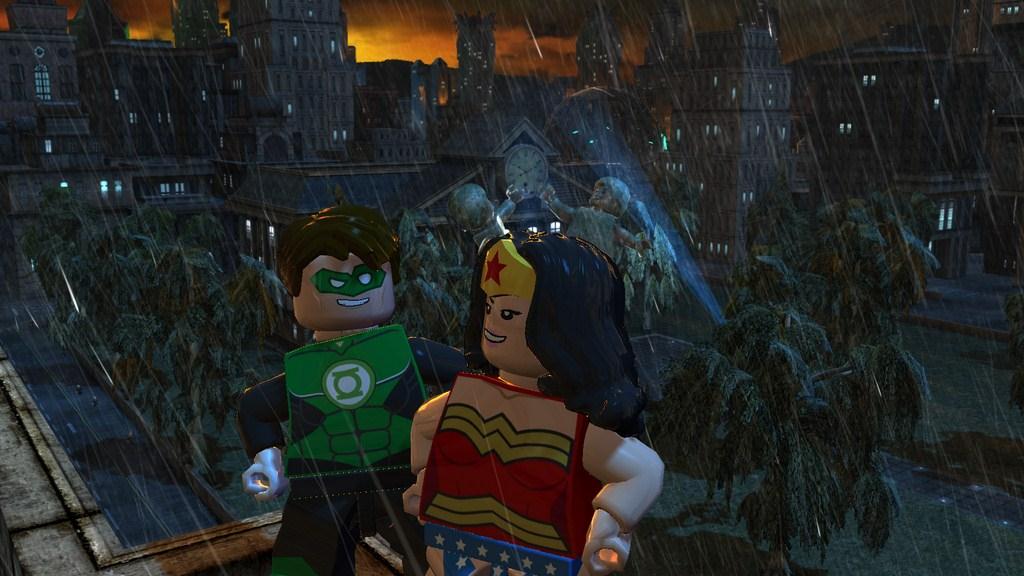 Sadly, the game's greatest weakness isn't kryptonite; it's the fact that everything is so simple.  Yes, this is a game for kids, but that shouldn't mean that the game lacks all sense of challenge.  There's almost no penalty for dying, especially late in the game when collecting LEGO parts is no longer a concern.  Get hit a few times and you'll respawn at practically the same location.  Even the puzzles are as basic as you can make them, which makes me wonder if anybody if honestly challenged by the puzzles.  Back when I was growing up we had Batman on the Nintendo Entertainment System, a game whose difficulty wouldn't let up.  It makes me wonder if game companies are underestimating the abilities of today's youth.

Even with the low difficulty, there's still a lot to do and see in LEGO Gotham City. This is the first LEGO game to include a large open world, which gives the developers a chance to add mini-games and events in the world.  You get the usual races and boss fights, along with 250 gold bricks to collect.  Although the boss fights are flashier, it was collecting the gold bricks that proved more satisfying.  Usually this involved some sort of puzzle to solve or obstacle to overcome.  These are bite-sized bits that showed the promise of this Batman sequel.  Like everything else in the game, these mini-games become repetitive after a short amount of time.

The presentation is also something of a mixed bag, with the music of John Williams and Danny Elfman stealing the show.  Despite being the twelfth game in the series, LEGO Batman 2 isn't a very good looking game.  There are glimpses of beautiful graphics (such as the level when you climb up a destroyed Wayne Tower), but for the most part everything is muddy and pixelated.  Superman's cape has large blocks of discoloring and the world tends to pop-in at just the last second.  This might be more understandable in a game like Grand Theft Auto IV, but not when the world is so small and very little is happening on screen. 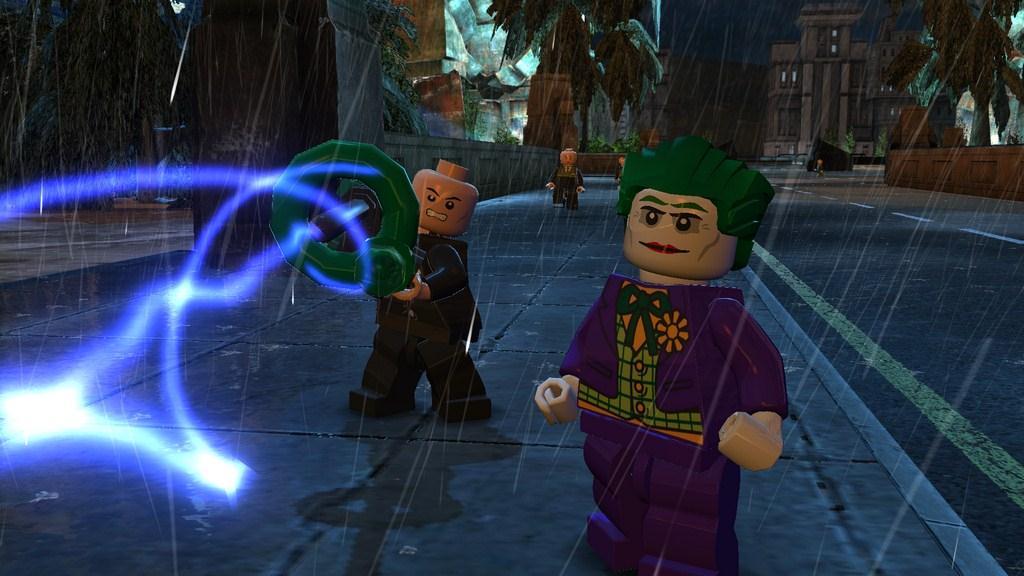 On the other hand, the music is gorgeous.  Instead of recreating music for this specific game, Traveler's Tale opted instead to simply recycle the music from older Batman and Superman movies.  You get John Williams' iconic Superman score, as well as music from the Tim Burton-era Batman films.  Even the voice acting (yes, this LEGO game actually features voice acting) is solid, using a number of cartoon veterans to bring these characters to life.  Sadly, Mark Hamill doesn't reprise his role as the Joker.

LEGO Batman 2: DC Super Heroes won't change many minds about the kid-friendly franchise, but it does offer enough content to keep gamers of all ages happy for quite a while.  Unfortunately the gameplay is a little too simplistic for its own good and we're yet again forced to take down the Joker.  Still, there are enough charming moments to recommend this to anybody who has already burned through Batman: Arkham City.

It's not a very deep game, but LEGO Batman 2 manages to charm with its open world and large roster. Fans of DC will love how many characters show up, while everybody else will have a good time taking down the Joker once again. Best of all, this game sets things up for the far more interesting LEGO Justice League adventure that is bound to be announced any time now!