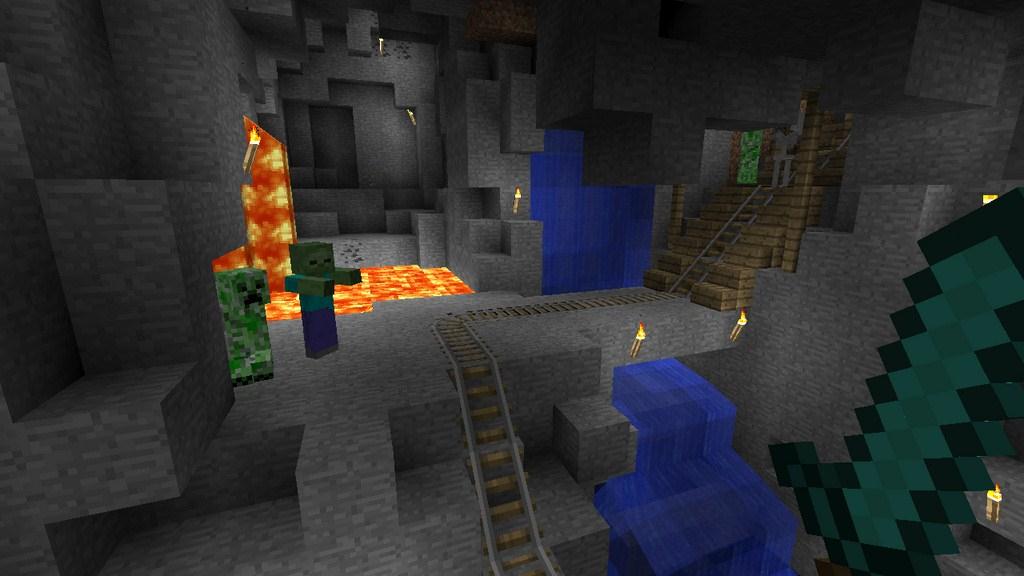 Written by Jeremy Duff on 7/13/2012 for 360
More On: Minecraft: Xbox 360 Edition
Unless you have been living under a rock for the past two years, you have undoubtedly heard of Minecraft. Maybe you haven’t played it but you have certainly heard the name. The indie project-turned-phenomenon from the mind of Markus “Notch” Persson took the world of video games by storm thanks to its innovative gameplay and an experience fueled and limited only by creativity of the user. After spending more than 2 years in the public eye in both its alpha and beta forms, the game was finally officially released on the PC in November 2011. Now, a few months after that, it has finally made its way to consoles, exclusively on Microsoft’s Xbox Live Arcade.

The world of Minecraft is more of an experience than it is a game. Set in a randomly generated, open world, you are given free reign of the world around you, and I mean that literally. You will  begin the game in the middle of nowhere; it could be an expansive desert, a snow-covered mountain, or a dense forest. It is just you and the expansive wilderness; you have no tools, no weapons, just a blocky world that looks more like an NES game than a Xbox 360 one.

What you have to understand is that Minecraft is what you make of it; this is a sandbox world that gives you the freedom to both explore and create. As I stated, you start with literally nothing except your bare hands but will eventually find yourself punching away at a tree because you can’t find anything else to do. That tree breaks into blocks of wood which can then be crafted into tools like a shovel, axe, or pickaxe; those tools than allow you to start chipping away at the world around you. Before you know it, you have dug down to the center of the earth (in the game world) in search of treasures and more materials.

In addition to creating tools, you can also use the various objects such as rocks and dirt to shape the world around you. This is the true joy of Minecraft: creating the world of your dreams. Just take a few seconds to search for “Minecraft city” on Youtube or Google, and you will see that this game is only limited by your own imagination. This is the true definition of a “sandbox” game.

Of course, this isn’t just a matter of tearing things down and building creations; there are dangers in the world around you too. The world around you is a lively one as well. There are a ton of creatures roaming around the world such as cows, pigs, sheep, ducks, and even wolves. They all serve a purpose in this blocky ecosystem and are the source of their own unique materials for your creationary-existence. Cows give you leather which can be used to craft armor and clothes; pigs give you porkchops to cook and eat when you need extra health.

The world of Minecraft follows a very strict day / night cycle, and when the sun sets in this world, bad things come out to play. In the darkness of night, you will also have to contend with a variety of enemies who will hunt you down. You can hide underground or inside of a sheltered structure that you have created (which is highly recommended early one) or take some materials and craft weapons to defend yourself. The choice is yours. 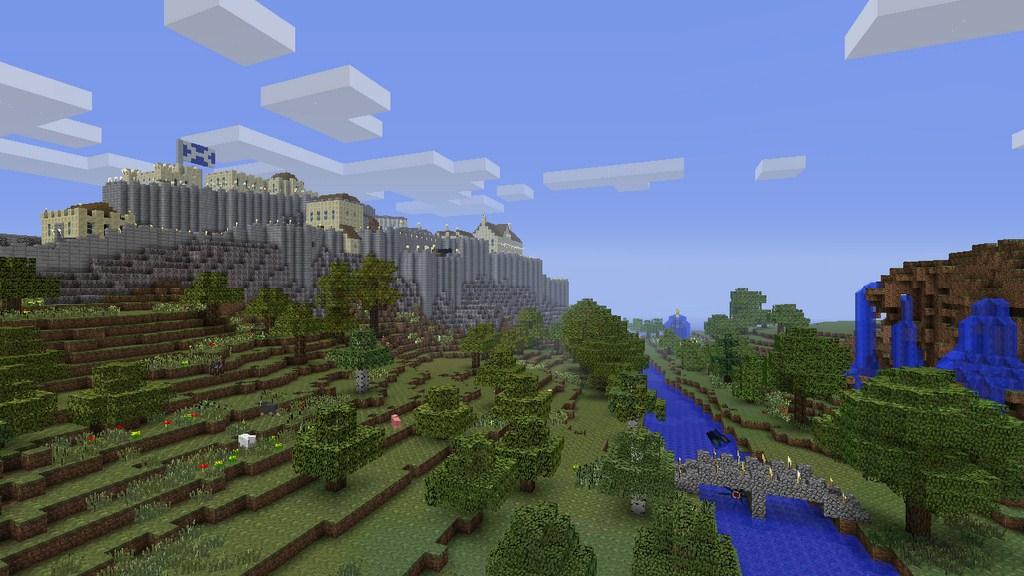 Being someone who spent quite a bit of time with the PC version of the game, I will say that the XBLA version has lost a bit of the luster and magic of the PC version. Players should know from the start that this version of the game isn’t the exact same as its PC brethren. The XBLA edition of the game is a few “updates” behind the PC release, although the two will eventually sink up according to the developers. The XBLA release lacks such features as the experience system and the existence of non-playable characters. These really don't impact the overall experience though.

What does hurt is the fact that part of the original experience was in the joy of the undiscovered world and its crafting system; those playing the game had no idea what they could craft or create within the game. It seemed as if the possibilities were endless and new creations could be discovered the deeper you dug into the ground, literally. Unfortunately, that joy is gone in the XBLA game. All of the recipes and options are laid out to you from the start; there isn’t any need to experiment, you just need to scroll through the list of objects that you can craft and find the required materials. 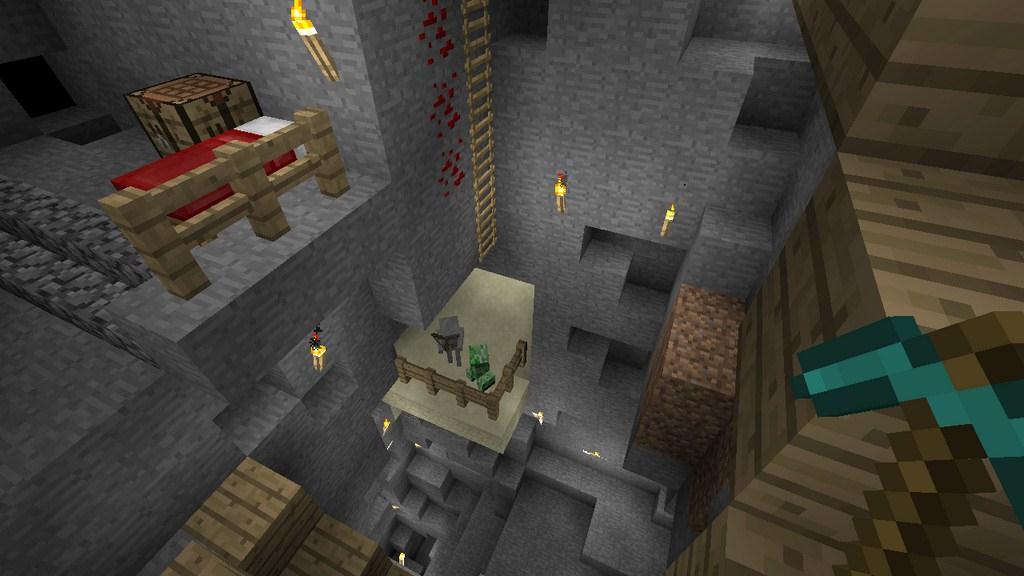 On the other hand, as a seasoned player I like having quick access to the various recipes and item combinations rather than having to either memorize them or reference an online guide. This makes it very easy to mass produce things such as planks and tools which saves time and let’s players get back to crafting a world of their own. Don’t get me wrong, the experience is still enjoyable, I just question whether or not those completely new to the series will see the same magic that many of us have been seeing for years.

Of course, what good is creating a world of your own if you can’t share it with your friends. Minecraft allows you to do just that. The game supports up to 4 players, both online and off with split-screen multiplayer (online only for those with standard definition televisions). You can either bring friends directly into your game via invite or leave your world open for other random players to join you; whoever hosts the game is the one who maintains the rights to the created world. This is also something that is a bit of a drawback from the PC version, as there a world could be saved on a server and those partaking in its creation could come and go as they please. I am not sure how they would have accomplished that on the consoles.

Minecraft XBLA, just like the original, is a truly magical experience. It is a very hard experience to describe as it will vary for each individual. If you don’t have a creative bone in your body, and don’t care to sink time into creating your own world, you will grow bored very (VERY) quickly. If you do have the knack, or even just the urge to create your own world, there is no better way to do it than with this game. It’s simple and easy and as I have stated time and time again, limited only by the bounds of your imagination. This game redefines the definition of both sandbox gameplay and the concept of replayability; assuming you put in the time, you won’t find a better gameplay value for your dollar. As long as you know what to expect, don’t hesitate on picking this one up.
Minecraft on the Xbox Live Arcade is an addicting and rewarding experience, assuming you are willing to put the time into the experience. This is one of those games where you will truly get out whatever you put into the game, and that can be both good and bad. If you put in the time and dedication though, you will discover one of the most enjoyable gaming experiences ever.